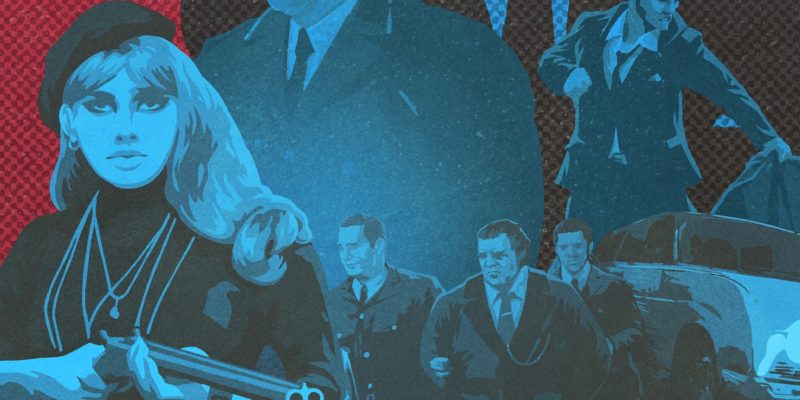 ‘Ere, me old china, can I get a quick word in your shell-like? There’s this new game in town: Company of Crime. I’ve given it a bit of a butcher’s, so let’s get out yer drum and head dahn the cruiser, and I’ll fill you in.

Right, that’s enough of that. I was going to write this entire thing in both dialect and Cockney rhyming slang, but looking out of the corners of my minces, I can already see the copy editors sharpening their knives. Company of Crime has given me enough virtual brutality that I don’t need to experience any in the real world. At least this time I have an excuse to use proper British spellings, although I’m sure they’ll edit those out too. Pillocks.

So let’s quickly move onto the game itself. Company of Crime is a turn-based tactical combat-’em-up set in the swinging London of the 1960s. Guy Ritchie’s anachronistic XCOM, if you like, where instead of soldiers, cities, and aliens, we have gangsters, nightclubs, and coppers. It’s up to you whether you want to take the reins of a rising criminal empire or stamp out crime as an officer assigned to the Flying Squad. 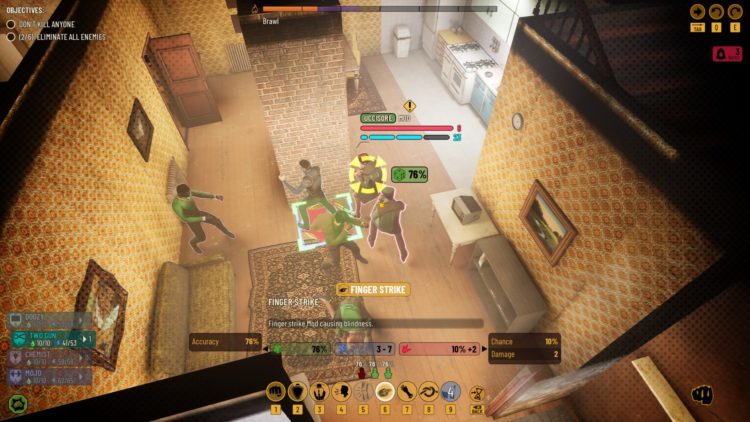 Barring the style, which definitely deserves a lot of words, the most interesting part is the way it handles tactical combat. See, while this resembles XCOM in so many ways – the perspective, the interface, the fact that each unit has two action points per turn that you can use to move or attack – it differs from it hugely in one major respect. Gun combat isn’t a good idea.

Which makes an awful lot of sense. If you’re playing as the rozzers, you want to arrest people so you can get evidence and information about other criminal hangouts. And if you’re a gangster, then using guns is a really good way to very quickly attract a very heavy and very angry police presence. Guns are, barring a few missions and events, a last resort. So melee combat is the order of the day.

And to Company of Crime‘s credit, it handles this pretty well both in terms of aesthetics and mechanics. You don’t just “punch” people. You can grapple them, kick them in the bollocks, or poke them in the eyes. You can fling beer bottles at them, smash a chair over their head, or hurl them over a table. You can even hurl insults or threats to inflict different status effects. Units have a zone of control; enemies entering or leaving that trigger an attack of opportunity. But position matters a lot, so deciding whether to risk getting clobbered just to flank a foe is theoretically an interesting tactical decision.

In the company of crime 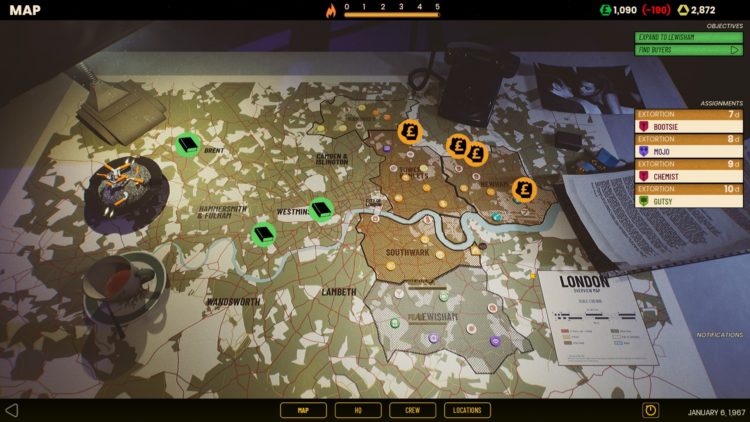 Watching the items on the desk change as time passes is weirdly satisfying.

All of this culminates in some truly beautiful chaos. There’s a real sense of a ridiculous bar fight in most of these brawls, with bottles sailing through the air and people being flung left and right. Just, uh, in what’s almost stop-motion, considering the turn-based nature of the thing.

This delightful visual spectacle extends even as far as the world map. Company of Crime has a strategy layer, too, where you pore over a map of London and plot out robberies, extortions, and takeover bids. One of my favourite little things about the game is the way this animates as time passes. Cups of tea appear, are drained, and then vanish. Ashtrays fill up with cigarette butts and are then emptied and replaced, all while a slightly tinny radio bangs out music with interruptions from a very ’60s-ish DJ. It’s a tiny thing, but it evokes the period incredibly well.

And… this is pretty much where I run out of good things to say about Company of Crime. The melee combat? Actually has some good, clever design elements. The style? Smashing and evocative. The gameplay? Er. Well. Um. It’s not bad, but it’s hard to call it anything more than mediocre.

I can’t get no satisfaction 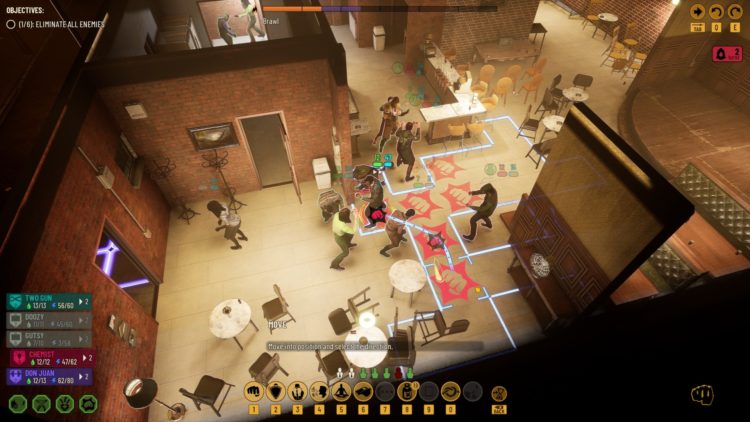 Lack of cosmetic customization and some visual choices can make multi-person fights a little… busy.

The first and arguably biggest problem is the AI. It is, to put it mildly, unbelievably thick. In tactical combat, it will routinely make incredibly poor decisions that give you an advantage that you simply should not have.

The AI won’t think twice about spending one action running through your zone of control (taking four hits in the process) and then its next action running back to where it was, taking twice as much damage. It’ll grapple — which does no damage and just disables a unit — when it’s the only unit around, and adjacent to three of yours that can retaliate. When it’s in a defensive position where only one of your units can reach it, it’ll Bull Rush into the center of the fray, opening itself up to immediate destruction.

Putting it bluntly, Company of Crime‘s AI makes a lot of questionable decisions. There’s no real feeling of outsmarting a cunning opponent. Half the time, it’s more like extending your arm and waiting for the game to merrily charge into your fist.

Worse, this means most of those abilities your units have are pointless. While a well-timed gouge or nut kick can be useful, it’ll almost never make or break a fight because you’re just not in that much danger. Abilities that reposition or lock down a foe can be helpful, but for the most part, you can happily hit “melee attack” over and over again until you win. 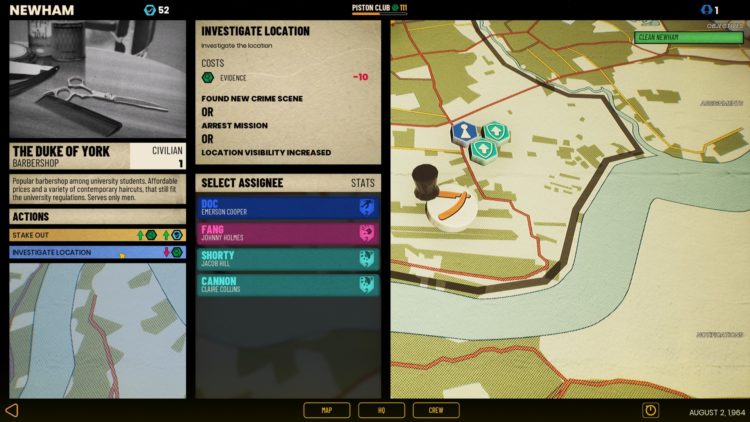 Lots of options, but unfortunately, most of them don’t matter too much. You’re not scrambling for resources as with XCOM.

The strategy layer of Company of Crime doesn’t fare much better. You’re following a reasonably strict campaign with more regions of London opening up as you complete story missions, while taking over and extorting businesses along the way. Interestingly, every business also has a unique tactical map; no randomization here. If you pop into the Tiger pub to cause a bit of a ruckus, then it’ll have the same building layout as when you’re defending it from a police raid or performing an all-out robbery.

It’s a neat idea and one that doesn’t work in practice because of the amount of repetition involved. See, you have Fear and Respect in each region, and you need these to take control of businesses and raise your profile. To get Fear and Respect, you do missions like robberies. Often three times in a row. On the same map.

And then if you want to remove enemy control from that property, you do a Menace mission on that map. And then a Coerce Ownership mission to take it for yourself before someone else does. Resource management of money, influence, and police Heat play a role in the early game (extorting a place gets more resources, but ownership gets other bonuses) but by the middle of the campaign, you’re swimming in resources and can safely ignore any of these decisions. 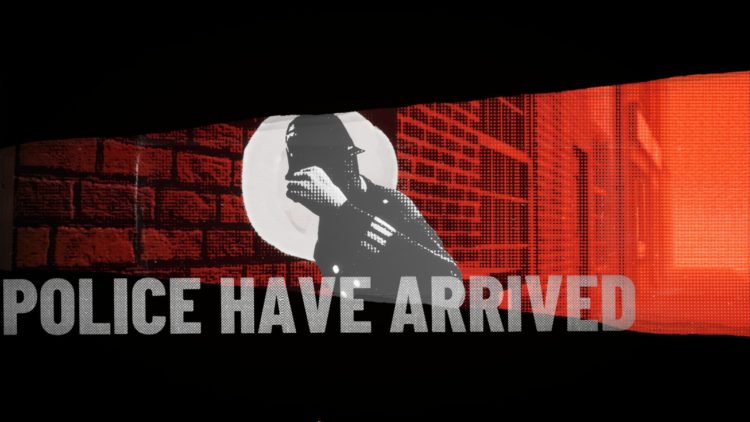 And that’s without going into the bugs. One map has squares that seem to have invisible walls on them. There are maps (and some unit bugs) that impact mission weirdly and occasionally make them impossible to finish. There are ability interactions that don’t actually appear to work as intended.

The police campaign avoids some of these issues and has its own neat mechanics in the overworld. You assign sergeants to patrol areas and raise safety, and to keep an eye out for criminal activity, which leads to tactical missions. It’s a more reactionary campaign that has less resource management, but it also feels like a bit of an afterthought and definitely not the focus of the game. Location descriptions are identical, even when it doesn’t make much sense. For instance, one pub is described as being disliked by Allie in both campaigns, even though Allie is one of the criminal campaign protagonists and barely appears in the police campaign.

All of this makes Company of Crime feel like less than the sum of its parts. It’s not bad, despite what the last nine paragraphs might indicate. It’s just a game where — after a little while — you can mostly ignore the resources and mash Melee Attack to win. Company of Crime has some genuinely clever ideas and does some genuinely decent things, but they’re overshadowed by AI problems and massive amounts of repetition. If you love the setting or the idea of it, I daresay you’ll get a fair few hours of fun out of it. Just don’t expect the next great turn-based tactical strategy game.

Right. Let’s scarper, before the copy editors notice I’ve sneaked in some more Cockney rhyming slang. They figure that out and I’m brown bread.

Some inspired ideas and a great sense of style, but repetition, bugs, and poor AI prevent Company of Crime from really coming at the king.