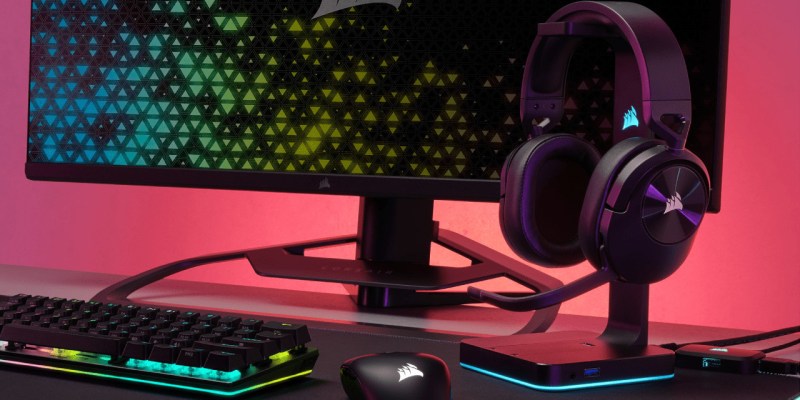 For a while now, Corsair has remained at, or near, the top of the PC peripheral food chain. Whether it be keyboards, headsets, mice, or otherwise, it’s tough to read through any “best of” list without seeing its products. The company is back again with another new product for review, this time targeting the mid-range gaming headset market with the Corsair HS55 Wireless Core.

As a $99 USD headset with scaled back features, the Corsair HS55 Wireless Core looks to be, on paper at least, something geared more towards those who want something simple that’s good on the go. Featuring 50mm drivers and a  20Hz – 20kHz response the aim of the headset is to provide quality sound at an affordable price, but how does it perform? Is it a headset that can compete for a top spot within the massive mid-range market?

A bit light on features

What you get in the box is pretty straightforward. Obviously, you get the HS55 Wireless Core headset itself, the 2.4GHz receiver, and a 1.8m USB-C to USB-A charging cable. Connecting the headset requires either the aforementioned receiver or a connection via Bluetooth 5.2. This allows it to be paired with pretty much any modern device given the widespread support these days for Bluetooth.

On the headset itself you’ll find a few options. The left side features the volume dial, a mute button, and the microphone. The right side has the power and Bluetooth buttons. There’s no RGB on the headset, just the Corsair logo on the side of each ear cup.

Speaking of the ears, this is a headset that is admittedly made for those with small-to-medium sized ears. Those with larger ears are likely to find it to be a tight fit that can be uncomfortable.

One major positive is just how light the headset is. Weighing in at just 266g, it’s pretty easy to put the headset on and somewhat forget you’re even wearing it. You don’t get that weighed-down feeling that other headsets give off after hours of use. It’s comfortable enough as a whole that you can put it on, lounge back, and relax.

The mic itself features a flip-to-mute functionality that’s nice for quick muting when you don’t need to talk. What I find odd is that the headset also includes a mute button above the volume dial. It does the same exact thing as the flip-to-mute. It would be better suited as a volume mute button as opposed to a mic mute.

Another lacking feature with the HS55 Wireless Core is iCUE integration. The only real integration is connection to the 2.4GHz receiver, which it already connects to automatically. So, unless you have a third-party audio equalizer, you won’t be able to set custom sounds with the headset. What it does offer, however, are four presets that can be selected by pushing the volume dial.

As mentioned, the HS55 Wireless Core features Bluetooth 5.2, allowing it to be connected to your computer via the receiver and your phone at the same time. This is nice for not missing calls when you are in the middle of a game session and wouldn’t be able to hear your phone otherwise.

How does the Corsair HS55 Wireless Core perform?

All the features on the headset are nice, but the biggest question is how does it perform? In my opinion, it’s a mix of strengths and shortcomings.

The audio itself sounds great for a mid-range headset. Obviously, you shouldn’t expect to get the same audio quality that a $400-$500 USD headset would give you. But that doesn’t mean the HS55 Wireless Core is a slouch. Music, movies, and games have a nice warm sound to bring everything to life. Even without the ability to have surround sound, I still found the sound in games like Escape From Tarkov and Insurgency: Sandstorm to be just as good as when I’m using my usual speakers. It also does a nice job of keeping noise from the surrounding environment out of your ears because of how snug the ear cups sit.

While listening to music, I decided that was the time to test the range over both Bluetooth and 2.4GHz. On the box, range is advertised as 50ft over 2.4GHz, and 30ft over Bluetooth. The range using the receiver was accurate, as I was able to walk around my home with no issues. Bluetooth, on the other hand, cut out with interference quite often. It’s best to use the receiver if you want to be further away from your computer for whatever reason that may be.

Moving on to the mic, I was pretty disappointed. The sound is clear enough, but it just feels a bit too condensed for my liking. In fact, it made my higher-pitched voice sound deeper than what other mics do when recording. It also isn’t the best at filtering out ambient noise, meaning you’ll pick up every click of the mouse, tap of the keyboard, and whatever other moderate background noise you tend to have.

Lastly, we must mention the battery life. Corsair advertises a  24-hour battery life for the HS55 Wireless Core, but I found it to be more in the 18-20 hour range. That said, that’s not a bad lifespan on a single charge. Besides, it charges fast enough that you’ll be up and running again for hours again in as little as 30 minutes.

Like I said earlier, the Corsair HS55 Wireless Core yields mixed results and feelings. This may not be a headset you’d use for livestreaming or podcasting, but it’s certainly not a bad one for the money. The features it has provide useful multi-device functionality, which is great when traveling or wanting just one headset at home.

Whether gaming, watching a movie, or listening to music, the audio quality is solid despite the lack of custom EQ options. The mic could be better, and the redundancy of the mute function doesn’t make much sense to me.

If you are looking for something more affordable that you can just buy, open, and use right away without any issues, the Corsair HS55 Wireless Core might be what you’re looking for. If you want more features from your headset, though, look elsewhere.

The Corsair HS55 Wireless Core has solid sound quality and is quite comfortable, but lack of EQ features and a mediocre mic hold it back.