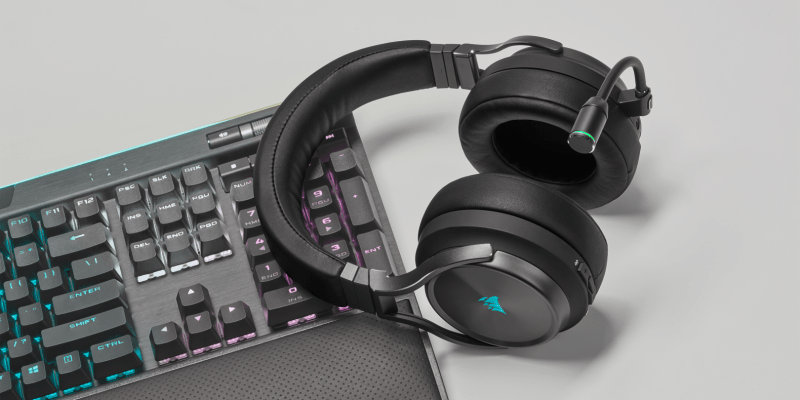 Comfort and sound quality are the two biggest elements for any new gaming headset on the market, and Corsair has made sure both of those items are checked off the list with the new Virtuoso RGB Wireless XT gaming headset.

Retailing for $269.99 — I know, just breathe — the Virtuoso XT is Corsair’s new flagship device. It’s a headset that boasts pretty much every feature a high-end PC gaming headset could offer. But is it really one that warrants such a high cost, or are there better options available for your money?

High quality for a higher price?

For the price that you have to pay to get this headset, one should expect the build quality of the Virtuoso RGB Wireless XT to be top of the line. Thankfully, that’s exactly what you get here from Corsair. Everything about this headset feels premium. Whether holding it in your hands or wearing it on your head, you know this is meant to be a top-level gaming device.

From a comfort level, the Virtuoso XT feels a lot lighter than it actually is. Weighing in at 382 grams (.84 pounds), it feels like something about half that size. I don’t know whether it was the lightweight aluminum used in the build or the way it sits on the head, but there are times where you may forget you’re wearing it. Even as someone with slightly larger ears, the thicker and larger ear cup padding combined with less pressure on the head makes for a more enjoyable wear, especially during longer sessions. 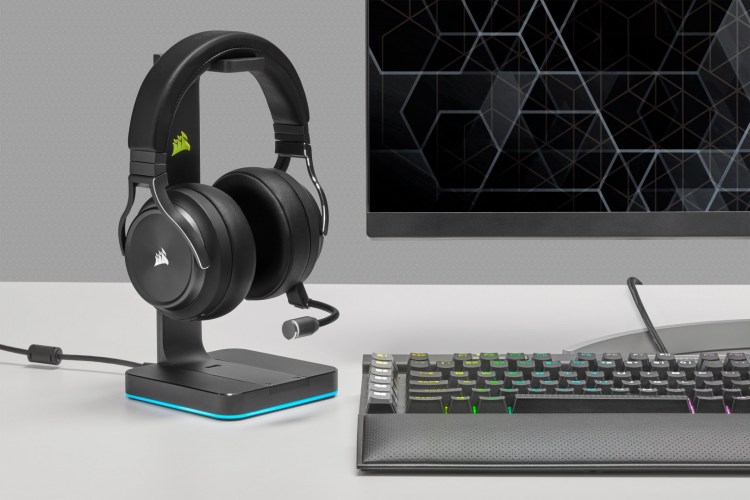 It’s not just the headset itself that showcases the high-level quality Corsair has put forth. The Virtuoso XT comes with a braided USB-C cable that acts as both a charging and connection cable, a braided 3.5mm audio cable with an in-line control to let you hook up to your Xbox or PlayStation controllers, and a 2.4GHz adapter for wireless PC connection.

Lastly, like with the previous Virtuoso SE, Corsair gives you a stitched cloth carrying case with a magnetic clasp for safe storage and travel. Seriously, I don’t even have my laptop in a case as nice as the one you get from Corsair.

Feature heavy with a sound to match

Corsair’s battery claim states that you can use the Virtuoso XT nonstop for up to 15 hours at a time. Though I didn’t get a straight 15-hour play session with it — having two small children will curb that — the battery life claims were legitimate. At least, if you connect to just one device. If you decide to have both a Bluetooth and 2.4GHz connection, the battery life will be shorter. When trying this, I was getting about 11 hours max before needing to let it charge. It’s not the greatest, meaning you may need to charge it every day or night when you aren’t using it.

The best part of the dual connection is that each connect has its own volume control. You can have your Bluetooth connection be set to a specific volume level while your PC or other device is set to something completely different. It’s great for those who want to use it as a headset for their phone and PC at the same time.

The omnidirectional microphone is attached to the headset via Mini-USB, which may come as a surprise to some users. However, it doesn’t change any of the sound quality and is a more stable option for removable accessories like this.

Out of the box, the microphone quality is pretty clear. In fact, you’ll be able to get away with not messing with any audio settings before using it as your content-creation mic. I just wouldn’t recommend trying to use it for singing…it won’t end well.

Audio settings, by default, are set by Corsair’s iCUE software. After making sure you are using version 4.0 — the headset won’t be detected without it — you can manage all of the settings the device offers. From the equalizer to the time the headset goes to sleep, iCUE will be your best friend. But that doesn’t mean it’s the only option for sound.

To get a more realistic sound, Corsair has implemented Dolby Atmos spatial audio. Available for Windows 10 users only, this feature brings the audio to life in a way that’s pretty tough to achieve. The software detected the headset immediately and has quick and simple presets to improve the in-ear sound. If you don’t like any of the presets, you can quickly adjust the equalizer to what you’d like.

Personally, I find myself using Dolby Atmos more than iCUE to handle my audio when I’m playing games or watching movies. It’s just a nicer overall sound. Obviously, that’s completely subjective and everyone will have their own preferences. 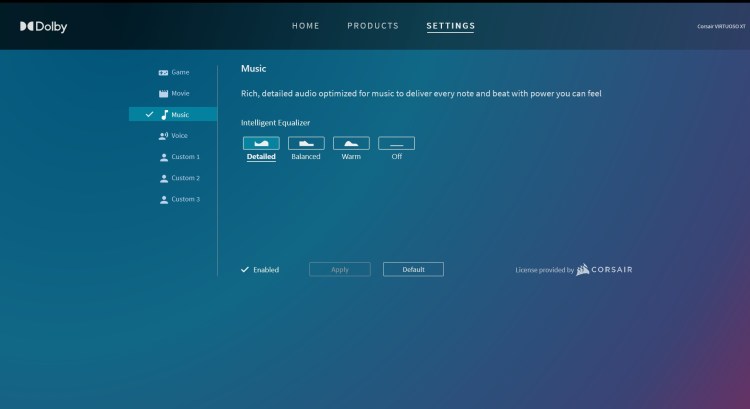 RGB management is also handled via iCUE, and it works exactly as you’d expect. You can adjust the color of the subtle logos on the headphones to match your setup. There’s also an LED indicator at the end of the microphone to let you know if you’re on mute. If you find the white or green light and the end of the mic bothersome, iCUE allows you to turn it off when it’s active.

The range of the Virtuoso XT can also be a bit disappointing for some. I’m someone who paces a lot when I’m on meetings and other calls. I usually end up in my driveway, backyard, or somewhere else in my house, meaning I need quality range. For the most part, Corsair’s Slipstream Wireless technology works and keeps my headset connected, but it does cut in and out more often when I’m on different floors of my home. This, unfortunately, is a stark contrast to that of my Logitech Pro X Wireless headset that allows me to switch laundry in my basement while being on a call on my PC on the second floor without hiccups.

That said, most people aren’t weird like me and pace endlessly. If you want to be able to walk into another room every now and then but keep listening, you should be fine.

From a more nitpicky standpoint, I would like to be able to have the attached microphone on either side of the headset. But due to the various controls and ports on the earpieces, it’s understandable why it’s not available.

The real Virtuoso (XT) of the gaming headset market

Whether it’s quality or price, the Corsair Virtuoso RGB Wireless XT headset is anything but cheap. The headset feels sturdy, it withstands the grip (or lack thereof) of a three-year-old, and has sound quality that matches that of premium audio-only headsets.

Being able to connect to two devices at once while also having separate volume controls for each is a major selling point, and the included Dolby Atmos license is a nice incentive. At the end of the day, the Virtuoso XT is the best headset I’ve ever used. Whether it’s watching a movie or diving into Escape From Tarkov raids, there’s nothing on the market that can beat the sound it offers.

The price may scare plenty of people off, but those who do decide to spend the $269.99 won’t regret it.

The Virtuoso XT is a comfortable and high-quality headset that delivers elite-level sound and functionality for every type of user. Just be prepared to pay a pretty penny for all it offers.

New Back 4 Blood trailer invites you to ‘meet The Cleaners’