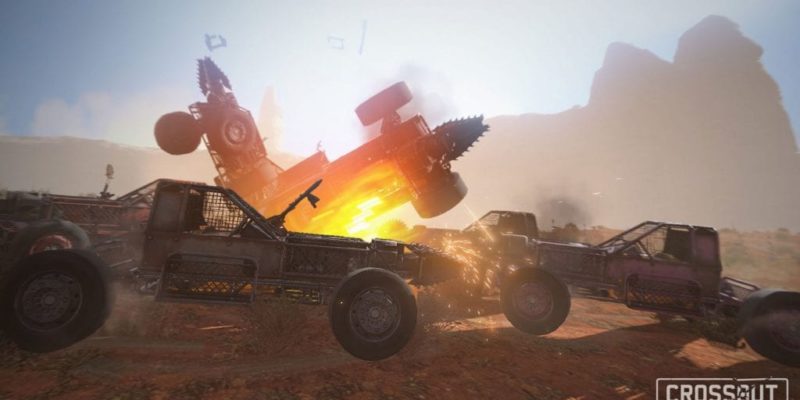 It was only a matter of time before another game jumped on the Battle Royale craze and this time its Gaijin with their vehicle combat title Crossout.

The new PvP battle royale mode, which has just gone live, features 32 v 32 matches on a new map called Blood Rocks. Players have to search for weapons and gear to improve their starting vehicle and ultimately become the last vehicle standing. The new map is sixteen times larger than a standard Crossout map and features caves, ruined buildings, and other obstacles and constructions.

Players start with a light buggy with no weapons or equipment and will have to head out to find weapons such as chainsaws, rocket launchers, cloaking devices and more.  Each vehicle can support up to two firearms and they are automatically equipped on pickup. This includes one melee weapon and auxiliary module and these can be swapped at any time for another weapon on the battlefield. Supplies such as ammo and repair kits can also be found dotted around the map.

Unlike normal Crossout battles, wheels cannot be shot out and vehicles have to be completely destroyed to take a player out of the match.

Crossout is free to play so if you want yet another battle royale game to play then head to the Crossout website.

State of Decay 2 gets a new gameplay trailer

By Jake Su33 mins ago
Industry