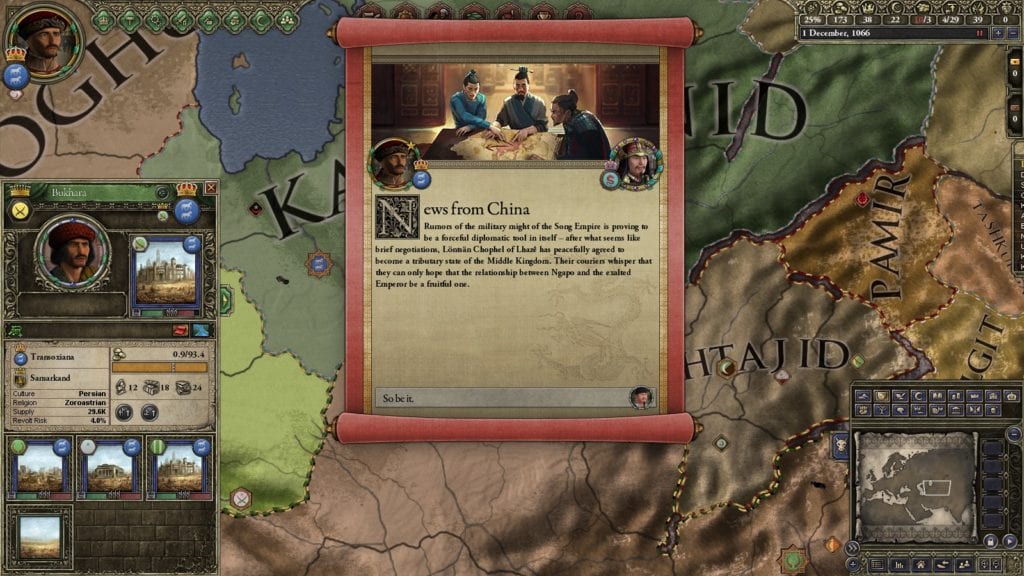 Jade Dragon, by my count, is the fourteenth expansion in the long, long reign of Crusader Kings 2. Every major game company in 2017 is falling over themselves trying to find the one true ‘game as a service’ model, and here’s Crusader Kings 2, still selling substantial new DLC five and a half years after its initial release.

It’s impressive that there are still aspects of feudal life (and, inevitably, death) left unexplored at this point, but Jade Dragon manages to delve into a previously untouched realm: China. Being off-screen in the world of Crusader Kings 2 is probably the main reason China has been ignored up to now; but if ever a game were suitable for incorporating a load of off-stage meddling, it’s this one.

Sorry pal, got to keep the Emperor happy.

To get the most out of Jade Dragon, you’ll want to start a new game somewhere in the eastern portion of the map. That actually tosses up an interesting wrinkle, and one which links back to the now copious number of Crusader Kings 2 expansions. A significant amount of those kingdoms (and duchies, and so on) of the east are restricted by prior DLC. If you want to play as 90% of the Buddhist regions, you’ll need Rajas of India. The Middle East (close enough to interact with what Jade Dragon offers) generally requires Sword of Islam. Playing as one of the newly added Han dynasty requires a start date earlier than 1066; so that needs The Old Gods.

Now, chances are that as a Crusader Kings 2 player looking at a new expansion pack you’ll have at least one of those. If not though, you’ll have to make do with one of the handful of Taoist rulers, or perhaps the pagan Bon (another new religious addition) of the Sumparu kingdom.

Choose anybody within range of the famous Silk Road trade route and you’ll be interacting (indirectly) with China’s Emperor through a separate menu screen. Here, you can offer the Emperor various gifts in return for ‘Grace’, which, in turn, can be spent on requesting certain favours. Alternatively, you can risk the nation’s wrath by sending raiding parties to plunder their vast (again, off-screen) lands.

Possibly not the greatest idea for my fledgling kingdom.

The Emperor will respond to high-quality artifacts, and, funnily enough, eunuchs (if the character’s stats meet the desired expectations). This latter indulgence doubles as a pretty useful way to get rid of a troublesome male character from court. Your ruler can also choose to head on a personal mission to China to kowtow to the Emperor. This works in a very similar way to the pilgrimage event chain, but is in-keeping with the flavour Jade Dragon is trying to add, and can earn you some useful rewards along the way (as well as the additional Grace).

If you want to invite a steady stream of Grace, you can opt to become a Tributary. You’ll earn Grace every month and receive a handy set of Chinese troops, but at the cost of half your income and a rather hefty four prestige per month. After all, you are submitting your sovereignty.

That could ultimately still be beneficial, however, because China’s boons are extremely useful. With enough Grace, you can request an exceptional siege engineer commander to lead your armies (and halve besieging times), or, at the very summit of the list of favours, ask China to invade somebody on your behalf. That’ll set you back 5,000 Grace, but is guaranteed to wreck the opposition. Peace treaties, trade contracts, and Imperial marriages are also among the very helpful gifts Jade Dragon can bestow on your kingdom.

I’m sure me and my urchin soon-to-be bride will enjoy this a lot.

This expansion also adds some neat changes to the way the Silk Road functions. It’ll boost income in any province it passes through, and even more so if you build a Trading Post there. Disruptions along the Road can redirect more trade your way, so if you were feeling deliciously devious you could try to engineer conflict that would directly benefit your own trade regions.

Trade along the Silk Road is highly dependent on the current goings-on in China. If there’s unrest in the country, it will affect revenue. If the Chinese Emperor decides upon a policy of isolationism, then the trade tap is shut off completely. Naturally, this can cause a pretty significant economic crisis in any kingdoms relying on the Silk Road to fund their expenses. Like so many of the somewhat arbitrary events in Crusader Kings 2, these circumstances act as a novel challenge to your dynastic powers.

That’s pretty much it for the China-specific parts of Jade Dragon. The rest of the DLC’s rather steep $15 USD asking price rests on an expansion (reportedly eight more, though at least one of those is included in the free patch everybody gets) of the Casus Belli system. It’s always useful having more justifications for expansive wars, so being able to nab some territory under the guise of something like a Border Dispute (which acts rather like a ‘just pay some money to act now’ alternative to Fabricate Claim) is definitely useful. So useful, in fact, that you may suspect they’re purely being used to sweeten the pot for those who aren’t quite as interested in playing an eastern kingdom.

China has quite the reach, as you can see.

As always with Paradox’s flagship titles, Jade Dragon launched alongside a general update patch for the main game. I won’t delve too deeply into that as it’s external to the DLC itself, other than to say that fans of animals in high office will be pleased with developments on the supernatural front. Glitterhoof now has rivals for that Papal seat.

Jade Dragon takes a slightly different approach from prior area-and-culture focused expansions for Crusader Kings 2, putting much more emphasis on off-stage activities than making new realms playable. That means the bulk of this DLC takes place through menu interactions, but I think Paradox has done a good job fashioning an engaging system out of this restriction. China is both a major threat, and a source of great (potential) personal power for those rulers within its influence. If you have little interest in playing an eastern-located realm, or lack any of the DLCs mentioned towards the start of this review, Jade Dragon is less compelling (those Casus Belli are nice, but won’t justify the purchase on their own). Otherwise, this expansion does a fine job re-igniting interest in an area of the Crusader Kings 2 map outside the usual western Europe feudal suspects.

Jade Dragon is a touch pricey, and benefits from ownership of prior regional DLC, but its off-stage empire is a compelling enough reason to revisit the eastern portions of the CK2 map.