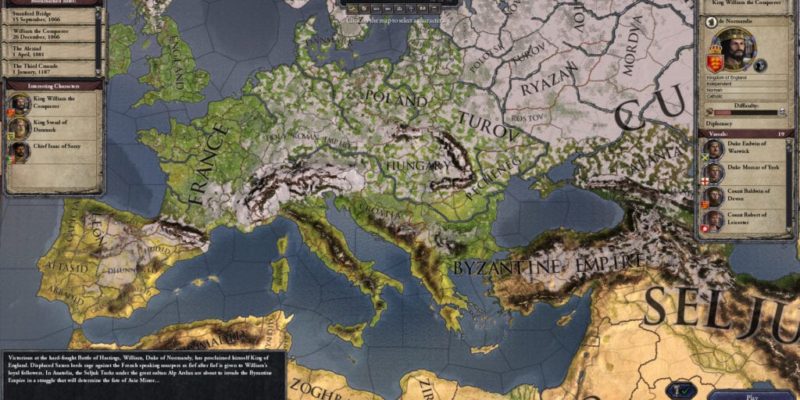 My brother wants to kill me, my sister wants to kill him and everybody’s upset that my wife had the audacity to give birth to a daughter. Still, at least she’s heir to the throne of Norway, which means I just need King Magnus II to have a little … accident. That will have to wait though, because I’m the vassal to a boy-king of France who keeps me in Paris training his toy soldiers for endless Holy War jaunts down in Iberia. Just the usual set of dynastic quandaries for Duke Folques IV of Anjou in Crusader Kings 2.

Although it’s masquerading as a ‘grand strategy’ title, Crusader Kings II is really part feudal-medieval soap opera and part abstract roleplaying game. It generates the same wealth of anecdotal stories as a game like Football Manager; except rather than feverishly explaining to semi-interested parties how you nurtured a talented youngster into Spain’s top striker, you’ll be regaling them with tales of maneuvering your infant daughter into a position to inherit the Holy Roman Empire.

The game spans the period 1066 AD to 1452 AD, featuring royal families and dynasties throughout Europe, parts of Asia (modern day Russia, the Middle East and the former Byzantine Empire) and Northern Africa. As with many of Paradox’s in-house titles you can opt to play as one of hundreds of characters (starting at any point between those dates), from humble counts to powerful kings and queens. At present it’s not possible to play as Republics, Pagan-faith characters or Muslim leaders, which is a shame, but it seems Paradox is busy planning some official DLC that will enable this. Given the number of playable characters left open, it’d be a bit much to frame this as a move designed to short change players.

Although you play one character at a time, you’re essentially in control of a family dynasty. No matter how important your selected noble is, the overall goal is to continue the lineage. If your current ruler dies (as tends to happen with relative frequency during these tumultuous medieval times), you will play on as your heir. Should you find yourself dead and with no heir, it’s game over.

Beyond that, goals are really your own to set. You might be happy just tootling along keeping your holdings at peace and raising your heir to be a fine, just ruler. That, however, makes you a boring sod. The best way to play Crusader Kings II is as an absurdly ambitious prick, who will stop at nothing to get his good-for-nothing brats into every major household in the land. And if that involves falsifying claims against other families and judicious amounts of assassination, so be it.

In my most recent game, the upstanding house of Anjou had a historical claim on the province of Maine in northern France, owned at the time by a vassal of Robert I of England (who’d succeeded William the Conquerer). Alone, my puny army stood no chance against English military might, but then fate smiled upon me as Brittany joined a foolhardy Cornish war for independence and William III of Normandy decided he quite fancied the English crown for himself. While King Robert was distracted and Maine was cut off, my troops ambled in and took the land.

All was going well until William III was smashed by the English forces and Robert’s troops began marching dangerously close to my territory. My army was outmatched and the province of Maine fell back under English control (battles are auto-calculated and nearly always decided by force of numbers). That is, until King Philippe of France noticed that one of his vassals was being slapped around by an English upstart and declared war, allowing me to reclaim Maine and present it as a birthday present to my one year old child. Thanks to my opportunism, I’d sparked off a series of events that pulled England and France into an all-out war in which hundreds of men would be killed for pretty much no reason. On the other hand, it resulted in my dynasty securing a little bit of extra land. Result.

No matter who you opt to play as, drama like that is inescapable. Someone, somewhere will always be plotting against you; whether it’s your sulky younger brother who wants to claim your title, irritated vassals who don’t like your tax rates or a foreign power questioning your devotion to the Pope. Every character in the game has a relationship value with every other, dictated by their actions and circumstances. There’s no pleasing everyone, so you’ll have to fight hard to keep your dynasty strong. Much like in Macbeth though, once the murdering starts it can be awfully hard to stop. There’s always going to be an angry son, brother-in-law or third cousin twice removed who’ll be thirsting for justice and revenge.

The stat-heavy presentation may look a bit off-putting (Crusader Kings II pushes most of its numbers to the fore, another trait it shares with Football Manager), but this is a title absolutely worth persevering with. Paradox veterans will have no trouble diving in, but newcomers may encounter a sharp learning curve while they adapt to the interface and weird terms like ‘casus belli’ (loosely translated as ‘a really good reason to steal your land’). The three-layered tutorial can look daunting in itself, but each section only takes a couple of minutes to go through and it covers the basics to a satisfactory degree.

In fact, Crusader Kings II is not only one of the more accessible of Paradox’s strategy titles, but also the most stable on release. Those who remember what Hearts of Iron III or even the original Crusader Kings were like immediately after launch may be shocked to hear this, but the game is fully playable in its current state. I’m not going to go nuts and claim there are no bugs, but nothing outside the ‘slightly odd, but no problem’ has cropped up for me (the AI being too keen to reject good marriages of alliance being one possible error that I’ve encountered).

Nor do I have any serious issues with the design or balance choices. The addition of ships seems a little needless (especially as they can’t fight or protect your shores at all), and it’d be nice if vassals could gain independence from their liege lords with a little more ease, but these are concerns of a thoroughly minor nature. A few more in-game events and a wider selection of devious plots to enact would be very welcome too, but, thanks to the openness of Paradox titles, modding such things to match personal tastes should be quite easy.

For a title that can appear so dry and fusty on the surface, Crusader Kings II is a constant source of dark comedy. Within a few game years you’re guaranteed to become embroiled in a scenario that’d seem outlandish on the most farcical of sitcoms. A new, absurd anecdote about your screwed up dynastic life is always around the corner, and dramatic failure can be just as fun (and funny) as familial success. Magnificent plots to legitimise Anti-Popes, disturbing arranged marriages to imprisoned siblings, multiple ex-wives who each want to kill you in gruesome ways; it’s all here, in glorious medieval detail. In short, Crusader Kings II is a majestic feudal sandbox, the greatest generator of hilarious medieval soap opera ever created and Paradox Interactive’s best title to date.