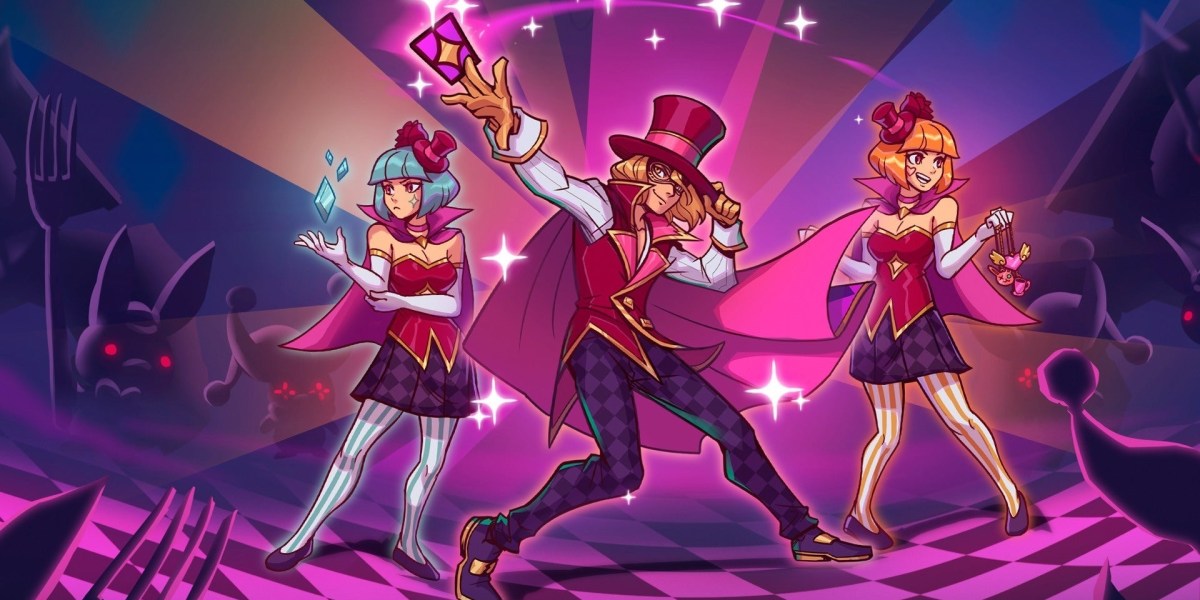 Dandy Ace is a roguelike developed by Mad Mimic. It was a crowdfunded project that failed to raise its initial goal of $25,000 USD, but was saved by publisher Neowiz. There have been past cases of early access projects falling apart after funding didn’t go as planned. Thankfully, Dandy Ace is not another example of that.

Instead, Mad Mimic has left us with a well-crafted roguelike that can compete with the very best the genre has to offer. You play as Dandy Ace, a famous magician who has been tasked with freeing himself and his two assistants from the bizarre palace they’ve been trapped in. By navigating through the palace and defeating the four bosses that await, Dandy will be able to return to his regular life.

Luck of the draw

To escape, you’ll need to collect cards that upgrade your abilities. These cards can either be found as drops from enemies or purchased with in-game currency. Dandy can carry up to eight cards at a time with four of them designated primary spells. The remaining four cards are used to grant secondary special effects to each of the primary spells. Dandy Ace has an impressive variety of cards, ensuring that you’ll remain engaged with the game for quite some time.

Card types vary from damage, stuns, area of effect, and mobility. Understanding how each card works and what situation they are best in is essential for putting together a good run. I enjoyed having to figure out what cards work best with each other. Some of the cards are far better secondary enhancers than they are primary spells. Learning what the strongest cards are then getting to work after figuring something out is easily my favorite part of Dandy Ace‘s gameplay. 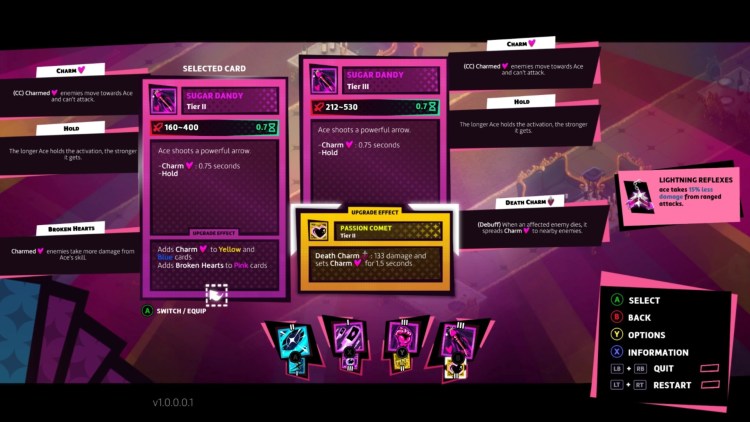 The beginning of each run can feel bland, however. Starting cards that the game provides aren’t overly interesting. However, once you get further into the palace, the abilities you can obtain begin breathing life into your adventure. My personal favorite ability to acquire is Packet Trick. When used, Packet Trick lays down a row of explosive cards. With good movement and prediction, these can be used to deal out some huge area of effect (or AoE) damage to several enemies all at once in a satisfying blast.

Since cards go on cooldown after being used, it’s important to make use of all four available slots. Many of the spells in Dandy Ace chain together and can used in a combo for optimal damage. A simple example of this would be engaging with a ranged attack, stunning the enemy, dashing through them, and then finishing them off with your primary spell. It can be a bit much to get your head around at first, but once you begin to understand the cards better, this becomes second nature.

While gathering more powerful cards is important, they are only temporary upgrades. Once you die you’ll start over again and have to put together a new deck. This doesn’t mean that every run starts over from scratch, though. With the help of your two assistants, Jolly Jolly and Jenny Jenny, you can also obtain long-term upgrades.

Jennyjenny’s trinket store is the less interesting of the two. By exchanging gold you can obtain various buffs that help to either improve your damage output or mitigate incoming damage. They’re cheap, but easy to obtain. The only requirement is that you reach the end of a floor, as that’s where the assistants dwell. Given that there are no real downsides to running these, it’s always worth purchasing one when given the chance. Some of the trinkets are objectively better than others, often resulting in me taking the same ones every run. It would be nice to see this store reworked a little to make the niche trinkets more viable. 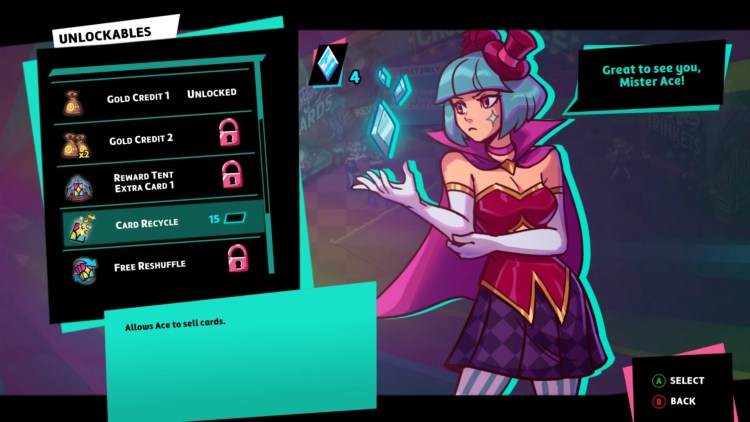 Her sister Jolly Jolly is the one with the good stuff. When you defeat enemies, there is a chance they’ll drop a crystal. These crystals can be handed into Jolly Jolly for permanent upgrades that are tied to your save. Some of these are game-changers, while others act as simple quality of life upgrades.

Purchasing upgrades from Jolly Jolly is the only way to make future runs easier. For most players, these upgrades will be required in order to reach the end game. Completing Dandy Ace without using these is difficult, but definitely possible once your skill and experience rises.

Speaking of difficulty, Dandy Ace is a fairly hard game even on standard difficulty. Those looking for a more relaxed experience may want to consider looking elsewhere. Although, if you are up for a challenge, you can try Nightmare mode where just about everything instantly kills you.

An explosion of color

It always seems to be indie games that impress me the most with their visuals. While the grandeur of realistic AAA graphics has its own appeal, nothing matches the beauty of a hand-crafted indie game.

Dandy Ace doesn’t disappoint. It’s a gorgeous game featuring an especially impressive use of color. Although the layout of floors can be repetitive, the art design is another story. They don’t get boring thanks to the diversity of their designs. I love the implementation of bold colors like neon pink and royal purple. These aren’t always the easiest to fit into an aesthetic, but look great when used properly. It helps differentiate Dandy Ace from the many good-looking indie games on the market. 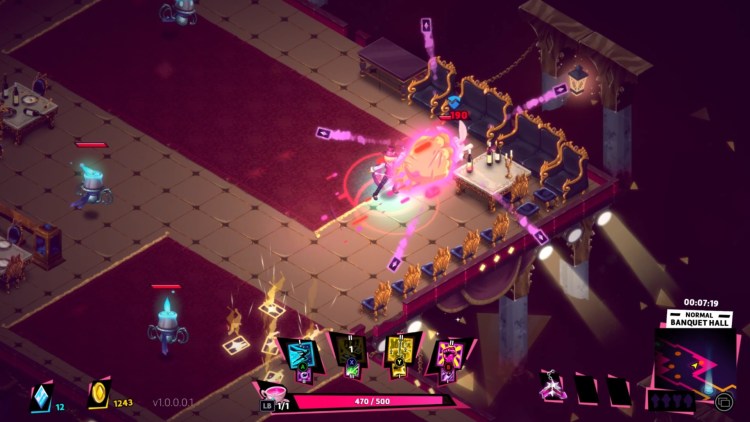 Performance-wise, Dandy Ace is nothing short of remarkable. The isometric viewpoint is never the most demanding, but I have seen developers not deliver the great performance I expect from it in the past. In contrast, Dandy Ace never dropped below my monitor’s 144Hz refresh rate during gameplay.

Even if Dandy Ace is a sprite-based game, you’ll still be able to run it well on older hardware. Anyone using a more modern or high-performance GPU should comfortably reach and stay at three figures for framerate. The higher difficulties do spawn more enemies which can negatively affect the performance a little. However, I never once felt that the performance was problematic even on the most demanding sections. This is fantastic for a mechanically demanding game like Dandy Ace. The last thing you want is to die because of something out of your control.

Since publisher Neowiz got involved and funded the development of Dandy Ace, the roguelike has gone from strength to strength. I have to give credit to developer Mad Mimic for not getting caught up with the result of the Kickstarter and focusing on what matters most: delivering a fun game.

Dandy Ace is fantastic. It’s not overly complicated, and some players may have wanted to see a little more in terms of gameplay diversity, but it’s still worth checking out. Its replayability is on the same level as other top-tier roguelikes such as Spelunky 2 and Faster Than Light. When it’s in the presence of games of that caliber, it’s hard to not recommend at least trying out Dandy Ace.

Dandy Ace is a sensational roguelike that can contend with the very best the genre has to offer. Although gameplay can get a little repetitive, its colorful visuals and well-thought-out combat mechanics more than make up for that. This is a challenging yet fun game that is well worth your time.