If you’ve read my reviews of the preceeding couple of installments in the Dark Souls 2 Lost Crowns DLC trilogy, you’ll know I’ve been impressed. Sunken King demonstrated a confidence in interconnected level design that rarely showed its head in the main game, while Old Iron King included two fantastic bosses and some neat expansions to the Dark Souls 2 narrative.

Crown of the Ivory King’s snow-swept ramparts take the idea of intricate, looping level construction even further, wrapping up the most consistent set of DLC add-ons I’ve played since Fallout: New Vegas in a suitably Souls-appropriate manner. 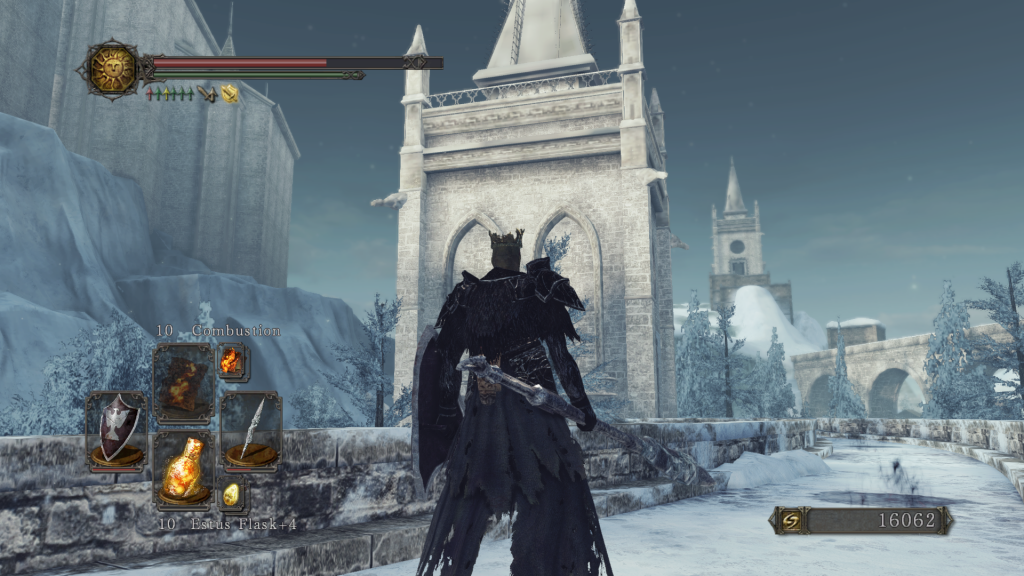 Like the Painted World of Ariamis, everything is all snow-swept.

The level layout is actually a step cleverer than Sunken King’s, as it manages to slowly unfold and connect in two stages. When you first arrive at the gates of Eleum Loyce, the castle in which Crown of the Ivory King is based, winds and snow prevent access to certain areas. This only becomes truly apparent later, but once the storm has been calmed even more passage-ways and battlements open up for exploration.

There’s a reassuring sense of Souls mystery the first time you tramp through Eleum Loyce’s frosty confines. From curious white-robed figures who seem to mope harmlessly in the slush (should you ignore them? kill them?) to a series of frozen treasure chests, there are plenty of questions that can only be answered by progressing through a DLC that’ll keep you second-guessing.

The structure of the level is such that you’ll be encouraged to partially repeat sections of certain areas, but forced by new conditions to approach them in a different manner. That’s quite vague, and deliberately so, but the point is the slight repetition is given purpose and feels rewarding.

Some parts of the DLC are undergoing harsher weather conditions than others.

For the first time in any of the releases in this DLC trilogy, you’ll get to interact (somewhat) with an important NPC. It’s not a massive amount of additional dialogue, but even this brief chat contrasts nicely with Eleum Loyce’s otherwise stark, lonely halls. A post-completion monologue fills in some lore, too.

Prior Lost Crowns releases had to rely on injecting life via some lively and capable Red Phantom invasions, which is a tradition maintained by Crown of the Ivory King. It’s been strangely enjoyable to witness the evolving abilities of NPC Red Phantoms, and one particular encounter in this release ups the ante a step further. FromSoft’s DLC team evidently has a pretty clear understanding of what Souls fans find funny, so there’s a great tongue-in-cheek quality to giving AI invasions the ability to drop a “very good!” stone right after killing the player.

There are a pleasing amount of new, regular foes to face too. More than in the prior pair of Lost Crowns releases. While some are clearly based on previous enemies (hope you have fond memories of Bonewheels,) a few have some neat quirks like backstab immunity, and others, like the towering Rampart Golems, just have well presented move-sets.

The level itself has a couple of unusual points of interaction, too. I’d never expected to be rolling a giant, deadly snowball in Dark Souls, but it was a welcome little diversion.

That sound you can hear is the Lore Alert sirens being set off.

In-keeping with Crown of the Ivory King’s structural theme of repeated exploration, both main bosses have attributes that will send you out on additional hunts before facing them. Since this is Dark Souls 2, it’s possible to kill each boss without doing this, but it’ll be significantly harder.

Exploring the extremities of Eleum Loyce is worth it for reasons beyond making your life with bosses a whole lot easier. If the last DLC was quite weapon heavy, this one is all about hats. Bell hats. Lucatiel’s hat (without mask.) A very special returning hat from the first Dark Souls. It’s like Valve was doing consultancy work on this one. Don’t worry if hats aren’t your thing, there are still unique weapons like the Bone Fist (which will, no joke, give you martial arts fighting moves.) The new enemies will provide you with more armour and weapon types too, but as in previous DLCs the drop rates are a bit on the low side.

Even after figuring out their peculiarities, the compulsory bosses in Crown of the Ivory King provide a challenge. One, because it’s a four-legged Dark Souls creature that knows you just want to hit it in the hind legs and can actually defend against that. The other, because before facing them you have to undergo a gauntlet of backstab-resistant knights. Neither are up to the extremely high quality of Fume Knight or Sir Alonne from Old Iron King, but they’re no slouches either.

This jerk can’t be backstabbed, which means I might actually have to fight fair.

I’m less keen on the (admittedly optional) grinding that arises after you defeat this DLC’s final boss. The knights in the aforementioned gauntlet will keep spawning in the area even after you defeat the boss, and sometimes drop something called Loyce Souls. To claim all of the possible items in this release, you have to grind up 50 of them. In one sense this is FromSoft encouraging co-op offers in a boss area heavily suited to it, but in another, more time-conscious, sense that is a crazy amount of souls to grind for.

Crown of the Ivory King’s optional co-op area is also proving quite divisive among players. Set amidst a blizzard, the weather conditions, lengthy distance and regularly spawning electric reindeer-pony foes mean running through this section solo to the boss is thoroughly discouraged. As a set-up, I don’t think it’s as bad as the Iron Passage from Old Iron King, but the boss pay-off is fairly weak (just a doubling up of a boss you already fought in this same DLC) and the idea behind battling through a blizzard in co-op is perhaps better than the execution.

Yep, you’ll be going over there.

Those bits though, the bits I’ve just said aren’t all that amazing, are completely skippable. The compulsory parts, like the incredible interconnected level design or the smart way you’re encouraged to revisit and re-approach areas with a fresh eye, are magnificent.

Back in July, the very first paragraph in my Sunken King review was all about how I’d been worried about this DLC set. Seeing the words ‘Season Pass’ (so often a trap for wasting money) in such close proximity to Dark Souls 2 was a bit concerning. Three months (and a bit) later, it’s gratifying to be able to recommend every single one in the trilogy, almost without reservation. They feel like the work of a team liberated from the pressure of developing a sequel to Dark Souls, and able to express a more experimental side. Crown of the Ivory King concludes the DLC series (and perhaps the title itself) with more exemplary level structure and plenty of nuanced nods to ardent players.