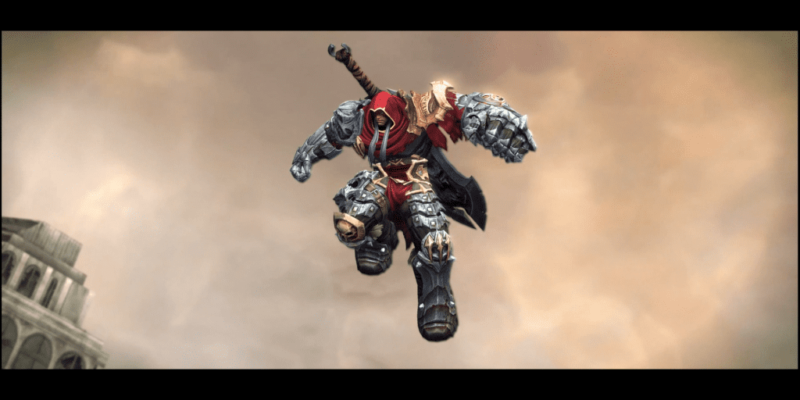 Darksiders Warmastered Edition (which the Spaced fan in me really wants to call the War Bastard Edition) is, in some ways, an unlikely renovation of the 2010 original. Not only is the original publisher (THQ) dead and bankrupt, the original developers (Vigil Games) are gone too. The Darksiders property is now owned by Nordic Games, and this particular edition was developed by Kaiko. Which explains what she was up to during all of those Deep Space Nine episodes “visiting her mother”.

Yes, I know, that character was actually called Keiko. Just let me have this one Star Trek joke, alright?

Anyway, in a gesture of goodwill towards all mortal souls, Nordic have given away the Warmastered Edition for free to existing owners of Darksiders on Steam. That was awfully reasonable of them, and if you’re one of those people you have little to lose in giving it a try for yourself. For those who didn’t own the original, though, here’s a look at what this remaster brings.

Update 2 December: A pair of patches have been released for Darksiders Warmastered Edition (see updates at foot of the article), which addressed many of the launch day issues raised in this overview. 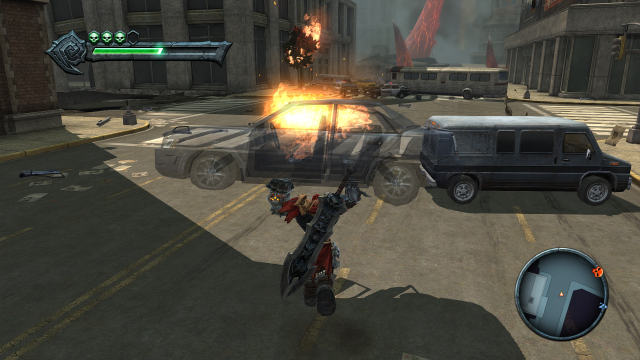 Ghost cars, for one thing.

The brief version is this: if you have an Nvidia card, the Warmastered Edition is going to run pretty fine for you. If you’ve got an AMD GPU inside that box of yours, things aren’t nearly so rosy. There are other issues with this version that are not GPU-specific, however. Before we get further into that, let’s peak at a few of the brand new options. 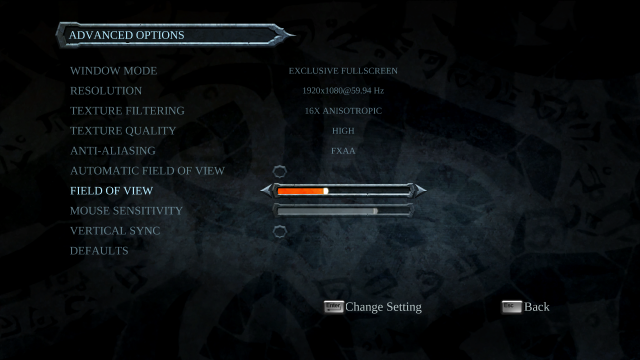 Click to make this image larger, if you need a closer look.

As it states, this is actually the ‘Advanced’ Options menu, but that’s where the bulk of the regular PC stuff is housed. In here, you can go for Windowed, Borderless Windowed or Exclusive Fullscreen modes. It’s also where you set your resolution, which can max out at 3840×2160. Whether you’re downsampling, or just have a 4K display, you’ll be sorted there.

In a splendid commitment to low-end systems, the resolution also goes down to 640×480. Just in case you want to re-live the early 1990s in PC gaming. 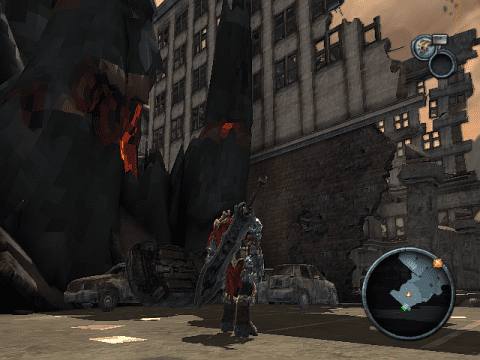 I absolutely do, and it’s beautiful.

16:9 and 16:10 aspect ratios are supported, as is 21:9 … in theory. I can’t actively test the latter since I don’t have a 21:9 display, and reports suggest it’s currently just stretching the image. A Kaiko employee is in that same thread saying it’s being looked into, so that may well get a fix.

Texture Quality offers Very Low, Low, Normal, High, and Very High. While the Anti-Aliasing options extend to Off, FXAA, and the incredibly taxing FSAA. Texture Filtering offers the usual increments up to 16X.

Beneath that, there’s an FOV slider. It’s sadly bereft of any numerical values, but at least it’s there. Here’s what Darksiders Warmastered Edition looks like at the max FOV. 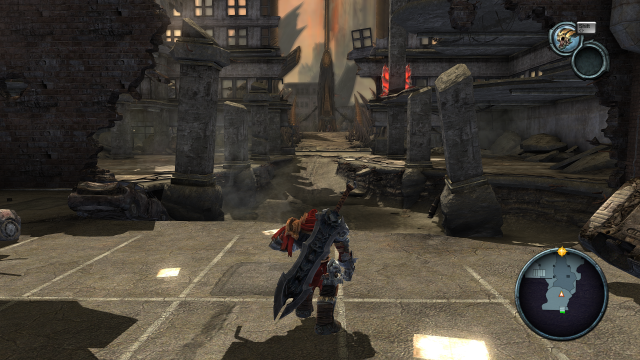 And here it is with the FOV slider at minimum after a full restart of the game.

That’s …  oh, that’s exactly the same. I tried several times, but I couldn’t actually get the FOV slider to do anything. That, too, is confirmed as something the developers are looking to fix in future.

Mouse Sensitivity and V-Sync pretty much speak for themselves. I’m unsure if the mouse is reading absolutely raw input when in-game, but after fiddling with the sensitivity setting a little the camera motions at least felt smooth (when the frame-rate held, anyway). 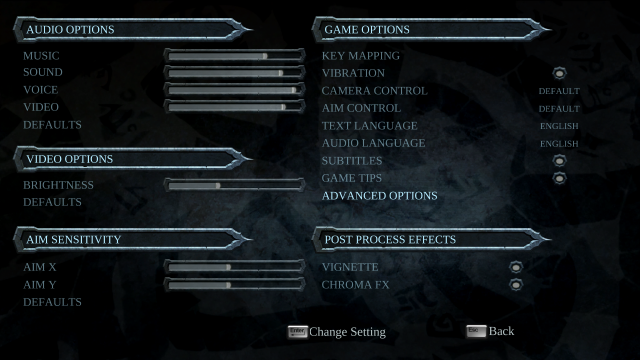 Again, click for a larger version if you want to look closer.

The more generalised options menu includes a few audio sliders, brightness, separate aim sensitivity sliders, ways to reverse the x/y axis on camera and aiming, and the gateway into key mapping (which we’ll get to shortly).

A couple of Post-Process Effects live on this menu too. Vignetting refers to the darkening of the corners of the screen in order to draw focus to the center, while Chroma FX does … something else. I’m afraid I have no idea what. Makes metallic things look shinier, maybe?

As noted, you can get into key mapping here, which is a reasonable springboard to start talking about the Keyboard and Mouse controls in Darksiders Warmastered Edition. 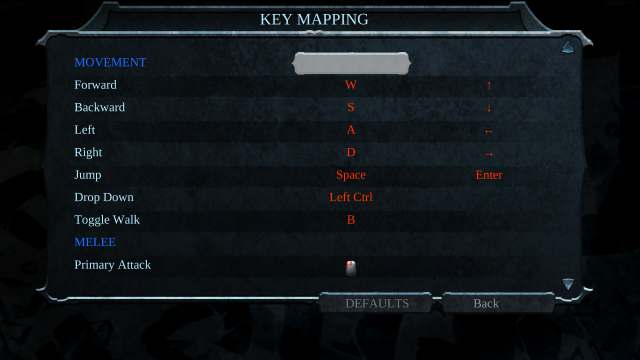 There’s something very old school and ‘no frills’ about the typeface used on this menu.

Overall, they’re pretty reasonable. The couple of hours I’ve put into the game have all been on keys and mouse. As mentioned, the mouse control over the camera seems suitably smooth, and there are obvious benefits to aiming. If the default keys aren’t to your liking, you can remap them to some extent.

For some reason the default ` key for summoning Mark Hamill’s cheeky-chappy Watcher didn’t actually work in-game, so I had to change it to something else. I wasn’t able to reassign ` to anything else, and other punctuation-type keys (I tried ‘ and ; for example) didn’t seem to want to work as input options either. No sure why that would be the case, but it does slightly limit your choices.

The method for selecting and using abilities isn’t great by default on keyboard either. To activate one of your four assigned powers in combat, you have to hold capslock and then press 1-4. That’s not exactly straightforward in the middle of a fight, and remapping doesn’t really help here because no matter what you’re going to have to hold down and press an additional key (while simultaneously maneuvering War around). 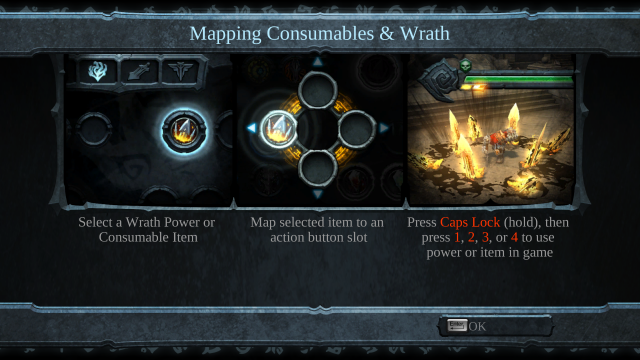 There’s got to be a better way.

However, that’s my only major gripe, and other aspects (like the mouse pointer functioning in inventory menus and the like) are decent. It’s not possible to switch between mouse/keys and gamepad on the fly; that requires the game to be restarted. Whatever you press ‘Start’ with on the opening menu will be your main control input for that session, and the button inputs will show up accordingly (at least they did for my Xbox 360 pad).

The heart of Darksiders is still here, ie: whacking demons with a big sword.

Warmastered Edition is double the download size of the original (20GB rather than 10), due, presumably, to the inclusion of higher quality textures. The cut-scenes appear to be rendered at their original rates, and have black bars framing them.

Unfortunately, there’s also a substantial audio problem with the cut-scenes, resulting in all sound besides voices being almost entirely silent. The audio appears fine when actually in-game, and moving the ‘Video’ audio slider around doesn’t fix this, so that’s another thing to add to Kaiko’s list of things to solve in an upcoming patch.

Their main concern, though, should be performance on AMD GPUs. As you may already have heard, the frame-rate drops on AMD hardware are a little ridiculous right now. I was running Darksiders Warmastered Edition on an i5-6600 / 16GB RAM / 4GB 380X /Windows 10 machine, and frequently had the frame-rate plummeting into the 30s from the upper 90s. It seemed to occur during combat for the most part, and while ‘unplayable’ gets thrown around far too often by PC players, it certainly wasn’t pleasant.

There’s a lengthy Steam thread about the issue, featuring all manner of AMD GPU models experiencing varying degrees of woe. In contrast, if you have an Nvidia card, it seems like you should be perfectly fine. Even people with 950s have chimed in to say it’ll hold 60fps at 1080p. At present the game has an FPS cap of 100, but it sounds like that’ll actually be removed in due course. 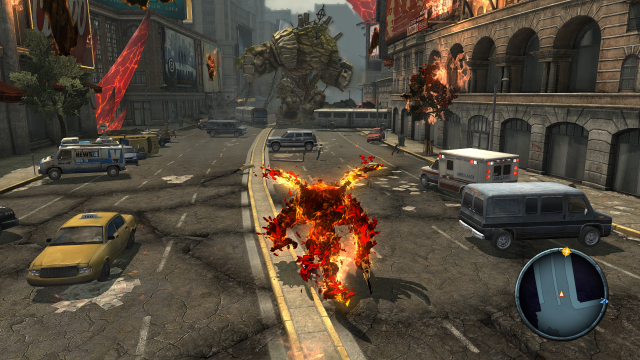 You’ll know the AMD performance is fixed when this opening section runs above 20fps.

Basically, Kaiko still have a bit of work to do on this one. AMD users should absolutely hold off until a fix comes through for those GPUs. As for everybody else, your response to this version will likely depend upon the impact the various other problems may have on your particular set-up. 21:9 support isn’t really there yet, the FOV slider doesn’t work, and cut-scene audio seems to be broken (though I don’t know if that’s universal). The FPS cap might bother you if you’re planning to play at 144hz, too.

That all seems very mend-able, so the longer term prospects for this release aren’t too bleak. Giving it to existing owners of Darksiders for free was a terrific move, the mouse/keyboard controls perform pretty well, and there are a fairly respectable range of resolution and graphics options for an updated remaster (albeit some of them, like the FOV slider, don’t work). But at the time of writing Darksiders Warmastered Edition does still have those lingering issues outlined above, and it’s a dodgy proposition for AMD users.

Update 1 December: A hotfix is out, addressing FOV settings and lifting the frame-rate cap to 330. Active investigations are ongoing regarding AMD performance. Positive signs that the issues are being taken seriously.

Update 2 December: A further patch has been released, resolving (at least for me – and others are reporting positive results too) the AMD GPU issues. 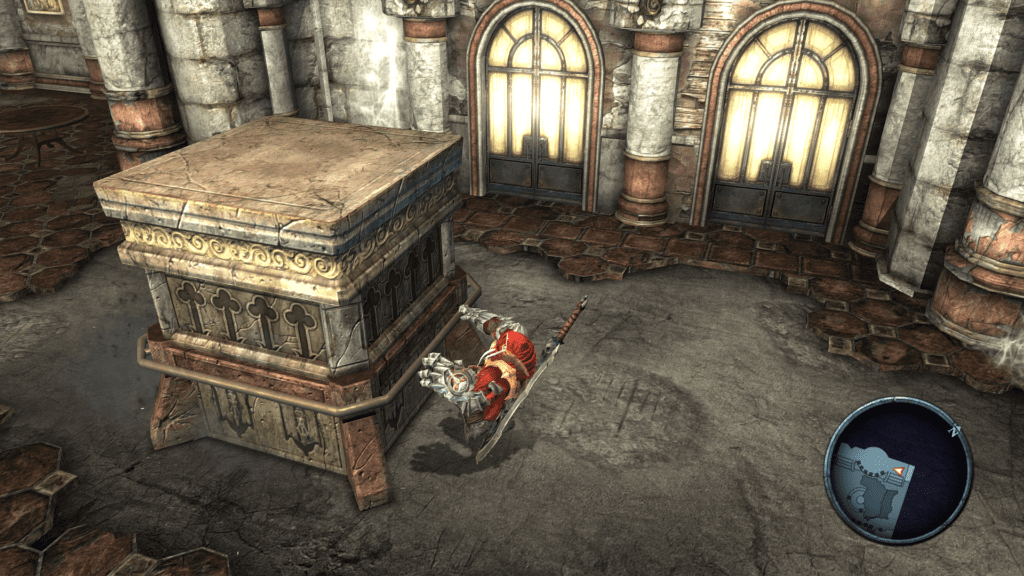 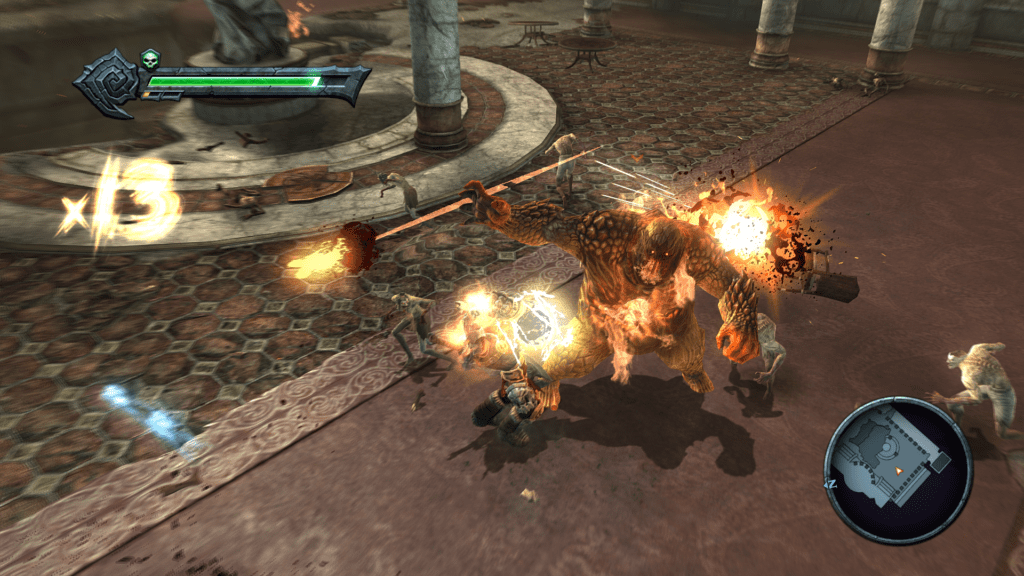 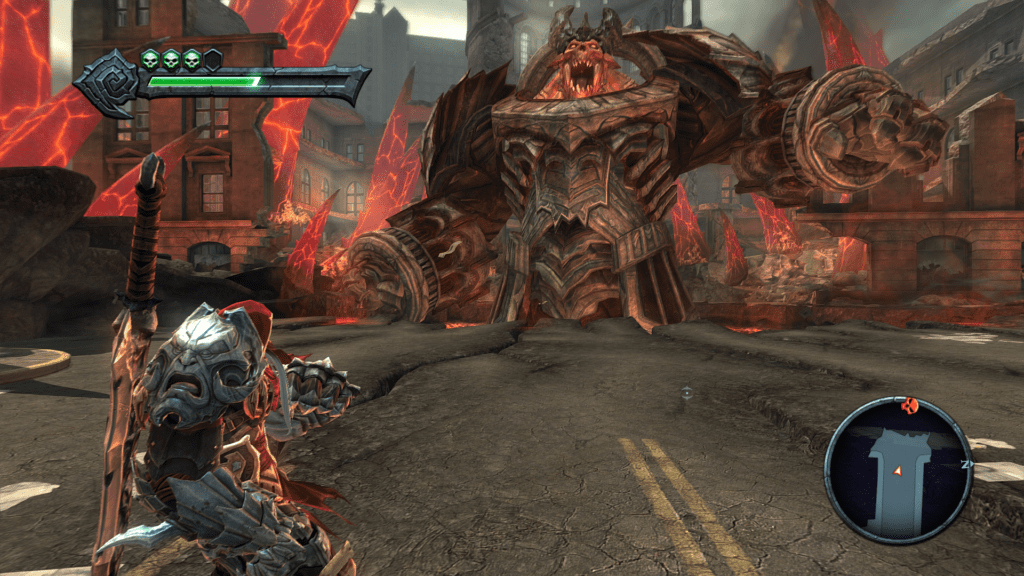