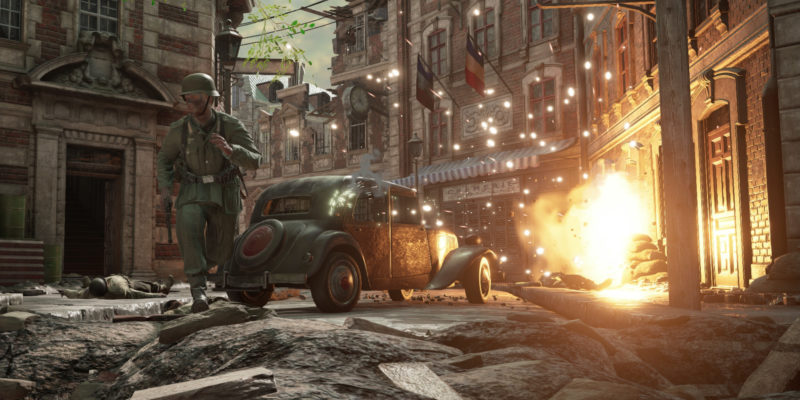 When I was offered to review Days of War as it’s leaving Early Access, I thought “didn’t I just do that already?” Nope, that was Battalion 1944. I had played Days of War before, back when it was in EA and rubbing elbows with Day of Infamy. It wasn’t an impressive game back then, and it hasn’t improved much since.

If you haven’t gathered yet from the context, Days of War is a multiplayer shooter set in World War II. No effort was wasted on trying to be original: You’ll be re-fighting the war on the same locations that you already saw in Call of Duty 2. That game came out basically in the antediluvian times, but its multiplayer casts a mighty shadow, one that many shooters don’t even try to escape. 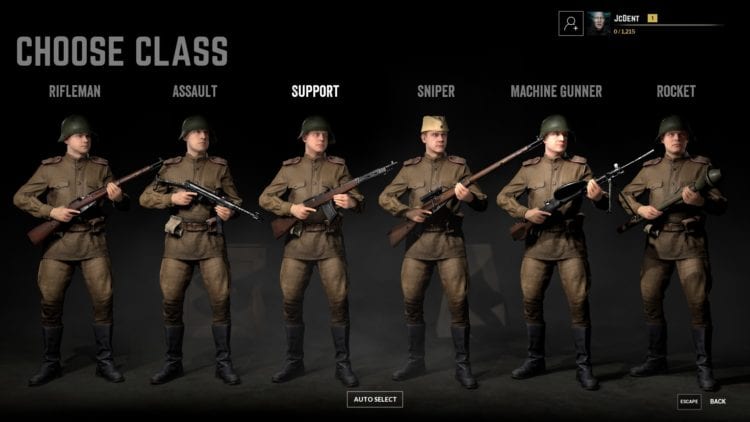 Roughly speaking, Days of War is a class-based FPS. Those classes differ in loadouts and possibly their stamina bars, and nothing else. Four WWII armies are present — the US, the UK, the USSR, and Nazi Germany. Their historic armaments are made to conform to the class requirements with the finesse of someone using a sledgehammer to make that square peg fit into a round hole.

Take the Rifleman class. Three of the factions start out with bolt-action rifles, which are basically one-hit-kill weapons. But since the US had the semi-auto Garand in the war, its firepower is nerfed; you need two hits to do anything. Also, you can’t reload it mid-clip — gotta wait for that ping, just like in Call of Duty 2! Incidentally, since bots love switching to pistols, being shot at from a Garand and a pistol is basically indistinguishable from the practical side (or the audio). 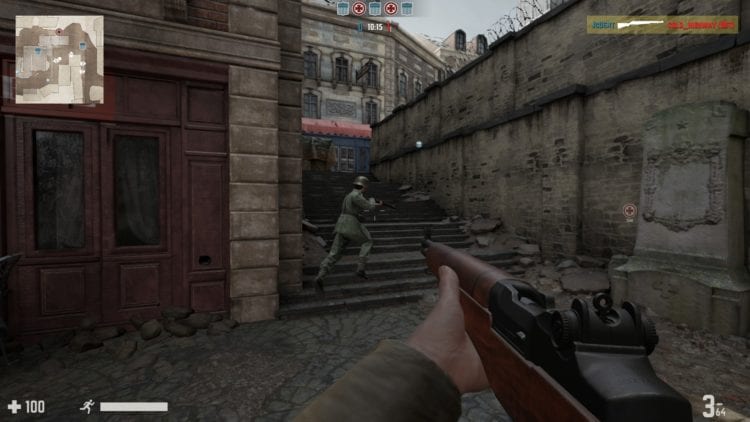 Not content with just repeating Call of Duty 2, Days of War goes a step further. The Support class is your auto rifle class (as opposed to Assault, which is the “recoiless SMG” class), so the Germans get MP 44 (you know, the Nazi-fanboy favorite StG), the Americans bring in the BAR, and the Brits get the Bren (an LMG). The game gets creative with the Soviets and gives them Fedorov Avtomat. Only 3,200 ever made, all of them expended during the Winter War. Well, none of that really matters, as all of these “support” weapons feature recoil second only to firing machine guns (there’s a class for that) unbraced.

About the only praiseworthy choice the Days of War developer made was with the rocket launcher class. With Soviets lacking their own AT launcher, (Vehicles don’t exist in the game, so it’s a high-risk, possibly-high-reward AoE weapon.) they get to run around with looted Panzerfausts. 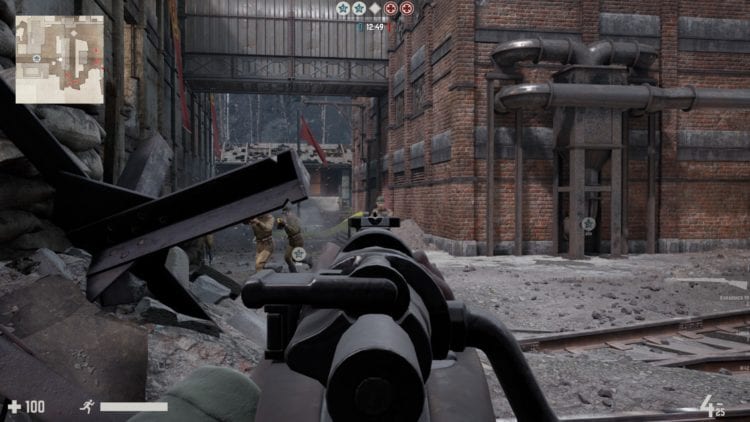 I’m about to make a bolt statement.

But let’s talk about the gameplay in Days of War. The main mode of the game is running around in 16-player maps and capturing objective points. No tickets, and if you get shot, you come back in via a timed reinforcement wave. Most maps feature four points that can be captured nearly instantly if no enemy is contesting it. The fifth point requires a teammate and features a lengthy timer. In bot matches — and I’ve only managed to play one match that had at least four human players — this means that you can just zip around and win the round basically in under a minute. Other modes exist, but with nonexistent custom server population, AI practice matches running solely on checkpoint capture, and the only official server only doing checkpoint, they might as well not even exist.

Oh, and once you win the round, you have several seconds to freely gun down the losing team as they can’t shoot back. Days of War tastefully integrates shooting PoWs into a multiplayer shooter. Vae victis indeed. 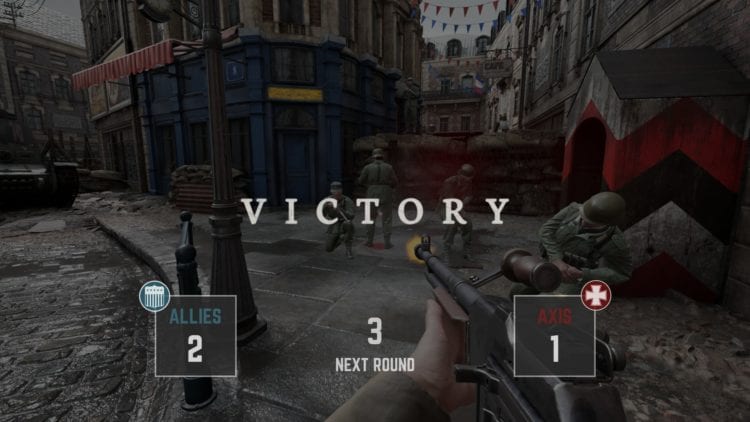 Avenge the Malmedy massacre with your own digital war crimes!

You do all this fun stuff on a variety of maps that remind you of the locations in the Call of Duty 2 campaign. There are farms in the French countryside, ruined French cities, idyllic German towns, African urban landscapes, Leningrad (ft. a misplaced Barmaley Fountain), and a nameless railway depo. It’s a real who’s who of tired WWII shooter motifs. At least we’re not storming the beaches in Normandy again! The maps are detailed enough, provide a variety of routes for outflanking camping snipers, and are fittingly small for a twitch shooter.

Earning medals and other fun stuff

As you accrue kills and experience, you’ll unlock new gear, weapon skins, and new weaponry. That last one is the biggest offender, as it’s invariably unlocking older WWII tech than the one you start with. US Riflemen can finally enjoy having bolt-action rifles in the shape of Springfield. German Assault troops get their mitts on every ancient SMG design that preceded MP40. UK Machinegunners can replace their Lewis MGs with Bren LMG, which is supposed to be somehow different from Support class’s Bren. A fun quirk that hides here is that you unlock PPSh-41 with the drum mag… that only holds 35 rounds. Oh, and it features Support class-level recoil. 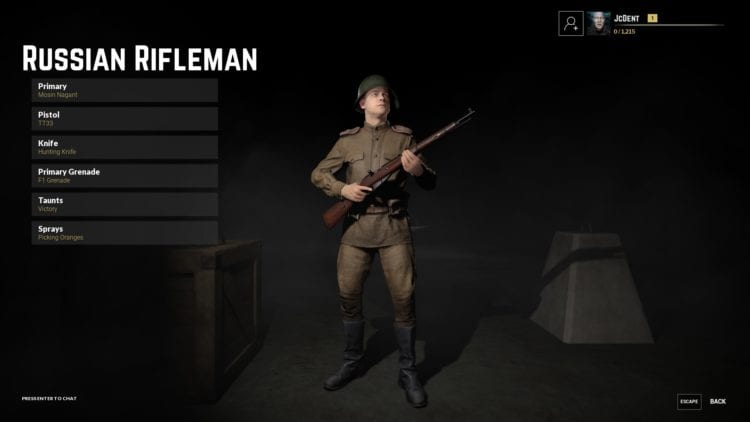 The sprays are all pin-ups while the taunt can be played to impress non-executed PoWs.

This isn’t the only curious decision when it comes to visuals vs. historicity. While Days of War doesn’t feature the ridiculous flag armbands like Battalion 1944, the Soviets are all bedecked in the rare SSh-36 helmet (imagine Darth Vader sans face plate). The American troopers are all Rangers (like in CoD2 single player campaign) while the Brits are Paras. Overall, the game doesn’t look too bad while you’re moving around the maps, but the character models need some work. They don’t look good even in the arsenal window on the highest graphic settings.

The weapons are where Days of War‘s worlds of bad audio and bad visual designs collide. None of them sound well or come off as powerful. I already mentioned how disappointing the Garand sounds; on the other side of the spectrum is the trusty Mosin-Nagant, which leans into the carbine aspect so hard it might as well be an Obrez (a cut-down). The pistol models are universally ugly and sound basically the same. There was also the weird choice to have grenades leave a smoke trail when they’re thrown.

Days of War doesn’t bring anything special to the genre of WWII twitch shooters. This is a mortal sin, as this is a ground so well trod at this point, it rates for B-17 landings. And the abysmal player count shows this. Sure, Battalion 1944 had a huge upswing in players when it finally launched for real, but it tanked just as fast. Seeing how that game is both twitchier and shootier than Days of War, it does not bode well.

Days of War tries to be Day of Defeat or Call of Duty 2. It falls short of both, hobbled as it is by a myriad of tiny issues that combine into a lackluster whole.

Nom Nom Apocalypse is a Gungeon-esque shooter coming in February

How to make money in Temtem – a guide to Pansun farming