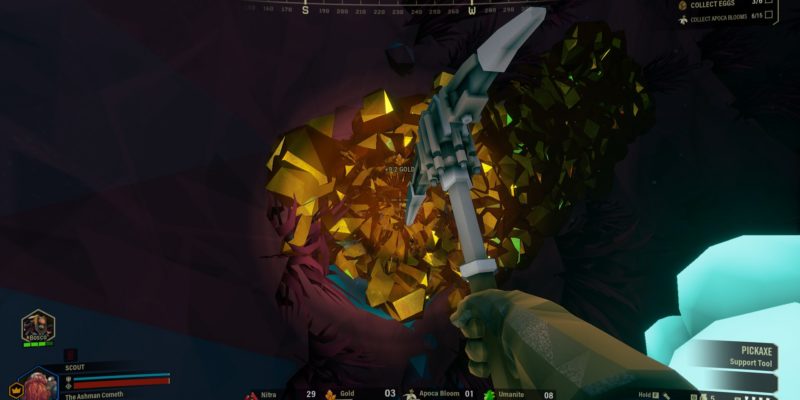 Deep Rock Galactic is finally out after many months in early access. Making four-player co-op satisfying when the core gameplay isn’t built around pure carnage took some ingenuity, but it paid off. Helping friends mine while making sure the coast is clear makes for consistently enjoyable gameplay, even if a dearth of objective types threatens to make things grow stale for some.

The setup for Deep Rock Galactic is simple. You play as a highly-customizable dwarf that works for the titular mining company. There are four classes to choose from and you’ll be taking them into different biomes to accomplish one of several objectives. These can either be completed solo or with the help of a drone. Or, better yet, team up with three other players. Your goal is to keep leveling up, raking in money, and improving your characters.

Starting the game drops you in a lobby with rooms for each of the four team members, along with several consoles that are used for various things. You can check the assignment board to undertake quests that unlock features and your three weekly assignments, change your character’s appearance, select their loadouts, and upgrade their weapons. 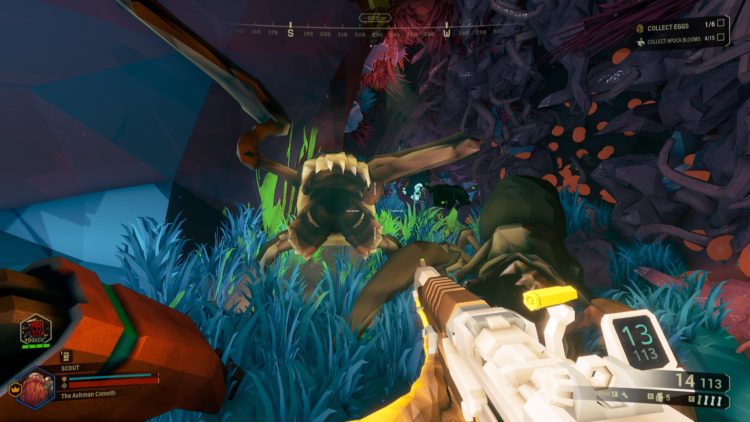 Additionally, the lobby contains a few other silly amenities, such as a bar that has drinks (a few of which even add little stat boosts), a barrel-kicking game, and a jukebox that makes your character start dancing once you get close to it. It’s rather charming to play the game with friends and share a virtual drink with them, only to throw the empty mug on the floor while the dwarves party. Deep Rock Galactic simply has a lot of personality and charm.

There are four classes in Deep Rock Galactic, and they all have their specific roles to play and unique pieces of equipment. There’s the scout, who can light the area up or use a hook gun to easily reach areas the others cannot. The engineer focuses on setting up defensive turrets and building platforms that let them and their teammates get around more easily. The driller has giant drills on his arms and can quite literally create his own pathways. Then there’s the gunner, the combat-focused class for people who just want to blast enemies to pieces.

The four classes play well together, and good teamwork is imperative for tougher missions. There are five difficulties to choose from in Deep Rock Galactic, with each offering higher rewards if you can complete them. Any time a dwarf is incapacitated during play, one of his teammates can revive them in a jiffy as well. Solo players can also be revived by their drones, but only four times. Naturally, if all dwarves are taken out, the mission is failed. 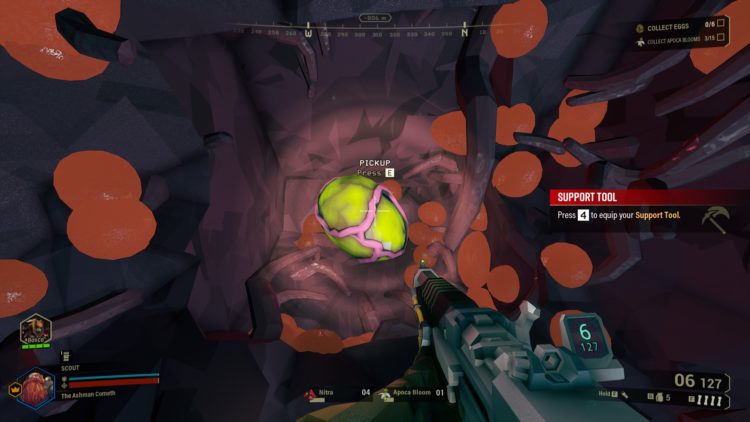 As you play, you’ll hit milestones that unlock perk points. These points can be used to purchase equippable perks that have a variety of effects. Said effects can include lowering revival time or speeding up the depositing of acquired items and minerals. A character can be leveled up 25 times. After that, they can then be promoted, which resets their level, unlocks the ability to further modify your weapons. The upgrade also adds an additional perk slot.

Go here, mine this

While Deep Rock Galactic is undoubtedly an enjoyable game, there are only a handful of different mission types. Almost all of them revolve around going and finding a certain amount of an item, such as mining a material known as morkite, or digging strange eggs out of odd, fleshy nests. Any items you mine or pick up are then stored in your MULE, a storage robot that follows you around. The non-collection mission types revolve around fixing up broken MULEs and repairing some other equipment, or hunting down powerful boss monsters.

All of the mission types are generally satisfying to boot. The areas you explore are all procedurally-generated and require thorough exploration to accomplish the main objective. As well as the minor one, which always centers around finding a certain amount of a secondary item, such as flowers or fossils. The lack of variety does take its toll, though. If you’ve played the game for a few hours, you’re going to have seen all of the mission types that the game has. There is more to them, though, as later missions have larger, more complex areas to navigate. 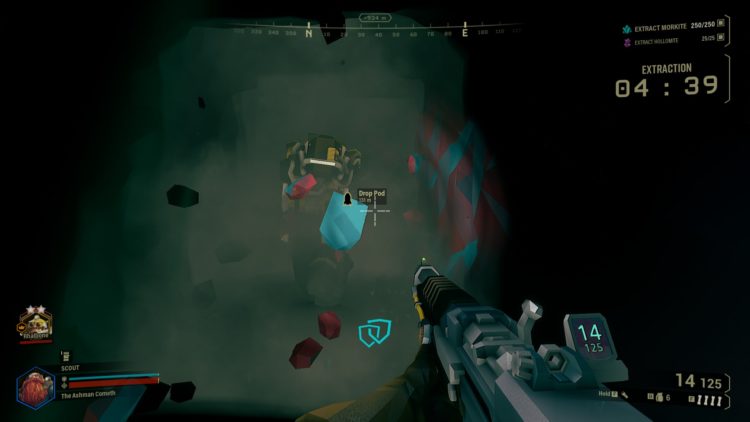 Deep Rock Galactic‘s endgame is centered around the toughest of these, called deep dives. These come in two varieties:  regular and elite. These are made up of three missions each, so they can take a while. The missions are connected, so the amount of health and ammo you have stays constant — although you can still call down supply drops by spending the red mineral called Nitra to refill both. Pulling these off regularly can take a lot of communication and even more patience, so they’re really where the game shines. They take a long while to unlock, though, as you won’t be able to promote one of your classes without putting in a couple of dozen hours of playtime or so.

Deep Rock Galactic isn’t a very technically-demanding game. It’s simple, but has a rather striking aesthetic. The different biomes all look suitably diverse, as do the unique pieces of destructible geometry they’re made up of. I love seeing the dark caves lit up by huge crystals in some of the areas. Many of them have their own hazards too, such as the requisite magma-centered biome where you really need to watch your step. Smashing into the environment with your pickaxe also looks really neat too, as I never got bored of seeing the way the land around me broke apart.

After a while, though, I did get somewhat bored of the game’s objectives. I was hoping more types would be added as the game went through development, but that sadly never happened. That being said, I never stopped enjoying the game, as the gameplay itself is notably strong, and playing with others can keep it fresh. The different weapons are also a blast to use and modding them and trying out their different variations while splattering bug guts all over is always satisfying. 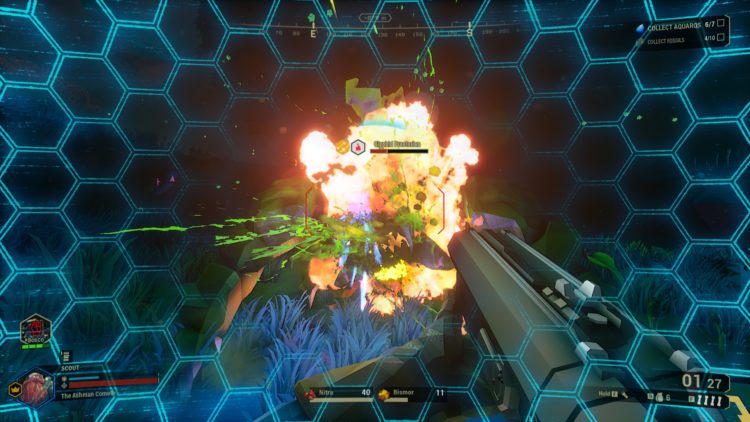 Deep Rock Galactic is a great way to spend time with friends and has a lot of content depending on how much you mind doing the same things over and over again. Anyone who strongly dislikes repetition will probably get sick of it after a while, though.

Anyone fond of multi-player centric games that require teamwork and likes to fill a specific role will almost certainly find something to enjoy in Deep Rock Galactic. It's a great way to spend time with friends and has a lot of content depending on how much you mind doing the same things over and over again. Anyone who strongly dislikes repetition will probably get sick of it after a while, though.

Volibear rework breakdown: Everything you need to know