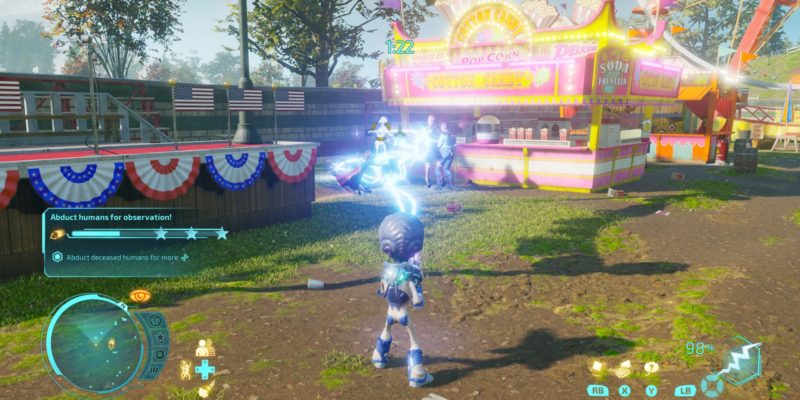 Some games are truly worthy of faithful remakes. Taking a classic and updating the visuals doesn’t just breathe new life into a title, but introduces it to a whole new generation of people. Destroy All Humans! isn’t a classic, however. This remake may be gorgeous and was put together with care, but that doesn’t mean much when the gameplay and design are still as poor as they were more than a decade ago.

Tales from the Crypto

Destroy All Humans! is still about the leader of the Furon Empire sending Cryptosporidium-136, a clone of a clone, to the Earth to find fragments of lost Furon DNA. Clone 136 gets captured, however, so 137 is sent to find out what happened to him and launch an invasion, single-handedly. Although the graphics are all-new, the voice acting and dialogue are ripped straight from the 2005 release. And while the voice acting is good, the game isn’t as funny as it thinks it is. It’s very try-hard much of the time.

It also doesn’t help that the game’s narrative is dull and that the missions you undertake to progress it don’t hold any weight or real forward momentum. While Destroy All Humans! is likeably goofy at first, it becomes stagnant and rather annoying as it goes on. The satirical, broad focus on 1950s America feels quaint now. And it doesn’t help that certain things in this game make it stick out rather badly in regards to current events. If I typed up a description of the last four missions, I’m almost sure it’d land me on a watch list. 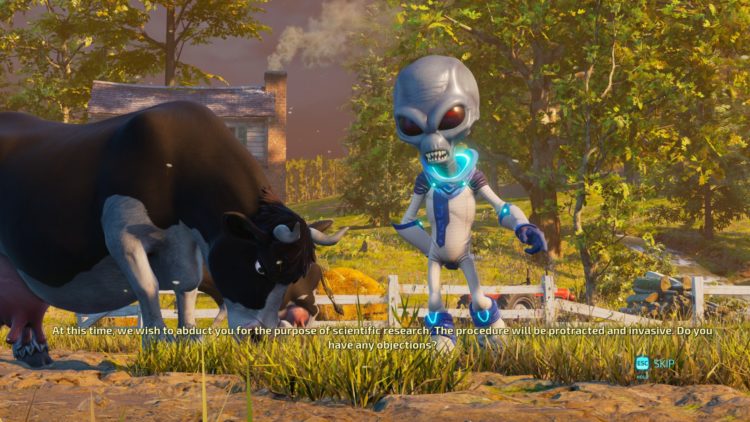 It lives up to its name, at least

Just like the story trappings, the gameplay in Destroy All Humans! is entertaining at first. But after a few hours, it becomes extremely redundant. Crypto gets a few new weapons as things progress, but half of them simply aren’t all that useful. Matters are made worse by the tiny amount of variety on offer in the game’s missions. The game is made up of several sandbox maps and missions task you with completing objectives in them.

The objectives are either very few or practically interchangeable. You’ll be told to go and kill or blow up X amount of Y much of the time. You’ll also disguise Crytpo as a human and trot him around in restricted areas while he slowly scans human minds. So much of the game is made up of these two objectives. There’s a certain amount of fun to be had with them, as the mechanics are rather clever, but they’re never expanded on in meaningful ways.

The forced sections where you’re meant to walk around while disguised, in particular, wear out their welcome very quickly. It doesn’t help that many of these are poorly designed. Destroy All Humans! uses the same restricted area logic as old Assassin’s Creed games. These areas are gated off by distinct red zones on your minimap. If you’re seen without the proper disguise while in one of these zones, the game will force you to restart from a checkpoint. 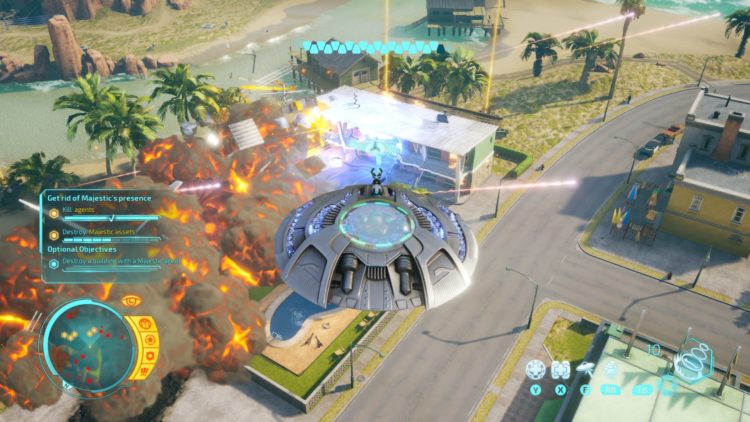 But sometimes you can’t really get into these zones while disguised, as Crypto can’t jump high enough in human form. So you’ll have to awkwardly jetpack onto a building without being seen and then hope you can disguise yourself from the roof. And even though the game is quick to stress that you need to remain undetected, these sections often end with mandatory combat encounters where you get discovered anyway. It all feels haphazard. It’s like the missions are just the sandboxes with generic markers strewn about. You can also explore the maps outside of missions and take on four repeated challenges — races, rampages, abductions, and Armageddon. But these are just as repetitive and tedious as the mission objectives.

If I had to describe how Destroy All Humans! plays, it’d be as a combination of Grand Theft Auto and Ratchet and Clank. The movement and shooting are similar to the latter, while the way you fight hordes of enemies endlessly feels like the PlayStation’s GTA trilogy when cops are swarming you. Crypto has four weapons, plus a jetpack, and the ability to dash. The best part of the game is how mobile he is, as effortlessly gliding around the sandboxes feels good.

But the combat is fairly poor. You’ll often be using Crypto’s electric gun, as it’s the only one that you don’t need to stop and get more ammo after using. But it isn’t fun to use. It takes too long to dispatch enemies and runs out of juice too fast, which often leads to attempting to kill foes, only to have to stop, wait a few seconds for it to recharge, and then you can finish killing them. The best gun is the disintegrator ray, which makes short work of nearly everything. But even then it feels mindless and dull at best. 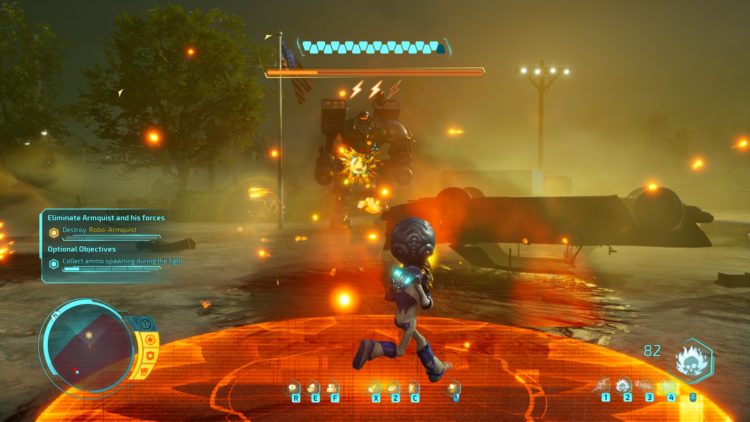 So much of the game sees you blasting throngs of helpless people, like a GTA rampage. If that’s something you enjoy, you’ll get more mileage out of Destroy All Humans!  than many. Crypto can also take off in his flying saucer and fight that way, but I found the saucer to be particularly awful. It’s a sitting duck and, every single time you get in it, you’re just told to destroy a handful of targets while dealing with enemy fire. The remake adds the ability to alter how high the saucer is flying but this makes practically no tangible difference.

Destroy All Humans! adds a single mission to the original. It was in the game’s code and had been mostly programmed, but didn’t make it in. However, it was finished up and re-inserted. It’s pretty much exactly like every other mission in the game due to it being short and dull and feeling like filler. Still, I can’t deny how good the game looks. It’s not insanely demanding and it’s pretty easy to hit 90 FPS at 1440p without a powerhouse GPU. The textures look great, the lighting is excellent, and the sandboxes are varied and colorful.

When it came to giving Destroy All Humans! a fresh look, the devs clearly went the extra mile. But the game needed a lot more than improved graphics. The gameplay is tedious, dated, and boring. I wish the devs had been given more leeway to alter things instead of having to stick so closely to the original because that game simply isn’t worth playing today. Similarly, neither is the remake. If you have a ton of nostalgia for the original, you’ll likely enjoy seeing it recreated with excellent graphics. Everyone else will probably walk away underwhelmed. 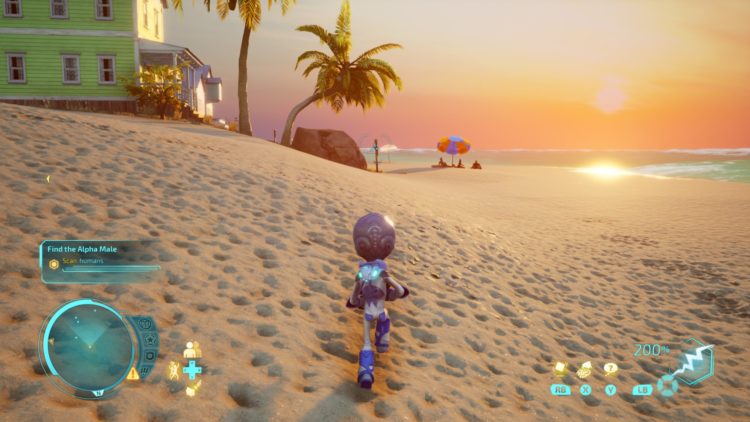 Destroy All Humans! has excellent visuals and is fun for a couple of hours. But it's so redundant, uninspired, and devoid of any real energy that I can't recommend it to anyone that doesn't already love the original.

By Michael Feghali5 days ago
News