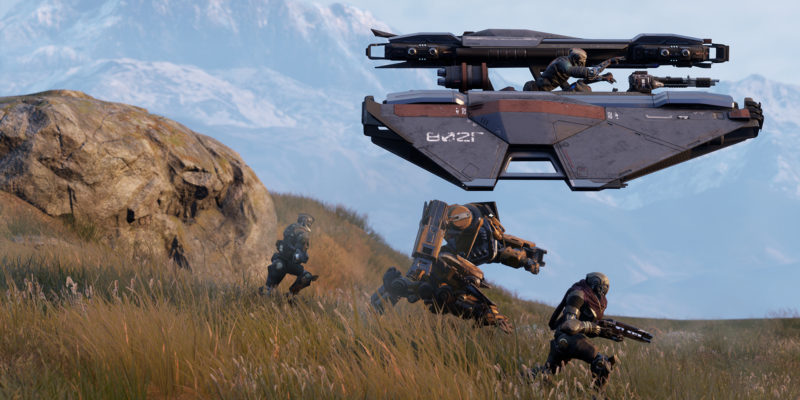 Disintegration‘s closed beta has been kicking up a firestorm this past couple of days and we were able to obtain early access. Developer V1 Interactive and publisher Private Division are set to bring you team-based FPS goodness coupled with tactical gameplay due to the various Gravcycles and crews that you can command. This overview gives you an idea of their skills, stats, and general usage in Disintegration matches.

Disintegration closed beta overview: The best Crew and Gravcycle for you

There’s a good reason why this information will be important if you’re partaking in Disintegration‘s beta. That’s because the only time you’ll ever get to check stats and skills is when you’re picking a character prior to a match or when you need to respawn. The tutorial only lets you play as a specific character, and there are no detailed entries in the main menu or even a practice mode versus bots. 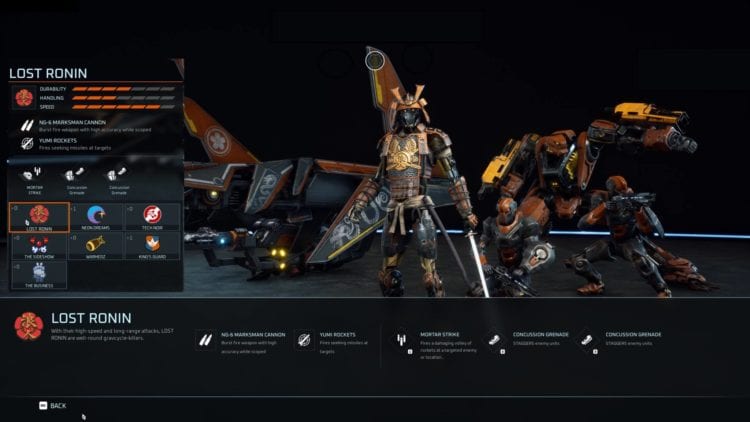 Lost Ronin is a safe bet as a middle ground option in Disintegration that you can definitely master. Lost Ronin is also Cam’s personal pick, and with good reason.

Your Gravcycle’s main gun fires in three-shot bursts that quickly deplete enemy health. The Yumi Rocket special also homes in on targets taking away at least a third of their health bar. The Lost Ronin vehicle’s stats are also fairly decent across the board. 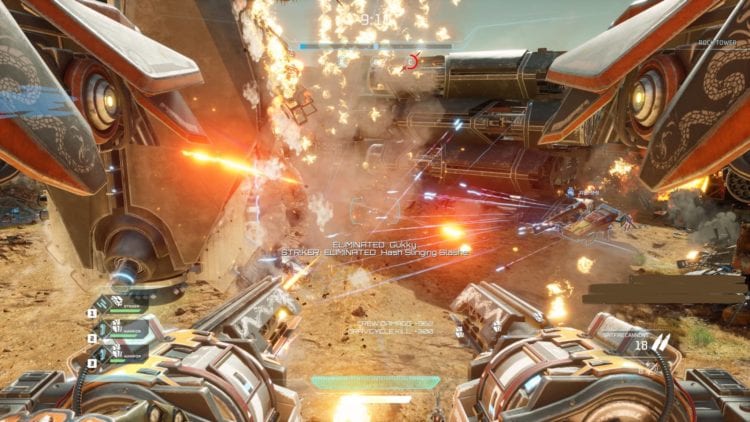 You’ve got three NPC crew members, two of whom can use Concussion Grenades with a wide AoE radius. The Mortar Strike ability is also very useful when enemy troops are clustered together.

Below, you’ll see what it feels like to be on the receiving end of a Concussion Grenade’s blast. Yeah, that’s gonna hurt your eyes and brain. The psychological effect can give you a tactical advantage in dogfights. 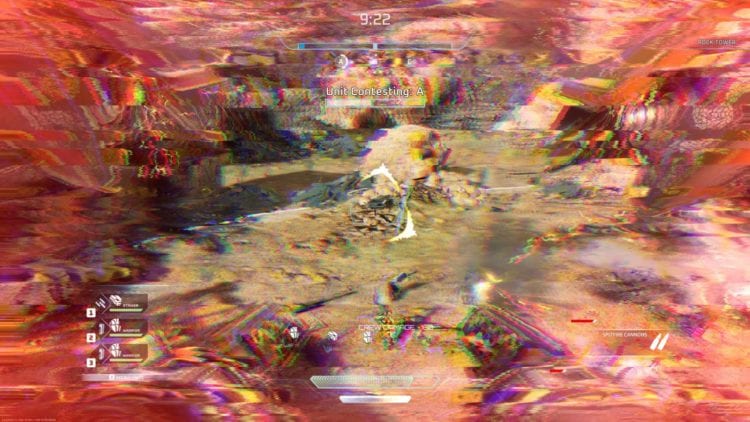 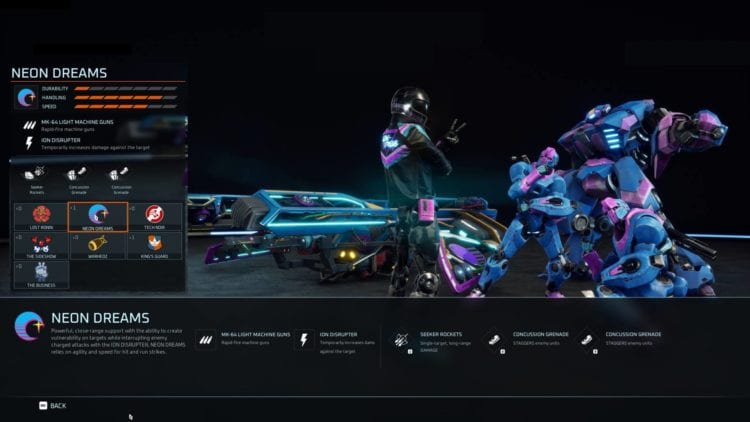 I’d consider Neon Dreams to be quite beginner-friendly, but also tough to master. As you can see from the stats, your Gravcycle is one of the least durable around. But, the additional mobility does help you zip and zoom around, weaving between enemies and striking when they least expect it.

Think of this Gravcycle as something akin to Tracer from Overwatch. The machine gun (with an 80-ammo mag) chips away at an opponent’s health while the Ion Disrupter debuffs them.

Two of your NPC troopers have Concussion Grenades, perfect for hit-and-run tactics and just being a major annoyance, whereas the Seeker Rocket helps provide that additional “oomph.” The main downside is that your troopers tend to follow you around (unless they’re specifically repositioned). As such, all your bobbing and weaving can lead to them being trapped and surrounded by enemies. 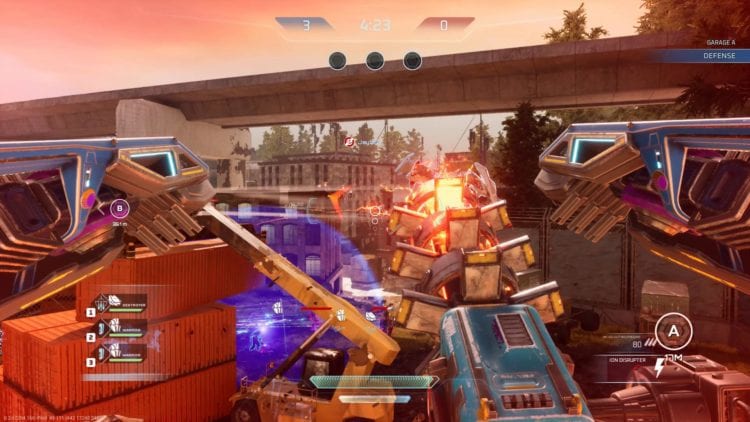 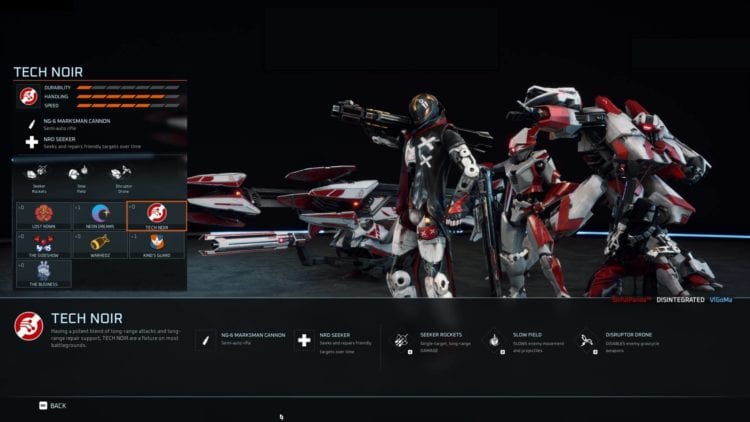 Tech Noir is another beginner-friendly choice in Disintegration, albeit with some caveats. First, the marksman cannon does good damage against targets. Sadly, it’s also a very slow-firing weapon.

Idle targets trying to take potshots will be sitting ducks. Against highly-mobile players, though, you probably won’t land hits unless you’re leading the target or anticipating where they’d go. 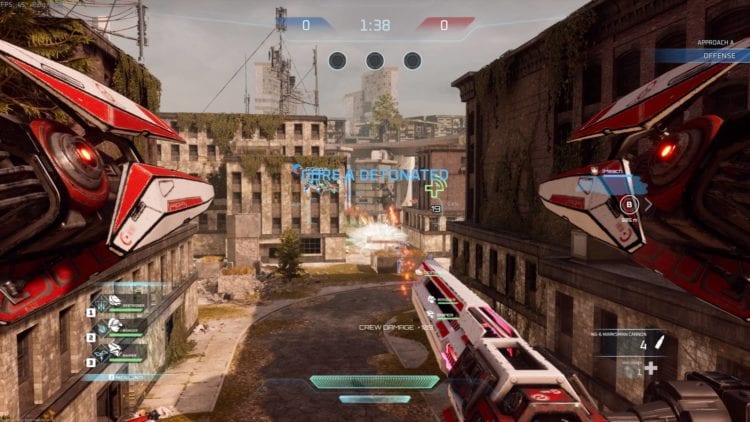 The Tech Noir’s NRD Seeker special is also very handy since it spawns a drone that heals friendlies over time. You’ll likely play more defensively and from long-range due to your Gravcycle’s low durability.

You’ve got two crew members: one can cast a dome that slows down enemies in a wide area, and the other has a Disruptor Drone that causes quite a hindrance by disabling enemy Gravcycle weapons. As usual, Seeker Rockets also add that additional firepower when needed. 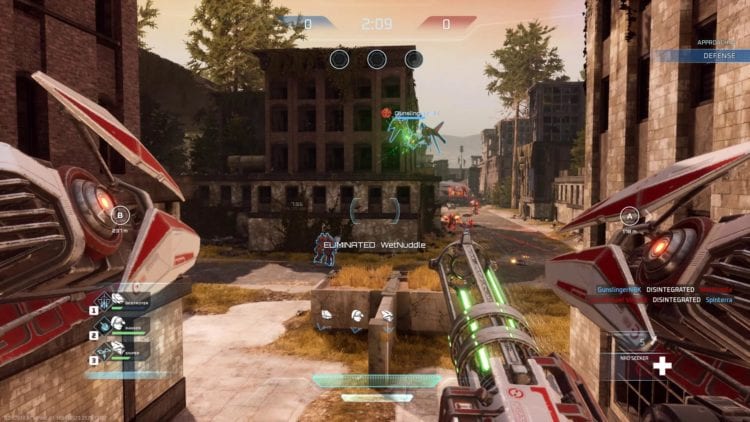 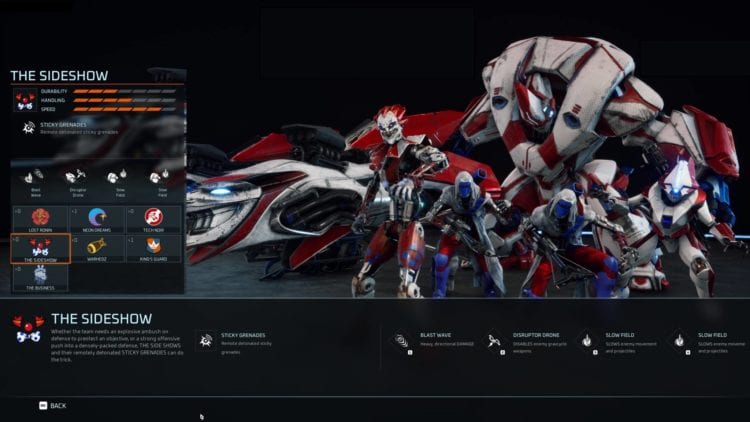 This is one of the more advanced Disintegration picks, in my opinion. The Sideshow’s Gravcycle has only one attack: Sticky Grenades. You can fire up to six of these in various spots and, once you press “Q,” they’ll all explode. This is perfect for area denial and defense. Offensively, however, the attack can take a while to get used to.

While you only have one attack (which has to be timed correctly), you also have four crew members, the most of any character in Disintegration. Two of them can cast a slowing field which is great for timed explosions for your Sticky Grenade clusters. The Disruptor Drone, as mentioned, disables enemy weapons which is helpful for 1v1 situations. And, lastly, Blast Wave does decent damage in a small area. The Blast Wave unit (a bulky mech) can also soak a lot of damage.

You’ll have to do a bit of micromanagement to find success. Unlike The Sideshow characters’ aesthetics, you won’t be clowning around. 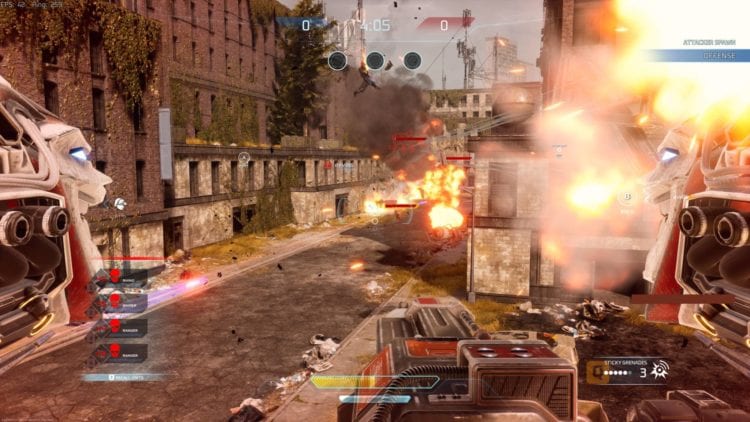 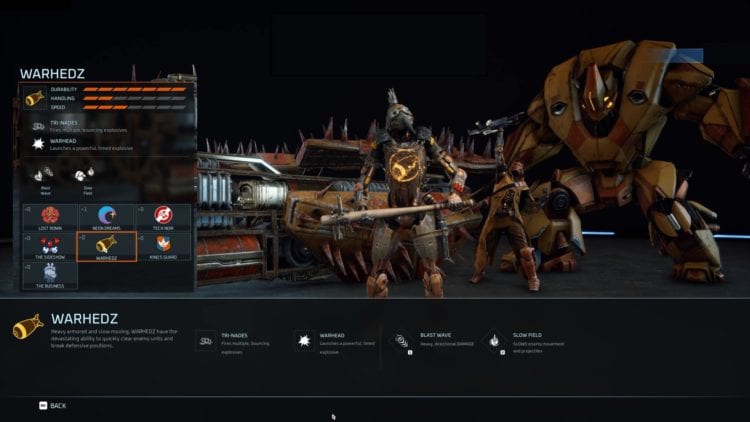 Bar none my favorite in Disintegration, Warhedz just screams “Kablooey!” The post-apocalyptic aesthetics are on-point. You’ll also notice that the Warhedz Gravcycle has extremely high durability, making it the tankiest vehicle in Disintegration. It’s a bit clunky to use when moving around the battlefield, but its armor more than makes up for this handicap.

The Tri-Nades main attack is akin to Junkrat’s primary weapon, but you fire them in three-grenade bursts. The weapon is extremely useful when enemies are clumped together in a narrow lane, as well as in close range (since they’d instantly explode instead of bouncing). The Warhead special weapon is also a game-changer. It takes five seconds to be fully charged and, once fired, it takes another five seconds before it detonates. Let’s just say that enemies caught in the blast won’t live long. 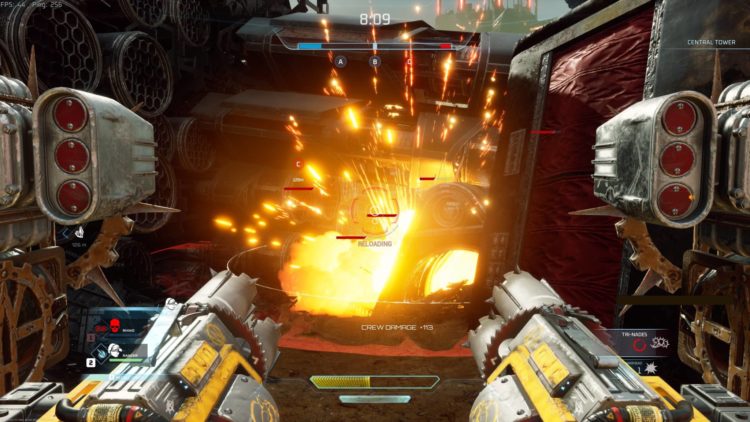 Pre-firing tends to be a given since it takes a while for the Warhead to explode. Your troopers’ skills also help. Imagine casting Slow Field to catch enemies in a net with a Warhead already planted, all while your bulky mech trooper is casting Blast Wave.

You’ll rack up kills and medals in no time because of this massive nuke. You’ll see an example below. I just waded in, cast my specials, and that’s all she wrote. The lone survivor was an enemy Warhedz due to its armored hull, but it also died within seconds after a few direct hits with Tri-Nades. 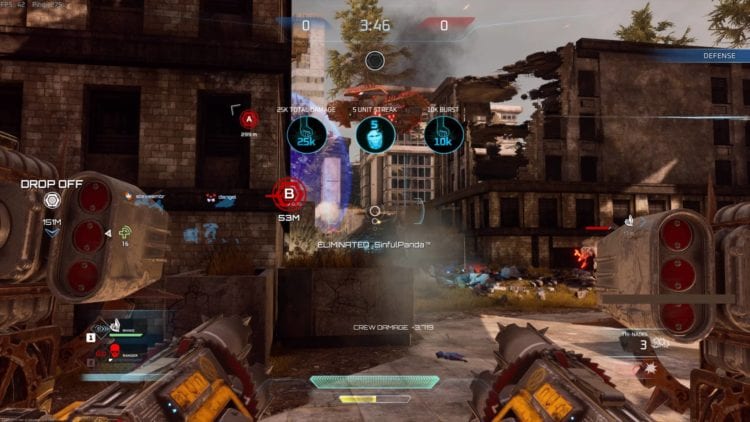 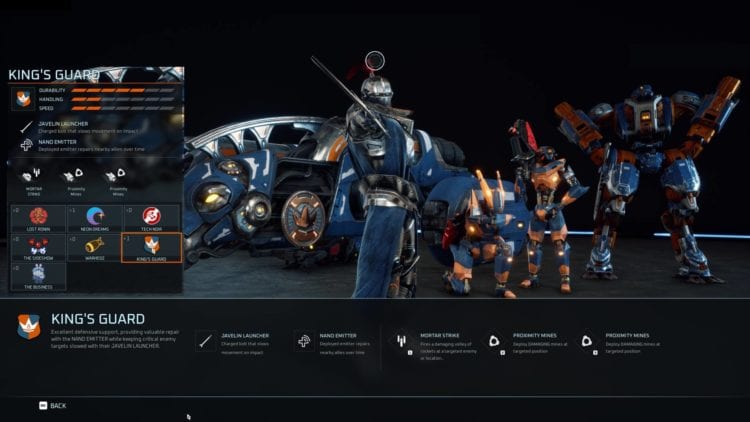 The King’s Guard crew may not be sleeping with their sisters like Jaime Lannister. But, that’s because they’re probably maesters of the Citadel who are, coincidentally, skilled with the bow.

The Javelin Launcher is a crossbow that you can charge up to do a significant amount of damage (roughly a third of the Neon Dreams’ Gravcycle health). Combine this attack with two Proximity Mines trooper skills plus a Mortar Strike, and you can quickly burst down an opponent. 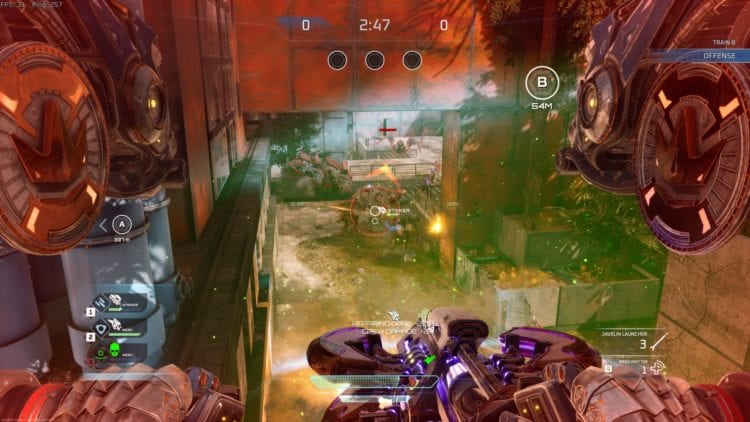 Where the King’s Guard shines, however, is with its special Gravcycle skill: Nano Emitter. Unlike the Tech Noir’s drone that heals one target at a time, the Nano Emitter casts a glowing field that heals every friendly unit inside it. That leads to improved defense and adaptability in the middle of Disintegration‘s firefights.

Note that I’m not using King’s Guard in the screenshot below (I’m using Warhedz). It’ll simply show you how the Nano Emitter becomes useful in a pinch if you’ve got a teammate who can use that when needed. I’m willing to bet that King’s Guard will be a mandatory pick in most Disintegration games. That’s how much of a necessity their Nano Emitter skill is for support. 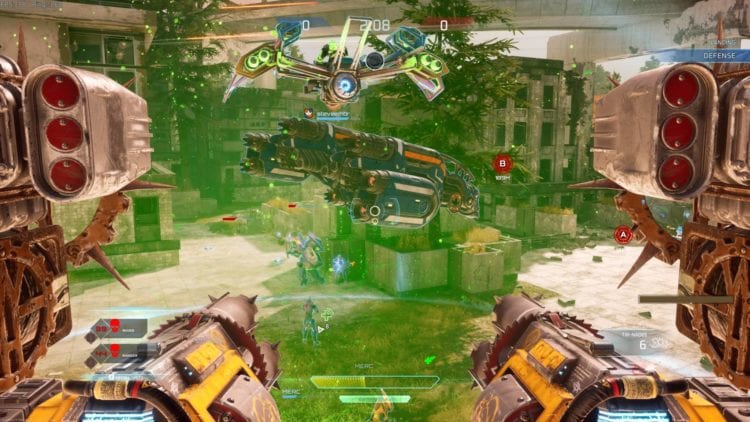 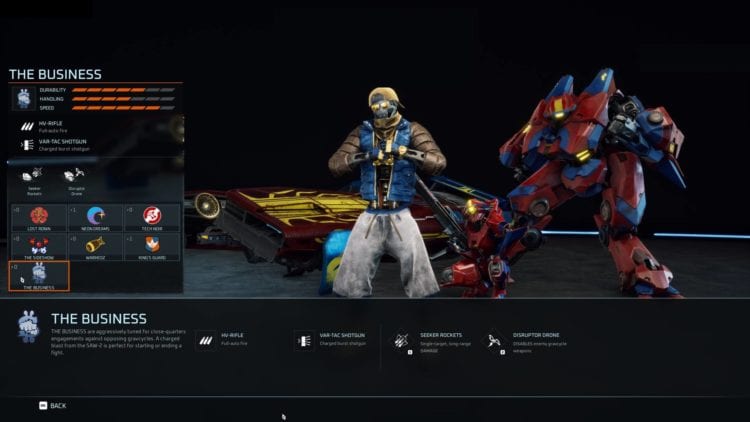 Lastly, The Business is one of those teams in Disintegration that’s very straightforward. The Business might be well-suited for beginners, too. After all, you do use their vehicle in the game’s tutorial. It’s the one Gravcycle that you can extensively practice with. 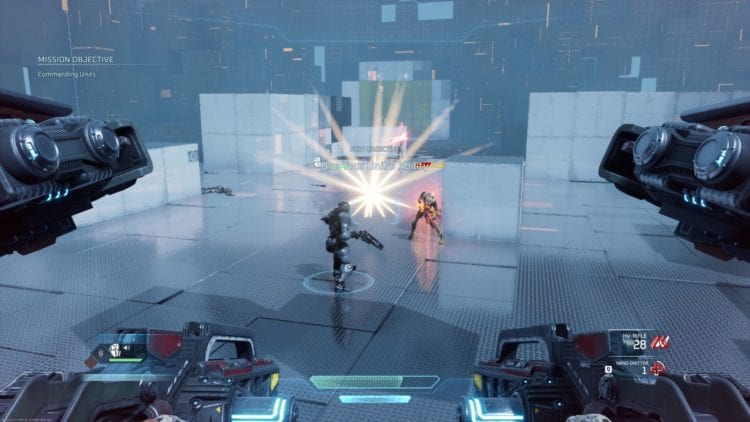 The HV-Rifle main attack is your usual run-of-the-mill auto rifle, so think Soldier-76 (or practically any team-based FPS character or class that uses an auto rifle by default). The special attack is the shotgun which does massive close-range damage.

Then again, since you’re not as durable as Warhedz and you don’t have the support skills like King’s Guard or Tech Noir, you may find yourself biting off more than you can chew. Still, the Seeker Rockets and Disruptor Drone abilities from your soldiers can aid you in Disintegration‘s 1v1 engagements. 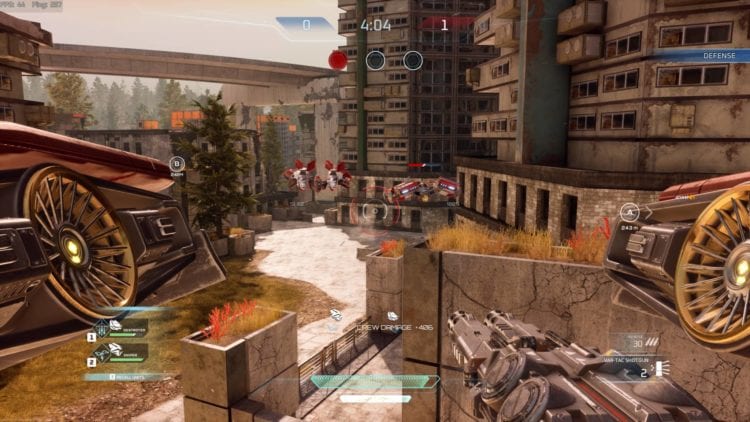 Disintegration is still in its early stages and an open beta will run from January 31 to February 1. The game is expected to release some time this year and you can find it on Steam. We’ll keep you posted with more developments.