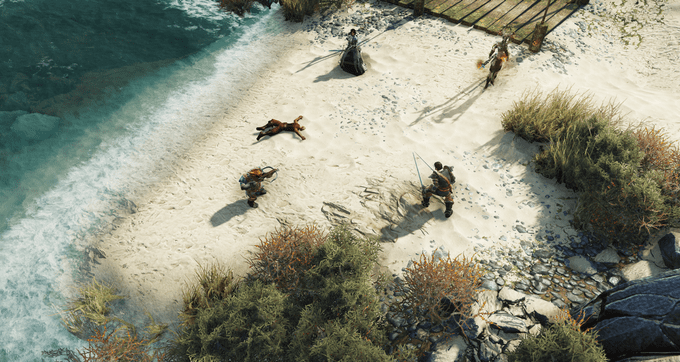 Probably more by the time I’ve finished writing this piece, since it ticks up every time I glance at it.

Divinity: Original Sin 2 is being funded by Larian, but, as they say in their “Why return to Kickstarter?” section, “the ideas that we have can be stretched a lot further than what our current budget allows for”. That’s what the pledged money will be going towards.

The pitch video gives a nice summary of how Original Sin 2 will expand on the mechanics of the first game, and suggests that the theme of this title will be character origins and how they affect your chances in life. Part of character creation this time around will be determining your race and origin story.

In the video, the four-player party consists of two humans, an elf, and a dwarf. One of the humans is known to the village the party is trying to enter and gets in easily. The other human and elf blag their way in, but the dwarf (due to some recent unrest involving his kin) is not welcome and has to find another route inside.

In Divinity: Original Sin 2, there’ll be four player co-op options – as well as ambitious chances for antagonistic and competitive play. In the example video, the dwarf player actually starts pursuing a narrative thread that runs counter to the one the main human player is following. It’s also implied that this can occur in single player (where, presumably, you’re making a decision to role-play as party members who are working towards different aims).

It’s sounding pretty intricate, and rather interesting. There’s also no compulsion to play competitively, so if you want to play as a party who are pulling together as much as possible that’s an option too.

The much-celebrated combat of Original Sin will be expanded in the sequel to include more skills and spells, as well as abilities like pushing and pulling enemies into elemental traps, and a cover system.

For more details, and the video pitch, have a look at the Kickstarter page.