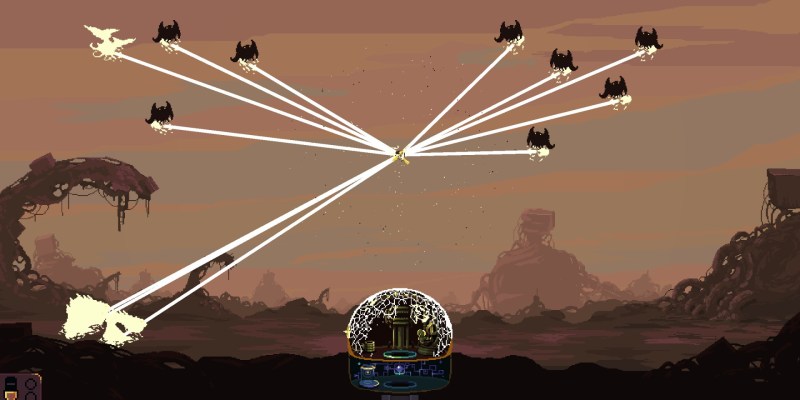 Two-dimensional mining games are a bit of an unsung niche. My absolute favorite is Miner: Dig Deep, which got a Steam release the other year. The gist is that you play as someone drilling through dirt in an attempt to find valuables that can be used to upgrade their gear. It’s an enduring, satisfying focus. Dome Keeper takes this, packages it in a rogue-lite format, and adds in surviving against increasingly powerful waves of monsters. The game makes for an effective, tense experience that can easily see you sinking hours into runs with new permutations and more favorable RNG.

Dome Keeper‘s setup is mostly explained by the above paragraph. Your character plummets onto a planet, immediately setting up a dome. There are two main game modes: relic hunter and prestige. Relic hunter requires you to excavate the bowels of the area you’re in to find a giant relic before you escape the planet. Prestige is a twofer: you either need to find enough resources to return home, or you can try your damnedest to get a high score by earning points through sending resources to your home planet and surviving enemy waves.

Resources come in three varieties: iron, cobalt, and water. Iron is mostly used for upgrades. Resources can be used to improve your dome, your character, or whatever usable relics you find. You can give your dome more health or better defenses, improve your character’s drill, speed, and carry capacity, or improve said relics to give you a better chance of survival. Cobalt is mostly used to repair your dome from damage received during enemy assaults. Water is typically used in conjunction with iron to improve various things. It pays to have all three, although iron is easily the most useful by a fair margin — and the most plentiful.

Down to my last

Using your drill, Dome Keeper sees you frantically digging in the dirt to unearth resources while awaiting the inevitable enemy strike. When you find said resources, you’ll need to make the long trek back to your dome with them in tow. Without upgrading your carry capacity, you can only move briskly while dragging four units with you. Upgrades let you carry a couple more. It’s really quite pulse-pounding to be frantically searching for resources while the time until the next attack arrives. I always bought the wave timer upgrade first, as it tells you how soon an attack is coming.

Naturally, this means you have to stop mining and make a beeline for your dome. There are two defensive systems in Dome Keeper: a laser and a sword. The laser is exactly what it sounds like. You move it around to shoot enemies that approach the dome from both land and air. The sword is quite different and requires you to either slice or stab, depending on whether enemies are airborne or not. You can only unlock the sword (and the aforementioned prestige mode) after having at least one successful run, which isn’t honestly that hard to pull off.

The sword is much harder to use than the laser, but it’s also more powerful and can deal with more enemies at once, for the most part. Of course, enemy waves get stronger and stronger as you go, so you’ll need to keep upgrading your weapon if you hope to survive. The sword is stronger than the laser overall, I’d say, as long as you’re able to aim the thing. Granted, you can buy an upgrade that lets you see exactly where the stab function will send the blade careening through the air before being pulled back.

There are multiple kinds of enemies in Dome Keeper. Some approach the dome and use melee attacks, while flying enemies pelt it with projectiles. There are tiny enemies that throw themselves onto the dome before exploding. Another shoots out of the sky and stabs your dome. They show up at different times in different runs, so they’re great at keeping you on your toes. But you won’t survive long if you don’t find cobalt. While iron is almost always found in large clumps that increase in size the deeper you go, it’s not abnormal to only find one cobalt deposit at a time with only one or two units of the stuff.

Each individual piece of cobalt can repair your dome by 15%. You’ll often find yourself down to the wire where the next enemy attack will end you, meanwhile, you’re desperately searching for even a single piece of cobalt before the attack begins. Cobalt can also be used to purchase automatic repairs. But they’ll only kick in if a certain amount of damage is done to your dome in a single attack, so these upgrades won’t necessarily save you. As such, I preferred to stockpile cobalt for normal repairs.

Initially, the only map size available for your runs in Dome Keeper is quite small. Due to this, you can expect a relic hunter run to last between 30 minutes and an hour, depending on skill and RNG. Completing a run will unlock a single permutation. In addition to what I described previously, you’ll also get new types of gadgets for your dome. The default one is the shield dome, which lets you take a certain amount of shielded damage at the start of each enemy wave. Others include a repellant gadget that keeps enemies at bay, which is quite handy for anyone who simply wants more time to dig.

Dome Keeper is one of the better, more unique rogue-lites that I’ve had the pleasure of playing, and people fond of mining games will get the most out of it. It really does a fantastic job of adapting the niche to a rogue-lite without it feeling forced. That being said, it can hurt to have to start over from scratch time and time again. When you’re used to moving briskly and easily drilling through the ground, chipping away can feel quite slow. Thankfully, you get to keep one of your relics each time you fail a run. My favorite is a portal that lets you warp back and forth. It’s great when you don’t want to take any chances once a wave is at your doorstep.

Dome Keeper is an excellent rogue-lite for fans of 2D mining games.