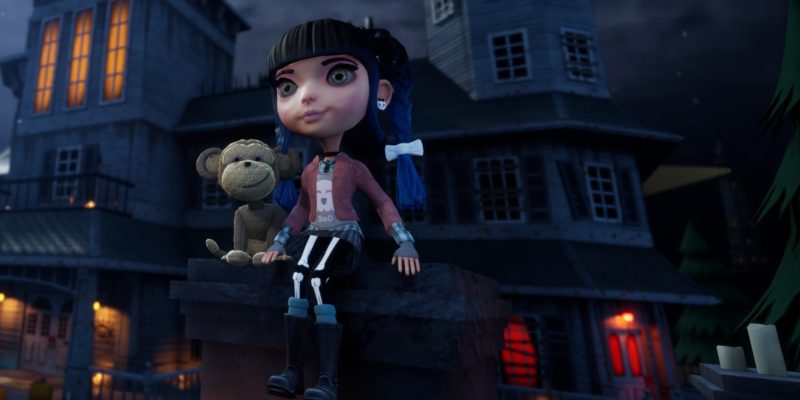 There’s a subtle art to making an action roguelite. Some – like Enter the Gungeon, Nuclear Throne, and The Binding of Isaac‘s initial release – get it right. Others – like the criminally underrated Our Darker Purpose and The Binding of Isaac‘s later releases – have issues that prevent them from really coming together as well as they could. Right now, Don’t Die, Minerva! (and we’ll dispense with the punctuation from here on) is very much in the latter camp.

That may not be much of a surprise, and it’s hardly fatal. As of today, Don’t Die Minerva has only just entered Early Access. There’s a long road ahead of it, and this is a promising and occasionally charming start despite the vast number of issues. 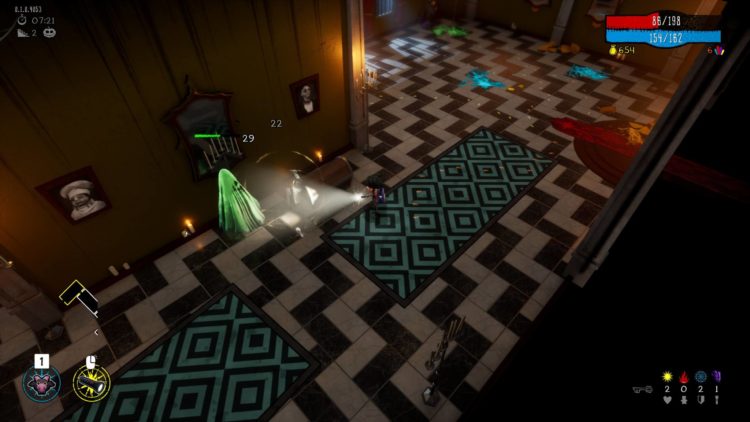 Bedsheet ghosts versus a plucky child with a flashlight. I’ve seen enough cartoons to know who’ll win this one.

“Charming” is also how I’d describe the aesthetics. Don’t Die Minerva goes for a creepy-cute vibe, a sort of Scooby-Doo cartoon horror. The titular Minerva is exploring a haunted manor full of flapping bats and bedsheet ghosts, while Minerva herself has a doll-like appearance and a flashlight for defense. There’s something quite Coraline about the whole thing, albeit a lot less unsettling. It’s a really delightful style.

The rote gameplay is basic twin-stick shooter stuff, but Don’t Die Minerva has a lot of twists and quirks. The biggest of the lot is Minerva’s stuffed animals. Through the power of the mansion, her stuffed toys are brought to life and can be used as turrets and minions.

Each toy functions in a different way. The monkey is stationary and flings bananas, while the bear has a very short range but a powerful area-of-effect stomp. The dragon soars in a set direction but will pause and attack anything that gets in its path. Each has its uses and foibles; setting up a bear in a choke point can be tremendously useful, but in a wide-open arena you’ll have to kite enemies towards it for it to be of any use at all.

Don’t swap out that backpack, Minerva 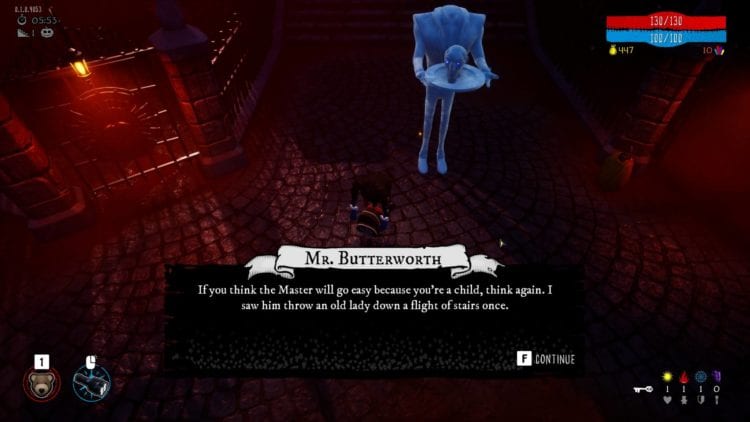 An old person is the opposite of a child, though, so I’m sure we’ll be fine. And anyway, who hasn’t done that?

The other major choice you’ll be making during your run is what gem to slot into both your weapon and your toys. Other than the general passive effects like increased health, these actually change the way your attacks work. Purple gems trigger a chain lightning effect, striking multiple enemies, while yellow knocks foes away from you. Many also combo with each other – lots of gems will do extra damage to enemies that are chilled or frozen, so setting different things up between yourself and your toys is rather helpful.

Don’t Die Minerva is also very granular in terms of upgrades. One piece of rare level 3 kit (yes, items have rarity) won’t necessarily be the same as another. It may have +28% crit chance against +16% bonus damage, or something similar. This means that, while you might prefer wielding a bulb cannon, finding gear with better stats might encourage you to swap to a weapon you’re less comfortable with.

And that’s without going into the elemental affinities of each piece of equipment and each gem, which can give massive stacking boosts. Purple equipment and gems mean a more powerful flashlight, while opting for yellow will give you a more sizeable health pool.

Don’t rest on your laurels, Minerva 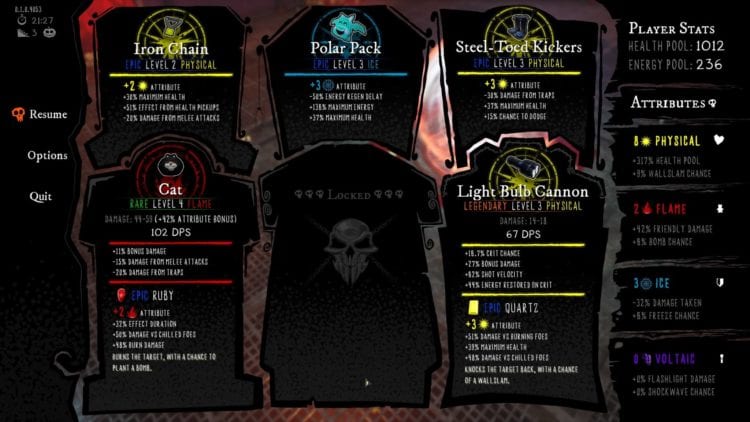 Honestly, this resembles an ARPG character sheet more than an action roguelite’s list of items. Whether that’s good or bad is really up to you.

All of this is pretty neat, even if (like me) you don’t particularly like granular upgrades. Don’t Die Minerva has plenty of unique mechanics that help it stand out. Or it would, if it weren’t for the flaws.

Let’s start with the things that are almost certainly going to be fixed during Early Access. There’s a fairly limited number of enemies and rooms at this point, and a few of them are incredibly annoying. (Literally anything with an invincible directional shield, for example, even if that does force you to use your toys.) There are a smattering of bugs and a fair few pacing and feedback issues, and runs feel really luck dependant. Sometimes I’ll find loads of gear on the very first floor, but other times I’ll only get one or two mediocre upgrades.

On that note, some more weapons, toys, and unique upgrades that change your playstyle would be lovely. Right now, everything is more than a little samey after an hour or two. One weapon is pretty similar to another. 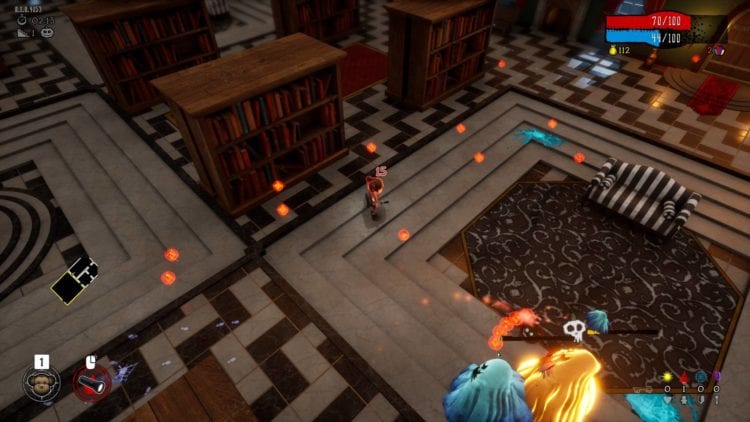 It’s very, very hard to tell where those bullets are going to hit, and while I can see in the distance quite far upwards, downwards is much closer than I’d like.

One of the things we probably won’t see fixed is the isometric camera. While this is stylish and provides a nice look at the 3D environments, it’s also kind of a problem in a game of this nature. It makes it really hard to tell if you’re in the path of a bullet or not, so there’s always a bit of loud swearing when an attack hits you from an angle that didn’t appear possible. More problematic is that anything off the bottom of the screen is both very close and very hard to see – and considering the speed of some attacks, this can make some damage seemingly unavoidable.

Worse, enemies spawn in waves. Killing the last enemy on screen may trigger more to spawn in, and one or two of them are probably below you… which you won’t know about until you walk into them or they hit you. 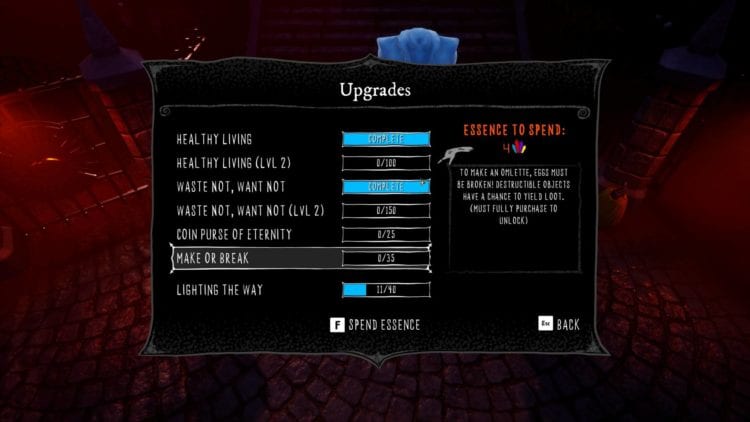 Why do I need to do several runs just to add loot to destructible objects? Isn’t… isn’t that just standard?

There’s one thing I really, really want fixed, though, and that’s how much Don’t Die Minerva gates off the fun. As is traditional with roguelites, the more you play, the more fun things you unlock. The problem is that half of these things shouldn’t need to be unlocked. And the other half take forever.

I can kind of understand the devs locking away your ability to have a second toy, even if it both takes dozens of runs to unlock and hides away one of the most unique things about the game. But opening secret doors and teleporting back to cleared rooms? Those aren’t fun unlocks. Those are fairly basic mechanics, and spending multiple runs to unlock that stuff is rubbish. 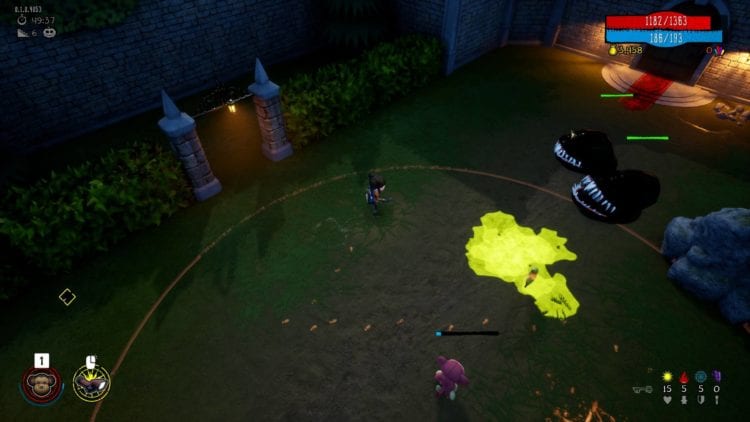 I have to say again how much I like the setting and style, though.

The basics for something that can stand on its own are present, then, but they’re missing a lot of what’s needed to tie them together. Don’t Die Minerva very definitely feels like an Early Access product.

At this exact moment, it feels a bit generic and empty, but all of the ingredients are there. More content, more variety, a touch more style, and a lot less time-wasting will hopefully bring everything together throughout Early Access. It’s worth keeping an eye on, but this mansion should perhaps remain locked for a little longer.