Our protagonist, Wilson, has been dumped into a hostile wilderness. No idea how. No idea why. All I know is that he’s lying on the ground, either unconscious or asleep, when a devil-like chap appears and warns him that he’d better find some food before nightfall. Then we’re on our own. Now, I’m the perfect person for this – I’ve been camping once or twice, so I’m clearly like some sort of Australian-Manx Bear Grylls. Only with less pee-drinking.

To begin with, Wilson has nothing save for a line of empty inventory slots. Everything’s controlled a bit like Diablo or Torchlight; you click to move, click to pick things up, and click to attack. Just about everything is mouse-controlled, with a few keyboard shortcuts. Currently unable to find the keyboard shortcut that lets me drink my own pee, so I guess I’ll have to find actual food sources soon. 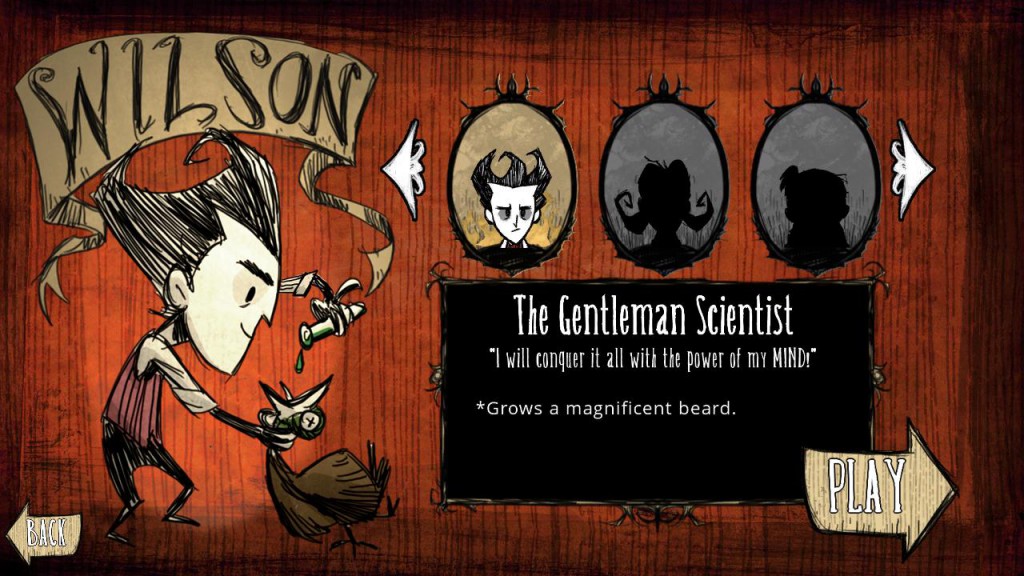 There’s a clock and some displays for health and food over on the right, but the most intriguing bit of the interface is a crafting menu off to the left. Five tabs expand into recipes for tools, bits of survival kit, light sources, and a load of other gubbins that should make survival easy-peasy.

So, to start, we’ll get our bearings. Wandering around reveals a plethora of harmless wildlife – birds, butterflies, and little horned rabbit things – which run screaming whenever I approach. There’s also plenty of raw materials lying around; before long I’ve got a load of cut grass, some twigs, some flowers, a load of carrots and berries, and a few flints. By now parts of the crafting interface have lit up green, so we’ll see what we can make.

Quite a lot, apparently. We only need twigs and flints to construct basic tools like axes and mining picks, and these give us access to more materials – logs, pinecones, rocks, gold, etc. And with these, as dusk falls and Wilson whines that I’d better think about making a fire, I’ve got enough to build a basic campfire. So I do. 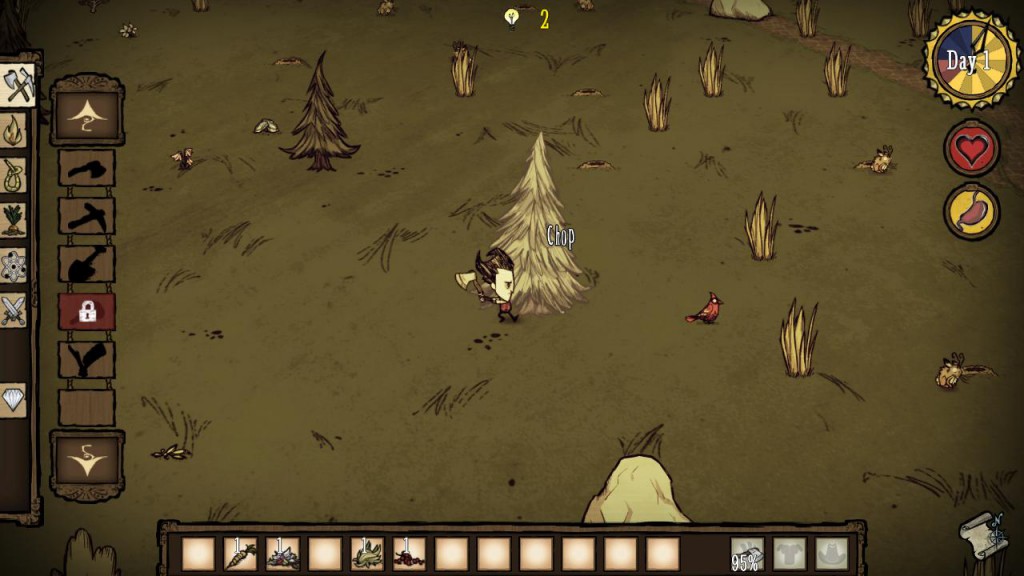 Once night falls, everything goes… dark. Really dark. Barring things illuminated by the occasional dancing firefly, it’s hard to see anything outside of the circle of light afforded by the campfire – and even that light seems surprisingly dim. The fire does go out after awhile, but we can pile on flammable stuff to keep it burning.

Still, there’s nothing to do right now. I’ve got Wilson sat around the campfire, waiting for dawn. So let’s have a look around and see if we can maybe scavenge a few materials, because waiting is boring and rubbish. 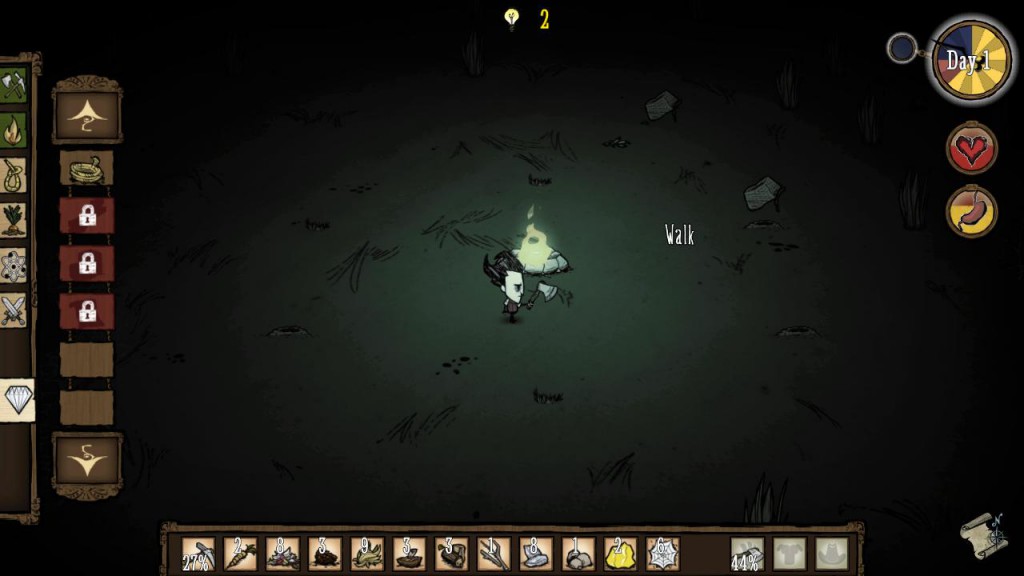 Memo to self: stay in the light.

Last night’s moonlit stroll was short, if only because – after wandering around for a moment – Wilson started hearing things. These completely invisible things then hit him, halving his health. I sent him scarpering back to the safety of the light a moment later and huddled there, crying, until dawn.

Today, then, the plan is to try building some of the weirder stuff and experiment a little more. Most of the materials around here are a little tapped out, so I take Wilson a bit further afield to find more rocks to smash and more vegetation to deforest. It’s about this time I start to take a shine to Wilson’s “examining” dialogue – checking out the stump after cutting down a tree, for instance, has Wilson cry “Take that, nature!” and I think we can all agree that this is excellent.

It’s not long before we’ve got the materials to assemble a SCIENCE MACHINE, and although I have no idea what this does, I think we can also agree that science is great. 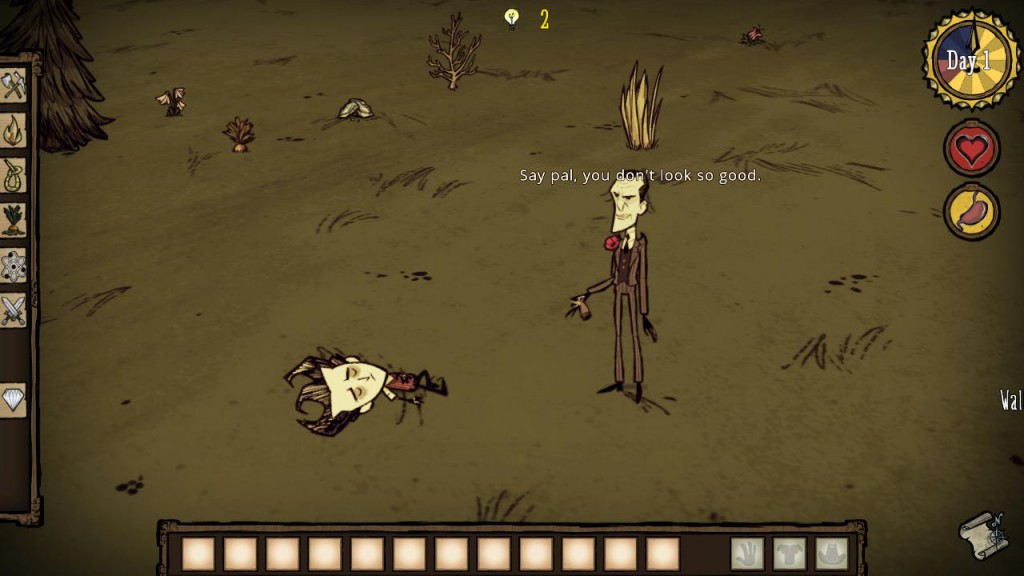 As it turns out, the Science Machine is a way to get more recipes. Everything you find can be dumped into it and destroyed in exchange for research points, which you can then spend on unlocking new items. While hats are always tempting (as Valve learned with Team Fortress 2) I figured that a straight razor would be a good start, and I only have to Science-ify a bunch of petals to get the required number of points. Wilson’s not looking too scraggly at the moment, but maybe I can use it as a weapon – and if not, I can probably start a criminal gang or something. Wilson’s a scientist, but I’m sure he’d benefit from the experience of hanging around street corners and threatening the elderly.

So, perhaps it’s time to go hunt some monsters. I’m sure they’ll be a dependable source of food, since I still haven’t found a way to drink my own urine. Even if the razor doesn’t work (and it doesn’t look like I can equip it, so depressingly, that may be the case) then I have an axe. What could possibly withstand an axe?

What’s that big webbed thing over there? A spider cocoon?

Pros and cons, then. On the plus side, I was right – it was a spider cocoon. On the downside, hitting it caused three spiders to leap and start chasing me with their stubby little legs. Despite raging arachnophobia these aren’t exactly the scariest spiders in gaming; they look like angry hairballs with teeth. On the downside, Wilson’s axe barely managed to take one of them down before the other two ripped him apart. On the other plus side, I’ve now learned that survival will probably require me to kite enemies around while occasionally hitting them. So hey, I’ve learned something. Net gain.

Wilson’s learned something, too. Despite his sudden and painful death, starting a new game in the same world has apparently not reduced Wilson’s knowledge – he’s still got a few research points, and he still knows how to make a straight razor. So, hey, at least that wasn’t too much of a setback.

Oh, and death also gave us some experience, which looks like it’s going towards unlocking an extra character. So that’s nice. Now I don’t feel too bad or stupid or awful.

This time, though, we’re going to do things properly. Instead of a crappy campfire, we’ll use some rocks and build a firepit. We’ll use a shovel to uproot berry bushes, saplings, and grass, and we’ll plant it near to there so that I’ve got stuff I can easily harvest when it regrows. We’ll plant the pinecones around there too. We’re going to build a home. And then I’ll figure out where the Drink Pee button is. 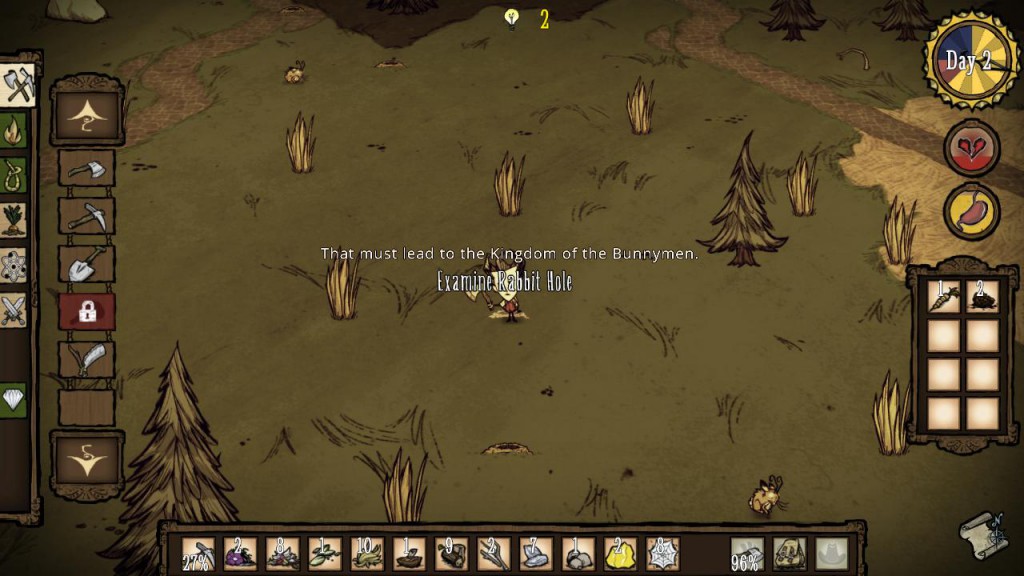 Things have been going surprisingly well. The firepit can be relit simply by dumping materials into it. We’re getting research points by throwing spare materials into the science machine. Weaving a couple of traps has let me capture the horned bunnies that keep running away from me, guaranteeing a bit of a food source, and I’ve even managed to take down a few spider cocoons and get some unappetising “monster meat”, as well as some silk. I’ve even figured out that I can cook most food items on the fire, which seems to make them more effective. Things are looking up.

So, at this point we’re going to… what’s that barking sound? 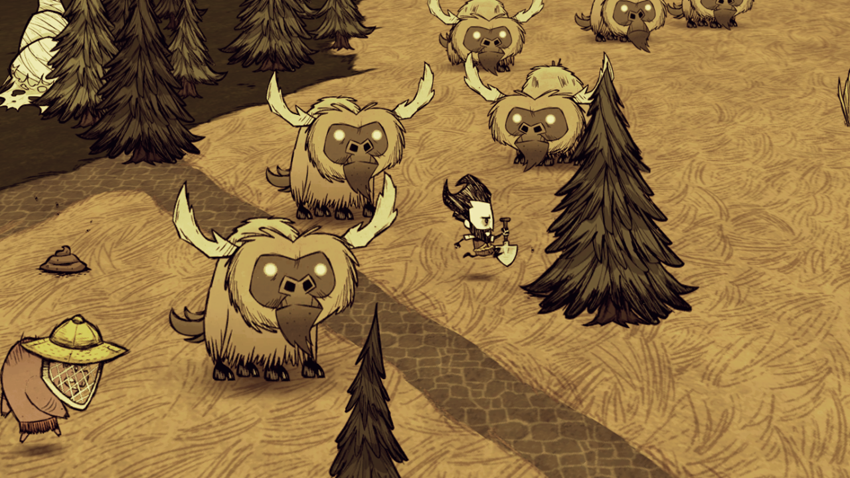 Don’t Starve is… interesting. Very first impressions make it look akin to something like Minecraft or Terraria in that you’re constructing things in order to stay safe in an increasingly hostile world, but it’s quite a different beast to either of those – there’s no terrain deformation, and you’re not building houses or anything. The constant pressure of finding food is an early burden, but the ability to set up farms and traps, as well as move berry bushes and the like, means that I don’t think it’s as much of a problem as it appears.

What is clear, though, is that I’ve only scratched the surface. There are a wealth more creatures to see, items to use, characters to unlock, things to build, and survival strategies to uncover. Every time I think I’ve got something figured out, there’s always something else I could do with it. At first, I tried fighting spiders directly. Then I realised kiting them would work better. Then I realised I could just wait until they naturally come out at dusk, and pick them off one at a time.

The art style and general production values are also worthy of praise. Animations and art are both dinky and stylised; while they’re not going to compete with an AAA-developer’s RealityIsBrown engine, they’re not trying to. This art evokes a very particular tone, and it works wonders for the game. The same goes for the minimalistic sound effects, like the musical “voice acting.”

I’m a little worried that it might be a tad repetitive, but constant updates are adding in new mechanics and new Things, so that’ll hopefully be less of a worry when the game launches. Right now, Don’t Starve is currently in early-access beta. $11.99 will net you two codes for the game, both of which give access to the beta and both of which will upgrade to the full version when it launches in “late March 2013.”

Meet the GODUS team, 12 days to go and some game footage

By Martynas Klimas9 hours ago
Previews

By A.K Rahming13 hours ago
Previews

By Jason Rodriguez17 hours ago
Previews