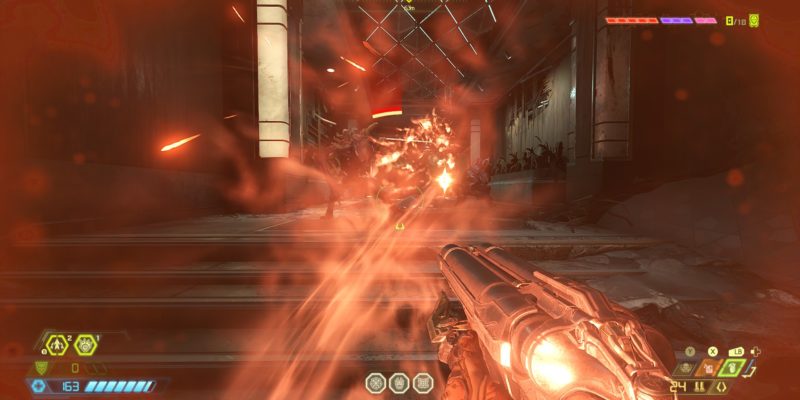 There are a lot of options that allow you to make Doom Eternal fit your play style. But which ones are best when it comes to each category? Let’s break it down by sharing our favorite mods, runes, and suit upgrades. 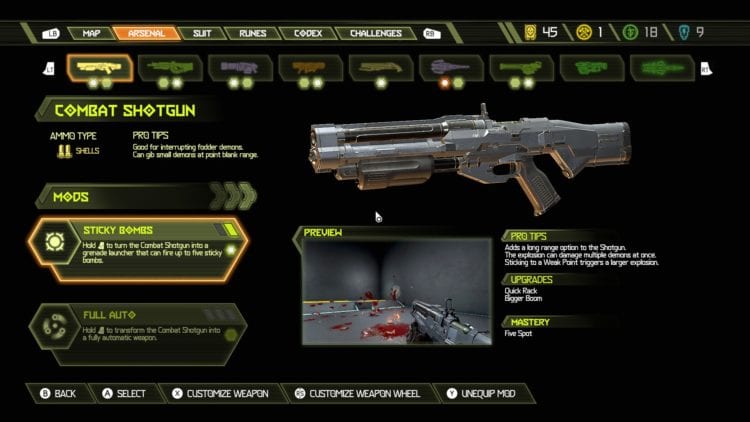 Each major weapon in Doom Eternal has two mods to choose from. Many of these will make your life a hell of a lot easier. First off, you’ll want to grab the sticky bombs mod for the shotgun as soon as you can. These behave exactly as you’d imagine, sticking to an enemy for a bit before exploding. This is not only a great way to do hit and run damage, but it also blows off certain parts of your foes.

The sticky bomb mod works best with the Arachnotron, which has a turret on its back. Hitting it with one sticky bomb will take it out of play immediately. You can also use sticky bombs to easily remove the Revenant’s shoulder cannons.

Another excellent choice is the precision bolt for the heavy cannon. Honestly, you could use this interchangeably with the sticky bombs for enemy weak points, but it’s a fair amount riskier. It’s better to use it on the Mancubus, as it can blow his arm-mounted weapons clean off. However, it’s also extremely useful for landing a quick headshot on far-off enemies. Headshots that kill enemies can be upgraded to start a chain reaction, which can be very handy when trying to conserve ammo.

The lock-on burst for Doom Eternal‘s rocket launcher also works well. You simply lock onto an enemy, then fire a quick volley of three rockets. It’s a great way to do tons of fast damage. The lock-on doesn’t take long, either, and upgrades can reduce how long you have to wait before unloading another salvo. The plasma gun’s heat blast also serves as an excellent mod choice. After firing off plasma rounds, you can disperse the built-up heat – with no additional ammo cost – to do a hefty amount of damage. 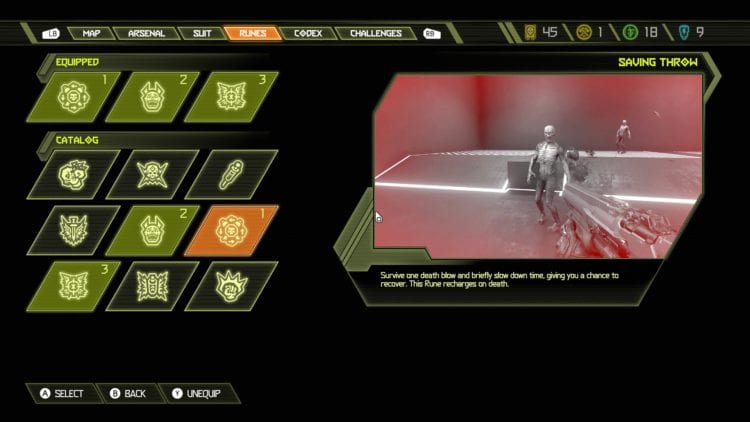 Doom Eternal only lets you equip three runes at once, but they can be absolute lifesavers. The one you should get immediately is called Saving Throw. When you take a blow that’s normally fatal, this instead leaves with just a single health point and makes time slow down.

This almost always grants you the leeway needed to damage an enemy enough for a glory kill, which will fill your health back up with time to spare. Saving Throw is probably the single most important upgrade in the game and will mean the difference between life and death very frequently. You can only use this once per battle, though, as taking a second fatal hit will kill you.

Then there’s Dazed and Confused, which keeps enemies staggered and vulnerable to glory kills for longer. This means you won’t have to rush as much to reach a staggered foe, and it can keep them off your back for longer. Chrono Strike is another good one, letting you slow down time in mid-air. Naturally, this allows you to deal a lot of extra damage to a fearsome enemy with more accuracy than you might have otherwise.

Other runes are also very useful, such as one that reduces the cooldown of grenades and the flame belch if enemies are killed by or under the influence of them. You can also launch glory kills from further away or even make it so that enemies killed by the blood punch drop more health. 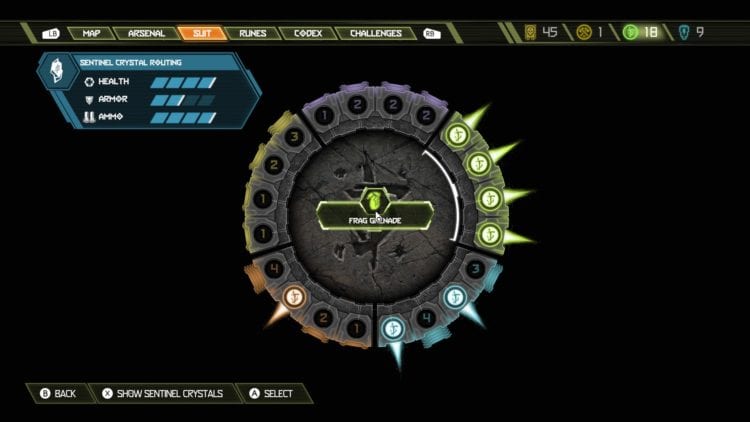 There are a number of upgrades to put your Praetor Tokens into, but many of them aren’t all that useful. Just like the last game, Doom Eternal lets you climb faster, survive hazards more easily, and expand your mapping capabilities. All of those are of questionable helpfulness, though.

On the other hand, grenade upgrades are extremely useful. For the regular grenades, you can make it so that enemies killed by them will spawn even more grenades, making them even more deadly. On top of that, you can unlock a second charge, which gives you a second grenade.

For the ice grenades, you can reduce the cooldown, increase how long enemies remain frozen, and increase the damage that enemies take from attacks while frozen. The grenade upgrades can massively increase your killing potential and crowd control, making them well worth pumping your earlier tokens into. 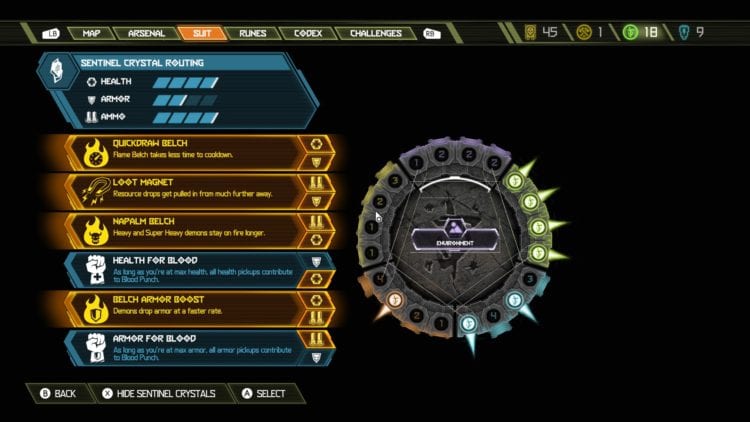 Health, ammo, and armor each have four levels, with each crystal you find giving you both one point and one upgrade level in one of six perks. As for order, you should probably get your ammo up immediately. Ammo management is tricky for the whole game, so it’s very helpful to have some extra rounds to fall back on. After getting your ammo up, go for health next. You’ll be pulling off glory kills left and right, so the more health you have, the better off you’ll be.

As for perks, you want to reduce to the cooldown of the flame belch early, as that will just mean more armor for you, which gets melted off very quickly. The napalm belch also keeps heavy enemies on fire longer, which will net you even more armor in the long run, making that one easy to recommend. Having extra health pickups fill up the blood punch meter will also come in handy, but that isn’t difficult to fill up to begin with, so your mileage may vary.

Doom Eternal has a fair amount of upgrades to manage, but keeping what’s laid out here in mind is a great way to give yourself more of a fighting chance. That said, a lot of it comes down to personal preference. Everyone will have their own favorite upgrades and things to focus on. Make sure to tell us in the comments below which ones you think are best.

By Blake Grundman1 hour ago
Guides