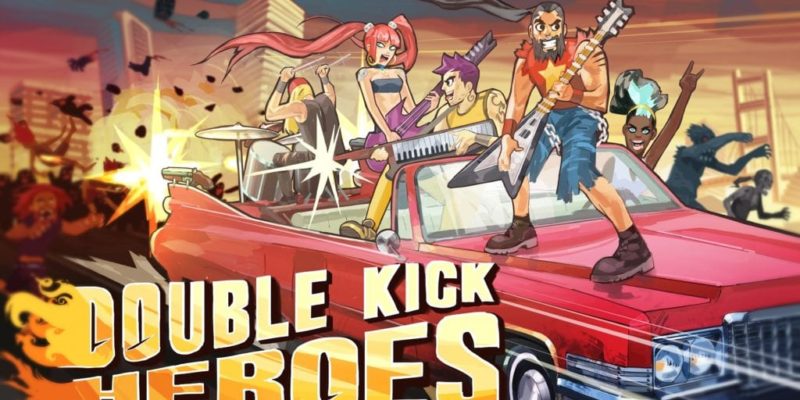 Zombies are perhaps a little overdone right now, but I think you can make an argument that Double Kick Heroes has found a unique niche. For starters, it’s a rhythm-action game. A rhythm-action game in which you play a metal band in a post-zombocalypse world. A band that drives a Cadillac, playing music as they go, with weapons fired by the drum beat to forcibly dissuade the zombie hordes from pursuit.

It’s a novel idea, and based on a couple of hours of play, it works pretty well. Markers indicating the kick drum scroll along, and you tap different buttons to fire either the top or bottom gun on the Gundillac. On later levels, snare and cymbals beats are added in to let your bandmates get in on the action by hurling grenades or sniping foes. 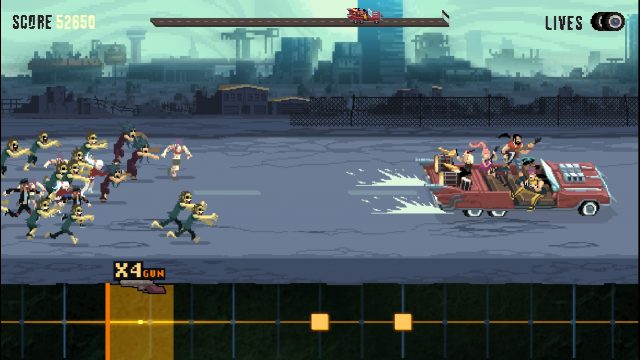 Oh, sure, it looks simple in this screenshot…

In terms of raw mechanics, then, Double Kick Heroes is pretty traditional: beats scroll along and you press a button at the right time. Nonetheless, there’s a lot that makes this a rather unique take on the genre. On certain levels you can steer the car, for instance, forcing you to aim or dodge attacks, but more important is that missing beats isn’t arbitrarily penalised by failure.

Missing a beat lowers your combo – which lowers the damage your gunshots do – and mashing buttons temporarily locks you out of firing, but none of this directly impacts your health or eventual success in a level. Success is measured entirely on whether or not you reach the end (and potentially kill a boss) before zombies catch up and kill you.

I haven’t played enough to make certain, but the biggest difference between the difficulties also seems to be the number of zombies and how much the game punishes you for missing a beat. The drum charts seem fairly consistent across the difficulties, for better or worse, but on higher difficulties you absolutely need to keep your combo up in order to take out the zombies before they reach the car, as well as making sure you’re firing the right gun to hit the most foes. 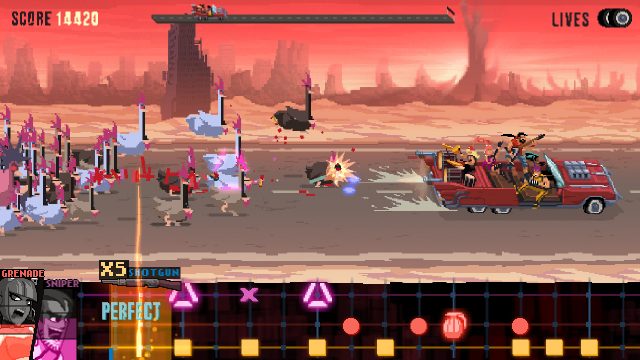 … but up the difficulty and add in snares, cymbals, and terrifying zombie chickens, and Double Kick Heroes can start to overwhelm.

All of this is neat, but a rhythm-action game lives or dies on its soundtrack. This is where Double Kick Heroes is likely to either hit its biggest snag, or – possibly – find its biggest benefit.

The downside: being a fairly small title, the devs can’t exactly license a huge amount of popular rock and metal music to go along with your zombie-smashing, which means that most of the tracks in the campaign are a little generic. The upside: there’s a full-fledged level editor, allowing people to create custom charts for basically any song in the world, as long as you have a compatible mp3 (acquired legally, of course).

In the preview version, there are eight or so example drum charts for some well-known songs, and slotting in my (entirely legal) mp3 of Tenacious D’s The Metal let me… well, fail miserably at playing Double Kick Heroes while listening to The Metal. This is more to do with my skills than anything else, though. 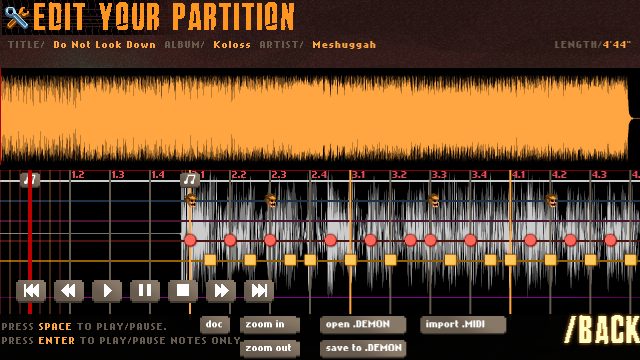 I haven’t spent much time with the editor because I am crap at these things, but it’ll let you assemble levels based on whatever song you like and make them as difficult or simple as you desire.

In short, if Double Kick Heroes takes off and manages to settle into its niche with a dedicated following, then you’ll hopefully be able to ride along to pretty much any popular track (AC/DC sometime, please). If not, then you’re probably going to be stuck with a fairly limited number of songs, many of which may not be to your taste.

All of this aside, there are two primary ways to play. You can opt into the Campaign, which gives you a big world map, conversations between characters, safe houses, and a plot of sorts. It’s not the most exciting or well-written thing, but I’ve enjoyed seeing caricatures of celebrities popping up as side characters, and there are plenty of little references and nods to pop culture. The alternative is Arcade, which ditches the story entirely and just has you play through the levels in a linear fashion,

If I have one genuine complaint, it’s that the two aren’t actually tied in any way. While I can understand beating songs on Arcade not necessarily counting as beating them in the campaign (as you’d be missing out on chunks of plot), it would at least be nice if beating a level in the campaign unlocked it on that difficulty in Arcade. I’d also quite like it if beating a level on one difficulty in Arcade opened it up in all difficulties – or at least the lower ones. Unlocking songs once is one (entirely understandable) thing; unlocking them on every difficulty individually is another. Hopefully, this’ll be patched in later. 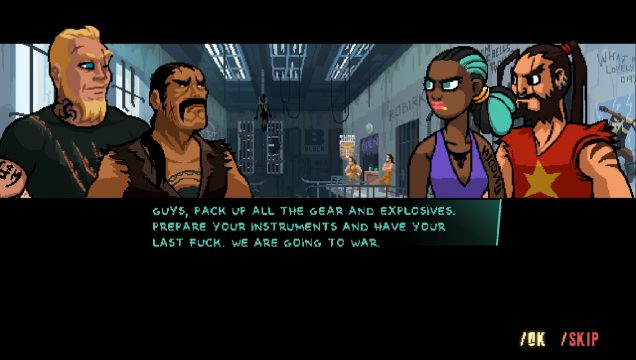 You’ll spot a few fairly familiar faces throughout the campaign.

There are two other little niggles, but both of these can be mitigated somewhat by “I need to get better.” First and foremost is the control bindings.

Playing on a mechanical keyboard is intensely satisfying, with the loud clicks of the keys syncing up nicely to the beat, but I’ve yet to find a keyboard layout with which I’m entirely satisfied. By default, the up and down arrow keys steer, while left and right are used for the bottom and top guns. CTRL and Shift, meanwhile, are set up for snares and cymbals. This isn’t the most intuitive layout, but despite fiddling around with the bindings, I haven’t really found a simpler one just yet. Some of this may also come down to the horizontal scrolling of the notes, which is a little unorthodox for games of this ilk, but is entirely justified here by the second “I need to get better” issue.

That second issue is that, on higher difficulties in particular, you really have to pay attention to two parts of the screen at once. With most rhythm-action games you don’t have time to gaze at the pretty backgrounds and action taking place, as you’re focused entirely on the note chart. Here, however, the action taking place is really important, because you need to make sure you’re firing the correct guns to hit the most zombies while steering away from boss attacks. On more difficult songs with faster charts, this can get a little ludicrous, especially when you’re also not quite comfortable with the key layout. 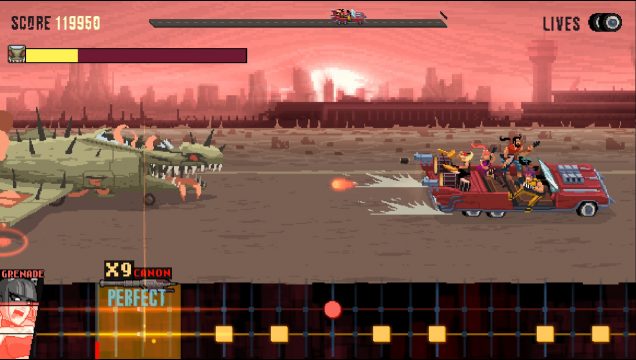 But I’d urge you not to take these as big, insurmountable issues. Feeling mildly overwhelmed by everything is pretty much a given with any new rhythm-action title, and finding a set of controls I like is something that’s going to take a bit of time. Likewise, patches and community support (or even official note charts for “premium” songs) should ease out some of these teething issues and add a load of music you want to play.

Double Kick Heroes isn’t there yet, but it has the crux of a really unique take on a genre that’s still reeling a little from the over-saturation of the Guitar Hero years. If nothing else, fans of the genre should keep a careful eye on this one.

The game is availabe now on Steam Early Access.