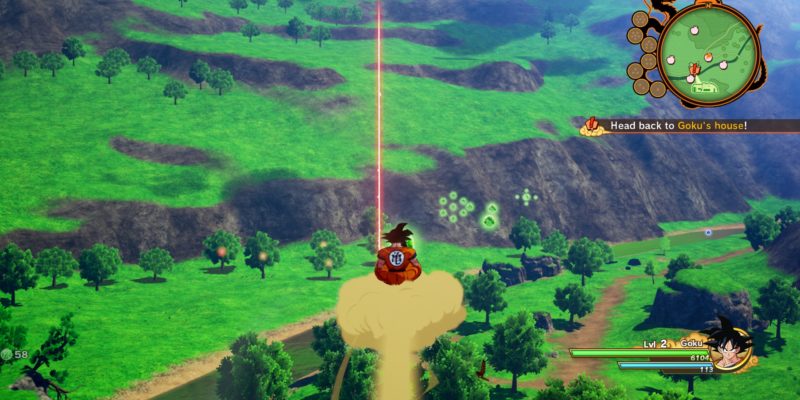 So, finally got your mitts on Dragon Ball Z: Kakarot and want a bit of an inside line on what it has to offer? Then check these tips out! They’ll take from a mere Kaioken x 10 to Super Saiyan 3 in no time.

Making cash in the game doesn’t seem very simple at first. Quests don’t reward you with money, and most items don’t sell for much. However, it’s really no biggie to make more than you’ll likely ever need. You just need to keep your eyes peeled for dinosaurs and go fishing if you’re running low.

You can find dinosaurs marked on the map. Head towards the icon and you’ll see one of the buggers stomping around. Keep in mind, they can’t hurt you. Even if they knock you back, you take no damage whatsoever. The only way to do any damage in exploration mode is to use energy blasts, so just hit the dino with them and it’ll go down in no time. 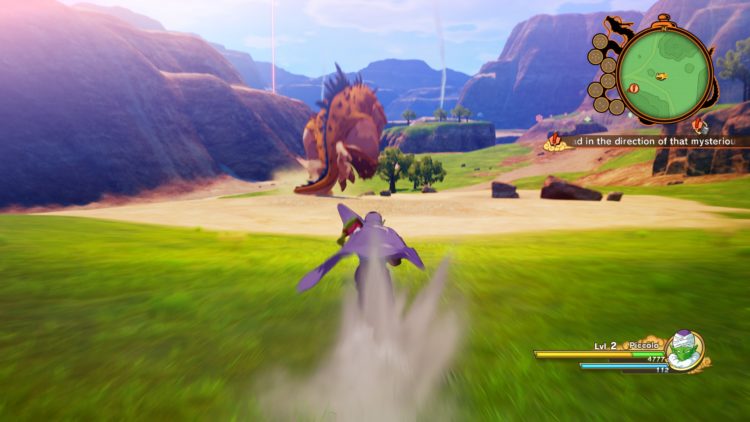 Then there are the flying dinosaurs. When you see them, you just need to hit them with a single energy blast to make them drop some stuff immediately. Selling what they drop will net you some serious cash quickly. If you’re bored on Namek, you can also just catch fish there, as some of their drops are very valuable as well.

Check in with Roshi

Master Roshi can always be found at his home in the islands. While it’s easy to not notice, Dragon Ball Z: Kakarot has tons of generic benchmark quests that you’ll complete regularly. The game tells you on the right side of the screen when this happens, but you can be forgiven for not seeing them in time.

Every time you complete one of these quests, go talk to Roshi and he’ll give you some items, medals, and the like. It’s worth picking these up, especially if you’re not in the habit of grabbing healing drinks, which may come in handy in a pinch. 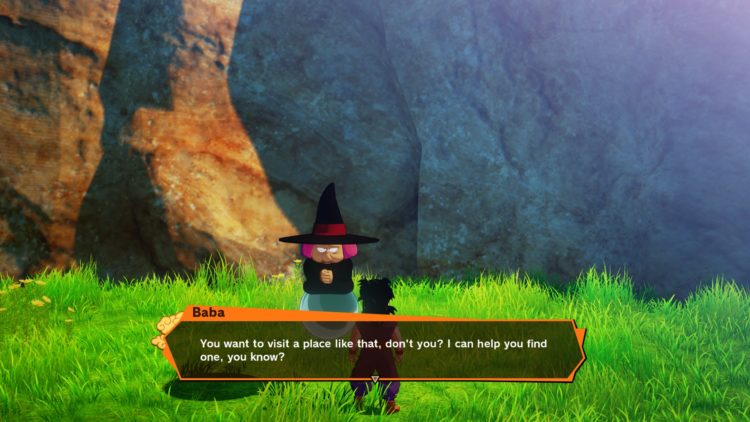 Look at the story tab for side quests

There are a lot of sidequests in Dragon Ball Z: Kakarot, but if one is available that’s not on your current map, then the game won’t directly tell you. You’ll often be able to look at the world map, and doing so will show you if there are any quests available. But if you look at the story menu, it’ll show you if there are any extra quests that you’ve overlooked. Just remember to check here from time to time so that you don’t miss any, as you’ll likely want to collect all the soul emblems.

Talk to Baba to find mementos

You’re sure to stumble on mementos while wandering around. These show a picture from the first Dragon Ball TV series with some descriptive text. But they don’t show up on the map, and you might miss some. Never fear, though. Master Roshi’s fortune-telling sister, Baba, can be found in the maps. Talk to her, and she’ll track down a memento for you – for a fee, of course. You’ll see her text bubble pop up when you’re near her position, so just swing by and you’ll be good to go.

Keep your energy up

You never have to worry about completely running out of ki, as you’re always moments away from getting it back. But getting low on it at the wrong time can be a pain. Because of this, it’s better to pay attention to the blue ki bar at the bottom of the screen. Ki gets depleted by 3 while flying and, if you run out, you’ll come to a complete halt until it regenerates. 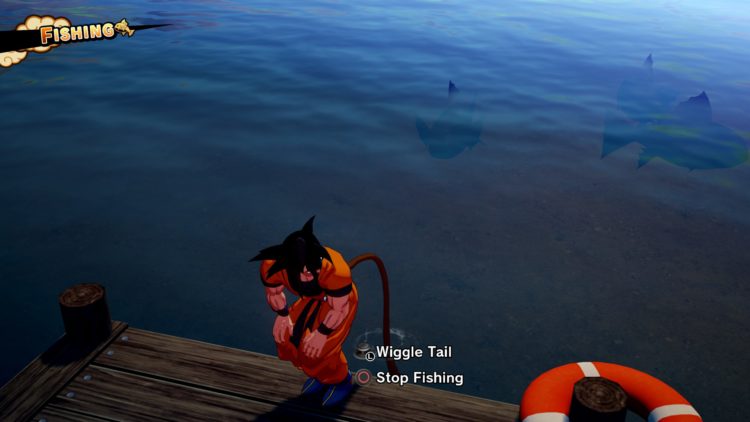 But if you run out during a fight, it doesn’t just fill back up after a second. You’ll need to manually charge it up to get it full again. You’re going to be using a lot of super moves, and while those don’t use much energy, they can deplete your bar all the same. The useful move that allows you to teleport behind an enemy and counterattack also uses up about half of your ki, so you’ll need to refill your bar after each use.

Recharging is especially important once you gain access to Super Saiyan transformations. While one of these is active, your ki will constantly tick down. Once it runs out, the transformation will stop. Therefore, it’s better to top it up for a second or two when you can instead of letting it drop to zero, lest you need to go Super Saiyan all over again.

The non-player characters in Dragon Ball Z: Kakarot don’t often have much to say, but they do frequently give you items just for talking to them. When you happen to come across one, make sure to say hi now and again, as you can amass a good amount of items just by doing this. They can also have some funny things to say at times too. Plus, why wouldn’t you want to see what shenanigans Pilaf is up to? 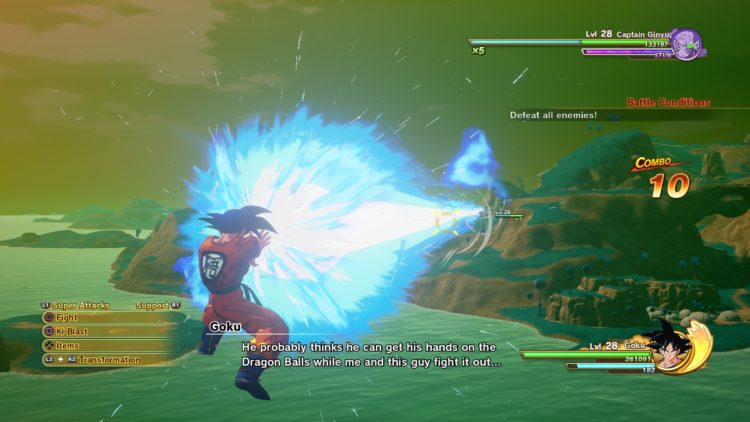 Don’t worry about minerals and parts

You’ll see breakable ore and find parts all over in the game. You can’t do anything with these until about halfway through, though, and even then, they’re not important. I had accrued a fair amount of both by the time Bulma finally offered to build machines for me. But, truthfully, it just doesn’t matter much.

These items are simply used to build and enhance machines, such as the car you’ll need to do the time trials. But I’m not sure who plays a game like this to do time trials in vehicles. Sure, they’ll give you a few extra medals and some items, but I suspect completionists will be the ones most interested in bothering with these. Why drive when you can fly much faster, am I right?

You’ll notice the NPCs will have speech bubbles show up from a ways off, just like I mentioned Baba doing earlier. These speech bubbles are mostly good for two things: finding rarer items and getting recipes. If an NPC’s bubble says something along the lines of, “Is this where you find useless garbage B?”, you can bet some useless garbage is going to be nearby. 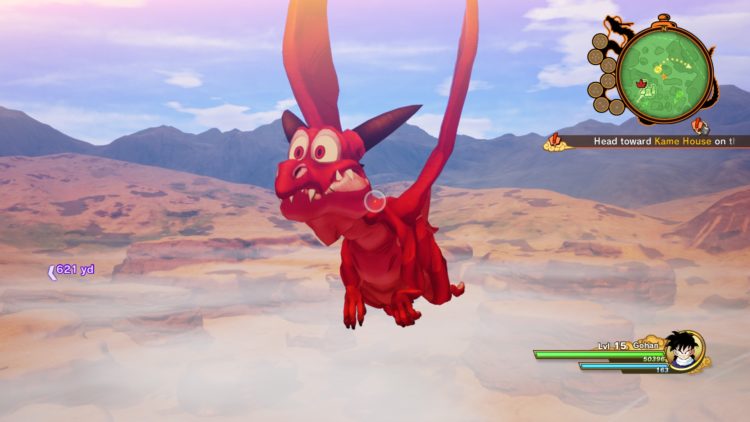 And if a speech bubble mentions a recipe, then talking to them will just straight up give you a new recipe. Much like the building aspect, recipes will only be of interest to specific people and don’t need to be utilized to see your way through the game. It’s not exactly difficult, but they’re there if you want ’em.

You’ll see plenty of orbs arranged in circles in your travels, that’s for sure. But flying at breakneck speeds through these never seems to collect them all. That’s because you need to twirl to do so. How do you twirl? Simply hit the triangle or Y button if you’re on a gamepad and your character will do a little spin. Doing this while you pass through an orb circle will collect the entire thing.

One of the more valuable things you’ll come across in Dragon Ball Z: Kakarot is the rainbow orbs, which you’ll need to upgrade your special moves. One of the best ways to get a few more of these is to touch the white orbs you see occasionally. When you touch one, time will slow down for a bit and then a trail of orbs will appear. Follow these orbs to find a few rainbow orbs on the way. 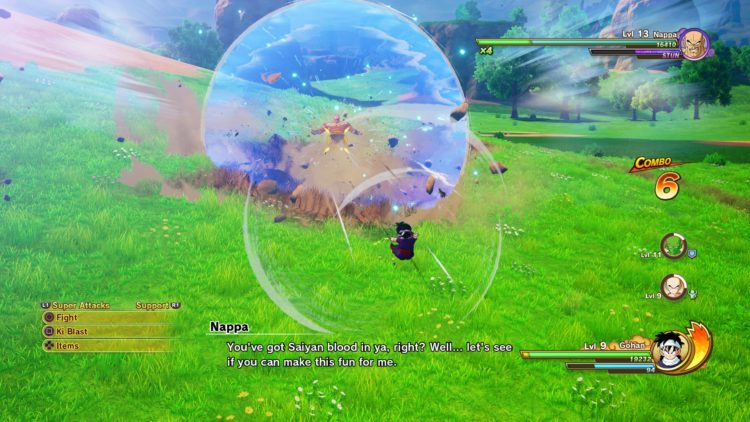 Don’t bother spending a ton of time grabbing regular ones, though

There are orbs nearly everywhere in Dragon Ball Z: Kakarot. It’d be one thing if they didn’t respawn, but they do. While leveling moves can eat through them, the game gives you plenty as a reward simply by doing missions and the like. There’s no reason to go out of your way to collect these. If you’re a big fan of grabbing all the things, it’ll be better to hold back.

You don’t need to fight the random enemies

There are enemies just floating around all over the place. It can be tempting to get into scrapes with them, but if they’re of a lower level than you (and they usually will be), you can reap the rewards without laying a finger on them. All you need to do is simply crash into them while boosting and you’ll kill them in one hit. And all of the orbs and experience you would have gotten for taking the time to fight them will be yours regardless.

Start every fight with a special

Every time a fight begins, your enemy will have their guard down. Thus, if you launch a special attack, they’ll take the brunt of it without dodging or blocking. This works best with projectile attacks and is a great way to dish out a fair bit of damage immediately. 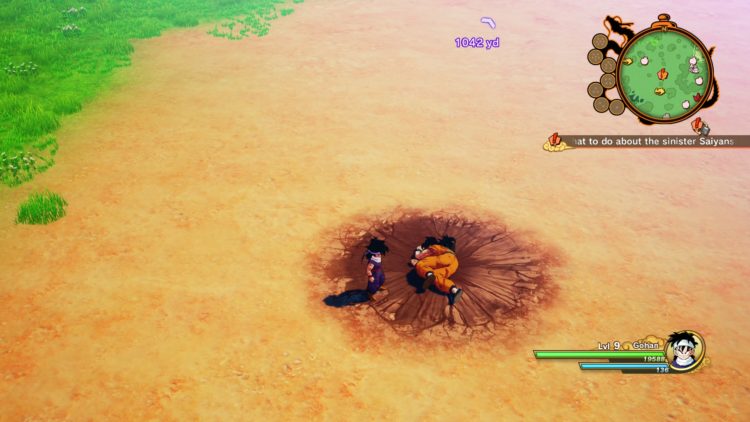 I know the title says “quick tips”, so you probably weren’t expecting that many. But they’re there anyway. Dragon Ball Z: Kakarot is a big game with a lot of things in it, so keep what you’ve learned here in mind and you won’t find much to be surprised by. As always, if you have any more tips of your own, feel free to leave them in the comments.

Dragon Ball Z: Kakarot is available now over on Steam.

Baldur’s Gate 3 has “something brewing” for next month