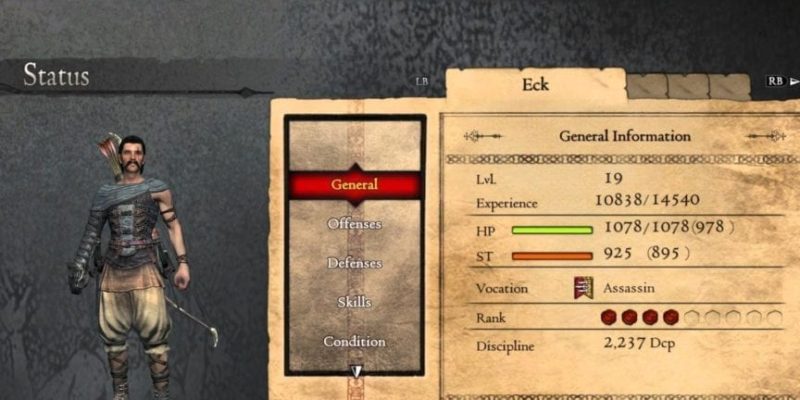 If you deal in console gaming, particularly in the last generation, then you’ve most likely heard of Dragon’s Dogma. The action-RPG released on Xbox 360 and PlayStation 3. However, the original Dragon’s Dogma (and the enhanced Dark Arisen version) didn’t initially see the light of PC. The 2012 release of the game saw mostly positive reviews, scoring a “78/100” and “75/100” by Metacritic on PlayStation 3 and Xbox 360, respectively. So this begs the question: Did the three year delay create a worthy PC game? Assuredly, Dragon’s Dogma seems to be most at home with a keyboard and mouse.

Like many fantasy RPGs, you are given a god complex, being distinctively set aside from everyone and thus met with a load of enthusiasm upon meeting new NPCs . This comes in the form of being “Arisen” (hence the title) where, at the beginning of the game when faced with a dragon opponent, have your heart ripped out and are now destined to find the dragon and recover your heart. Thankfully, the story progresses beyond this cliche into something actually hold depth. While the lore wouldn’t even glance upon the face of J.R.R. Tolkien, there is certainly a rich world to be uncovered here, and the extended DLC that is included with Dark Arisen builds on this world furthermore. Without spoiling too much, you are responsible for a number of “Pawns” or NPCs that follow and aid you in combat, leveling up individually of your character. Going beyond the standard party system of most RPGs, these NPCs actually play a critical role in the story and bring life to a world that seems so distant.

The moment I jumped into Dragon’s Dogma: Dark Arisen, I knew it would be a completely streamlined and beautiful game. Not a single moment feels like a hitch while wondering through the massive, open world. Combat transitions beautifully into exploration, and vice-versa. There is a sense of complete freedom when leaving a trailer in order to experience the open game world. Very few titles rival this feeling, and the only game I can give proper comparison to is the open-sandbox style of the Far Cry franchise.

To tie exploration and fighting together, the overall feeling is completely seamless. I chose the Strider Vocation (more on that later) upon creating my character (a dagger and bow wielding machine), and jumped back and forth between firing a couple of arrows into my foes and then chopping them down with daggers, These daggers were flared often times with the fire of Hades behind them. Being able to be open with combat makes you feel like a true badass, especially when you have your pawns behind you that actually aid the fight against any enemy. Having full fledged NPCs to follow you around really makes the game feel complete. I remember facing off against massive foes, with the only saving grace being my pawns behind me.

The Vocations in Dragon’s Dogma can be most easily defined as character classes. However, while most RPGs hand you a handful of classes to start with, Dragon’s Dogma only gives you a choice between three at inception. There is a Fight, Strider and Mage classes available for selection. These can then be further trailed to advanced vocations which give you even more abilities in your particular class, or combined with another vocation to yield a hybrid vocation. I love this modular approach to the class system because I always seem to want to change my class midway through any RPG. Even more awesome, is that your pawns each have their own vocations which can be changed and upgraded throughout the game just like your own.

The reason the pawns work so well by having vocations is because you can summon and banish different pawns throughout the game. Your main pawn cannot be dismissed permanently, but all the rest of the pawns can be called upon at any time through stones found in the world that grant passed to The Rift, a purgatory like place where your pawns live. That means that if you’re facing a ton of goblins at once, that you can grab some pawns that are skilled with agro style combat, whereas when you’re fighting a huge beast, you can choose a mage to have your back. Again, the modular approach works beautifully in this case.

For a game that came out in 2012 and had a facelift in 2013, Dragon’s Dogma surely doesn’t show it’s age. This is the case, particularly considering that the game came from last generation consoles. The graphical fidelity really flourishes on a PC platform, with frame rates unlocked and graphics settings being tailored from the ground up. There was never a noticeable dips in framerate despite the open world, and the textures are pleasant enough to rival many AAA titles out now. All is not perfect in the graphical world of Dragon’s Dogma, though.

I play on an ultrawide 21:9 monitor (as opposed to the standard 16:9) and I know plenty of fellow PC gamers that do as well. Despite the settings that claimed the game was running in 2560×1080, half the HUD was cut off and there was plenty of stretching taking place. To add insult to injury, the game suffered a horrible doubling effect that really only allowed the character to be seen in focus. Chances are a third party workaround is already being developed, but it seems Capcom missed the boat when so many current titles are beginning to support 21:9 aspect ratios. Check the video below to see the stretching effect in progress.

Thankfully, I ran the game in 1080p and suffered no issues when downscaled to a 16:9 resolution. After this was in place, I was able to experience an absolutely amazing title. The combat, story, and world flow seamlessly into each to rack up an experience that feels like it was tailored for PC. In fact, it blows my mind that it has taken Capcom this long to release Dragon’s Dogma on PC because it genuinely seems like the most optimum way to experience the title.

While Capcom has achieved many success with this title, they have also achieved failures, the most offensive being the lack of 21:9 support. What is so frustrating about the lack of support is that it’s not immediately noticeable to an untrained eye (in this case, me). I played for about an hour not knowing that there was a HUD completely missing from the screen and that ghosting wasn’t just some horrible bloom effect that had somehow gotten switch on in game. This all stems from seeing in the options menu that my game was running in 2560×1080, and all Capcom would have needed to do is run a notice that the game does not natively support 21:9 resolutions and ask if you would like to change your settings. A game shouldn’t make the player scour forums to find solutions to problems that shouldn’t exist.

Regardless of the faults present, Dragon’s Dogma: Dark Arisen is truly a game that deserves to be experienced on PC, and thankfully Capcom has allowed us to do that. Everything in the game blends together for a game that is allowed to stand up with RPG staples on PC, and considering it is only $29.99 for the base game plus every pre-order bonus, DLC, and piece of exclusive content, well worth the investment at full price.

By Tim McDonald47 mins ago
Reviews