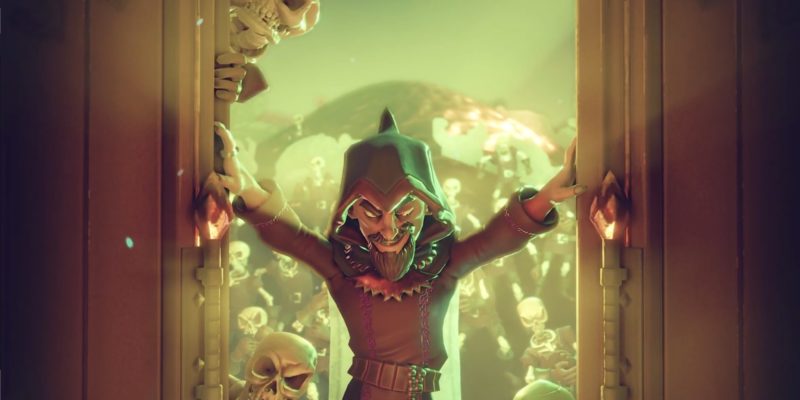 After playing The Dungeon of Naheulbeuk: The Amulet of Chaos for roughly 18 hours or so, you’ll likely reach the game’s last chapter. Therein, you’ll encounter the game’s final boss. Here’s our guide to help you out.

Note: For more information, check out our guides and features hub for The Dungeon of Naheulbeuk: The Amulet of Chaos. Be forewarned that this guide contains spoilers. 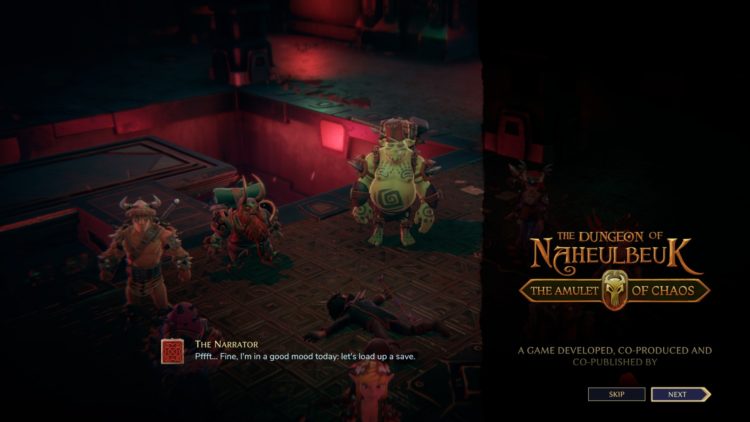 The Dungeon of Naheulbeuk: Reaching the last chapter and the final boss

The image you see above is actually from The Dungeon of Naheulbeuk‘s “joke ending.” Once you reach the zone with the Dwarf Anvil, you’re presented with a choice to destroy the Amulet of Chaos or do nothing. If you pick the latter, you’ll get that short conversation. It’s not really an actual ending since the game immediately presents you with the same choice as before.

Anyway, after destroying the item, you’re tasked with finding Mel Boots’ whereabouts. Be sure to save once you’re told to go to the cellar. As mentioned in our official review, there’s actually a bug here that prevented me from progressing further since I couldn’t interact with anything in one of the rooms. If everything goes well for you, then you should see a pentagram on the floor. 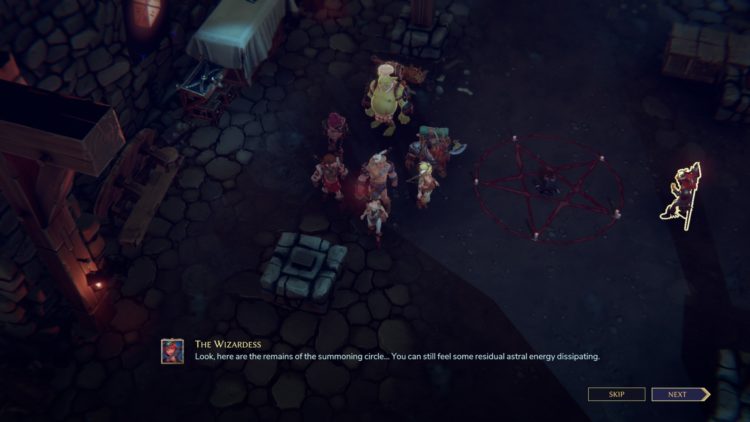 You’ll then partake in several battles — some involve cultists and dark knights, and others involve crazed chickens (I kid you not). Eventually, you’re nudged to go back to the first floor. Head to the magically sealed doorway and you’ll spot a stairwell that leads to Zangdar’s lair.

Zangdar is a powerful sorcerer, and he’s The Dungeon of Naheulbeuk‘s final boss. Before you battle him, however, there’s a few stuff that you need to do. 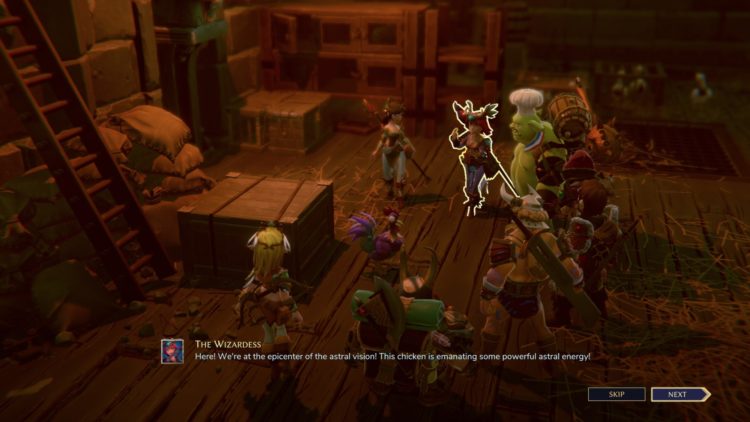 One of the rooms has this riddle:

I can be longer than a dozen men, but it only takes one to lift me. And yet, twenty men could not point me towards the sky. Who am I?

The answer is a “rope.” You can click on that in your inventory to “gift” it to the doorway. 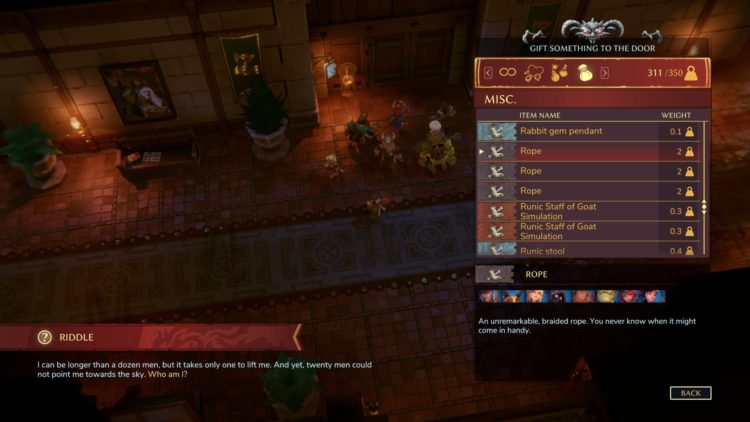 Past the doorway, you’ll find a garden with several statues arranged in a peculiar pattern. Make a mental note of what you’ve seen. 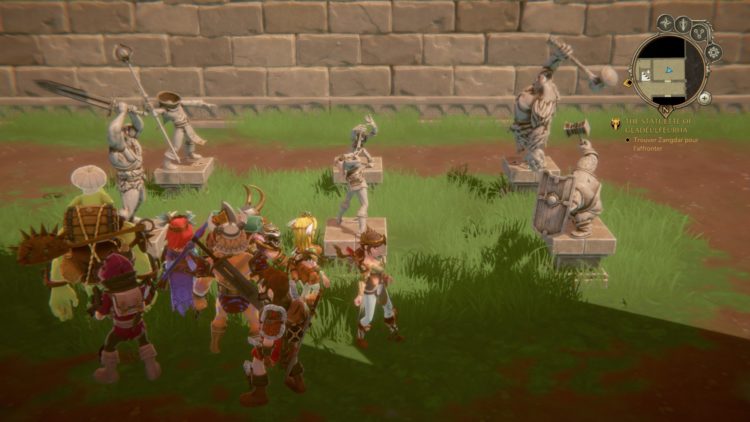 In one of the rooms to the south, you’ll find Zangdar’s laboratory. Arrange the pedestals in a similar manner to what you saw in the garden:

This will unlock the next room where you can pick up Zandar’s Key. It’ll open the door to his lair. 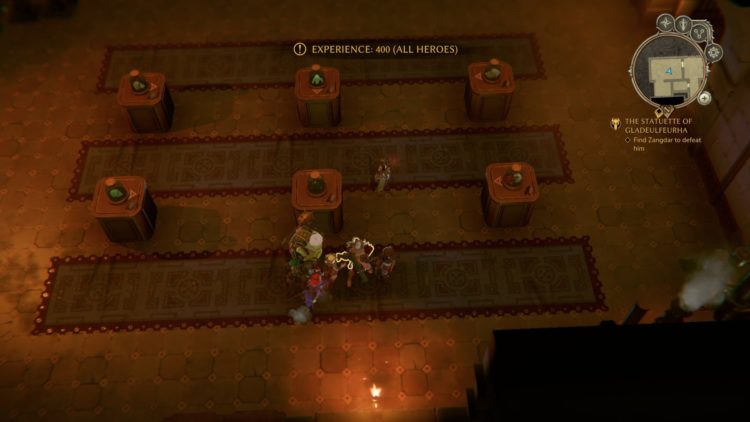 Anyway, there are still a couple of other encounters on this floor. One involves some possessed books and the other has several crazed prisoners.

As far as I know, these aren’t required to reach Zangdar’s chambers. Let’s go ahead and make our way there (the room is marked by a golden circle on your minimap). 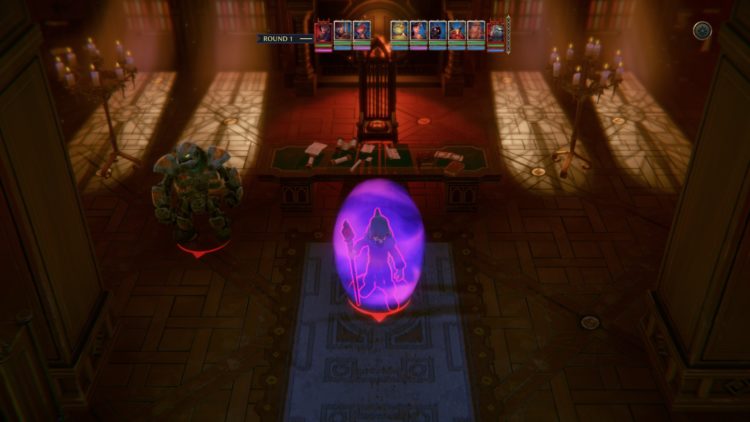 The Zangdar boss fight is unlike anything you’ve experienced before in The Dungeon of Naheulbeuk. This is due to an additional mechanic that comes into play: Zangdar’s shield. You can see the mechanics in the image below: 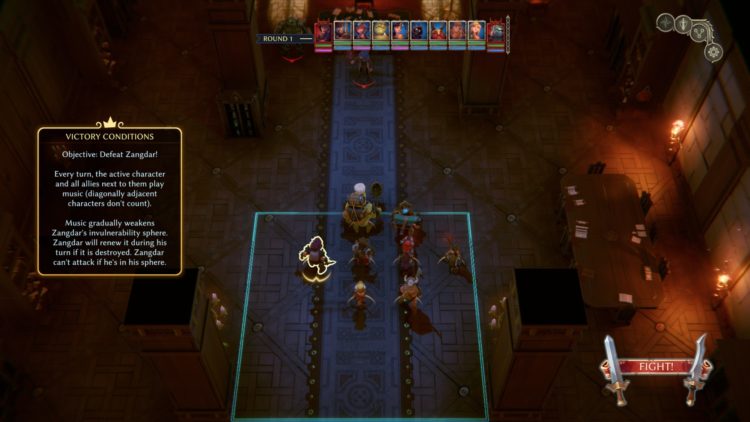 Basically, Zangdar is invulnerable while his shield is active. When your characters take their turns, though, they’ll “play music” and deal damage to the bubble itself.

The “musical damage” a character deals is dependent on the number of allies that are adjacent in front, behind, and beside them (those that are diagonally adjacent don’t count). As such, the goal is to ensure that the characters with the highest Courage (initiative) are surrounded by multiple teammates. 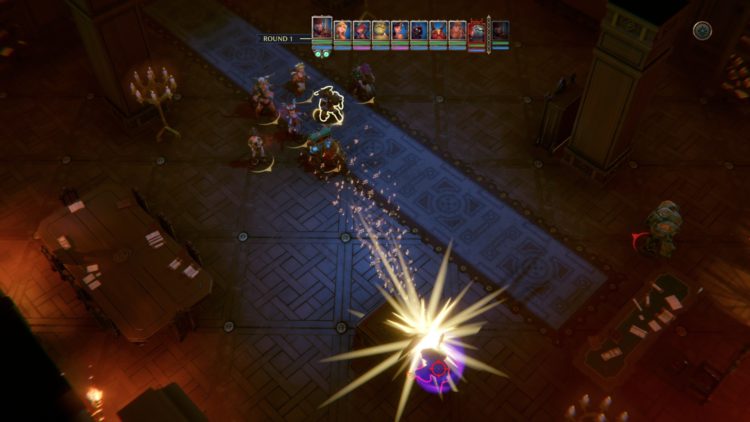 As the fight progresses, try to have characters that aren’t attacking move into positions that’ll be adjacent to someone who takes their turn later. If you can’t blast those notes early, then you might be able to catch up towards the end of your turn order.

It takes roughly 15 “musical shots” to destroy the shield or, uh, burst Zangdar’s bubble. Ideally, the characters that can deal bursts of damage should be going last — i.e., the Barbarian with YAAARGH! and the Thief with Nervous Burst. You should be able to take him out within three or four rounds. 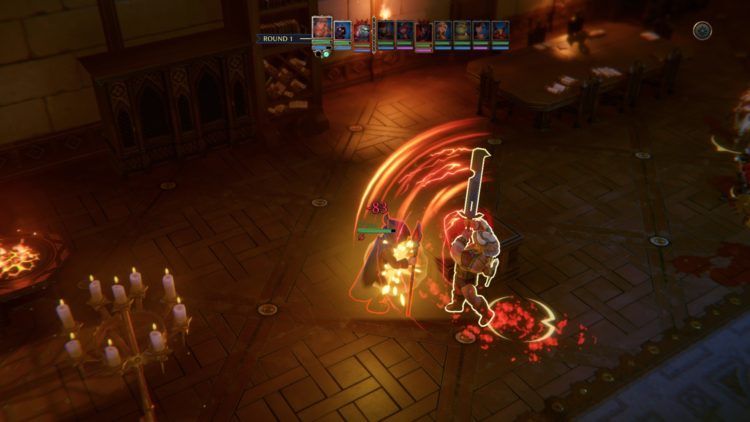 Oh, and before I forget, there are a few more things to consider: 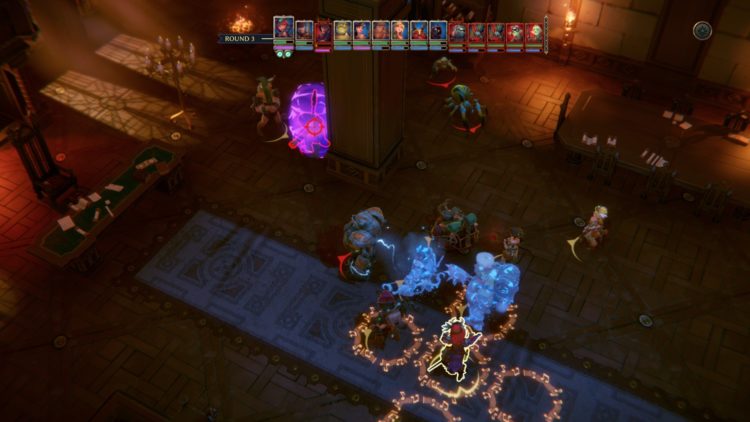 Update: Fixpont from the comments mentions that you could simply delay the turn of your characters. Because they can play their song whenever their turn comes up, delaying effectively lets every character play the shield-breaking song twice each round.

In any case, once Zangdar is dead, you can pick up your loot (just major health potions). That surprised me too since I thought there’d be additional battles ahead.

You’ll get to watch The Dungeon of Naheulbeuk‘s end credits as well. Unfortunately, it looks like there’s no New Game+ mode after defeating the game’s final boss. 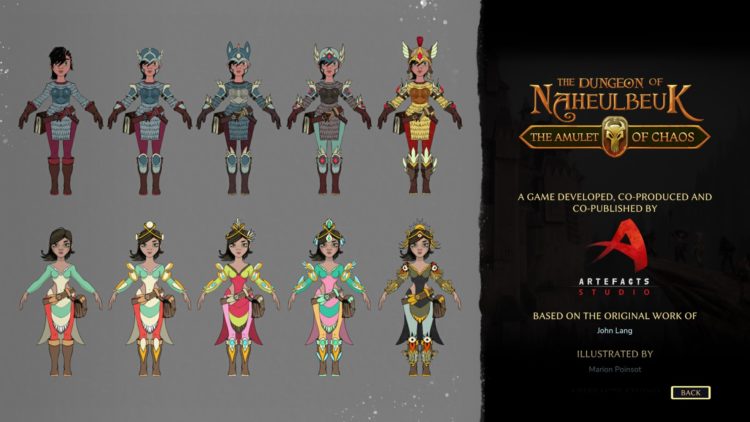