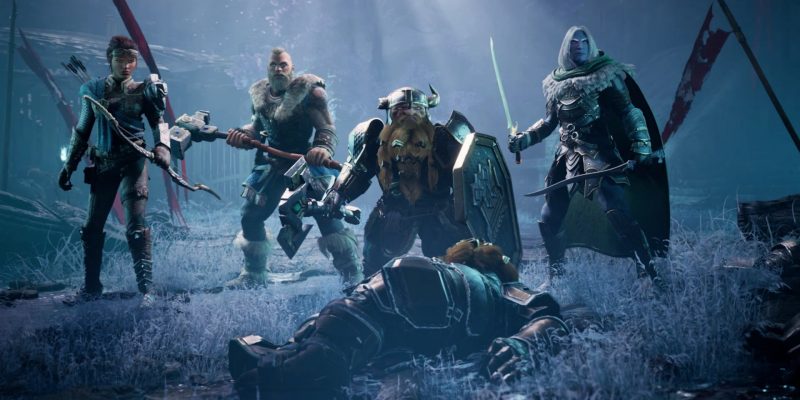 To be upfront here, this game has next to nothing to do with the other Baldur’s Gate game that uses the same subtitle. Putting it bluntly, said subtitle was almost certainly only reused to try and capitalize on nostalgia. Dungeons & Dragons: Dark Alliance is less of an RPG and more like a modern Gauntlet game than anything else. It focuses on action, but said action is quite unimpressive. The textures and lighting are good, and the optimization is surprisingly above board. But everything else here, from the controls to the design, is lackluster, resulting in a game that won’t appeal much to hardcore D&D fans, nor to players looking for satisfying combat.

Dungeons & Dragons: Dark Alliance is set within R.A. Salvatore’s Icewind Dale Trilogy, specifically after the first book, The Crystal Shard. Drizzt Do’Urden and his companions have defeated the tyrant Akar Kessell, who was manipulated by the evil shard, Crenshinibon, into oppressing the land. Now everybody wants the shard, and it’s up to the heroes from the books to make sure that the Dale is safe. You’d think that using Salvatore’s work as a base would be ripe for the game to have a solid story, but it doesn’t even try. There’s barely any plot to speak of.

The four playable characters: drow elf Drizzt Do’Urden, the dwarf Bruenor Battlehammer, and Bruenor’s adopted children Wulfgar and Catti-Brie, have absolutely no story presence. Dungeons & Dragons: Dark Alliance includes cutscenes, but they tend to focus on generic enemies screwing around. The characters occasionally talk to each other during co-op play, but astoundingly little has been done with Salvatore’s framework. I’m not sure why this game was built on his books as a base when there wasn’t any interest in doing anything with his narrative or characters. It’s all a waste.

You start out by picking whichever of the four characters you prefer. Drizzt has the coolest melee attacks, but Catti-Brie is the only ranged character, making her the best choice on account of the melee combat being pretty mundane. The shooting isn’t enjoyable either, but it’s more tolerable. Each character levels up and gets attribute points for raising nearly pointless stats, or feat points for character bonuses. Leveling up grants access to new feats and combat moves. Raising attribute points and equipping new gear raises your gear level, which lets you take on higher difficulties for better rewards.

The textures in Dungeons & Dragons: Dark Alliance are much better than I expected. Levels themselves also look great, but they all feel interchangeable from a design aspect — and they’re inescapably dull. The game is divided into several acts, each with three levels apiece. But while the locations change, they’re all similar in structure: you run to markers to collect or activate a thing, and then follow the next marker to the another thing. You keep going until you get to the level’s “boss,” which is a regular enemy with a larger health bar. One act has the same frost giant as the “boss” of each level, with the final one’s only difference being that he attacks more often.

The levels are so incredibly uninteresting, and I really can’t stress that enough. There are plenty of opportunities to explore off the beaten path, and you’ll find gold and chests along the way. The loot is subpar; you’ll almost always be finding useless crap. Some of the levels will include puzzles, that lead to loot, and statues that grant attribute points. But since the focus of Dungeons & Dragons: Dark Alliance is on four-player co-op, all of this is contrary to the game flow, which will create problems if some players want to explore and others just want to get it over with. 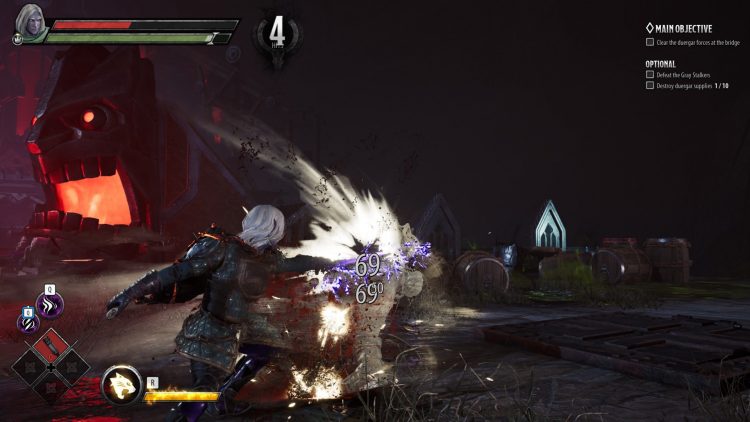 This is complicated by the way the game handles resupplying. After completing certain objectives, a campfire will show up, giving your team a checkpoint that refills your potions. Forgoing the rest offers loot bonuses. But whoever makes the choice first decides for the team. If you’re with random players and want loot, the bonus can get thrown away because someone decides to rest. The entire party then has to wait for the rest period to end. If the whole party wipes, they respawn at a rest point — without one, they respawn at the beginning of the level.

Strangely, if the host dies and no one revives them, respawning will warp the rest of the players along with them. It’s weird. Still, the focus of Dungeons & Dragons: Dark Alliance is on combat, mostly of the close-combat variety as three of the characters are purely melee. The combat is poor, however. It’s endlessly button-mashy and the unlockable moves are often cumbersome to pull off. Hold forward during a light attack, then press back and then forward with a strong attack; it’s almost like a fighting game. But the controls are so unresponsive that it’s often just better to mash on the light or heavy attacks.

The camera doesn’t make combat any better. It’s glued to your character’s back, which makes attacking awkward. Locking onto foes makes things better, but the camera moves in extra close making it hard to see what’s around you. Since you’ll be fighting multiple enemies at once, the feature is more hindering than helpful. Thankfully, the enemy AI is as braindead as it is useless. When you hit smaller enemies, they get stunlocked — you just wail on them until they die. If you’re playing as Catti-Brie, you often won’t even aggro enemies by sniping them. She can clean out entire areas while the enemies just stand there. 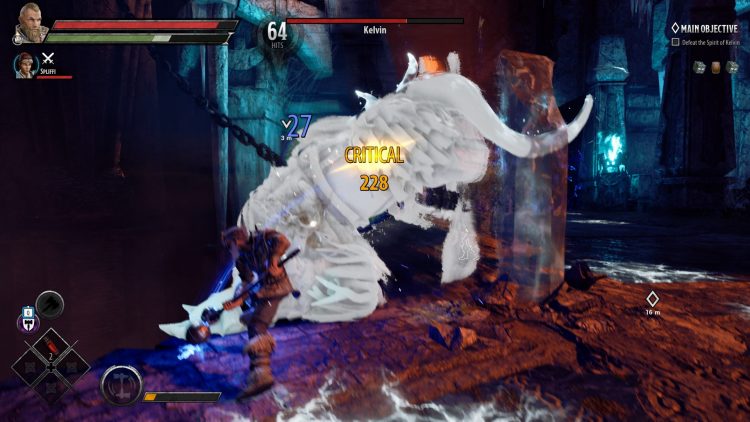 The aggro in Dungeons & Dragons: Dark Alliance is odd in general, though. Enemies often don’t react even if you’re right in front of them, as they’ll just stand around a lot of the time. I’ve slaughtered entire groups of foes without them moving a muscle. Larger enemies pose more of a threat, mostly because the game’s hitboxes are unpredictable and attack animations are janky. There’s a dearth of enemy types, and it won’t take more than a few hours before you’ve seen nearly everything the game has to offer. The entire experience is predicated on fighting the same few enemies in boring locations.

This is one of the clunkiest action games I can recall playing in recent memory. You can block, parry, and dodge, but there’s no canceling your attack animations. Each character has a couple of skills, plus an ultimate, but they vary in effectiveness. Their cooldowns are also too long. I wish Dungeons & Dragons: Dark Alliance had skills like an ARPG, but you’ll mostly just be button mashing. Things are better when playing with others, but the combat was never remotely enjoyable to me. Playing solo is also mostly awful, so I strongly suggest you go with a group.

To make matters worse, Dungeons & Dragons: Dark Alliance has a ton of technical issues. When playing co-op, one of my partners wasn’t able to pick anything up. Another time, a different partner’s skills weren’t working correctly. I tried to co-op the game with another writer, but you have to use Steam invites to play with friends, and they simply wouldn’t work with him. One time I connected with another partner, only for him to get frozen in place and vanish. He tried to restart, but the menu took forever to come up. 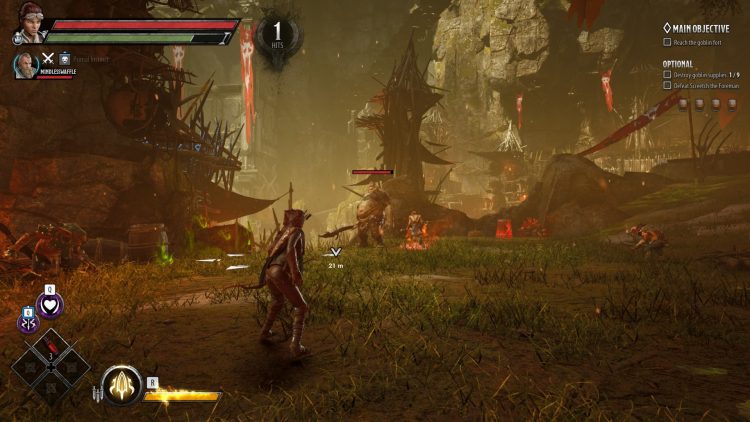 Sometimes, levels become impossible to complete, too. I killed the “boss” of one level, and the end screen failed to trigger. So, I had to return to camp and lose everything I’d gained — you can’t equip loot during a mission. During the boss fight of the very next level, he stopped moving halfway through. I figured that the game was as broken as ever, but at least I could still hurt him. But after emptying his health bar he wouldn’t die. Once again, I had to exit out and lose all my progress. Overall, Dungeons & Dragons: Dark Alliance is wonky and undercooked, feeling closer to an Early Access game most of the time.

Dungeons & Dragons: Dark Alliance is a hopelessly dull, generic experience that fails as an action game and is as half-baked as it is disinteresting. Fans of the source material will find little to love, and people attracted by the D&D license will find next to nothing resembling what that offers here. This is a deeply repetitive, clunky game featuring a lot of ideas that fall flat. It may be pretty, but don’t let that fool you into thinking that there’s anything of value to find. 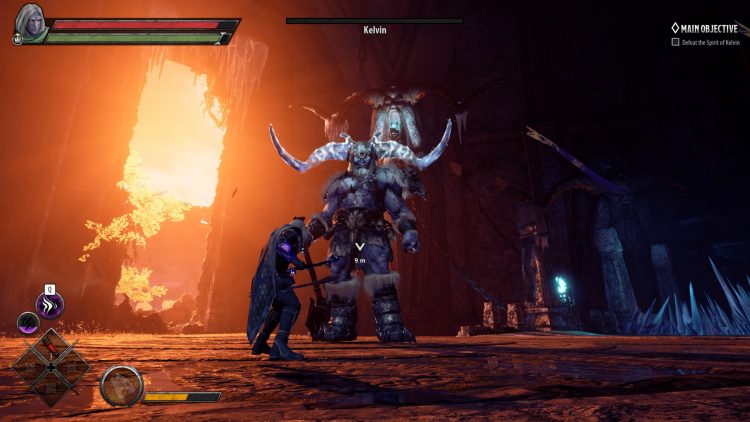 Dull and clunky, this is one hell of a weak, uninspired action game that's plagued with poor design choices and technical issues.

By Blake Grundman23 hours ago
Reviews