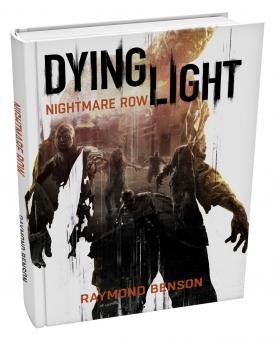 No, the Dying Light tie-in novel is not being written by Ian Fleming from beyond the grave, although that would be fitting. And morbid.

Instead, the novel – titled Dying Light: Nightmare Row – is being penned by Raymond Benson, the chap who wrote various James Bond short stories, movie novelisations, and new novels between 1997 and 2003. He’s not entirely new to the world of writing video game novels, either, having also written a pair of Splinter Cell novels, the novelisations for the first two Metal Gear Solid games, and a novel each for Hitman and Homefront. According to Wikipedia, anyway.

Dying Light: Nightmare Row follows Mel Wyatt, an 18-year old American athlete competing in the games that preceded the zombie outbreak. She’s left stranded in the city along with her younger brother, and… well, things escalate from there.

Dying Light itself, on the other hand, is a first-person open-world parkour-infused zombie-basher. You can watch me playing it really badly over here.

No word on when Dying Light: Nightmare Row is due out, or how much it’ll cost, but Dying Light is due out on 27 January.