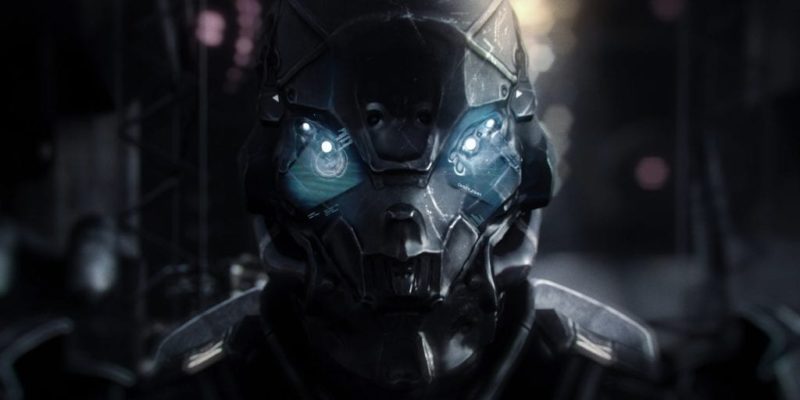 Today at E3, we got our grubby little mitts on a shiny copy of Hollowpoint, a new 2.5D action game from Ruffian Games, to be published by Paradox Interactive. The game sees players take on the role of a hollowpoint, a technologically advanced soldier in a war between corporations. The 2.5 dimensional gameplay means that players can only move in a two dimensional side-scrolling plane, but they can shoot into the background in addition to shooting side to side and above and below them. Enemies, however, can move in three dimensions and often come at the players from entrances in the background.

The game allows up to four players to play cooperatively over the internet to complete varied mission objectives in procedurally generated levels. Hollowpoints gain levels and ability points, which can be used to increase the power of the hollowpoints’ abilities. Hollowpoints can also be augmented, allowing significant improvements or alterations to certain abilities.

The game features a wide variety of weapons, from shotguns to machine guns to rifles, each of which can be separately leveled-up as well. Leveling up a weapon also provides an ability point that can be used to increase that weapon’s power and capabilities. Multiple attachments can also appear on weapons, and finding the perfect gear combinations is a significant part of the late-game draw of Hollowpoint.

In our hands-on impression, my colleague and I played a single level cooperatively in which we had to rescue prisoners. The level was randomly generated from existing asset sets, and featured multiple side-objectives in addition to main quest, such as defending a turret or defeating a certain group of enemies.

Combat is fast-paced and enemies can quickly overwhelm you if you let them flank you. Good use of your abilities, such as force fields and invisibility is key to survival. Using the mouse to target enemies feels natural and the multi-dimensional gunplay felt like second nature after only a few minutes.

Levels are relatively short, taking between about five and twenty minutes, depending on its size and the skill of the players. While we played an early level, our inability to properly use the hollowpoints’ powerful abilities meant that it took a fair amount of time to complete. However, the learning curve is fairly smooth, and as we began to understand the flow of combat, things became simpler very quickly. I have no doubt that playing it again, everything would be much more fluid.

We didn’t get much of a taste of the complex RPG elements, such as leveling up hollowpoints and weapons, in our brief session. However, we did see that a lot of work has clearly been put into each weapon and skill, giving each a unique and satisfying feel.

The replayability of the game appears to stem from the procedurally generated nature of the levels, which gives hundreds to thousands of potential options for players to play through in order to level up their hollowpoints and acquire gold to purchase new item packs.

While the gameplay was enjoyable for the twenty or so minutes we tried Hollowpoint, it remains to be seen whether it will remain enjoyable after hours of play, especially in single player. But so far, the game appears to rest on solid foundations, and undoubtedly the cooperative play will ensure that its an enjoyable diversion to play with friends at least for a little while.

You can check out the most recent trailer below:

Dota 2 Reborn beta is out now