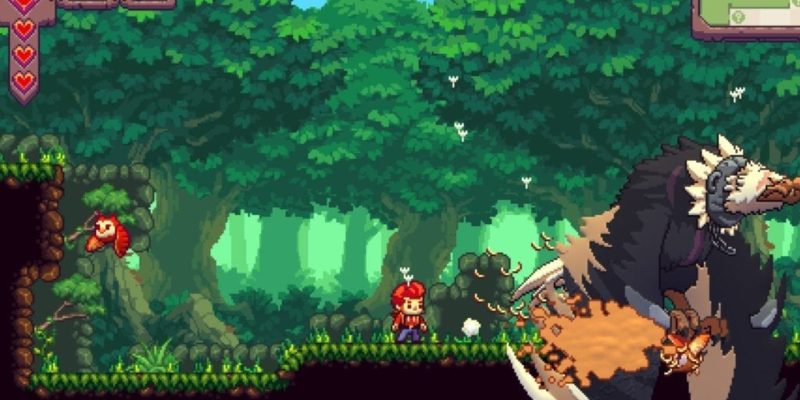 It’s very difficult to make a game that stands out in the action-platformer genre. A few here and there leave an impression, but, more often than not, it’s saturated with also-rans. Eagle Island tries really hard to separate itself from the pack and does an admirable job. However, some missteps along the way end up making it a harder pill to swallow.

Eagle Island begins with its hero, Quill, sailing with his owls, Koji and Ichiro. They’re immediately beset upon by a ferocious storm that wrecks them on the coast of the titular island. Shortly thereafter, a giant eagle appears and abducts one of Quill’s owls. While surveying the island, Quill runs into an ornithologist that happens to be studying it and he receives a falconry glove. He then sets off on an adventure to free his owl from the clutches of the great eagle.

The game isn’t exactly story-heavy, though. There isn’t much dialogue, and the story sequences don’t typically last long. That said, though, Eagle Island has a really enjoyable, satisfying narrative for what it is. It isn’t anything greatly complicated, but the story is well-paced and has enough twists and turns in the right places to keep you invested in what’s happening. Some of the storytelling can even be surprisingly powerful, so I’d argue that this is the game’s best feature. 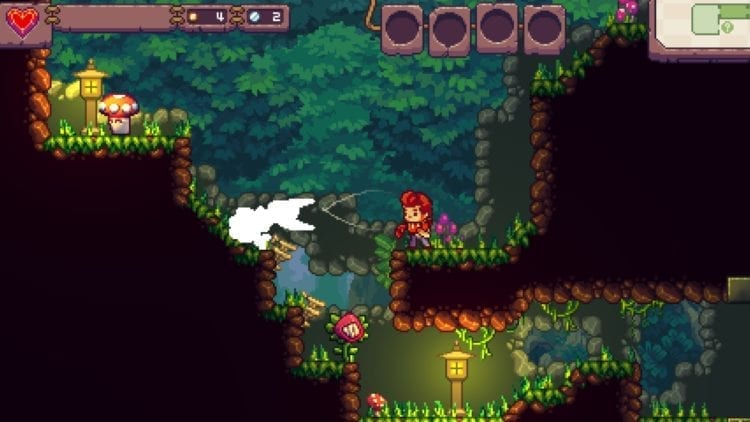 A bird in the hand

Early on, the gameplay in Eagle Island feels really special. Quill uses his falconry glove to attack with his owl in 8 directions. Aiming in midair will allow you to stop completely for a few seconds while doing so, which is a very intuitive way of giving the player some much-needed control. The controls are also very responsive, and I would sometimes even find myself hitting an enemy that was about to collide with me at the last possible moment, provided they were coming at me from the appropriate angle. There’s a great deal of specificity to the combat mechanics and inputs. But that’s sadly not enough to stave off repetition after an hour or two. It can also just be flat-out cumbersome to hit enemies a lot of the time.

Eagle Island‘s general structure combines Metroid and rogue-lite elements. In order to progress through the game, Quill has to venture into levels to either obtain necessary upgrades or move the plot forward. The game has an overworld scattered with doorways leading to the levels. Most later areas are gated by progression abilities, such as being able to double jump or swim.

Once you get into a level, things change in a big way. Each level is procedurally-generated. You’re tasked with defeating enemies to unlock doors or collect keys that allow you to reach the boss room. Once the boss is defeated, the level ends and you can move on. On the default difficulty, Quill can only take three hits without a power-up known as a rune that gives him an extra hit or two. Naturally, if he loses all of his life, you’re kicked back to the beginning, albeit with a newly-generated level structure. Dying also takes all of Quill’s currency. 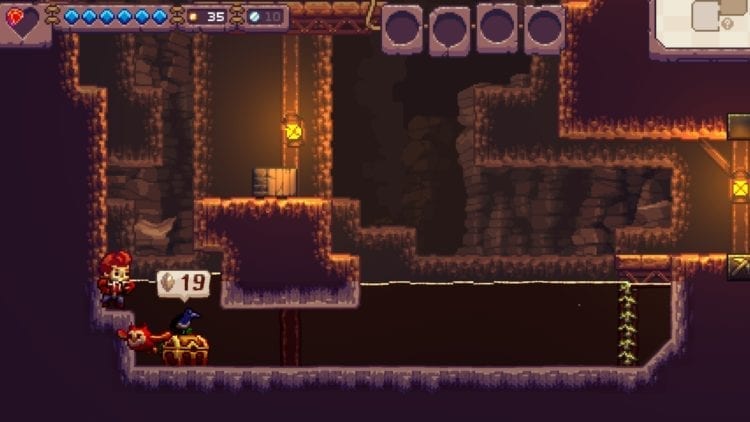 Despite the fact that Eagle Island is built around upgrade progression, you can’t really upgrade Quill. You can’t permanently increase his health or most of his abilities. The only way to strengthen him is to obtain runes. These runes fit into one of four slots and have a myriad of different uses. Many of these give additional benefits for using the elemental owl forms you receive early on. Others change the properties of one of your owl’s moves or allow you to see all the important locations on the map.

The issue is that most of these simply aren’t all that useful. As mentioned before, they also degrade over time. So if you want to go at your own pace, you can end up losing your runes and being stuck with your default character. Defeated enemies drop gold and silver currency that allows you to open rune chests and purchase heart refills and runes from a vendor respectively. You’ll likely really need to buy heart refills, as Eagle Island can be extremely difficult on the default setting.

As I said, Quill can take 3 hits. As you can imagine, 3 hits don’t allow for much leeway. I honestly can’t imagine most medium-level players being able to get through Eagle Island on the default setting. Even there, it’s easy to lose three hearts in the blink of an eye. The levels are almost exclusively based around fighting enemies, and if you’re anything like me, the unpredictable and speedy nature of some of the foes makes it really, really difficult to not get hit. Thankfully, the easier setting doubles the number of hits you can take. 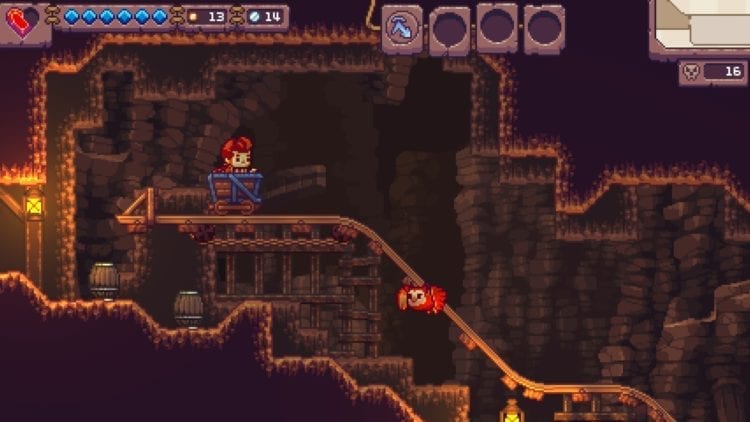 Getting back to the combat, yes, Quill can aim his owl in 8 directions, but some enemies have patterns that don’t sit well with this. I found that I simply couldn’t hit some of these enemies at all in certain circumstances. The elemental fire attack’s area of effect helps with this, but it doesn’t make the encounters any less frustrating. On top of that, there’s a delay if you happen to send your owl out to attack and miss.

Picture it. You can only take three hits. You’re being swarmed with enemies that you can barely hit in the first place. You miss and are then left totally defenseless against the enemy’s attacks until your owl comes back. In these instances, Eagle Island‘s combat can be a truly miserable experience. The combat is really at its best against the game’s bosses. which are well-designed and fun to fight. And they almost never require struggling with the controls.

When up against more manageable foes, the combat really does work well, though. Sending out the owl and chaining attacks is really satisfying when you pull it off. Chaining multiple hits in a row can even net you a heart, although accomplishing this is easier said than done due to how you often won’t find that many enemies clustered together. 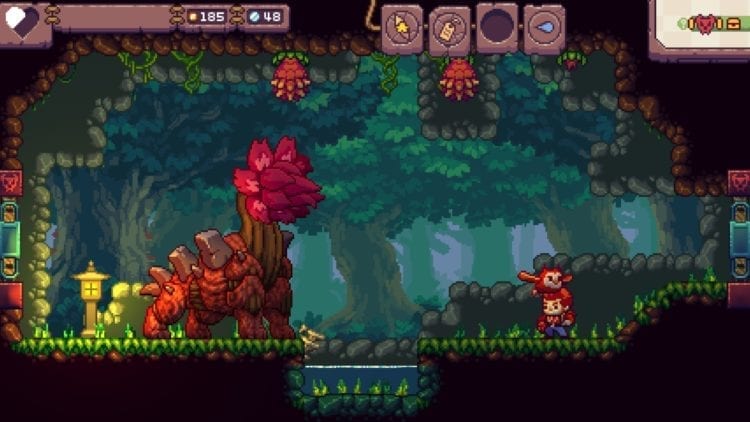 The other issue I had, as I briefly noted earlier, is that the combat gets really repetitive. You just don’t really get anything that changes it up meaningfully. Frankly, I was of bored with it after a while and didn’t really want to keep going. The elemental attacks are a nice touch, but you’re still just launching your owl at things and that’s it. I would have definitely liked if there were some more traditional platforming sections to break up all the endless one-note combat.

After the credits roll, there’s still a lot left to do. There are additional levels to complete, new powerups to collect, and new areas to find. One of Eagle Island‘s main collectibles is ancient coins, of which there are 19. These are mainly collected from challenge rooms denoted by purple doors in the levels. All-in-all, the game has a good amount of content if you don’t get burned out on the combat. There are even different modes of play that cut out the story, with the option to play with set seeds.

Eagle Island‘s visuals are completely 2D and sprite-based. Everything is simple and cute, but it really is a lovely game. The sprites have fluid animations and the areas are colorful and were created with a good eye for detail. The game even has a handful of accessibility options for both visuals and controls, which is a laudable touch that I always love seeing. 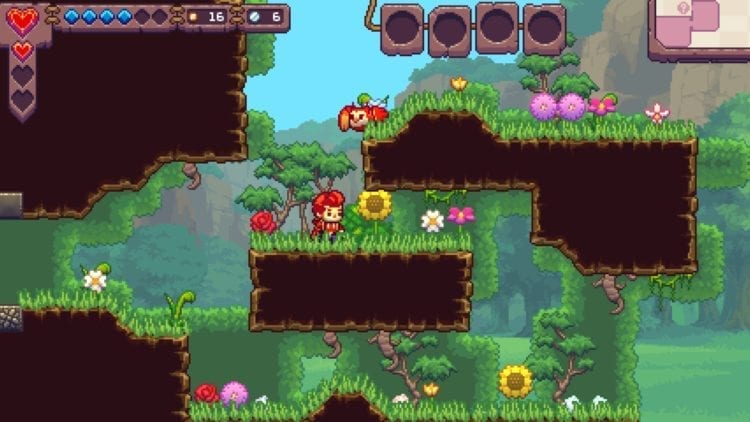 Eagle Island definitely sets itself apart from a lot of similar games due to its design and mechanics. It can be fun, but the combat, while okay, just isn’t enough to really carry this game for me. I’d imagine that anyone who enjoys the fighting more than I did will have a whole lot to sink their teeth into. The story and visuals alone make this game worth a look, but anyone who finds themselves easily frustrated or who doesn’t like punishing games should tread lightly.

With its falconry-inspired gameplay & procedurally generated worlds, Eagle Island is set to a beautifully modernized pixel art aesthetic and provides a breath of fresh air to the character platforming genre. Eagle Island can be played in either Story, Roguelite or Speedrun mode.
6

Eagle Island is vibrant and worth a look for its world and story, but the combat lets the overall experience down.