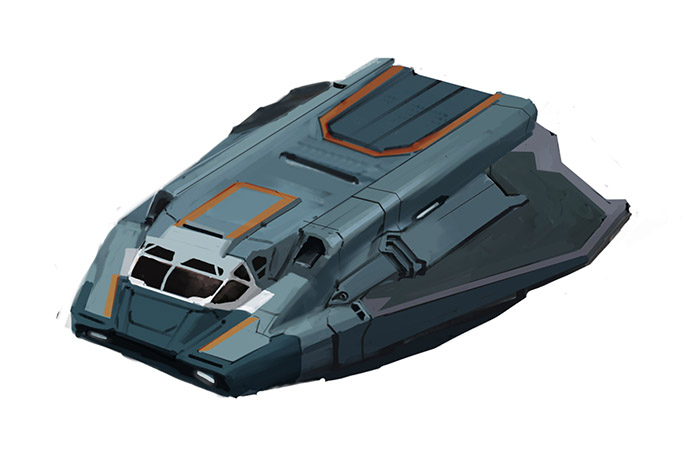 The Adder should look a little something like this.

Elite: Dangerous has skipped right over Gamma 1.6-1.9 and headed straight to Gamma 2.0 for this sizeable update. The new version is available right now (I know this, because I’m looking at it downloading) and provides both the Lakon Type 7 and Adder vessels as playable ships.

The massive changelog notes also highlight Route Planning and the addition of Slavery-based missions (for the immoral role-players among you) as major updates. I’m definitely interested to see how the route planning works, as that’s been pretty regularly requested.

I’d probably be interested in the new ships too, but doubt I can afford them yet.

For an exhaustive run-down of what’s new and different in Elite: Dangerous (including the hilarious “Jettisoning 400 fish no longer spams web requests”,) follow the link above. Here are the headline changes and stability fixes:

– Fixed possible unhandled NULL interfaces if you happen to shut down a ship on the same frame as it fires a drone
– Fix network initialisation bug
– If the player ship is shutting down, don’t bother doing anything in response to its load out being changed
– Fix potential crash highlighted by static analysis in shield emitter modules
– Protect the game from shutting down while the exploration database is ‘dying’
– Fix memory leak on shutdown caused by the stellarforge manager not cleaning up a generation job if one was still active at the time of shutdown
– Fix for assert seen when an AI was trying to send a chat line to a dying ship
– Fix GPU crash on lens flares
– Catch a few more cases where the game can fail to start-up: OS window can’t be created; D3D device can’t be created
– Don’t assert when forced to abandon EnterLocation – can happen legitimately
– Fix crash on GeForce card when starting in bootcamp
– Fix memory leak when texture generation fails
– Fix AI cruise duty assert
– Prevent asserts trying to access systems that don’t exist
– Also allows daughter stars to be queried in constellations, stopping an assert at start-up
– Make asteroids release decals before releasing their physics object
– Fix for occasional startup crashes caused by the Oculus message activities trying to open the dialog box movie when it is not yet loaded
– Fix assert that happens in the larger ring cells
– Moved Beagle 2 landing inside its parent moon’s hillsphere to stop an assert
– Fix the transfer of live ring objects to prevent softlocks
– Fixed Station Services UI locks up if you hammer A button while exiting Galaxy Map while docked