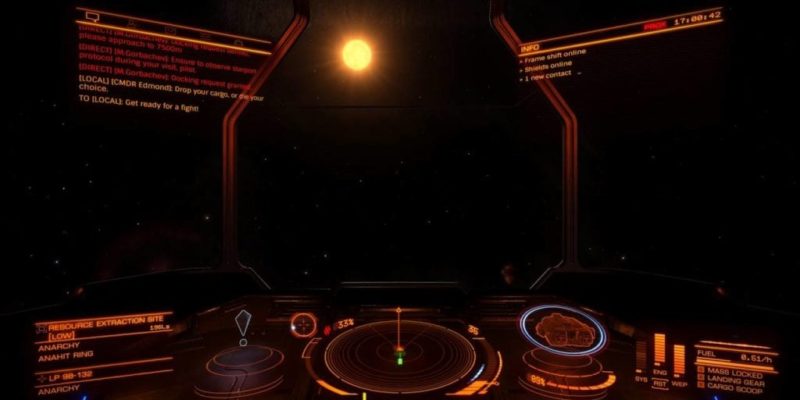 Today’s Elite: Dangerous GamesCom stream contained further information about the NPC crew member mechanics and ship-launched fighters coming in 2.2. For yesterday’s details about 2.2 (‘Guardians’), including the mid-October release window, have a read over here.

It wasn’t quite such an info blow-out today, but still featured some decent details. There are going to be three kinds of ship-launched fighters (SLF) at first, the robust (but slowest) Taipan, the fast, lightly armoured F63, and the most manoeuvrable (but most fragile) Imperial Fighter.

The following ships from Elite: Dangerous are confirmed as able to carry SLF; the Anaconda, Beluga Liner, Federal Corvette, Federal Gunship, Imperial Cutter, Keelback, and Type-9. To carry and deploy them, you’ll need a Fighter Bay (said to be a fairly hefty initial outlay), some fighters, and, ideally, NPC crew members to either fly the fighters or to handle your ship while you fly a fighter. You’ll be able to carry different types of SLF in the same bay.

Up to three NPC crew can be hired from Crew Lounges at ports, and they each have their own combat rank and attendant costs. There’ll be an up front charge for hiring crew, followed by a percentage of any profit (under 1% by the looks of it) as a retainer. Crew can level up through making kills, and have various stances; defensive, aggressive, hold fire, stay put, and (the rather Football Manager-esque) focus.

A new video released today shows the crew hiring process, and the deployment of a fighter in combat. There’s also a second part to yesterday’s David Braben interview. In this one he’s talking about the impact of culture on the game, and some comparisons between Elite: Dangerous’ political structure and Roman senators.