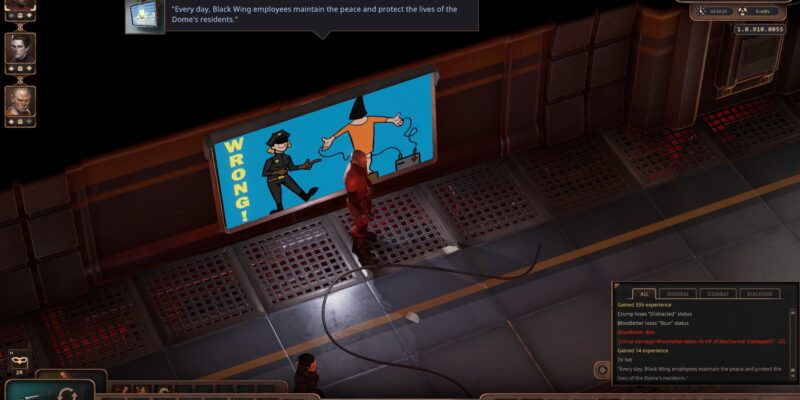 Crowdfunding wasn’t invented for space games that overpromise, underdeliver, and grow a cult around themselves. In fact, it can deliver unto the scene beautiful games that never would have seen the light of day otherwise. For example, here’s a post-apocalyptic sci-fi CRPG like few others, Encased: A Sci-Fi Post-Apocalyptic RPG.

It’s the 1970s, and a huge Dome of unknown providence is discovered in the desert. Covering an area around 100 kilometers from end to end, it’s full of baleful anomalies and alluring artifacts. The Cold War is immediately put on hold as the entire world pools resources to explore the Dome via the newly established CRONUS corporation. You’re one of the few volunteers selected for a one-way trip into this world — the Dome doesn’t let living beings leave — and things go awry soon after your arrival.

If you had enough luck to play Fallout 2, this is very much a modern take on the style but with a wide variety of twists that make Encased very much its own thing. For one, it’s not the world that’s gone to hell — it’s just the Dome. The apocalypse didn’t happen hundreds of years ago. It’s actually still happening. You’re not immersed into a world of 1950s Americana. It’s the 1970s and CRONUS is a multicultural project. The list goes on! 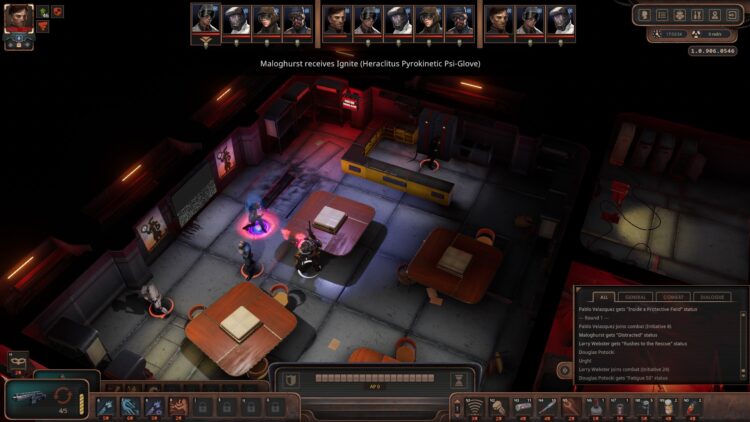 At heart of Encased sits the Encased RPG engine, which would be a terrifying thing to run in a pen-and-paper form. It’s fairly standard, with your character Stats — such as Brain, Brawn, and Charisma — being fairly static and feeding into a variety of derived statistics. Your skills, Combat and Non-combat, will be the main source of improvement. This is especially pertinent as skill tracks are split into 30-point increments, with each new tier unlocking four new active or passive abilities.

So, this isn’t Fallout where pumping Light Weapons merely increases your hit chance. Nay, in Encased you also unlock bullet-delivered debuffs and more powerful attacks. It’s fairly straightforward when it comes to guns, but a lot hides under the Non-combat skills. Want to use grenades and freakier gadgets? You’ll need to boost the Contraptions skill, which will let you utilize stealth field generators, jet packs, and construct Devil Cores (which cause terror rather than terrifying radiation poisoning). Want to become the master of Servoshells? Piloting will make you the most dangerous thing in power armor outside of Space Marines, as well as making you an excellent stunt driver. 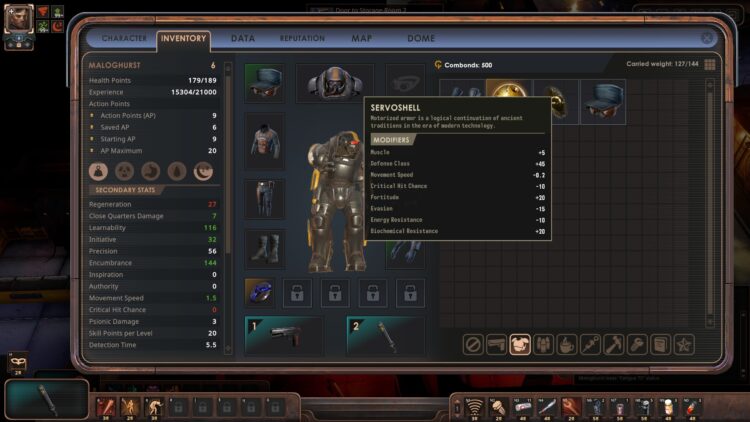 Oh, and there are also Fallout-esque Perks you’ll get every three levels, which can lead your interesting places. For example, having Charisma 6 allows you to boost your fortitude because you’ve spent so much time convincing people that you’re badass that you convinced yourself. Want to make best use of all the drugs available in the game? Well, with Psychonaut your psi-powers will be stronger if you’re as high as a kite, or an Airplane ( that’s what the drug all psykers want to use is called). Together with skills, they allow you to tailor your character as much as you want, including specializing for stealth, or doing a solo run without any companions.

Perks, by the way, are just continuing the tradition of the starting quirk you choose at character generation. The former just aren’t as powerful as the latter, which immediately grant you starting competence in every gun. But they both allow for weirdness, like being the most direct descendant of Neanderthals or gaining combat skills in exchange for never wearing pants and jackets (it’s a cultural thing). You also get a unique perk as well as some skill scores from choosing one of the five Wings: Black is for security, Silver for admin, Orange for prisoners turned indentured menials, etc. This is the closest thing this game has to class differences or a caste system.

There are no dump stats in Encased

And then you get into the game, and it’s immediately apparent the developer of Encased has considered how to make most skills very useful. For one, you never know what skills will be pertinent in the many, many dialogues in the game. In combat, you’re not just shooting people — you’re also using your Criminal skills to swear at them like a sailor to make them fight worse. When interacting with the environment, you can discover secret compartments, hack computers, bash locked containers, and more. Just sneaking around the fights you don’t want to take is also very much supported. 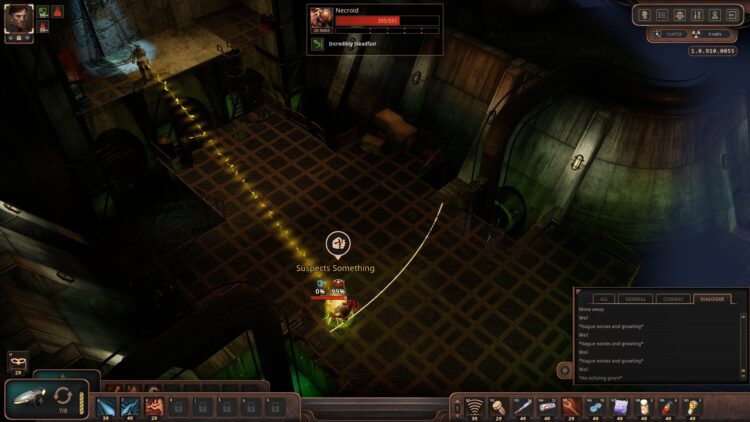 Though you can cheese the occasional battle by just firing at the enemy from outside their detection range.

The combat in the Eased is also good. Everyone gets their spot on the initiative track, and you can actually control your companions. While you don’t have that many different abilities starting out, you quickly gain more and more tools to solve violent confrontations. Actually, you can actually do it non-lethally by just pumping enemy fatigue. Granted, you can’t switch your bullets to stun, and some (read: melee) characters are better at it than others. I just wish that depleting the enemy health points allowed you to fatigue them more easily.

Oh, and fatigue is an ever-present issue for you as well. A lot of character abilities (from medicines “how about you get almost full health without using an item” to even picking locks) cause fatigue, and you start feeling the penalties long before your character decides to take a nap in the middle of the field. You also need to keep track of your hunger and thirst. Curiously enough, having mild hunger decreases your endurance, but increases your initiative.

The Dome giveth, the Dome taketh away

Yeah, quite a few things that offer you tradeoffs in Encased. There’s a high-level Contraptions passive ability increases mechanical damage of your guns in exchange for higher chance of jamming — that’s what you get for fiddling with your guns. Drugs have their negative effects as well as a chance for addiction. Meals can give you flatulence and heartburn. High-level radiation sickness will wreck your body but increase your psychic potential, which is “holy shit, how genre appropriate.”

And you know what’s also Fallout-appropriate? Overworld map travel. On foot or by car, you will slowly traverse the trackless wastes of the Dome, frequently running into random encounters as well discovering permanent spaces by yourself. Here’s where Survival skill comes extra handy, since it allows you to just… dodge a lot random fights. 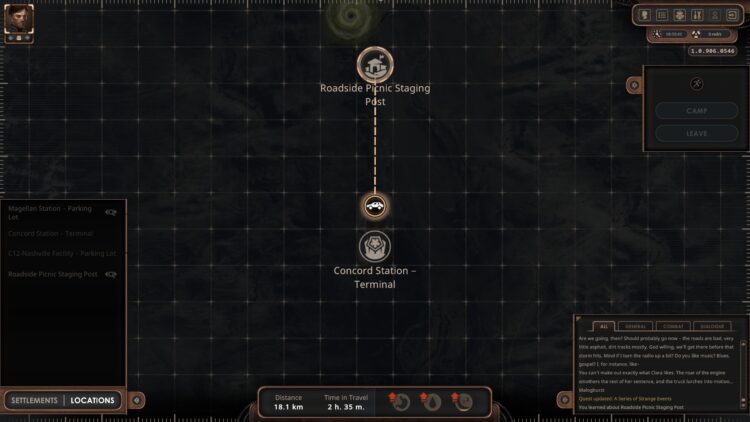 On one hand, the travel in the game is woefully slow if you compare it to real-life. On the other hand, you don’t often travel broken deserts filled with anomalies, bandits, giant roaches, and worse things.

One interesting feature of Encased is that you’ll frequently run into random merchants during the travels. This is very necessary and, in the case of weapons, vital, as there aren’t too many specialized merchants in fixed locations around the world. Moreover, even permanent settlements will feature a spot where random merchants set up shop.

They’re a good source of crafting materials (luckily, crafting in this game is 99% about consumables), because you can’t easily find them in the world. And boy, will you have chances to find stuff in the world, as Encased is full of containers. Just hold down “alt” and watch the map disappear under a swarm of labels for every box, flower pot, and random bit of string you can investigate. It’s fun in its own way, and often gives you experience points for exploration, but it can get a little taxing. 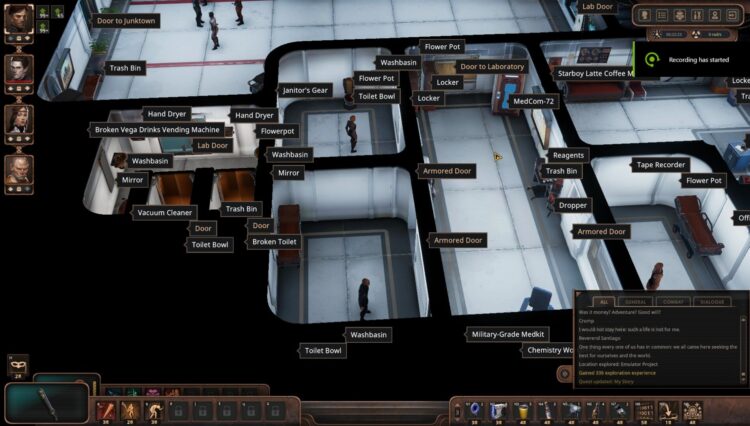 Not contractually obligated to say something negative

With this nice and natural segue into the flaws of Encased, I’ll note another thing: there’s no such view mode — or not one that I could find — for people. This becomes an issue since quest markers don’t exist in this game. What you have are directions on your log. While this is pleasing to old-school grognards who resent the handholding (and they’re true, especially when Bethesda RPGs are concerned), you will still need to occasionally pixel-hunt to find the person you need to talk to.

It doesn’t help that the log itself isn’t always clear or well organized. Sure, this isn’t Morrowind’s “we just pasted the quest giver’s dialogue into your journal, good luck,” but I have encountered cases where the next steps of a quest where unclear. So, I have to get help from Carmine Heights for this project? But I don’t even know the location! Oh, so I need to talk to the Carmine Heights representative here to know where to go? Cool.

It’s a mild irritation, but it is an irritation nonetheless. The rest mostly concerns weird jank that can be patched out, like the goofy flashing logos when using abilities or weird animations that have nothing to do with the ability at hand. There’s also the issue of not being able to loot unconscious enemies, and your pickpocketing may be too low as well. Sure, most enemies don’t really carry anything interesting (and you’re not looting their weapons or armor), but still, this is an issue. There’s also an issue of some salaciousness in the writing in the game, but maybe I just have sensitive sensors. 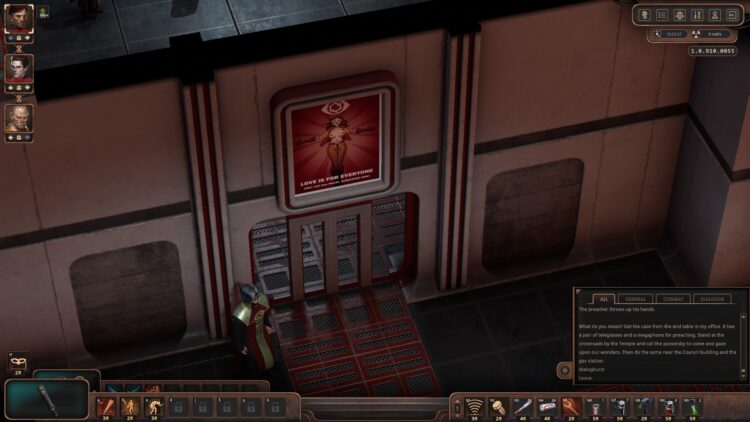 Beyond that mild criticism, the writing in Encased is awesome. Witty, effective, and affecting, it flows naturally, and there’s a cornucopia of it. From dialogues to short text adventures, to adventure descriptions, I love it, top to bottom. Here and there are plastered jokes that people living in countries that once had been gobbled up by the USSR will understand, but they aren’t as plentiful or egregious as in, say, ATOM.

Except for one of the locations being named “Roadside Picnic.” Come on, now! 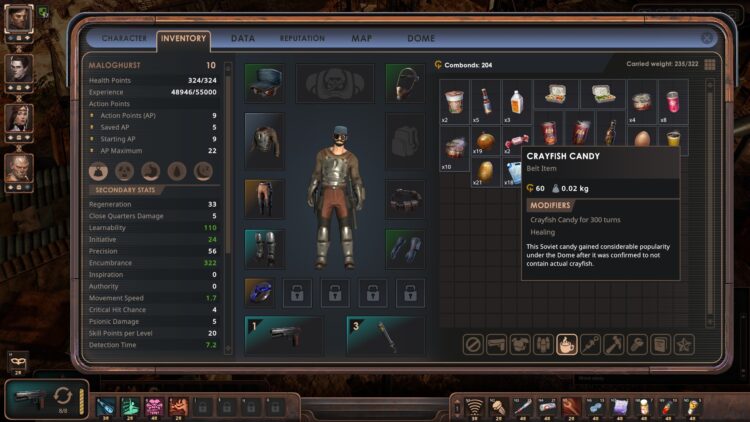 This description gets funnier the closer you live to Russia

The developers also prove their chops where audio is concerned. While the game is heavy on text, a surprising amount of it is voiced either by the narrator or the characters. And it’s all by English-speaking actors. You even have combat barks, which are especially good for the Afflicted enemies. Dark Crystal Games writes that its studio employs people who worked on Mass Effect and Divinity: Original Sin 2, and it absolutely shows in the sound department.

The music is great as well, with the main menu theme being a standout.

Get into the Servoshell, Shinji

All in all, Encased is a good-to-great CRPG and a rip-roaring Kickstarter success. I first tried this game in 2019, when Magellan station was where you started the game and spent entirely too much time before moving on towards the inciting incident. I have seen the improvements that were done over the years, and still, the amount of quality voice acting caught me by surprise. And at this point, I don’t think I need to tell you whether I recommend the game or not.

Some jank does not stop Encased from being one of the most ambitious and greatest CRPGs in years.

By Joshua Chu2 hours ago
Reviews