Endless Legend is a 4x strategy title that’s frustratingly close to being sublime. Amplitude’s follow-up to Endless Space has some of the smartest twists on standard 4x factions I’ve seen in a long time, wonderful presentation (in terms of both art and user interface,) and several mechanics which add welcome flair to the usual genre formula. But this fine work is undermined by a handful of flaws, not least of which is an AI that, even on higher difficulties, is rather passive and easily exploited.

Set in the same universe as Endless Space (though somewhere else on the timeline,) Endless Legend shares that game’s FIDS (Food, Industry, Dust, Science) resource system and the same method of arranging members of your population to direct city production levels. Though it’s fantasy-ish in nature, the planet of Auriga is rich with resources and lends itself to industrialisation. After a few technological upgrades most factions are borderline science-fiction, even though they’re still armed with semi-magical spears and super crossbows. 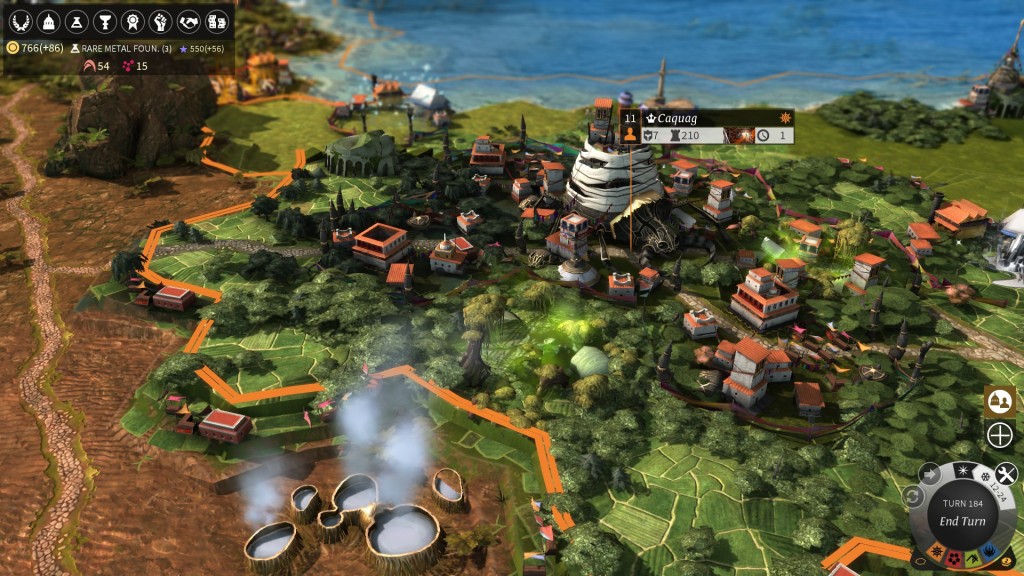 Every faction has their own city design. When zoomed in, even the urban sprawl can look rather lovely.

The game customisation options are admirable and extensive. You have control over a significant number of the factors that constitute either a single or multiplayer campaign; everything from map size (along with continent forms and topography,) to which aspects lead to victory (diplomatic, elimination et al) and the number of turns that particular game will last. Tight, rapid games on small island maps are as viable as sprawling, eight-player sagas across desert plains where the only victory condition is territorial conquest.

That sort of breadth in campaign options is fairly common in the 4x genre, but it’s in the exemplary faction design that Endless Legend really distinguishes itself. Options like the noble-knights-meet-vampyric-soul-sucking Broken Lords, or distinctly un-hippy-like industrial ‘elf’ faction the Wild Walkers are neat twists on convention, but the real stars are the factions which radically alter how the game is played. Chief among those is probably the eerie Cultists, who always operate from a lone city (they can’t build more) and swell their ranks with indoctrinated minor factions.

The Roving Clans also provide an interesting and distinct way to play the game. Unable to declare war themselves (though obviously not prevented from partaking if attacked first,) their faction cities are carried on the backs of gigantic beetles and can be uprooted in order to be moved to more desirable locations. Handy, especially if a captured opposition city has been placed in an unhelpful area. The Clans also benefit from significant trade and marketplace bonuses, encouraging a purely diplomatic and economic approach. Unless you feel like researching and hiring a privateer army to initiate hostilities for you on the sly, of course.

Yes, let’s live together in harmony Mr … err … Belly-Slicer, was it?

Not being able to declare direct war as the Clans gave me a first-hand account of how passive the AI can be. During a 300 turn ‘Hard’ difficulty game, I was briefly at war (once) with some over-eager Vaulters who quickly peaced out after I beat up their main army. That seemed fine, but seeing the ultra-aggressive and hive-minded Necrophage refusing to attack a city I’d inadvertently served up on to them a plate was much more trouble. It was barely defended, isolated and a plump target for a full, four unit stack of Necrophage awfulness to consume. Instead, they completely ignored it and wandered off.

Granted, we weren’t in a full scale war, but had our situations been reversed (and I was a faction capable of initiating hostilities) I’d have snapped that city up before you could say “delicious free expansion and resources.” Taking it would have been a minimal risk in terms of immediate repercussions, and highly damaging to the empire. It’s just about possible that the Necrophage player didn’t have enough Influence ‘points’ to declare war, but I’m not certain whether the AI even plays by those same rules.

In any case, Endless Legend has offered plenty of evidence to suggest that even the lore-styled expansionist factions at times simply aren’t all that interested in fighting.

The finale of that same Clans game was also something of a farce. All three remaining factions in the game were allied, and victory was coming down to whether the Ardent Mage AI would maintain their overall score or I could sneak a diplomatic victory in the final few turns. Sending low cost compliments to other factions helps to build up the diplomatic score, so I ultimately triumphed by platituding my foes into submission. You’d think maybe the Mage AI might have acted sooner to freeze me out diplomatically. Instead, she did nothing.

Zoom out from the game map and it seamlessly switches to this colour-coded view.

The AI also struggles to handle a sustained assault. In another game (albeit on the quite newbie friendly ‘Normal’ difficulty,) playing as the Cultists, I rolled over city after city garrisoned by little more than a couple of freebie militia units. In the diplomatic window, each rival faction professed to be “Terrified” by the weakness of their armies. Well guys, have you perhaps considered building some? In-game empire progression graphs showed each empire had plenty of production and Dust (effectively finance) capabilities. They just weren’t using it to replenish their shattered military.

AI opponents are able to build significant armies. Ones which make use of Endless Legend’s resource-and-research based unit upgrade system, even. I’ve encountered (and lost) to them. But if you skillfully intercept and wipe out their main stack of troops, they seem to struggle to crank out replacements.

Combat has changed a little since I played the game in Early Access, as it’s now possible to give orders to units on every turn rather than providing a vague battle plan every three or so. Endless Legend is primarily an empire building game rather than a turn-based combat title, so I have no problem with battles being fairly rapid and taking place between a limited number of units. In general, the better-equipped, better prepared army will triumph. If you’re sweeping all before you, that’s a reflection of your overall empire management skills.

This might look complicated, but the short version is that militia troop is doomed.

Each faction’s unit roster is comprised of just three distinct combat troop types, though it’s possible to customise and enhance these with armour and item improvements. The selection is small, but every unit has a lot of personality and skill-sets to match the style of the faction (be they weird Preacher units for the Cultists, or horrible skittering insects for the Necrophage.) Battle tactics encourage you to play to straightforward unit strengths (keep archers back, on high ground, and so on) and make the most of your skills. As in Endless Space, armies and cities can both be administered by powerful heroes who level up throughout the game and provide significant bonuses.

While the AI seems to top out at ‘tolerable,’ the writing and world fiction in Endless Legend is of a consistently high standard. Every faction has a unique quest line to (optionally) follow for the Wonder victory condition, which as well as offering an interesting and RPG-like road to triumph is given depth and meaning by the accompanying faction text. Amplitude’s writing creates a planet that feels properly alien, populated by strange factions with their own unique histories, and rich with interesting resources to be gathered, utilised for their properties, or sold at the game’s marketplace. 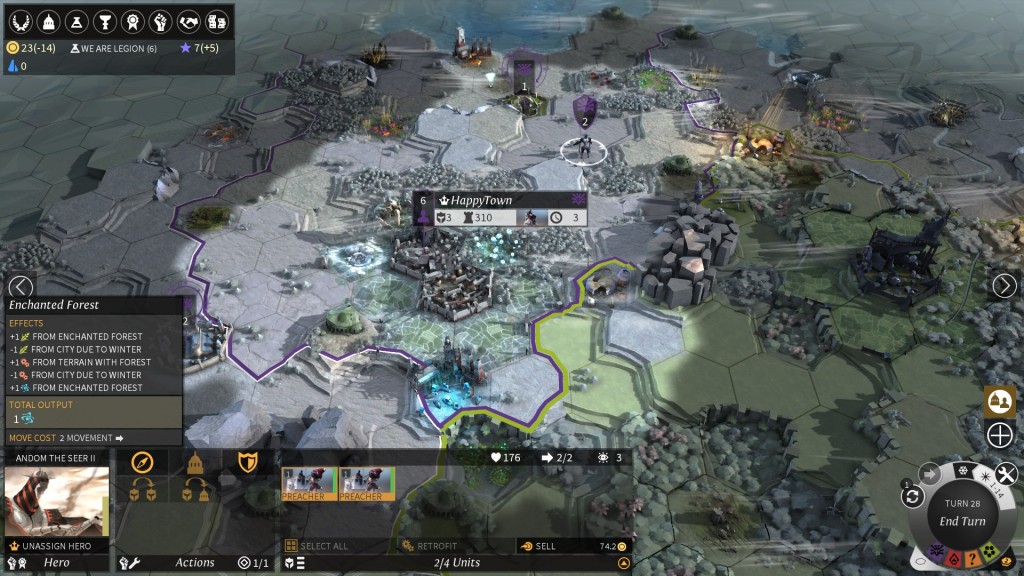 Winters will slow your armies and production. They show up more and more frequently as the game reaches its conclusion.

Navigation through this multi-layered and complex game is also pretty painless, thanks to a user interface that’s clear and logical. At first the text seemed far too small on my monitor at 1080p, but the options house a ‘larger interface’ toggle which probably saved my eyes for another couple of years. The images in this piece are all using the larger interface.

Certain aspects of the game are tricky to figure out without referring to the manual or hunting down a relevant forum thread (good luck sorting out precisely how city districts or oceanic trade routes function without some guidance,) but there’s a solid, lengthy tutorial that covers most of the essentials.

Endless Legend iterates on several 4x staples, typified by its approach to the tech tree. This isn’t so much a tree as a six-era tech progression, during which the player is free to choose whatever technologies they wish, and each discovery increases the overall cost of the next. The only prerequisites to progression through the ages are a set number of researched technologies from the prior era. It’s a system that manages to offer an unrestricted strategic path, while being straightforward at the same time. There’s no researching of a redundant technology just to reach the one you really want further down the ‘tree.’ Instead, you’ll be weighing up whether to skip this era’s resource-specific weapon and armour techs altogether in favour of something more pressing, and waiting for the next age’s military equipment instead.

I’m also a big fan of the game’s system of one city per region. It helps to compartmentalise your empire and staves off a lot of the tedious micro-management that can sometimes creep in to these types of games; at least until the very late game period.

Diligent scientific research has resulted in my people no longer being idiots. Hooray!

Though it’s come out of Early Access in decent shape, Endless Legend does have a few bugs and stability issues. During a particularly rough patch of one campaign the game crashed a couple of times within the same hour, but then decided to sort itself out and never locked up again. Reloading a save put me in a Cold War diplomatic state with one faction, when previously I’d be trucking along at Peace. I’m also fairly sure that the Stun skill on units is bugged, because while it says it has a pretty low chance of success (10-20%,) I’ve found that’s more like the failure rate. At the moment it’s possible to abuse that skill and keep most enemy units stunned for almost an entire battle.

Endless Legend is a joy to look at, smooth to navigate, and set in one of the most creative and interesting 4x settings of recent times. But while the factions are idiosyncratic in the most positive possible sense of that word, the AI controlling them is peculiar in a less welcome way. Too often the AI factions seem content with being passive and under-defending their cities. And while it’s possible to up the challenge by substantially raising the difficulty level, this tackles the problem in the least desirable of ways; boosting the AI with absurd resource bonuses instead of additional strategic intelligence. The included multiplayer mode can mitigate this to an extent, but unless you know a regular crew of dedicated 4x players you’ll be making use of the AI to at least some degree. What Amplitude have created is a terrific foundation, but Endless Legend isn’t yet the sublime experience suggested by so much of the game’s design.

Tropico 3 is free at the Humble Bundle store today