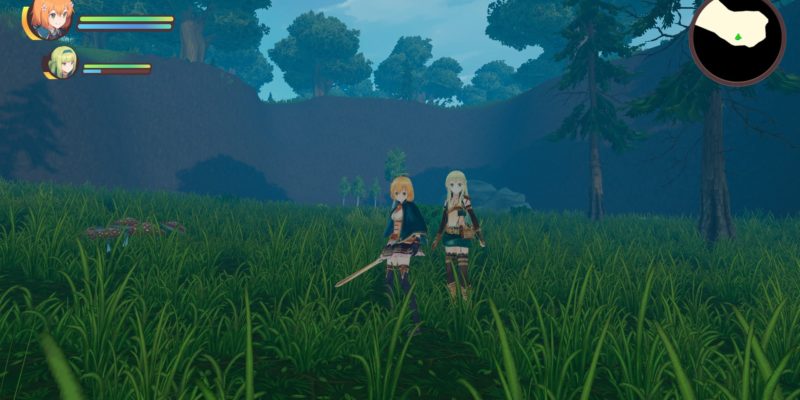 Moving from creating visual novels to making action RPGs is a fairly giant leap. Visualnoveler, the aptly-named visual novel developer, is attempting just that with Eternal Radiance, which launches into Early Access this week. Only time will tell how it shapes up, but, at the very least, the game seems to already have a base from which to grow.

What are ya buyin?

As Eternal Radiance is just now entering EA, it’s normal to not expect much meat. However, the game has more content than you’d expect. The finished product is said to contain 14 chapters and this initial build has the first three. But just those first few chapters alone offers at least eight or so hours of gameplay. The finished game is said to be aiming for around 30, but I’d imagine it’ll take even longer.

Looking at Steam screenshots, it isn’t immediately clear how much of the game is a visual novel and how much is an action RPG, but it’s a fair mix of the two. You’ll spend a good amount of time reading unvoiced, yet well-written text accompanied by 2D character portraits and hand-drawn backgrounds. Naturally, there are also CGs included occasionally. The 3D models only exist in the adventure fields, however, as towns are all completely menu-based. These two styles work fairly well in tandem with one another, though. 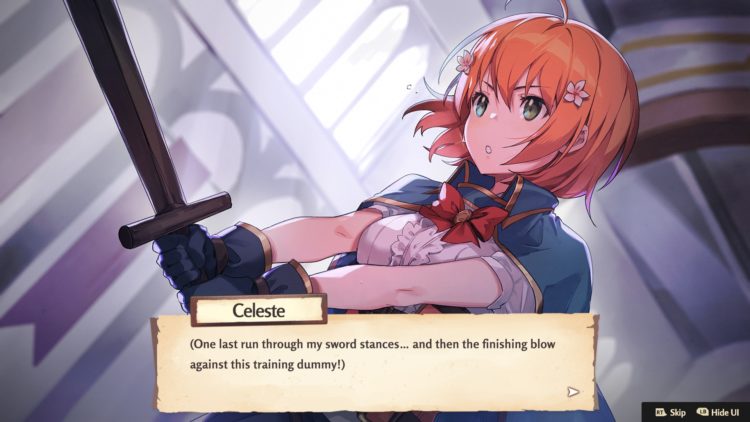 Eternal Radiance tells the story of a young squire named Celeste, who is setting off for her initiation mission that, if successful, will make her a full-fledged knight of the Ashen Order. Naturally, the world is beset upon by mysterious magic artifacts that turn nearby animals and beasts crazy, and it’s the job of the Ashen Order to fight them. At the beginning of the game, Celeste is sent on a voyage to procure one of the artifacts and successfully returning with it will allow her to fully join the order.

However, something goes wrong and the artifact is stolen, so she sets out on a quest to get it back to make up for the shame of losing it. Oh, and to become a knight too, of course. The story is acceptable for what it is. The dialogue reads well and the character’s personalities come through clearly. The story isn’t all that interesting, though, as it’s typical fantasy RPG content, which there’s not necessarily anything wrong with. As anyone fond of anime aesthetic RPGs will likely be expecting, everything from the general narrative to the characters and their designs is competent yet generic.

The visual novel sections in Eternal Radiance have their typical flow. You go to a place and sit through some mandatory dialogue and then you can freely talk to people via the menu. Each area has a set list of characters you can speak to, and those with exclamation points above their heads have sidequests for you to take. These sidequests are completed by either going and accomplishing a task in an adventure field or by simply talking to other characters via menus. 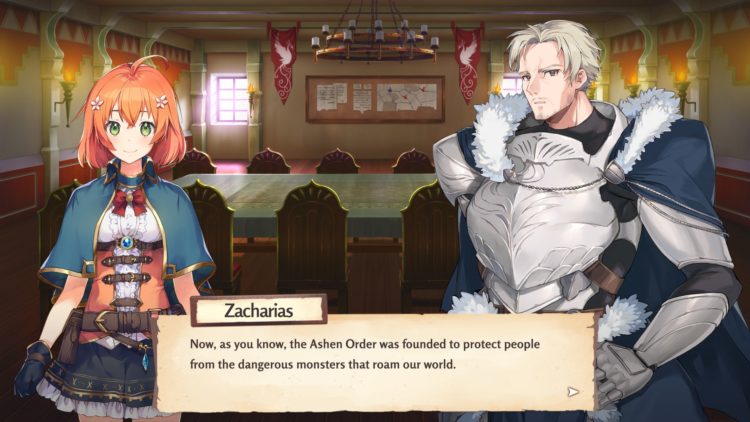 Eternal Radiance is still an RPG, so there are also shops and the like where you can buy items and equipment or enchant your weapons. Enchanting works by making certain items with crafting materials you find in adventure fields and then applying the items to your weapons, which can add attack, defense, health, or mana to Celeste’s stats as long as they’re equipped.

Then there are Eternal Radiance‘s adventure fields. Unlike towns, these are fully 3D and allow you to take Celeste through them directly. They’re large, albeit sparsely-detailed and quite dull visually. Models are simple and not much to look at, and textures are much the same.

That would be more acceptable if it weren’t for the fact that the combat isn’t all that great. It’s perfectly functional, but it simply isn’t very entertaining. You can only play as Celeste, but she gets two companions that follow her around to help fight enemies. Well, to the best of the artificial intelligence’s meager abilities, at least. Celeste fights with a sword and uses skills in a very typical action RPG fashion. 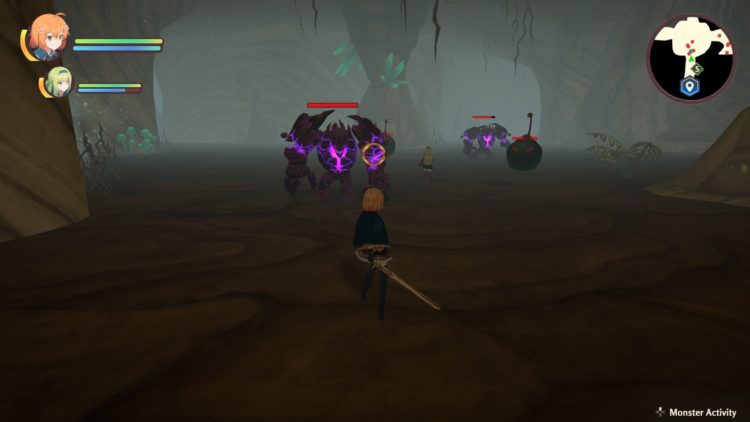 She’s got both HP and MP which can be refilled with potions or with orbs dropped by enemies. Her companions also have HP and MP bars and you can also equip them with gear to make them stronger. Celeste has a basic sword combo and air slashes, plus she learns new abilities that use MP. Most of these are combat-oriented and are divided between ranged attacks and melee. Every time she levels up, she gets a point for her talent tree, which allows her to improve certain aspects and abilities. She can have four abilities set at any one time.

It’s a kind of magic

Unfortunately, the abilities are not only surprisingly weak, but they use up a ton of MP. Early on, using one of Celeste’s only decent abilities eats up the majority of her MP bar, requiring you to either chug a potion or get orb drops from enemies to refill it. But enemies don’t drop orbs very frequently, meaning that you’re almost exclusively going to be using your basic sword attacks. It’s kind of underwhelming.

As I said, the combat is functional, but there’s not much to see here. Enemies move in groups in the adventure fields and you can just run right past them much of the time. When there are no enemies around, Celeste breaks into a dash but slows down as soon as enemies enter her range. In addition to attacks, Celeste can block and dodge roll. 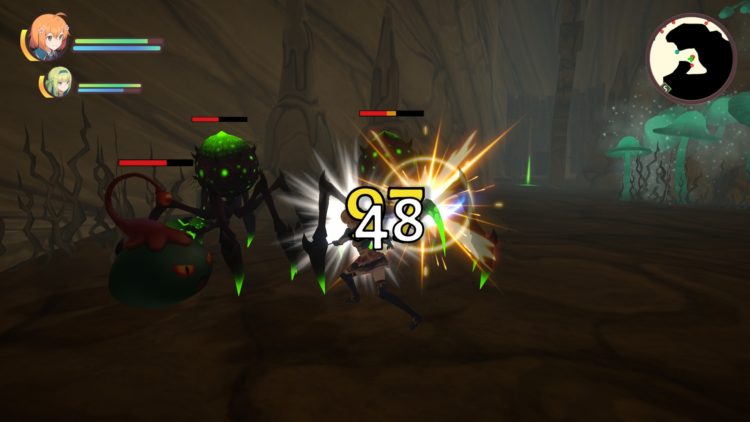 Both of these have bonuses when timed well, with perfect blocking granting counters and dodging at the right time giving a speed boost. The enemies just aren’t fun to fight, though. The combat doesn’t have much power to it and you just wail on things until they die. This is complicated by how many enemies you often have to fight at once, where you’ll lock onto one enemy out of many and then have to spend a lot of time dodging as enemies you can’t see pelt you with ranged attacks.

When Eternal Radiance granted me Celeste’s first companion, I assumed things would even out, but they don’t. Celeste’s companions are poor. They use their MP up very quickly and often get themselves killed shortly after. They tend to just start using their abilities on the first enemy they see and then they stand around barely doing anything until something you kill happens to give them a few orbs.

And some of the enemies are too tanky. Fighting becomes a tedious slog after a while, but if you avoid combat, you won’t be able to win any boss battles. There are reasons to look around the adventure maps, though, as there are treasure chests and quest items to find. But I can’t help but be disappointed by what Eternal Radiance is offering so far. 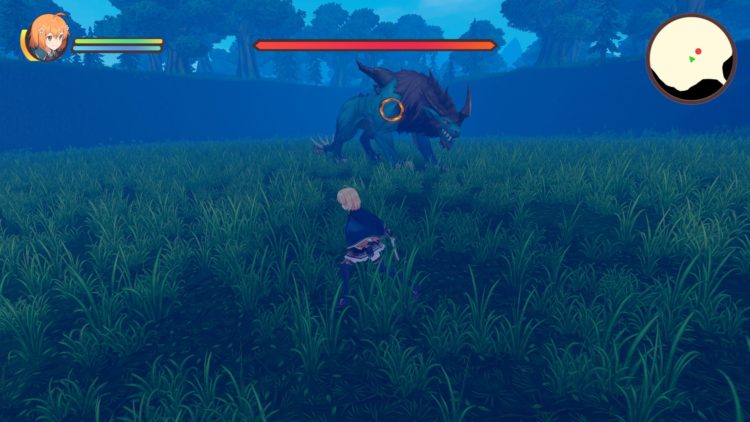 Look to the future

When Eternal Radiance first caught my eye last year, I thought it looked like a fun time. As of now, though, I just find it hopelessly dated and underwhelming. The visual novel story is generic and uninteresting, even if the quality of the writing itself is better than I expected, and the combat is mediocre and tedious. I’d love to see the game get turned around, but it seems like the basic mechanics are almost completely set and that additional content is going to be the focus from here on. If you need an anime RPG to keep your eye on, there are things that you may enjoy, but, so far, I’m not exactly impressed.

By Jason Rodriguez7 days ago
Previews