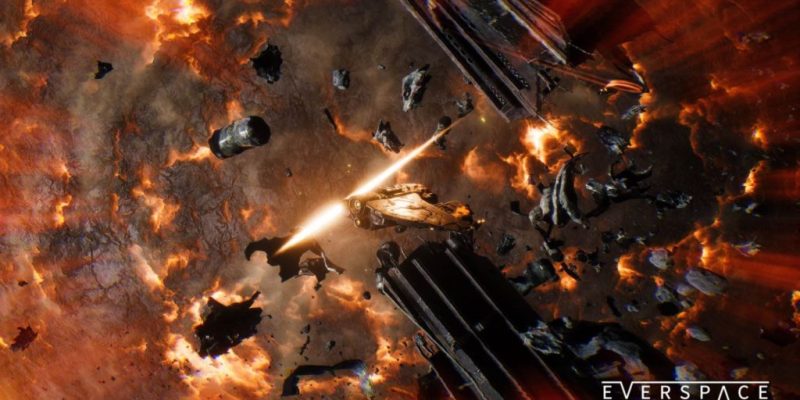 Everspace is growing with a new expansion called Everspace Encounters, which adds more content to what is one of my favourite games of this year. In this DLC, Rockfish has built on the foundations of the original release by giving players more to think about as they tackle the rogue-like experience.

As someone who doesn’t generally go for rogue-likes, it’s the action of Everspace that kept me locked in run after run. Not to mention the dilemmas Rockfish put you in when fuel is running low and systems are heavily damaged. Do you attack that friendly fuel tanker and unleash a world of pain just to get your hands on enough fuel to jump?

In the Everspace Encounters expansion, Rockfish has added one new ship to the roster; a medium fighter equipped with new electronic weaponry (such as EMP and a lightning laser) as the basic starting weapons. It’s a pretty good ship compared to the originals, with more device slots to help make use of some of the new gizmos added in the DLC. As it’s a fighter, it feels maybe a little too similar to the Interceptor which would be my only gripe. The good news is that players don’t need to purchase the new Sentinel when they launch the DLC, no need to find the credits to unlock it. Load it up and the ship is available right away.

It’s been a few months since I traveled into space to traverse the game’s sectors, so I was a little rusty. Thankfully though, the DLC doesn’t change the core gameplay. Instead it augments it with new additions to make the game even more challenging.

The most meaningful additions in the DLC are the new NPCs and missions. Now, as players travel beyond sector 2, new NPCs are encountered offering all kinds of missions that will keep you busy. With more life now in the universe, the game feels a little more fleshed out. Great for veteran players, and even more so for new players who may be jumping in for the first time.

Missions vary, and some are bloody hard. One, in particular, involves grabbing resource containers from G&B transport ships. Just about every time I reached the sector the mission was in, my ship was in a bad state. Taking on the challenge would mean certain death and blowing up the transport ship could destroy the objective. That’s Everspace for you, having to make tough decisions. Should I just go for it? Should I skip the mission in this run? See, that’s what I really enjoy about Everspace, it’s constantly making you evaluate your situation; and the DLC ramps that up.

Also new to Everspace Encounters is the addition of the new ship stations. These large floating stations give players the opportunity to get much-needed work done on their ships such as repairing or upgrading. Think of them as a one-stop shop that can help with multiple problems. That said, in the hours I have sunk into the DLC it took quite some time to find one. Eventually in one run when I hit sector five one popped up. It was just at the right time too, my ship was a complete mess.

For the first time in Everspace Encounters Rockfish take players to the homeworld of the game’s main protagonists, the Okkar. This special mission is revealed through NPC interaction and you’re asked to head through a wormhole. I won’t spoil the rest, but like many of these new missions these challenges will test your skills.

Simply put, if you have Everspace and want to experience the game in a new way then the Everspace Encounters DLC is well worth the asking price of £6.99. If you have not picked up Everspace yet then make sure you pick up the DLC at the same time. Even after playing the core game I have sunk a load more hours into the DLC thanks to the new challenges.

Rockfish has made an already great space shooter even better with some great new missions, along with NPCs that add some real flavour to the experience. This is a very solid piece of DLC.