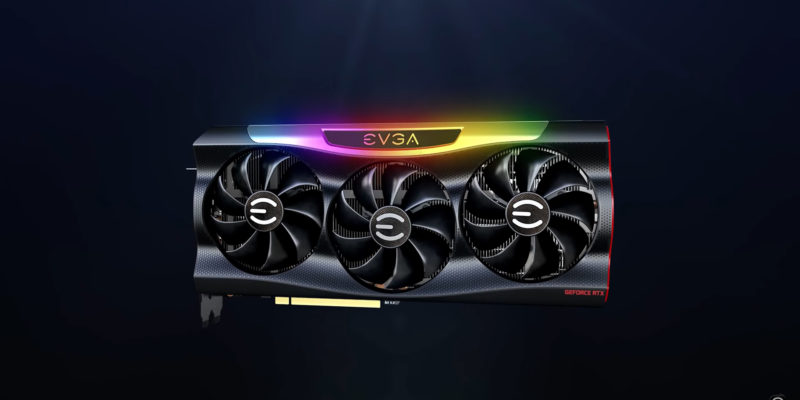 The excitement over Nvidia’s RTX 30 Series cards is really heating up. Fortunately, EVGA has the cooling solutions you need to achieve 4k 60 fps with ray tracing, or even 360 fps in 1080p. Nvidia’s partner didn’t waste any time in announcing its own lineup of next generation GPUs, and the options look promising. By now we’ve come to expect premium quality and performance from EVGA in particular. Of course that’s not say that competitors like MSI, ASUS, and others aren’t stepping it up too. EVGA has the best lineup at the moment though. Whether you just want air cooling, or are thinking about creating a custom water loop, the EVGA RTX 30 Series has you covered.

Those familiar with the company’s cooling options since the days of the Pascal 10 Series will know what to expect. For air cooling, EVGA has the standard triple-fan XC3 along with FTW3 model which features a larger cooler and RGBs, too. Things get more interesting with the water-cooled options, and as an owner of a GTX 1080 Hybrid, I can’t say enough good things. The water-cooled/blower combination models called the Hybrids, will return for the 3080 and the 3090 cards. Just as a note about the Hybrids, they arrive factory sealed and don’t require any assembly or maintenance. All you need to do is plug in the card and mount the attached radiator in your case and you’re set to enjoy ultra-low thermals.

Furthermore, the 3090 already has a flagship Kingpin model listed, which appears to follow the same Hybrid design. You can expect to pay a pretty penny for those, as they will sport a hefty overclock. Additionally, the Hydro Copper variants are back (for the 3080 and 3090 models), and those should appeal to DIY consumers.

Cool your brakes, it’s not time yet

EVGA will certainly add to the lineup over time as Nvidia reveals more of the RTX 30 Series. We should expect a 3070 Hybrid model, and of course 3060 variants as they are revealed. As for EVGA’s current offering, we don’t have release dates yet. We do however know that the Nvidia Founder’s Edition cards are coming in later this month. Additionally, MSI confirmed today that its cards will arrive on the same dates as the Nvidia models. It’s certainly possible EVGA could launch its 3080 options as soon as September 17, but only time will tell. Currently, EVGA is not accepting pre-orders, but we suspect more information will become available leading up to September 17. For technical details and more information on EVGA’s lineup, check out the series product page.