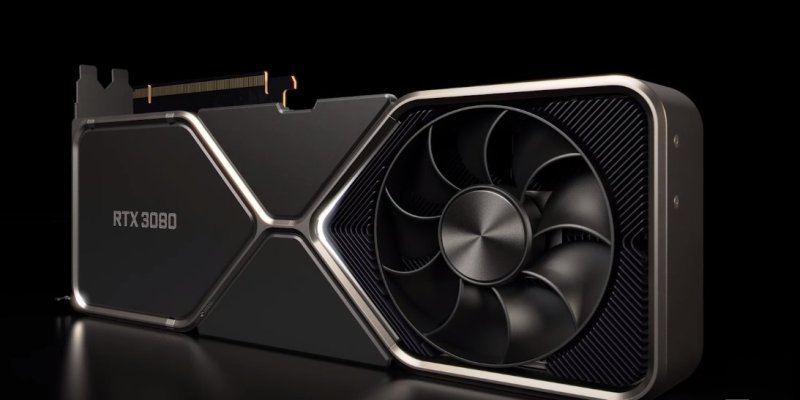 After months of rumor and speculation, Nvidia finally revealed the first lineup of the Ampere-powered RTX 3000 series family of graphics cards. During its digital event on Tuesday afternoon, Nvidia CEO Jensen Huang announced the brand new flagship GeForce RTX 3080 along with the RTX 3070 and the RTX 3090.

According to Huang, the new lineup of graphics cards will lead computer graphics into the next generation thanks to real-time processing power and feature sets that double in power compared to the prior Turing-based graphics cards. For example, Nvidia claims that despite it being half of the price of the prior top-level card — GeForce RTX 2080 Ti — the RTX 3080 will perform at a 1.5x boost.

Welcome to the next generation

All cards will feature real-time ray tracing along with AI-powered DLSS, creating what the company feels are the most photo-realistic graphics ever developed. From rust stains on piping to the glare from a light at a specific angle, the RTX 30-series lineup aims to enhance the visual experience of users in ways never before seen. Huang stated that the cooling fans in the new lineup are three times quieter than the last generation thanks to the new way the air flows in and out of the cards. The new fan placement sees one fan on the front of the card and another at the bottom.  The new push and pull configuration allows the card to push heat out of the exhaust vents more effectively, and reduce the amount of heat left behind inside the case.

When it comes to the specs of the Nvidia RTX 3000 series, Huang’s announcement confirmed quite a bit of the rumors that made it to the public.

The RTX 3090 includes 24GB GDDR6X memory, whereas the RTX 3080 features 10GB GDDR6X. The mid-level RTX 3070 has 8GB, but it is standard GDDR6 memory. However, all of the cards support PCI-E 4.0 as well as HDMI 2.1 and DisplayPort 1.4a. These features allow for fast visual processing times and quality. They can all also support up to four monitors at once.

During the event, Huang referred to the GeForce RTX 3080 as Nvidia’s new flagship card. While the RTX 3090 is a more powerful card overall with the ability to provide 8K resolution for gaming, it’s not necessarily going to be a card for most gamers. Where the RTX 3090 shines, is for those doing high-end graphics rendering or video editing work. It’s a card that will help provide Titan-level quality without the staggering Titan-level pricing. 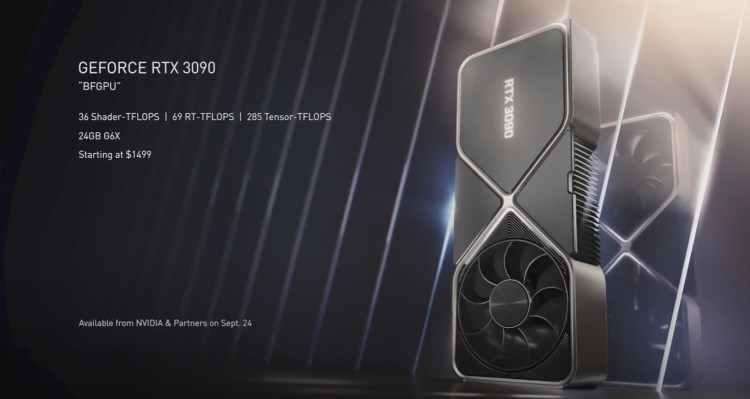 The RTX 3080 will allow players to run next-generation games at 4K resolution and 60 frames per second with little to no problem. Of course, users will want to make sure the rest of their machine doesn’t bottleneck the card’s performance.

Despite it’s lower specs compared to the other two higher-end cards, the GeForce RTX 3070 will be no slouch for players. With it’s 20 shader TFLOPS, 40 RT TFLOPS, and 163 Tensor TFLOPS, the cheapest of the cards unveiled on Tuesday still outperforms the RTX 2080 Ti.