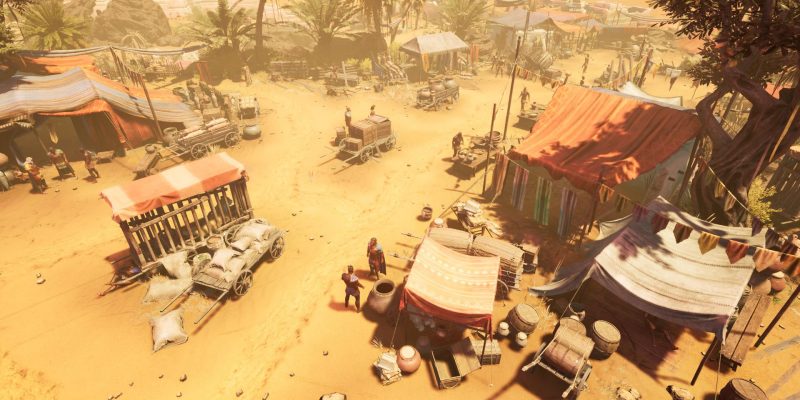 “Rome is big.” While those words could easily be describing the city or the empire, they aren’t (which you could probably tell from the italics). They’re from creative director Jonas Wæver as he excitedly discusses Expeditions: Rome, the newly announced title I got a preview of a few days prior to writing this. And, while that might seem like a bit of a trite thing for me to quote, he’s not kidding around.

Expeditions: Rome is the third in the series which started by exploring the New World with Expeditions: Conquistador back on Kickstarter in the ancient era of 2012. For the unfamiliar, these CRPGs are all about in-depth tactical combat, meaningful dialogue choices, a degree of exploration, and some light strategizing and survival on a big world map. And Rome? Rome is big.

As testament to the game’s size, the presentation was a shotgun blast of information, rapidly shedding light on lots and lots of little bits and pieces. But size aside, there are a few particular bits that we should probably talk about.

Expeditions: Rome is set in what (if I can remember my history correctly, so no guarantees) was pretty much the transition of the Roman Republic into the Roman Empire with the rise of Julius Caesar. Your player-created character will be following in his historical footsteps, joining in the military campaigns in Greece, Northern Africa, and Gaul, while also doing a spot of politicking back in Rome itself. So that’s three gigantic maps to explore, quest, and battle your way across.

But despite the grand maps and campaigns, this is still a personal story. While the devs wouldn’t be drawn into discussing the plot too much, it sounds like — at the very least — you’ll be feuding with a rival back in Rome, who’ll be sabotaging your efforts. Possibly quite successfully, as it was implied that your character’s initial forays into the military may be due to fleeing Rome itself, and reclaiming your glory will likely be one of your objectives. Combat is hex-based, but follows most of the modern simple conventions of turn-based tactics. And if you glance at the objectives, you’ll see that you even have some choices here.

The tactical combat itself has seen some revamping since Expeditions: Viking. Expeditions: Rome is still all about the turn-based tactical combat in the usual way (one attack action and one move action, or spend both to move further), but things have been focused a bit. There are four classes available, each with three different skill trees, which is a bit of a departure from Viking‘s build-your-own approach.

Those classes appear to play rather differently, too. Front-liners effectively have a second health bar from their shields, which also give them protection from arrows (and unlike Viking, they can repair these shields). The Velites, meanwhile, seem a bit more like rogues, with Focus points that work independently from their attack and movement actions. This lets them chain together strings of actions: expend a Focus point to use one ability, then use a particular attack to regain Focus, then move, then use that regained Focus point to do something else. No basic attacks, here. Everything has some sort of extra effect.

One particularly neat touch is that there’s absolutely no basic attack. Abilities are unlocked through the class trees, but every weapon has its own set of skills. A bow, for instance, can’t just “fire.” You can aim for the head, or use different types of arrows like barbed or flaming arrows, and each of these will have different effects that aren’t just “does some damage,” which will synergize with other classes and other skills. And that doesn’t describe all bows, either: different bows will have different skills, as will different swords, spears, shields. The thought of getting to experiment with some of these synergies has me salivating.

Excellently, even battles themselves will be linked. The climactic “siege” missions that take place at pivotal points of the story might actually be five or six individual sections of combat that will impact each other. One group may be off sabotaging a bridge to prevent reinforcements from arriving at one of the other battles, so your success or failure in each may well have a direct impact on how that next encounter will play out.

Expeditions: Rome isn’t just about the tactical combat, though. You’ll be playing as a legatus, so you’re not just in command of you and your party — you’re in command of an army, and that army will need to be sent out to conquer territory. This, in turn, lets you upgrade your war camp, which will afford you buffs and bonuses. It’s only a light strategy layer, but these little meta-game elements have always been a delightful distraction in CRPGs. What I don’t know is how the army battles will play out. It sounds a little like you’ll be playing particular strategies for your army like cards, but that may well have just been an analogy. Thankfully, no time limits on world map stuff, this time!

And then we have the actual role-playing. Without going into too much detail: yes, this is an RPG. There are plenty of dialogue options that’ll help you get items or avoid fights, and your party’s morale and opinion of you (as well as the nuances of the plot) will change heavily depending on the choices you make. Some weighty decisions are telegraphed: do you raid a weapons cache to aid the army, or do you search for evidence against your rival? However, you may not expect that sparing someone’s life at the beginning of the game might lead to you defending those actions 30 hours later.

Interestingly, you can also play as a male or female legatus, and the female path is apparently rather different to the male one. Which is probably unsurprising, as if memory serves, women in the Roman military were unheard of. I’m kinda looking forward to seeing how that path plays out, and the reactions your character might have to face there.

Expeditions: Rome won’t be built in a day

So yes. Saying that Expeditions: Rome is big may, at a glance, be a bit trite, but if anything it feels necessary. If what I’ve seen is an indication of the scope, then this is indeed going to be a big game. There’s promise here: a fairly unique take on tactical combat and itemization, an interesting meta-game element, some light strategizing, a fascinating era to explore, and a lot of narrative branching. If this comes off, it should be something quite special — and even at their worst, the past Expeditions games have never been anything short of interesting.

Acta non verba, though. I’ll have to wait until I get my hands on it to find out for sure whether it lives up to these possibilities, and that won’t be until later in 2021. Your war camp will look a little different in each region, but it’ll also look different as you spend resources to upgrade its facilities.

By Cameron Woolsey14 hours ago
Previews