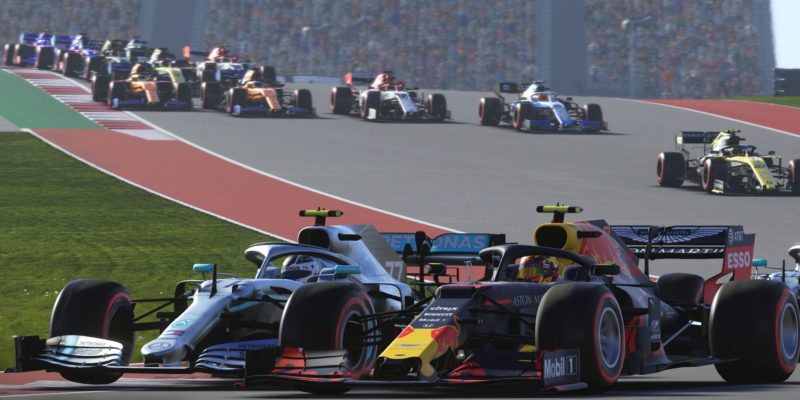 As just about everyone in the world is aware, the outbreak of COVID-19 (the novel coronavirus) has sent the globe into a frenzy. In addition to several nations issuing lockdowns for its citizens, various major events have been either postponed and canceled. This effect is arguably most seen in the realm of sports. With the F1 Grand Prix also being one of the events that had to be altered due to COVID-19, the official Formula 1 organization has decided to seek an alternative method. Enter the F1 Esports Virtual Grand Prix series. This is the official replacement for the real-world GP, and it’s being powered using Codemasters’ F1 2019.

From the tarmac to the TV

In its formal announcement, Formula 1 explains that the virtual F1 GP has “been created to enable fans to continue watching Formula 1 races virtually, despite the ongoing COVID-19 situation that has affected this season’s opening race calendar.” The first race will begin this weekend—Sunday, March 22, 2020. The virtual series is going to take the place of every postponed real-world race for every race weekend, and it is set to run until May 2020.

Each broadcast of the virtual Grand Prix is going to be held on Twitch and Facebook, with a runtime of 1 hour and 30 minutes. There will also be a qualifying period, just like in the real world races. Formula 1 acknowledges the fact that its real-world drivers have varying levels of skill. As a result, the game settings for F1 2019 will be “configured in such a way to encourage competitive and entertaining racing.” Each car’s performance is going to be equal and they’re going to have “fixed setups.” Vehicle damage is also going to be reduced. The only sort of customization that is going to be allowed is “optional anti-lock brakes and traction control” in order to help drivers that aren’t too familiar with the game.

That said, while each driver may certainly try to bring their A-game to the video game, their performance is going to have no real-world repercussions. Formula 1 insists that “the [virtual] series is strictly for entertainment purposes” and the actual drivers will not receive any official World Championship points.

Another part of this makeshift F1 2019  Grand Prix is that normal players will actually have a chance to test their metal with the real-world drivers during non-race weekends via online exhibition races. Exact details for that will be shared later.

The use of F1 2019 to replace the real-world Grand Prix is actually not unique. Over the past few days, other areas of the sports world have also conducted similar feats. For instance, over in the USA, an NBA team used NBA 2K20 to play a virtual rendition of their canceled game. In Europe, some football teams made use of FIFA 20 and Football Manager to replace their real-world matches that were also canceled.

Situations like these go to show just how far video games have advanced thanks to modern technology. These titles are crafted to mimic real-life so closely that now the official teams are making use of them to replace what would have been real-world events. While we’re still not at that true 1:1 scale, it does come surprisingly close. But clearly, it’s already close enough to be recognized.

By Otto Kratky31 mins ago
Industry