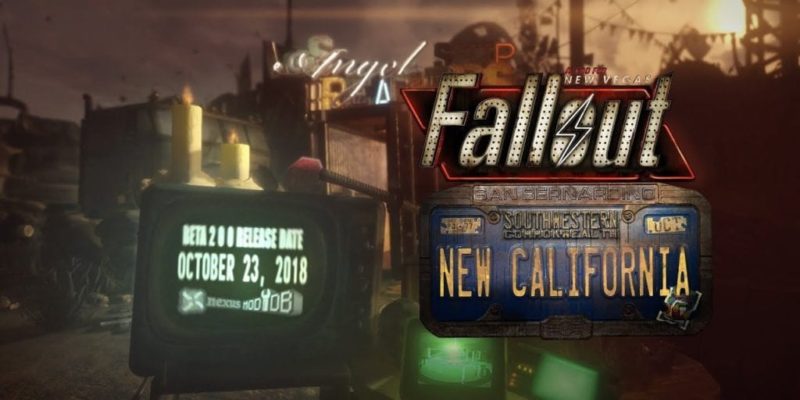 It’s been a busy week for Fallout fans following the Fallout 76 reveal but there’s more Fallout to come. The Fallout: New California total conversion mod, which is a prequel to Fallout: New Vegas, now has a final release date.

Fallout: New California is set to release on 23 October after five years of development. Beta sign-ups will apparently be taking place in July, and although the main questline has been completed, the team are wanting more time to work on side quests before the October launch. The team explained why they want these complete for the final release.

Because something is missing — and all the testing guys noticed — is side quests. Again, not the end of the world, but you hit this story with huge replete branches 16,000 lines of dialogue deep and you expect some little moments with characters off to the side of the big arcs, and there just aren’t that many of note. Again, because there was no one to code it! I’d also like to take time to revise some plot holes and gaps in the open possibilities that appeared in testing, and more streamlined opportunities for branches that aren’t so hidden in past decisions that you’re locked into a tunnel til the next major turn.

So we will code that ourselves the hard way, and provide a lot more support in optimizing the engine side of things. Our art is just running up against the limits of what this old engine can do. We need source code. Or, we need to do tedious work to work around limitations on both low end systems and high end ones that can handle all the pretty stuff at 60fps.

Fallout: New California will start players in Vault 18 with a new character and there are 16 main quests and numerous side stories making this a mod you’ll probably want to play. Keep eye on the mod page for more updates and that beta test.

First-person grappling platformer The Free Ones releasing in July