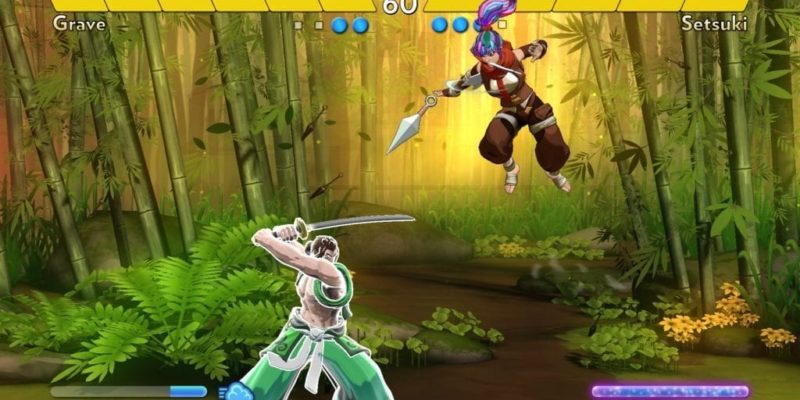 For many, one of the most daunting things about fighting games is learning each character’s repertoire. Between special moves, combos, and supers, it can create a barrier that some people just don’t care to get past. Fantasy Strike attempts to circumvent this while still providing a top-notch, challenging 2D fighter.

Since Fantasy Strike is a one-on-one fighter, there naturally isn’t much focus on story. The premise here is that a rock creature wants to bring the races of the world together, whether they be regular humans, that one fish guy, a panda, or, uh, rock creatures. To do this, he puts together a fighting tournament or something. It’s really not important.

Fantasy Strike has a varied cast of characters that all feel quite different from each other, despite how reined-in their movesets are. They’re all broken up into categories, such as zoners, rushdowns, and grapplers. Some characters focus on projectile attacks, others on fast-paced hit-and-run tactics, and some on powerful grabs. Certain characters also offer a mix of these, so it’s pretty easy to find at least a couple that will fit your playstyle. 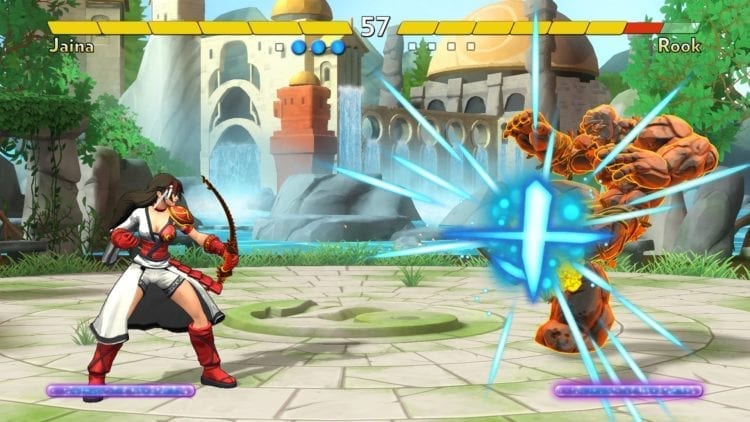 Since there are no commands to input, each character makes use of six buttons. They can all jump and use a melee attack, two special attacks, a grab, and supers. There isn’t any ducking, but certain attacks have variations based on whether you’re pressing left or right or whether you’re in the air. In case it isn’t clear, just because there aren’t commands to memorize doesn’t mean there isn’t a ton of stuff to learn. And if you want to make any headway online, you’re going to need to learn a whole lot.

The fighting of Fantasy Strike is uniformly excellent. The controls are responsive, the fundamentals are very clear, and the gameplay is generally consistent, even though I’ve occasionally noticed instances of my character blocking attacks when I wasn’t holding the button. I was also impressed with the net code. During online matches, I never had any issues with random disconnections, input issues, or general lag.

As for the amount of content on offer, Fantasy Strike has ten characters. Some of them are exactly what you’d expect from a fighting game, such as male and female samurai-type characters, a bald martial arts master, and a female ninja. Others are fairly unique, such as a painter who fights with her brush, a fish-man who uses water-based attacks, a gambling panda that has randomly-selected powerups, and an aristocrat accompanied by a ghost that he uses to grab his foes. 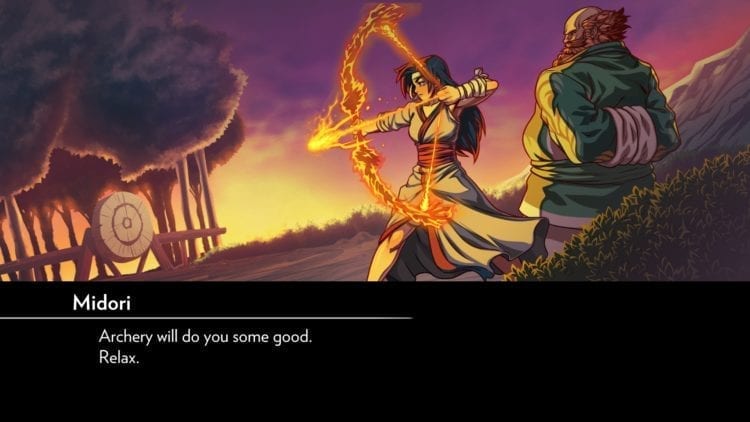 In addition to how different the characters feel, Fantasy Strike also has some unique systems in place. One of the most important ones is that the characters have different amounts of health. Valerie, the painter I mentioned, is based around quick strikes and high mobility, so she only has five units of health. Rook, the rock creature behind the tournament, has eight, but he’s the slowest character in the game. Attacks from one character compared to another can do different amounts of damage as well. If Valerie grabs an opponent, it’ll only do one unit of damage, while Rook’s grabs do two.

Many characters’ supers only do a single unit of damage, while others can do up to three. This can make matchups wildly uneven for players who don’t have a great feel for the game yet. Rook may be slow, but he does a ton of damage. A new player using him against a new player using Valerie can likely put the Valerie-user at a pretty major disadvantage, as Rook’s super grab can take away 3/5ths of her entire lifebar. However, the game compensates for this nicely.

For starters, Fantasy Strike provides a way to counter regular grabs. All you do is stop pressing buttons and you’ll pull off a yomi counter, which is a great way to punish someone spamming grabs. Each character also has numerous ways of dealing with situations based on the ranges of their attacks and their mobility. It’s necessary to constantly think tactically, as knowing the way the characters move and what they excel in can make all the difference in the world. 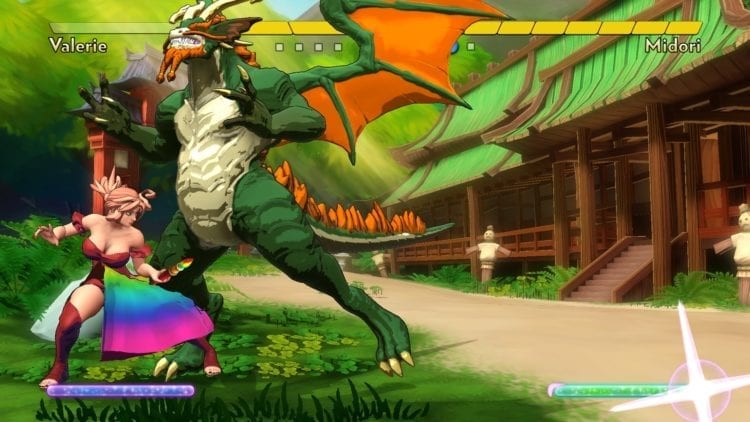 Fantasy Strike deals with rounds differently as well. Due to how quickly rounds are decided, ranked matches have three instead of two and casual matches have four. This is a great way to give players a chance and not have one-time mistakes or flukes lead to a definite loss. Make no mistake, the game is purely skill-based, as every good fighter game is.

Fantasy Strike doesn’t have much in the way of modes for now. The Steam store page says that more substantial single-player content will be available at launch, but that hasn’t been made available, so I’m not sure what that is. Currently, each character has a story mode bookended by story sequences brought to life via lovely artwork and voice acting. Each story mode contains six fights and ends with the requisite, obnoxiously cheap final boss battle.

There is also a survival mode that’s exactly what it sounds like. You fight AI-controlled fighters and see how many you can take out before losing. There’s a regular and daily mode you can try for anyone who wants to chase leaderboards. Naturally, there’s also a standard practice mode. I was a bit disappointed to see that each character doesn’t have an in-depth interactive tutorial that breaks down all their moves and what they’re used for.

On the online side, which is what’s truly important, you have casual, ranked, and friend matches. Casual matches offer a choice between searching for players near your skill level or anyone at all. Ranked matches are based around your rank. You start off being a bronze and can only fight other bronze players until you get to silver. While bronze, the game will pit you against the AI to rank up if there aren’t any other bronze players available. Otherwise, ranking up would be really difficult for newbies. 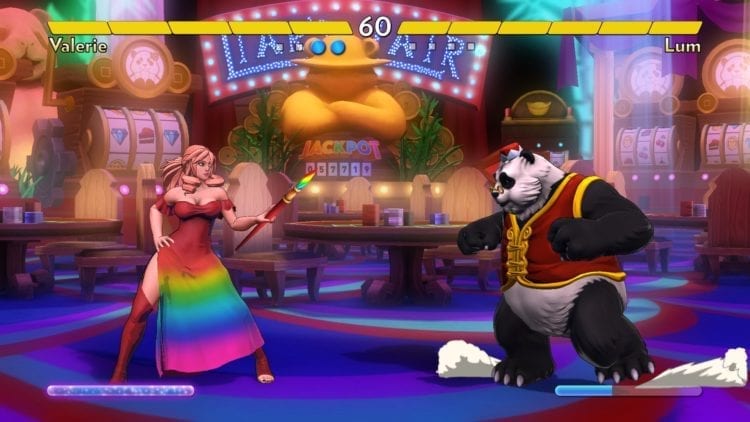 The way Fantasy Strike handles ranked matches is neat, too. Before searching for a match, you have to choose three characters, and they’ll be randomly shuffled against the three your opponent picked. Since it operates on a first-to-three system, matches can last for five rounds. When one player wins, they’re entered into a tournament bracket. Winning three matches in a row will rank you up faster.

Unfortunately, I went from bronze to silver without seeing a single other person playing ranked. All the times I’ve searched ranked games, I only ever got to play against a single other player. Of course, they were over 50 levels higher than me and quickly beat me into the dirt. While the game prides itself on being more accessible, that in no way means you’ll be able to jump online and find even matches all the time. And that’s if you can find other players at all. In the hours I spent with Fantasy Strike, I didn’t see more than a handful of people playing online, which is a shame as the game is great.

Visually, the game isn’t going to wow anyone. The visuals and aesthetics are mostly bland and have a Westerner-making-anime vibe. The stages are colorful but not particularly memorable and the art style is just really typical. Thankfully, this doesn’t affect the fighting, so this won’t matter to many players.

Fantasy Strike is an extremely good fighter that I enjoy playing when I can find someone to fight against. It has a lot of unique attributes that set it apart from other fighting games. It’s a really easy game to recommend to anyone that loves fighters, as its mechanics and gameplay are top-notch. The only big issue is the player base, which will hopefully increase with the game coming out of Early Access.

Fantasy Strike is an excellent fighting game with rewarding gameplay. I can only hope the amount of players increases.