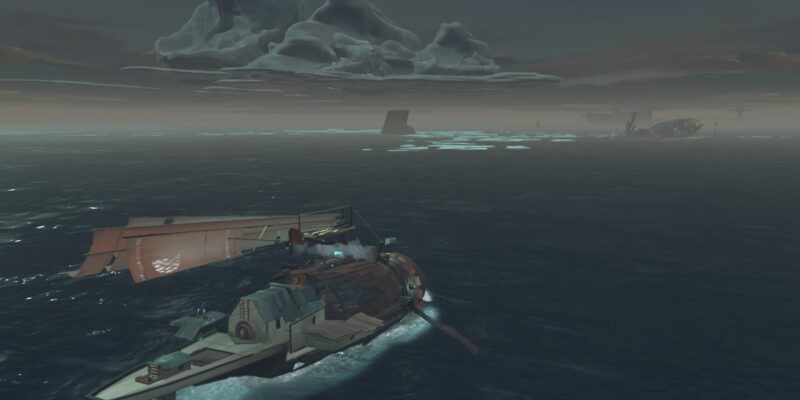 The big change between the two games revolves around how you traverse the environment. Lone Sails saw you on a solo adventure while piloting a massive ground vehicle. You needed to keep the metal beast running, completing environmental puzzles to continue on the journey. FAR: Changing Tides, however, puts you out on a large ship traversing the ocean.

Some gameplay elements remain the same. Like the vehicle before it, the ship is a clunky monstrosity that requires plenty of TLC to keep it chugging along. There will still be light puzzles to solve, and a world of mystery to uncover. However, as you’re sailing on water, getting off the ship to explore takes a different approach. You can explore the underwater ruins of a sunken civilization, for starters. And you don’t even have to be as gruff as Kevin Costner to pull it off.

A relaxing journey on the open ocean

One thing between the two games remains the same: the meditative experience. There will no doubt be some anxiety, but FAR: Changing Tides isn’t going to make you sweat too much. Okomotive is promising a more calming venture, and even released an hour-long ‘Soundwaves’ video featuring the game’s music and audio. I listened to some of it while writing this article and, yeah, it’s pretty chill. With the world the way it is, I think we can also use a bit more chill. Hell, even the creative team seems to think so, calling its first Soundwaves video something for people “to relax and help ease into 2022.”

FAR: Changing Tides has a release date for March 1. It’ll arrive on Steam, the Epic Games Store, and the Windows Store (yes, that means it’s heading to PC Game Pass).

Hitman 3’s Year 2 content will be revealed on Thursday

Destiny 2 expansion The Witch Queen gets new trailer and details