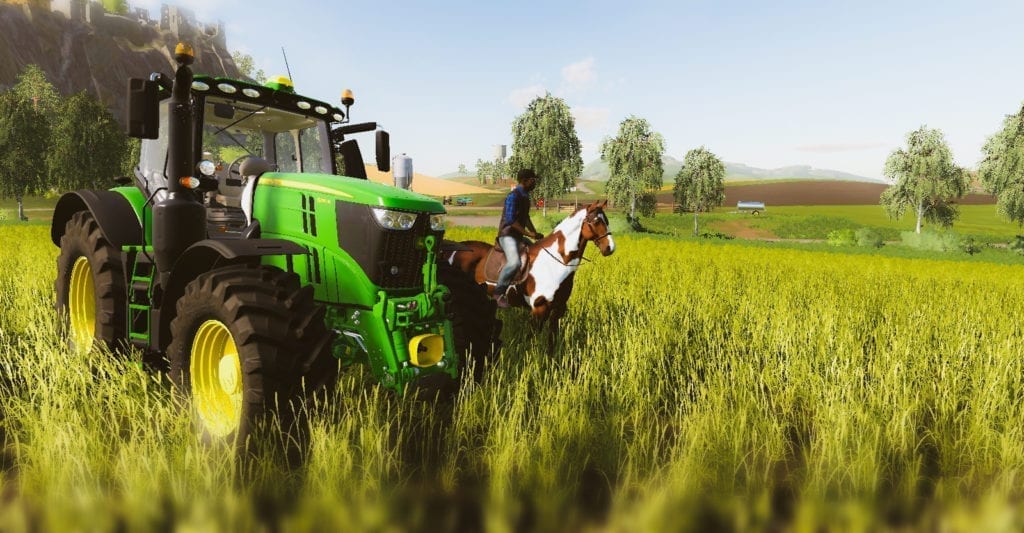 Back in 2016 when I got my first gaming laptop, Farming Simulator 17 was one of the first titles I purchased on Steam. I’ve been a fan of the series ever since. At this point, I’ve put over 140 hours into the PC version and over 20 into the Switch edition. Thus, I’ve been anticipating the release of its successor, Farming Simulator 19. Now, after playing FS19 for nearly two dozen hours, I must say—this isn’t quite what I expected.

Farming Simulator 19 naturally prides itself on being the big new entry in the now decade-old franchise. In some ways, it is an improvement. But, that’s just the thing—only in some ways is it a step up. For the most part, this feels like a modest update rather than a huge overhaul to its predecessor.

For one thing, the driving mechanics are still pretty hit and miss. A new physics system has been put into place that causes machinery to bounce and bob more realistically as they plod along through the rough terrain of the fields. This is a nice addition, but the improvements to the driving mechanics basically end there. Steering still feels pretty twitchy when using a gamepad. This isn’t too much of an issue when working on the fields as the vehicles all move very slowly. But, once you get up to speed in a tractor and especially a truck, things can get messy. The faster vehicles basically turn into Hot Wheels cars once they get over 35MPH, as they’re able to slip, slide and flip over way too easily. This was an issue that annoyed me in FS17, and I can’t help but continue to be annoyed that it’s still present two years later here in FS19. With other, more refined driving simulators like Spintires and American/Euro Truck Simulator 2 out in the wild, it’s hard to ignore FS19’s simpler driving mechanics. 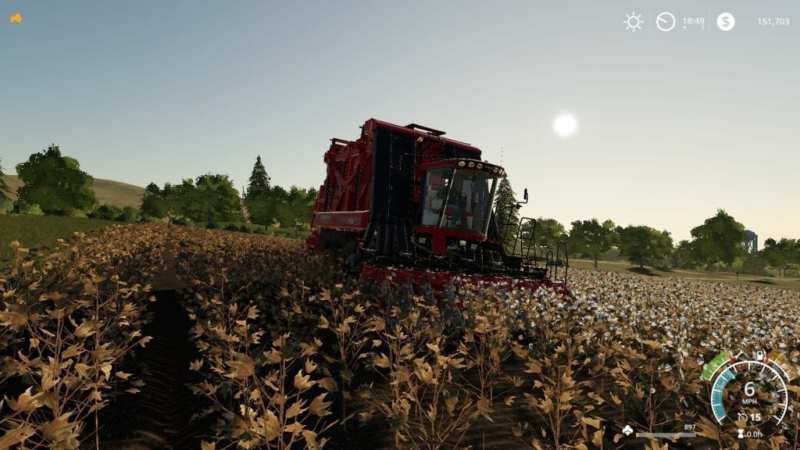 Cotton is an interesting new crop, but it requires a significant initial investment.

As for all the new farming elements, it’s at least been interesting to try them all out. There are two new crops: cotton and oats. While they may plaster the boxart, neither of which were very compelling to me. Cotton requires a special harvester that’s incredibly expensive, even to lease. So, I only ended up experiencing it via a contract job, which I’ll discuss further soon. It’s selling price isn’t too bad, but the initial investment might drive away more budget-conscious players. Oats is far simpler, functioning just like the returning wheat and barley crops. But, it’s market value is very low, so I didn’t plant it much. It does have an alternate use, however: it’s food for the new horses.

Yes, horse-riding is in Farming Simulator 19, and it’s not half bad. The animations are pretty smooth and these stallions can get up to a decent speed. The two new beautiful maps, Ravensport and Felsbrunn, are begging to be explored, and doing it via horseback is more tranquil than just driving. Taking care of the horses is also fairly straightforward, as they function just like the other animals. The only real issue I had was that their stable takes up a lot of room. Thus, now’s a good time to talk about the new land management system.

Like in past entries, you can choose to start a new game with a farm already set up with basic machinery and tools, along with a few fields. But, Farming Simulator 19 also introduces two new starting options: ‘Farm Manager’ and ‘Start from Scratch’. Both function the same way, but the key difference is that Farm Manager gives you a larger amount of cash to begin with. Both these modes offer a ‘clean slate’ approach, as you own nothing in the beginning. Now, in FS19, you don’t just buy fields, but entire plots of land. The size of the land you own determines what can be built on it, like animal pens and farm buildings. It’s a neat new system and thus allows for more creativity and freedom. 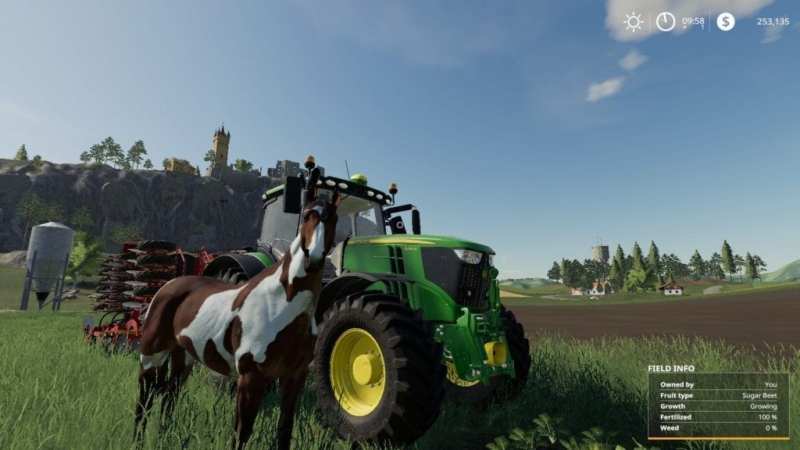 Horses are a fun new addition, although building their pen can be challenge depending on how much land you own.

If You Want It, Work for It

Speaking of freedom, I mentioned contract jobs earlier. This has been in past entries, but this mechanic has also been refined. Before, contracts behaved like a time trial mode, thus forcing you to finish the job right then and there. Now, however, you can complete the work whenever you like. This allowed me to simultaneously have the AI workers get stuff done on my own farm while I made some extra cash from tasks from the other farmers. Another change to this mechanic is that you now have the option to use your own machinery. You can still choose to use the machinery of the farmer that’s hiring you, though this will result in a smaller reward.

Farming Simulator 19 also introduces new field management mechanics. Crop destruction is now present, so you can’t roll through your fields once your crops start growing. Weeds will now also invade fields and must be rooted out with a weeder when they’re young. If you leave them for too long, they’ll sap nutrients from your crops thus resulting in less crop yield and a longer growth period. Though, mature weeds can be killed with herbicide, so you still have an opportunity to save a bit of your yield. Fields must also now be regularly sprayed with lime. Basically, this regulates the pH balance of the soil and thus improves yield. But, I noticed that the sprayer runs through its supply of lime much faster than fertilizer or even manure. So, spraying lime quickly becomes an annoying expense. All of these new mini challenges do add to the realism, but some players may find them irritating. Thankfully, they can all be disabled. 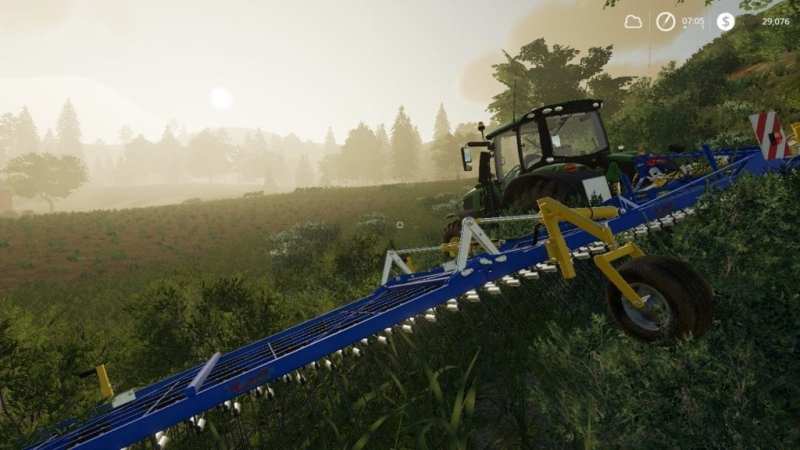 Weeding, crop destruction and lime spraying are all realistic additions, although also annoying. Thankfully, it’s your choice to keep them activated or not.

What cannot be disabled is the new vehicle maintenance system. As time passes, your machinery and even some tools like harvester headers will wear down, thus causing a reduction in performance. Machine health is indicated next to the speedometer, and the health of implements can be seen visually. For instance, the header for my harvester gradually had paint stripped away the more I used it. I legitimately like this feature, even if it does add to the list of expenses. From what I’ve observed, repair costs aren’t too high. So, as long as you take your tools to the shop regularly, you’ll be fine.

FS19’s new graphics engine does legitimately look nice. Sunlight and headlights now realistically interact with the world and materials. Shadows are cast all over, and metallic objects will emit a realistic shine and reflection. It all looks rather beautiful, and I particularly enjoyed watching the world around me glow at sunrise. The sky has also been revamped with moving clouds rather than just a simple flat skybox. Physics has also been applied to plants, so they now realistically bend when touched. The grass even turns into a lighter color when rolled on.

These little visual details are complemented by the nice design of the new Ravensport and Felsbrunn map. They look far more lively than past maps in the franchise. The developers showed a big improvement in scenery design with the Estancia Lapacho map from the FS17 Premium Expansion, and now they’ve pushed it even further. But, despite all these new little mechanics and visual improvements, I can’t say I’m completely pleased with FS19.

While I like all of the new stuff, it wasn’t enough to distract me from the flaws. Framerate stutters are still aplenty, and the LOD system is still woefully basic. The presentation of some textures like the way grain is poured and sprayed onto a field still seems too fake. Add this to the aforementioned wonky driving mechanics, and all of this ultimately amounts to what feels like Farming Simulator 17: Deluxe. I’m sorry, but not even the inclusion of John Deere is enough to make me feel otherwise. This is a step in the right direction, yes, but more needs to be done. Giants Software should not keep sitting on its laurels just because it has the biggest franchise in the genre. Really, as the biggest franchise, it should be striving the most to push the genre further. 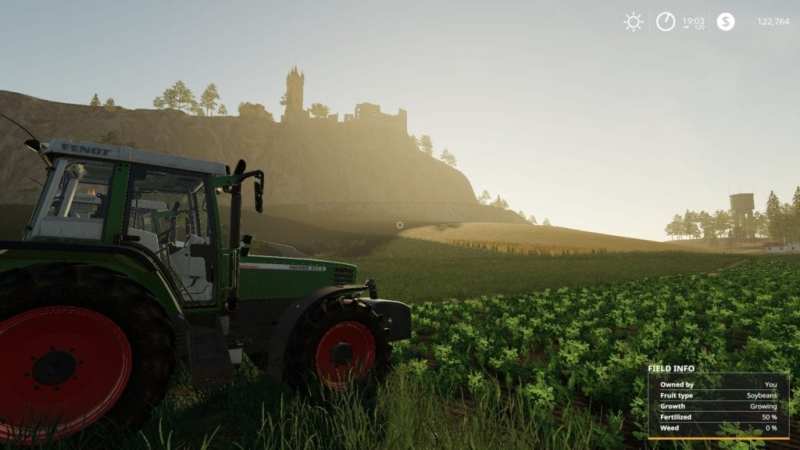 All the new little details and minor gameplay tweaks are nice, but this series needs a overhaul if it’s ever going to truly move forward.

If you’ve played FS17 to death, then you’ll probably enjoy FS19 nonetheless. But, just go in knowing that if you had any qualms with 17, the majority of them will now resurface. If you’re a series newcomer, I would recommend this despite its issues, since it is still at least a decent sim. Though, I’d also consider taking a look at Pure Farming 2018, as it does put on a stronger show in some areas. But, looking at the Farming Simulator franchise as a whole, I don’t want Giants to take a one-step approach next time. Whenever the next release comes, I hope it’s a genuine leap forward.

Farming Simulator 19's new features do push the series in the right direction, but more needs to be done next time around. The old flaws have to be rooted out so a truly fresh new experience can grow.