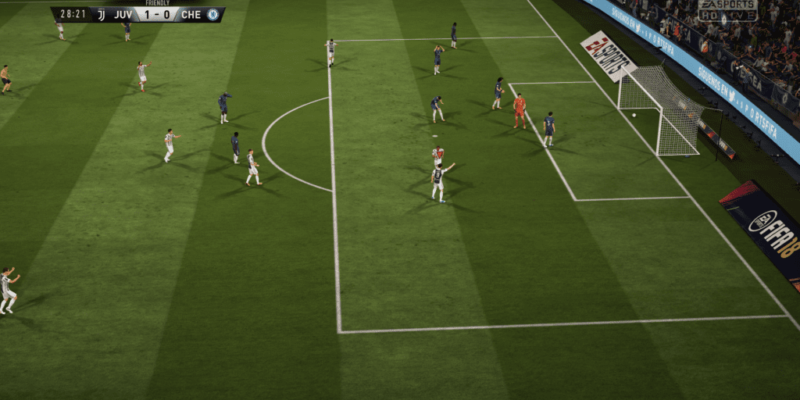 It’s mid-September, so that sound you hear on the horizon is a whole bunch of virtual players kicking some fresh virtual balls in FIFA 18. But how fresh are these balls, really? Have EA Sports applied enough new feature powder to keep the stinging sweat of stagnation away, and can I please move away from this metaphor?

They’ve seemed a bit less forceful about touting their new additions this year. Career mode is getting a sort of cinematic transfer negotiation sequence where you sit awkwardly in a room with a rival manager and hash out a deal (I can’t wait to see how that plays out in League One with generic faces everywhere). Dribbling is supposedly more responsive this time, and there’s some big talk about ‘team tactics’ that will supposedly make the AI sides play slightly differently from one another for once.

The usual incremental changes around the edges, then, that you’d expect from an annual series based on a game that already has very set rules. 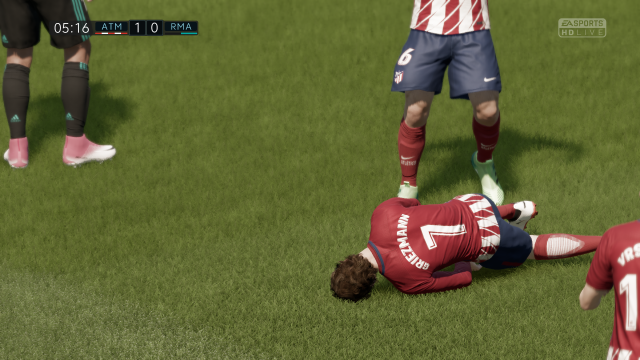 Rule #1: Do the Dead Fish celebration at all times.

As always, the FIFA 18 demo is an older build than what will emerge as the full game. In fact, I believe there’s a closed beta ongoing right now; that’s very likely to be a more up to date version than the demo. For the past couple of years I’ve enjoyed the demo more than the eventual release. Although that’s possibly more to do with the smell of new balls wearing off after a lengthier spell of play than any massive quality difference between the demo and final version.

Let’s address some technical PC stuff first. The launcher settings are the same as FIFA 17’s (Resolution, Rendering Quality, MSAA, and Frame-rate Limiter), plus one new addition: you can choose to launch in DirectX 11 or DirectX 12 mode (or shrug and opt for ‘auto’). I mostly played with DX11, purely because it allowed me to use ‘injectors’ like FRAPS and RivaTuner to keep an eye on frame-rates and take screencaps.

System specs for FIFA 18 are, far as I can tell, identical to those for FIFA 17. At least in DX11 mode. DX12, rather obviously, requires a GPU that supports it. My own machine (i5-6600/16GB RAM/R9 380X), using the highest settings and the uncapped frame-rate option, was merrily running games at over 200fps at 1080p. If you have anything resembling a gaming PC, it’s not an especially demanding game. 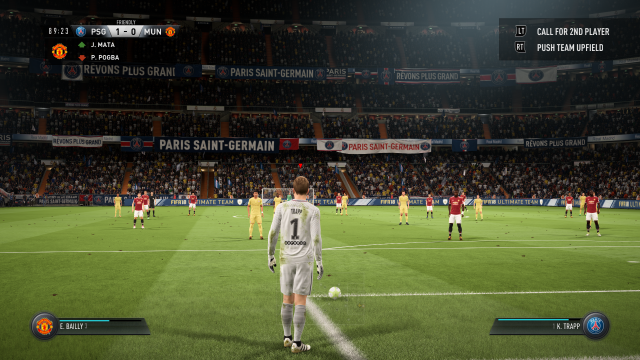 To see this part above 30fps, you’ll have to jump through hoops again.

The slightly annoying news is that FIFA 18’s menus, goal kicks, free kicks, and cinematic replay shots look like they’re all going to be locked at 30fps by default, as they were in FIFA 17. Even if you set the frame-rate to ‘unlimited’. Setting the frame-rate to 60 in AMD’s Crimson software doesn’t prevent it, nor does using RTSS to keep the frame-rate at 60. I’ve not dug out RadeonPro yet, but that might once again be the only workaround for AMD, just as it was last year. I can’t speak for Nvidia users, but they can probably deploy whatever workaround they used last year too.

Besides that persistent irritation, FIFA 18 looks like another pretty robust port. 4K support is in, as is the ability to play at 144hz (assuming you can get around those 30fps caps on certain things). It’s using the Frostbite Engine again, and some of the lighting seems to have benefitted from a year away. Only some though. Other parts, like inside Athletico Madrid’s stadium, appear to be positioned directly next to the sun.

This is going to end with a really nasty sun burn.

Mechanically, let’s check off a couple of things that are the same. Free kicks and corners use the same system as FIFA 17. Penalties are practically the same. You can still run up faster with the right trigger, but the left trigger is now a slower run up rather than a fake stumble. The general ‘feel’ and ‘flow’ of the game (a bit nebulous, I know) is not a million miles away from the last one. There are definitely some noticeable differences, though.

Close or slow dribbling is back, and back on the left should button by default. That’s only technically a difference because it went away for a bit, but it’s nice to have back in a familiar place. Not entirely convinced it’s dramatically more ‘responsive’ just yet.

Crosses in the FIFA 18 demo seem almost ungodly powerful, able to find a striker or onrushing midfielder in a useful position nine times out of ten (this is on both Pro and World Class, using semi-assisted). I have a vague memory about crosses being very strong in the FIFA 17 demo too, but that turned out not really to be the case in the full game. Who knows what will happen this time.

Defending feels quite a bit harder too. You can’t just leave the AI to it, or stand near someone and mash Standing Tackle (well, okay, that still works a bit). The defenders in this demo seem a bit lumbering, able to be turned quite easily if you commit them to a mistimed tackle. Honestly, I think I’d like that to stick around for the full game. Forcing people to learn some timing and positional sense is fine by me. 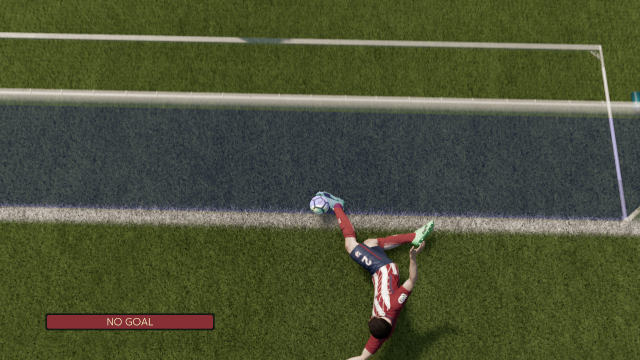 Leaving it a bit late, but hey.

The Standing Tackle is currently a bit odd in FIFA 18, though. It seems like you can almost ‘charge’ it up. Either that, or it just feels like it takes about five seconds to actually come out.

As for whether the AI teams play in more distinct ways now, well, hmm. I’m not sure if this is just a placebo effect at work, but it did feel like Mourinho’s Manchester United and the Athletico side were playing a more aggressive pressing style than, say, Real Madrid. They, meanwhile, were getting a lot of joy from finding Gareth Bale in space on my wings. Conversely, Ronaldo was unusually anonymous.

Since I’ve only played the demo for a few hours this afternoon, I’m not going to fully commit to those observations. I’ll instead say that the AI teams (again, on Pro/World Class) seemed to exhibit a couple of unique properties. Maybe. A bit.

Quick substitutes are a small, but genuinely welcome addition. Before a match you can set up to three pre-selected replacements, and bring them on during stoppages without too much faffing with menus. Replays have a fancy new addition as well. They show directional arrows, as demonstrated in this fine piece of goalkeeping by Buffon.

Besides the usual Kick Off mode friendlies, the rest of the demo is dedicated to the continuing adventures of Alex Huntaaaahhhh. Here’s how that goes.

Excitable Agent Man: Alex! Great news! Real Madrid want to sign you.
Alex H: This is great news. I am pleased.
Grandpa Breakfast: Think about it carefully Alex, you’ll probably just be sat on the bench. Also, would you like some eggs?
Alex H: No thanks Grandpa. I’m going to ignore you and sign for Real Madrid as soon as I can!

Generic Coach Who Stands In For The Actual Managers Because Their Voice Acting Would Cost Too Much: Alex, you’re on the bench because of all this transfer speculation. Oh, and our fans hate you now.
Fans: Boooo, Alex. Boooo.
Alex H: Well that sucks.

Excitable Agent Man: Alex, I may have made a slight miscalculation.
Alex H: How so?
Now Quite Ashamed Agent Man: Well, in the sense that the agent I was negotiating with was a total fraud and Real Madrid don’t care about you at all.
Alex H: You motherfu-

Cracking stuff, in other words. I can’t wait to spend 70% of my time doing FIFA 18’s rubbish training exercises between games all over again. 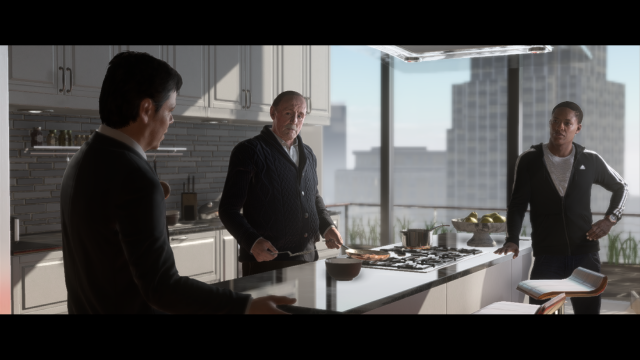 Grandpa Breakfast is going to murder that guy.

FIFA 18 is going to be another entry where in the broad sense it’s not a massive step forward from 17. But try going back just a couple of years to earlier entries like 15, and see how difficult it is to live without some of the smaller things introduced over time. If this demo is indicative of the final version, defending, crossing, and the reintroduction of close dribbling will be points of debate with pro and anti camps this year. Any kind of consensus on those things is, obviously, still to come.

The stated attempts to give AI teams actual tactical personalities would actually be a fundamental change for FIFA 18 to make, and one I’ve wanted for a long time. Based on the demo I’m not entirely convinced yet, but even a part-implementation of that goal would be progress. Would be nice if they could code the PC version to accept 60fps menus by default when you select that as the frame-rate too, though aside from that it’s another well-constructed port.