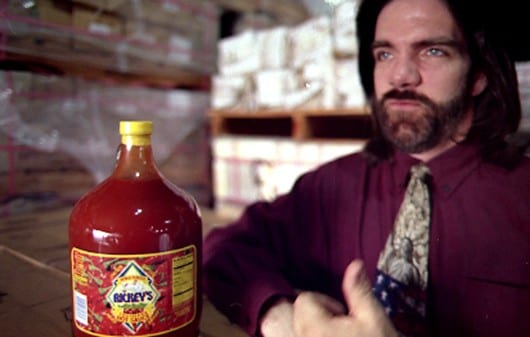 Films That Every Gamer Should See Before They Die

by Andrew Rainnie, director of the film, The Collector

Films and games. They are like oil and water, rarely mixing with any great success. Game adaptations into film have mainly been poor, while movie tie-in games tend to be little more than quick cash ins (Activision, I am looking squarely at you). But yet there is much that one can learn from the other, films that share qualities with games in their themes or actual story, that make them worthy viewing when a gamer wants to give his button bashing thumbs a rest.

The cult classic was directed by Steven Lisberger, who was inspired to make the film after playing Pong. It was originally conceived as an animated film, but after being turned away from numerous studios, was set up at Disney as a mix of live-action and computer generated animation. Features sets and costumes by Peter Giraud, the French comic artist also known as Moebius, and vehicle designs by Syd Mead, famous for those in Ridley Scott’s Alien and Blade Runner films. But it was the concept of a conscious AI, the Master Control Program, transporting a human being into a digital world, which captured the imaginations of audiences worldwide.

A product of its time, it was along with Tron one of the first films to heavily use computer generated graphics. But whereas Tron was set inside a video game program, here the video game is used only as an inciting device. The teenage protagonist, Alex Rogan, defeats the high score of his local arcade game, Starfighter, which is in fact a training simulator to find the best pilots in the galaxy, a plot which exciting the imagination of young would-be space pilots everywhere, especially only a year after the conclusion to the Star Wars trilogy.

Almost twenty years after Tron, the Wachowski Brothers trapped audiences inside The Matrix. While sharing many similarities with Tron’s storyline – sentient computer programs, trapped humans – the one difference is that initially, the world of the Matrix is almost indisguinshable from the real world, both to the characters in the film and the audience themselves. Whereas Tron was set during the birth of home video games, The Matrix launched just before the turn of the century, when videogames were now common place, and gamers could perhaps identify more readily with the loner of Thomas Anderson, lost in a virtual reality prison. Rather than a quest through a computer animated world, The Matrix forced its audience to think about the reality of their world, managing to ask deep philosophical question in between the wire-fighting and revolutionary bullet time special effects. These ideas were becoming more popular; David Cronenberg’s similarly themed Existenz was released the same year, and Chris Nolan’s Inception a decade later explored these further. But without The Matrix we may never have seen the rise of Assassin’s Creed.

THE KING OF KONG: A FISTFUL OF QUARTERS

A documentary charting die hard video gamers attempting to beat the World Records of the arcade classic Donkey Kong, offering a fascinating insight into the often addictive quality of games, or rather, the need to beat the game and rival players.

Or to give it the much better German title, Joy Stick Heroes. Starring The Wonder Years’ Fred Savage and Christian Slater, the film was famous for being the public unveiling of Super Mario Bros 3. Nintendo games feature heavily throughout the film, with arcade scenes sporting the Nintendo Pay Choice Ten cabinet, which allowed players to play ten NES games in their local arcade. However, the highlight of the game is a duel against antagonist Lucas Barton, who famously states. “I love the Power Glove. It’s so bad.” While licensed by Nintendo, it was made by Mattel, and was poorly received.

Horse around in Call of Duty: Black Ops 2 [Video]

By Michael Feghali28 mins ago
News