Oh boy. If the rest of Shadowbringers‘ initial slew of Eden raids were fairly easy, Sepulture is the one that’s going to result in a few dozen wipes with any given pick-up group.

With current gear levels, the Titan battle is an incredibly lengthy boss fight, and it’s one with a whole slew of mechanics that can one-shot the unprepared. Combine “length” and “one-hit kills,” and most of the party is going to die at least once in a successful run.

First, bear in mind that you can walk off the edge of the arena (or be pushed off it, which is far more likely in your first few attempts). Second, remember that nearly every attack is a marked AoE of some sort; almost everything is avoidable. Third, the battle plays a lot on the “grid” nature of the arena (4×4 tiles, I think) which is actually more helpful than you’d think. I have learned to dread this screen in the Duty Roulette.

If you’re impatient, here’s a condensed list of the stuff it’s most important to remember. First, don’t fall off the edge. Yes, again.

Stand in front of Titan for Massive Landslide, then move to the side. Stand to his side for Go-Kart, then wait for the first line of tiles to explode and move onto them. Hide behind the non-glowing rock for Seismic Wave, and get ready to move underneath him after he does Go-Kart a few times in quick succession. Keep track of the order Bomb Boulders drop in so you can move to a safe spot without much hassle.

For the rest, you really just need to keep an eye out for the AoE markers (most of which expand) and then step onto safe zones when the opportunity arises. This was a successful run. At one point, five party members were dead at the same time.

I’m not going to go over literally everything Titan does, but there are plenty of abilities you should watch out for. Here’s what they are and how to deal with them.

Stonecrusher – A tankbuster which applies a stack of vulnerability. Depending on gear and healers, you may want to tank swap after every Stonecrusher. Note that this cleaves: make sure the party isn’t standing in front of Titan when he does this.

Evil Earth – One arena tile will be marked with an AoE marker, with arrows pointing outwards. The AoE marker will then expand outwards to the adjacent tiles, before the initial tile is hit. This repeats. Effectively: stand next to one of the tiles that’s about to explode, and then move onto it before the tile you’re on erupts. Honestly, you can just stand next to the initial Evil Earth tile, wait for it to blow up, and then move onto it to easily avoid this.

Geocrush – A massive wave of arrows will radiate out from one square. After a few seconds, Titan will leap to this square and players will be pushed back from it. You want to run as close as you can to this square with as much of the arena behind you as possible so you’re not sent flying off. Not the best screenshot, but you can see the grid layout of the arena and the spreading Geocrush. After the tile with the arrows in it explodes, the next set of tiles along will get a red AoE marker, and so on.

Crumbling Down/Seismic Wave – Two proximity AoE markers will appear on opposite sides of the arena. Get as far away from them as you can. As an example, if they appear on, say, the west and east sides of the arena, get to the middle of the north or south to avoid most of the damage when giant rocks fall on those spots.

One of those rocks will grow and start glowing, ready to explode, and Titan will begin casting Seismic Wave. Seismic Wave will hit the entire arena except for the area behind the rock that isn’t glowing. Get over to the un-glowing rock and make sure it’s between you and Titan to avoid the damage.

Bomb Boulders/Cobalt Bomb – This should be pretty familiar from any of the other Titan fights, really. Boulders will drop on the arena and explode after a set period of time. The difference here is that Titan will tether himself to one of them, which will grow massively, vastly increasing the AoE of that boulder. This basically means there are no safe spaces near that one.

There are a few patterns for this – the first cast will put rocks in a 2×2 grid which can be avoided by standing on the edge of the arena between two of the non-tethered ones. Later, he’ll switch this up to dropping one row, then a second row, then a third row; they’ll explode in the order they were placed, so hide near the last ones to drop and then move once they blow. If memory serves, there’s also a cross-shaped one that he’ll use later.

Earthen Fury – This can’t be avoided, but it’s worth mentioning because it’ll apply the Filthy DoT status to the entire party. If you’ve got any self-healing stuff like Bloodbath, pop it after this hits to make your healers’ lives easier. 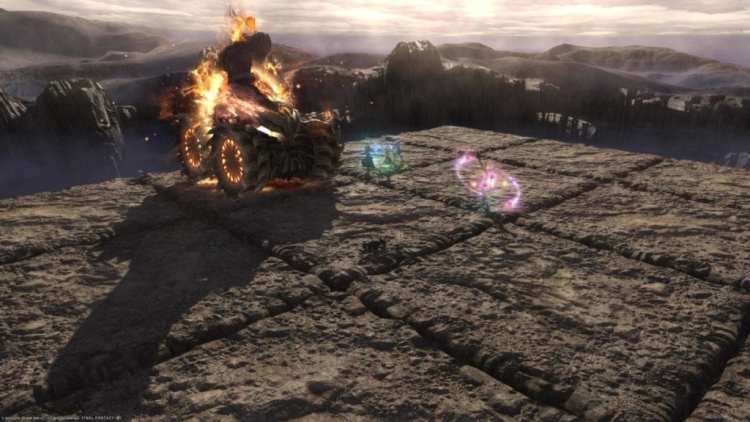 No, really. He turns into a go-kart driver. Stand on the side where you have two tiles of space.

Fault Zone/Titan Kart 64 – Apparently, Titan is secretly trying to get into the next Mario Kart game, and Eden is where you discover this. Fault Zone is the opposite of Landslide, insofar as Titan will hit the tiles directly in front of him. You want to stand next to him, on the side which has more tiles between him and the edge of the arena. Standing in front of him will instantly send you off the arena. Standing to the side will knock you back around a tile and a half, so you need at least that much space between you and the edge. After this, the tiles to the side will erupt; keep an eye out for the blue glow and move onto those tiles after the glow fades and the AoE hits. (Thankfully, he hasn’t learned how to drift yet.)

Magnitude 5.0 – Later in the fight, Go-Kart Titan wants to show off some of his cool tricks. After performing Fault Zone a few times, he’ll follow it up with Magnitude 5.0, a donut AoE which… has him doing a donut in his go-kart. The only safe space is directly underneath Titan, so you want to stack up under him as fast as you can. Any movement abilities are recommended: you do not have a lot of time.

His Other Stuff – If that wasn’t enough to keep track of, he’s got plenty of other abilities too. Most of these are pretty well-telegraphed – keep an eye out for glowing danger tiles and move off of them. There are also slightly nastier variants of Landslide and Fault Zone which we’ll cover in a moment.

“Dodge the AoEs” is easy to say, but harder to do in a fight like this. The two you really want to watch out for are Landslide and Fault Zone, because they will instantly kill you if you’re standing in the wrong spot – and that spot is not telegraphed. 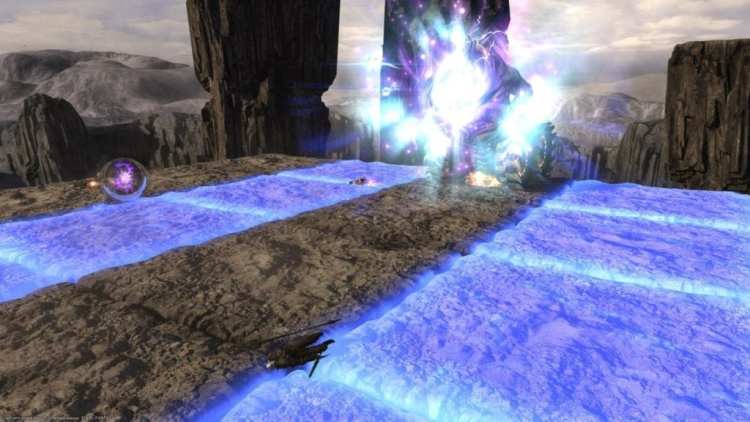 You’ll die your first few attempts (and possibly on successful ones), but it’ll give you a chance to see the rest of his attacks for yourself. Don’t get discouraged.

Towards the end of the fight, things get really messy as he starts using a bunch of these abilities together. Trying to find a safe spot to avoid Bomb Boulders while Evil Earth slowly spreads out, and random squares start glowing orange… It is a challenge.

Titan will also up the ante on Fault Zone and start doing more variants of Landslide. He’ll repeat Fault Zone/Go-Kart Mode a few times in a row, requiring players to dodge it and then effectively run across the arena to dodge it again. He’ll then follow this up with Magnitude 5.0.

Massive Landslide and Fault Zone/Go-Kart are the most common causes of half of the party going flying off the map, so don’t be that person. Remember where you need to stand for those. And while Titan’s attacks get harder to dodge near the end, there’s no hard enrage timer on the normal version of this fight. As such, there’s not much shame in playing it a little safer to make sure you don’t die.

That said, you’re inevitably going to die to this fight. It’s an order of magnitude harder than the rest of the Eden fights so far, and unless everyone else is on top form you’re probably going to wipe at least once. Just take it in stride, and you’ll topple Titan once more.

By Matt Henzel16 mins ago
Guides

By Cameron Woolsey32 mins ago
Guides