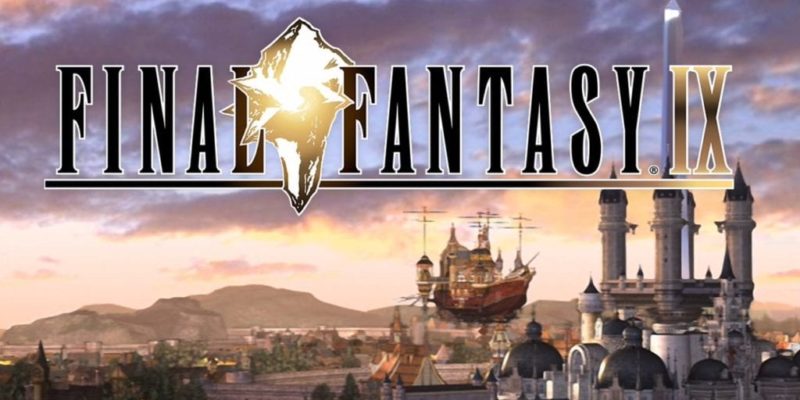 For the record, I’ve played for just over an hour. I spent way too long wandering Alexandria, I re-did the fight scene about fives times, I escaped the castle, I did some of the early battles… and that’s about it. As such, if the world map turns out to be a mass of impossible colour and noise that makes your monitor explode and causes your hard drive to become sentient and attempt to murder you, I can’t comment. (Although that would be a sufficient technical feat that I’d probably be quite impressed anyway.)

As is tradition, I’ll point out that pressing Escape does not instantly quit to the desktop. Well done, Square Enix. This is consistency I like to see. 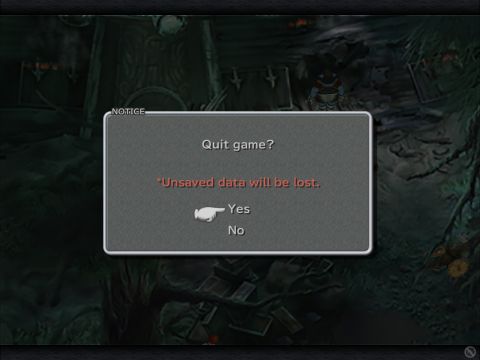 This is what happens when you press Alt-F4 or try to close the window. Escape is actually one of the several Cancel buttons.

First up, let’s look at the graphical options: 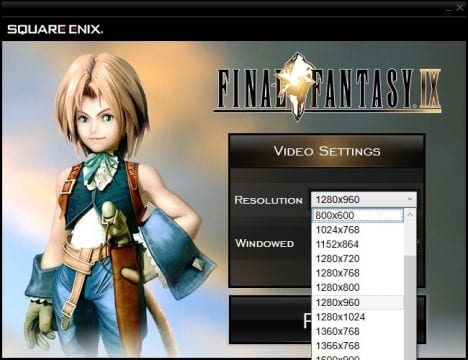 Apologies for the cropping. I blame Windows 10. And yes, that’s my new excuse for everything.

1920×1080 fullscreen doesn’t match that aspect ratio so it has borders at the side (and running it in fullscreen doesn’t do the ageing graphics many favours) but it seems to run just fine either way. I’m also very, very happy that the fullscreen option is actually Borderless Windowed, so Alt-Tabbing out works wonderfully. 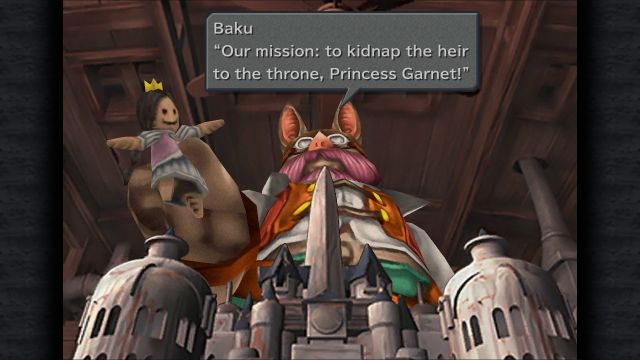 As represented here by a little dolly that a grown man with a pink beard should not be able to immediately pull out.

In terms of framerate, Final Fantasy IX runs at a mix of 30FPS and 15FPS, but I’m 90% sure that’s exactly the same as the PSX original so I’m not really going to complain. Every bit of gameplay is running at 30, while all cutscenes are at 15, and considering the cutscenes tend to make use of pre-rendered animations that’s hardly a surprise.

I will note that battles feel like they’re running slower than 30, but I think that’s just the combat animations; bits and pieces like the UI and the damage numbers are all silky smooth compared to the slightly choppy combat animations.

I repeat: I don’t have much of a problem with this. It “feels” pretty much identical to the original, rather than being a crappy alternate version of it.

Graphically, it’s actually held up rather well. The backgrounds are pretty blurry at any sort of high-resolution as they’re all pre-rendered images, but the character models are surprisingly gorgeous. I’d guess the textures have been redone at a higher resolution, though it may simply be that things look awfully sharp on something that isn’t a PSX on a CRT TV. Either way, I’m really happy with how most of it looks: the cutscenes are higher-res than expected and still look lovely thanks to their stylised nature, and the character models and textures have a slightly exaggerated, cartoony look that works rather well even now. 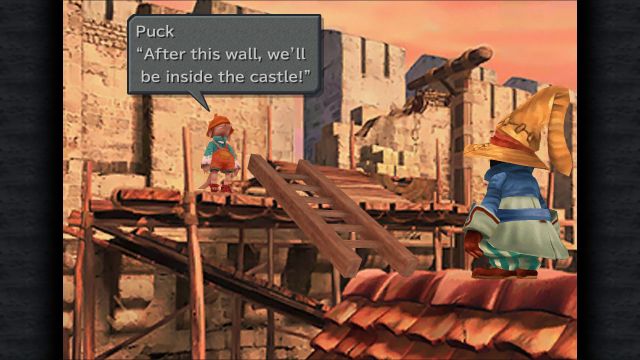 The backgrounds don’t look great zoomed-in, as you’ll see if you Click For Bigger, but the models are still lovely.

The third part of the port trifecta is the controls, and this is where I’m actually really impressed.

First: yes, there are gamepad controls, which I didn’t even attempt because I’m foolish enough to assume they’re going to be fine.

Second: yes, there are keyboard controls, and they’re fine. They’re largely redefinable, and Final Fantasy IX actually displays keys rather than the equivalent console buttons in prompts. Some keys can’t be redefined – movement appears to be always bound to WASD and the arrow keys, so you can’t rework the controls to use any of them – but you’ve got most of the rest of the keyboard to play with. No pun intended. 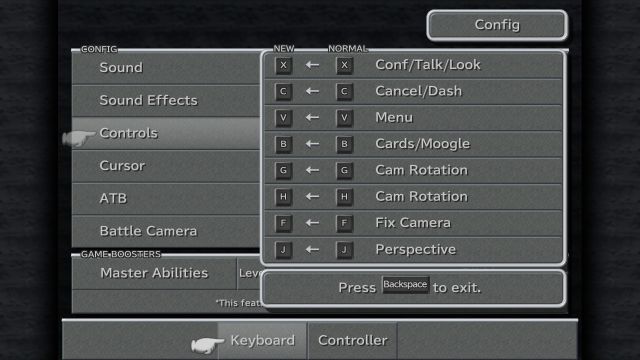 Also, unlike certain other recent Final Fantasy ports, I haven’t had much of an issue with the controls in combat. The UI is quite large, but not so large it gets in the way, and it’s not even remotely finicky to navigate on the keyboard. 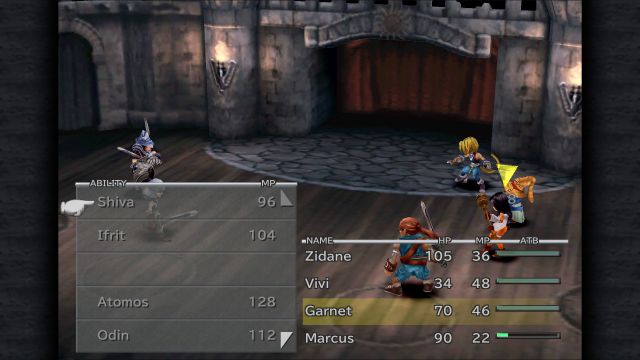 Garnet won’t be using any of these summons for awhile.

Third: there are mouse controls. I’ll wait a moment while you re-read that sentence.

Yeah, there are mouse controls. Other than all of the menus supporting mouse input, you can even use them in the general overworld. You can click, and your character will move in that direction. Move near to an NPC and a speech bubble (and card icon, if you can play Tetra Master with them) will appear above their head; you can think click on those icons to initiate conversation or cards.

Click near to your character, and they’ll walk slowly; click a distance away and they’ll run. You can even use the mousewheel to scroll through menus. I’m gobsmacked. 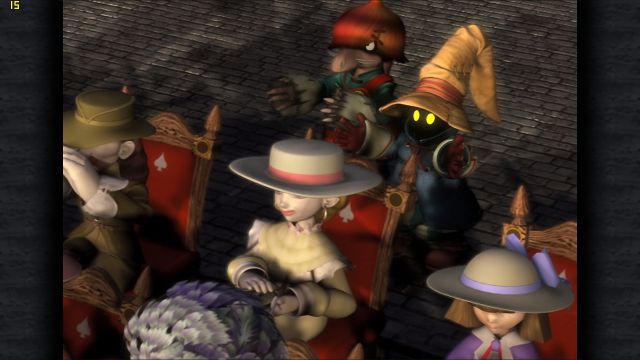 The cutscenes look rather nice. And you even get a bonus FRAPS framerate counter in the corner, too, you lucky devils.

It’s not necessarily the best method of controlling the game, mind you – getting next to a character to chat to them can be a bit finicky, and you’ll still need to use the keyboard for anything other than option selection and the Confirm/Cancel buttons, as I couldn’t find any way to access the menu via the mouse – but hell, it’s nice to have, and seems to work alright in battles.

In addition to all of this, you’ve also got a few extra bonuses like the ability to give yourself unlimited gold or skip random encounters and so on, so if you just want to get through the game or skip certain parts, you can. Huzzah!

In short, the port is… um. It’s actually pretty good. I think the port job was done by Silicon Studio Thailand (as their name pops up in the opening credits) though they may have simply had a hand in the creation of the port’s engine, as Silicon Studio have done quite a lot of work with Square Enix before. I’m unsure, but whoever’s responsible for this perfectly playable port deserves some plaudits. 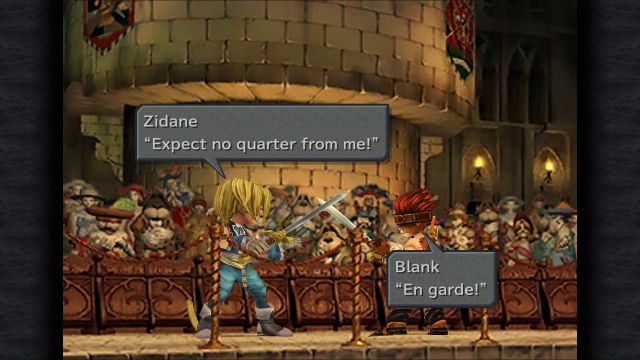 Even though it’s basically a quicktime event, the duel scene/mini-game is one of my favourite things about the start. Particularly because of the music.

Final Fantasy IX itself is a wonderful, wonderful game. It’s one of the last “classic” Final Fantasy games, insofar as it has random encounters and Active Time Battles and AP-based skill learning. It has a pseudo-fantasy setting (i.e. fantasy but with airships and some elements of steampunk tech), lots of weird and wonderful creatures, a rather knowing script, and utterly superb music. Characters were cartoony and light-hearted rather than realistic and brooding, and the world was bright, colourful, and imaginative rather than a dark sci-fi environment. Check the screenshots below and you’ll see Garnet disguising herself with a White Mage robe, for instance… and sure enough, she’s the party’s White Mage, even though she doesn’t wear it again. Swords from earlier games pop up on the walls of weapon shops. Etc.

That’s not to say it lacked seriousness or emotion – it’s actually got what I’d argue is one of the most tear-jerking scenes in the entire series – but it knew that you could actually mix these seemingly disparate elements together over the course of the adventure.

If I remember correctly, it was actually designed this way. This might be apocryphal, but Final Fantasy IX was the final Final Fantasy of the PSX era, and I remember it being described as kind of a love letter to the Final Fantasy titles of years past. It’s full of references to older games and is a bit of a return to those roots, especially after Final Fantasy VII and the spectacularly awful Final Fantasy VIII had started leaning towards more modern elements. 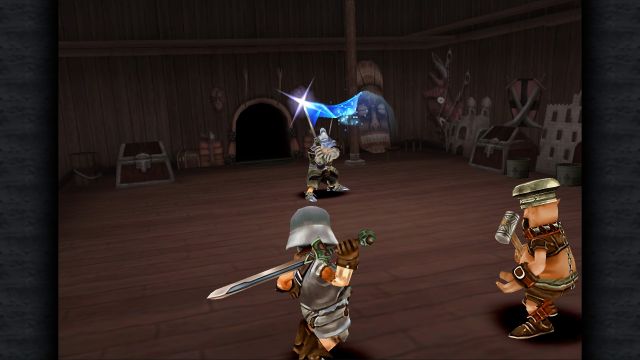 A few of the combat effects are actually really lovely, too. I mean, that’s a nice swooshy sword.

Final Fantasy IX is utterly charming, in a way that few Final Fantasy games have matched before or since. As with pretty much every game in the series, it’s got a few aneurysm-inducing dungeons and a few really rough spots (like Tetra Master, which is a rubbish version of Final Fantasy VIII‘s Triple Triad card game; I maintain that’s the only thing VIII did right) but for the most part is just a lovingly crafted experience that oozes joy.

It kicks off with a borderline farcical attempt to kidnap a princess (who wants to be kidnapped) involving a lavish play and a Benny Hill-esque chase around the castle, and takes awhile before it spans into the usual world-saving stuff. But for all of that, it never loses its desire to enchant.

Now, I’ll admit that I’m a little biased. Final Fantasy IX is a pretty important game to me in a lot of ways. 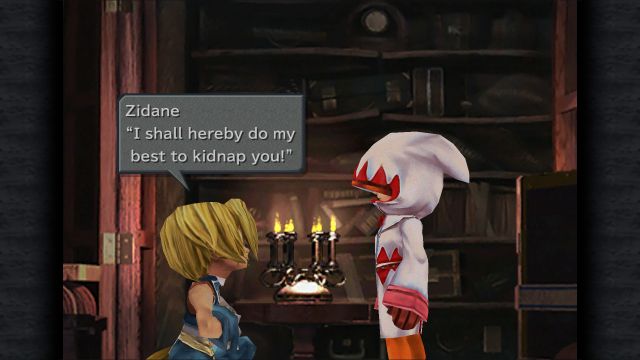 CHARMING. It’s so nice to have a protagonist who’s not a brooding emo, and even on the rare occasions he does get that way, it doesn’t last for long.

The day it was released was shortly after my home was flooded, and I was living in rented accommodation. My PlayStation memory card was destroyed in the flood and I didn’t notice this until I’d already got the game, so for the first night I was playing with absolutely no save files, making the early Black Waltz 1 boss fight a genuinely tense experience.

I was still in school when it was released, too, and for the next three months a friend and I annoyed our English Literature teacher by continually referencing that oh-so-famous play I Want To Be Your Canary (which definitely wasn’t made up just for Final Fantasy IX) in essays that were ostensibly about Shakespeare or Dickens. And then there was the time… but I digress.

I’m not going to lie and say that these are all pleasant memories – the flood certainly isn’t – but yeah, it’s a game that resonates with me in a lot of ways. 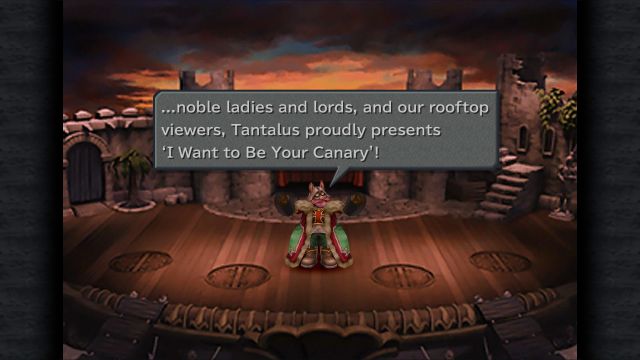 Totally a real play. Just read my essay about A Tale of Two Cities for evidence.

On the other hand, I haven’t actually played it since then, and I think I actually enjoyed the hour I spent with the port more than I enjoyed playing it back in 2001. I remember being a little annoyed by the start, disliking the characters that weren’t the adorable Black Mage Vivi, and finding a few of the early elements slow and tedious. This time around, I was just overwhelmed by its charm. Yes, okay, I’ve called it “charming” a few times, but that really does feel like the one word that perfectly captures Final Fantasy IX‘s atmosphere. Simply put, it’s a joy.

So: right now, I’m pleased with the port, and the game itself is one of the better “classic” Final Fantasy titles, to the extent that a lot of people reckon it stands alongside VI and VII as one of the best games of the series. This isn’t a review and there’s still a good 50 hours of play in which unexpected issues with the port could pop up, but based on the hour I’ve spent with it, I have no reservations about recommending it. It might not be a full remake or anything, but right now, this feels like the PC version this game deserves.