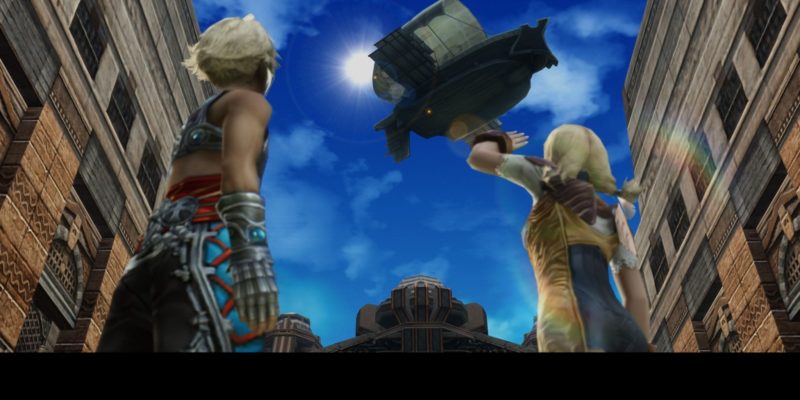 Today, in things that make me feel old: Final Fantasy XII came out in 2006. I can’t even remember what the hell I was doing in 2006, but I do remember this particular game consuming a few weeks of my life back then. It’s one of the more divisive Final Fantasy games, certainly – a more open world, combat with real-time movement, and a bit of an MMO feel to things – but if you missed it back then, you now have an opportunity to pick it up on the Best System.

And if you have any interest in it then you probably should, because The Zodiac Age – as the remaster is called – is really rather well-assembled on PC. Make no mistake: this is still definitely a remaster rather than a remake, and it looks like it, but some low-polygon characters and low-resolution texture work don’t stop its visual charm from shining through. 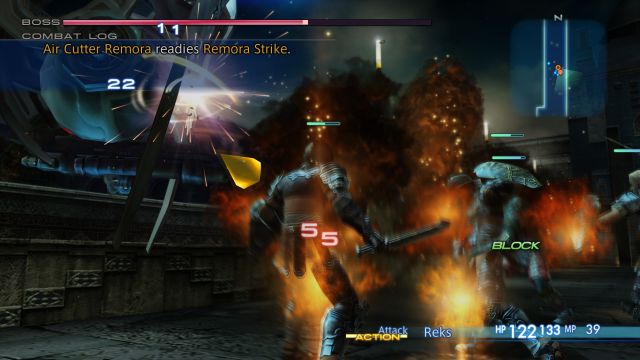 Although that might be tricky to tell from this screenshot.

Let’s rattle off a list of things that Final Fantasy XII: The Zodiac Age offers up, shall we? More license boards, a New Game + option, a New Game – option (which stops XP from doing anything), a Trial Mode, remastered visuals and audio, a “speed up” option that lets you double or quadruple the game’s speed, and probably a bunch of other stuff I’ve forgotten. On PC, you can also throw in support for higher resolutions; a 60 FPS framerate; the ability to swap between Japanese and English audio; and the ability to swap between the original music, the OST version of the music, and an Orchestral version of the music.

There are two things I’m primarily concerned with for the purpose of this article: its PC tweakables, and its PC controls. Let’s have a gander at both, starting with a massive screenshot dump of most of the game’s options. First, the “new game” options. 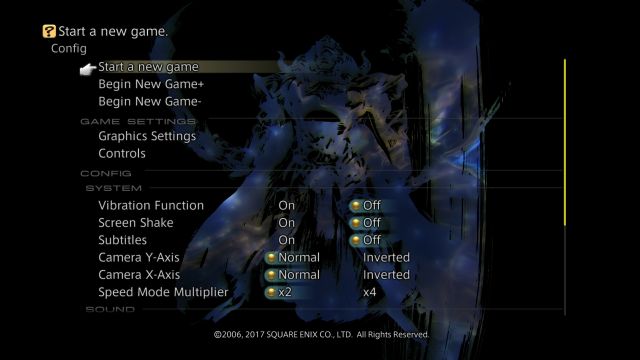 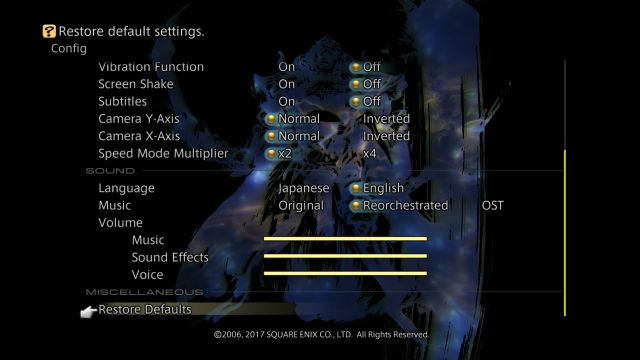 And now, the Graphics Options. 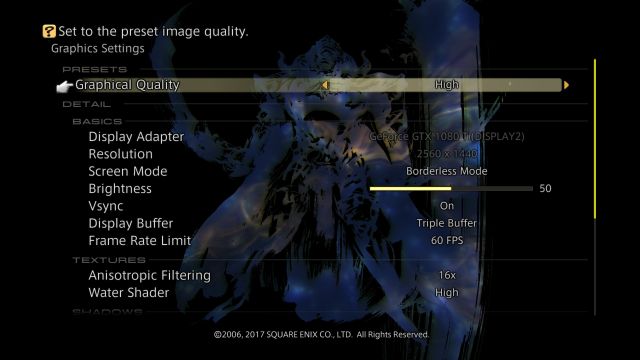 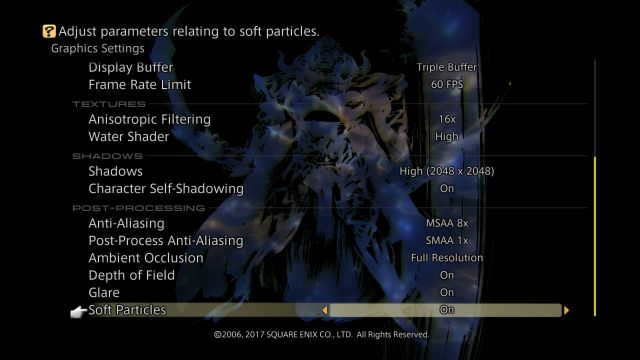 Nothing overly out-of-the-ordinary, and most of the graphical options are filtering or post-processing, which is likely what you expected because this is a PS2 game. This means there isn’t a huge variance in graphical quality between “everything turned on” and “everything turned off”, with anti-aliasing and its ilk appearing to make the biggest difference. As an example:

We can also have a look at some close-ups. The first two are comparison shots but bear in mind there’s soom room for tweaking based on preference, like turning off Depth of Field: 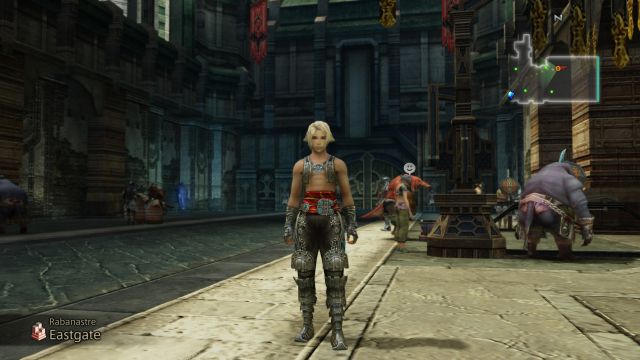 High quality, everything turned on. 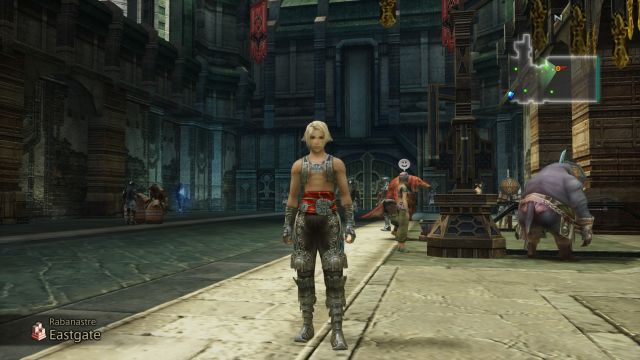 Low quality, everything turned off.

And a couple of general shots: 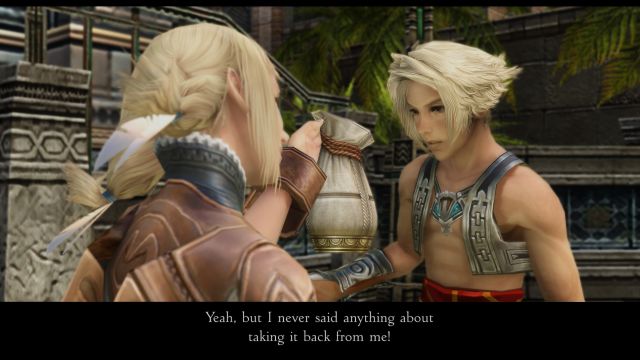 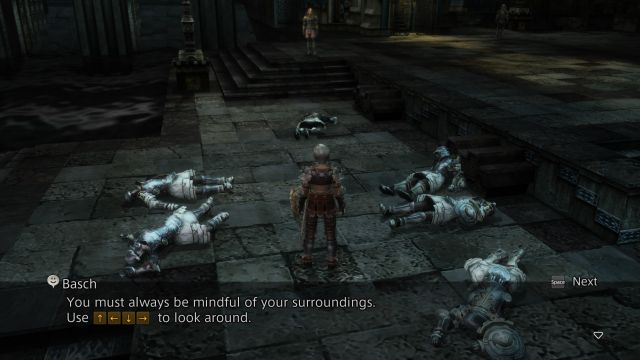 So yeah, the added sharpness of the graphics doesn’t really do Final Fantasy XII: The Zodiac Age many favours by letting you closely examine the decade-old graphics, but again – it doesn’t really look bad. Just a bit dated, and that’s fine.

Oh, and it also runs at a constant 60FPS, but as I’m running an i7-3820, a GeForce GTX 1080, and 16 GB RAM, I wasn’t really expecting anything else. This may not be your experience – this isn’t a PS2 game, and it does seem to require more grunt from your PC than you might expect if you just heard “PS2 remaster.”

So let’s talk about controls. Two notes: first, I haven’t even tried this with a gamepad because the mouse and keyboard controls are perfectly serviceable. Second, there is one area in which the controls might muck up a little bit and that’s “having multiple controllable party members”, but if memory serves that’s a few hours in from the game’s beginning. I’d actually be mildly surprised if that caused any real problems, though.

I’m going to give you a screenshot of the default control layout now, and I’d quite like for you to not freak out. It’s better than it looks, I promise. 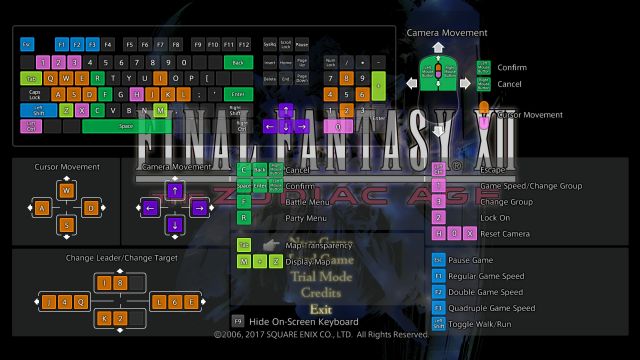 Okay, really, calm down. Yes, that looks like the usual “PC users have four limbs, they can use all of them on the keyboard” we see from far too many Japanese ports, but in this instance it’s honestly not that bad.

You see, the main plus point of the mouse and keyboard controls is that Final Fantasy XII knows and understands that the mouse exists. What this means is that you use the mouse to control the camera (and select menu options, albeit mostly with the mouse wheel – cursors are still Not Really A Thing) and use WASD to move around. You can left-click or tap space to talk to people or use stuff or confirm actions. You hit Tab to overlay the map onto the game screen.

Most of the other important controls are clustered around your left hand, although even some of the remaining ones (like tapping M to bring up the full map) are hardly anathema. As an example, R brings up the party menu: it makes less sense to me than Escape, but it’s also right there next to your fingers. I did initially have an issue with the controls in that I really don’t like mouse/keyboard controls where movement immediately resets the camera back to behind the character, but thankfully, there’s an option for that.

Oh, and you can massively speed up your wandering through Final Fantasy XII by tapping F2 or F3, which is great.

This does bring us to the party controls, which are something that unfortunately aren’t used in the game’s opening hours. Now, if the horrific mess of a control layout above is any indication, this is probably going to be tied to I, J, L, or K. It may also be tied to the mousewheel, because that’s what I and K seem to be set to, at least. Alternatively, it may be Q and E.

That said, there’s also this part of the options menu: 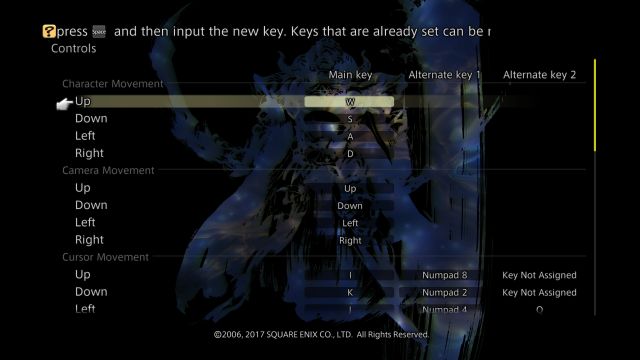 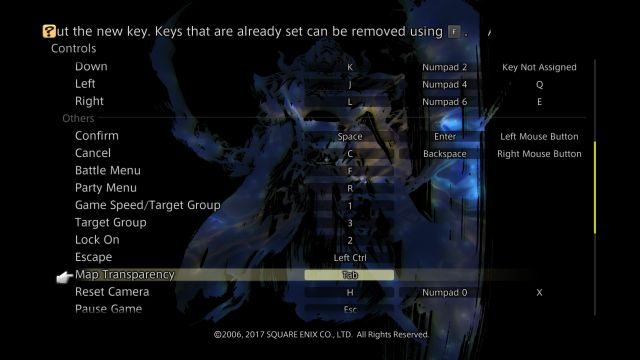 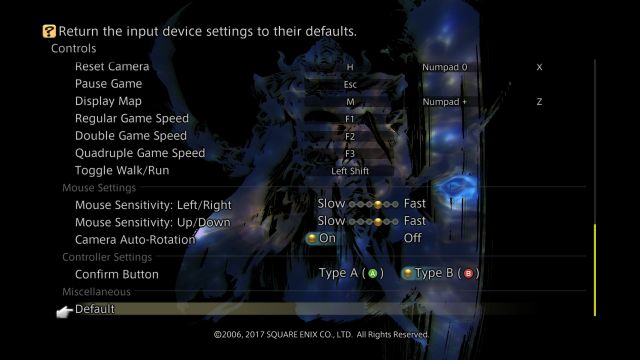 So yeah, you can redefine the keys. At the very least, if the defaults for party and character switching aren’t great, I can change ’em. Hooray!

Finally, bugs. Yes, there are reportedly a few. G-Sync may be one of the bigger culprits, if what I’ve seen is true; it can cause cutscenes to run too quickly or the game to run faster than it should. There may also be some issues with particular controller drivers, so if you’re using stuff without native support then you may have some issues.

Most everything else is fairly subjective. The art style may not be to everyone’s taste (and the sharpening in The Zodiac Age may exacerbate that) and the switch to the new license boards is going to piss off some people who’ll doubtless want the old ones back.

But for the most part, I’m entirely pleased with this port of Final Fantasy XII: The Zodiac Age. I like the way it looks, I like the controls, I like the framerate, and I want to play around with the new license boards. Options like the ability to increase the game’s speed and switch between the various soundtracks are much appreciated. In short, unless you’re married to the old license boards, I’m not seeing many drawbacks to this version at all. Thumbs up.

Watch David Brevik demo his new game It Lurks Below