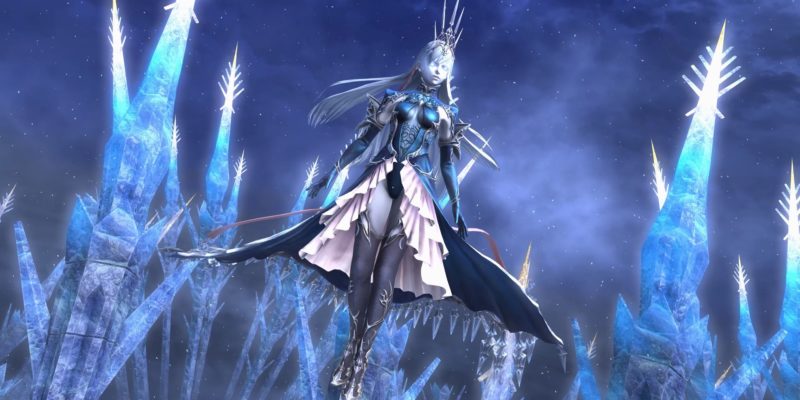 This is a bit of a divisive one. Personally, I don’t think Final Fantasy XIV‘s Eden’s Verse: Refulgence is particularly difficult, while others – who’ve cleared Savage variants of the earlier Eden’s Verse raids – have told me that they have more trouble with this than some of the Savage fights. So, uh, your mileage may vary.

The fight with Shiva is certainly the most cinematic of the bunch, and it brings back a lot of very unpleasant mechanics like slippy-slidey floors. Nonetheless, a fair few attacks don’t actually do too much damage. It’s a very fancy fight, with Ryne shifting between Shiva and Oracle of Light forms regularly, and this changes up her attacks… but that actually doesn’t matter a great deal. There’s pretty good telegraphing as long as you aren’t lagging too hard, and you can take a few hits if you aren’t heavily undergeared. 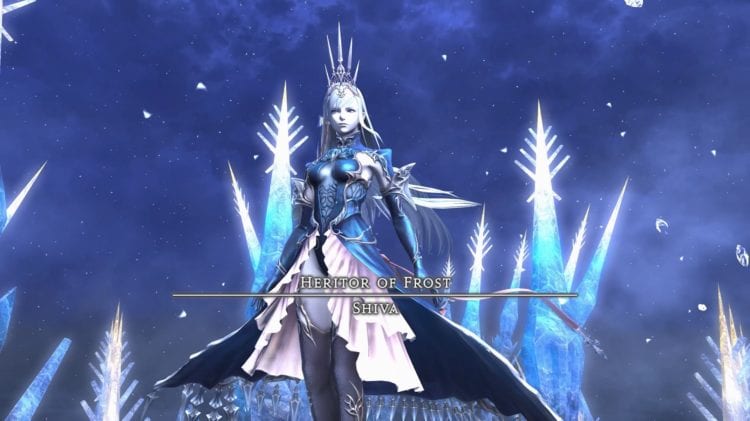 Look away every time Redress is cast to avoid being stunned. Pay attention to the location of any mirrors so that you can easily avoid the reflected attacks – most of the ones she casts are well-telegraphed, but the mirror ones aren’t. As for Holy, start at the edge of the arena and then run back into the center to minimize the damage you take. Also, try to remember the safe areas for Biting Frost, Driving Frost, Axe Kick, and Scythe Kick. If you can remember one Frost and one Kick, the others are effectively the opposite of that.

When the party splits into two groups, kill the adds ASAP and block any tethers that appear.

With those in mind, have a look at Diamond Frost and Path of Light below, and you’re pretty good to go. Once the Endless Ice Age cast begins, you’re in a DPS race; take down the Ice Veil and you win. 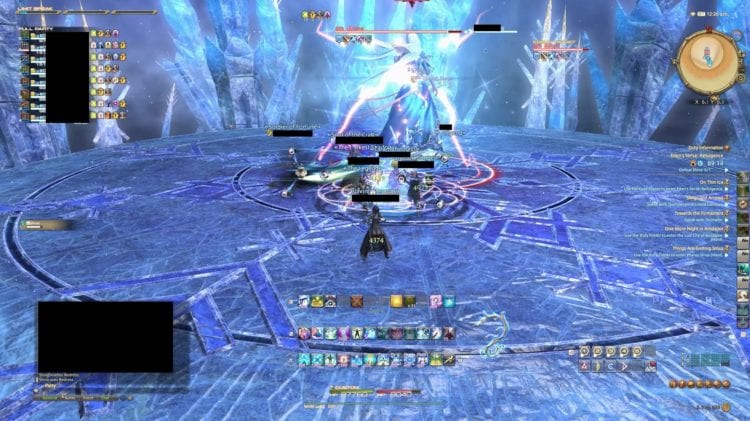 Turn away from Redress. It’s rude to watch someone while they’re getting changed.

Absolute Zero – Party-wide AoE.
Redress – Shiva changes form. Look away from her to prevent being stunned, though note that the stun comes out a few seconds after the end of the cast.
Axe Kick – Massive circular AoE centered on Shiva. Run to the edge of the arena to avoid.
Scythe Kick – Donut AoE around Shiva. Either stand directly under her to avoid or, if she’s being tanked at one edge, far away.
Redress (Again) – The second (and some later) casts of Redress will also cover the ground with ice, causing you to go sliding whenever you move. Careful, as this is normally followed up with…
Biting Frost – An AoE that hits three-quarters of the arena. Stand (well, slide uncontrollably) behind Shiva to avoid.
Driving Frost – Conal AoE that hits behind Shiva. Run to her side to avoid.
Double Slap – Tankbuster. 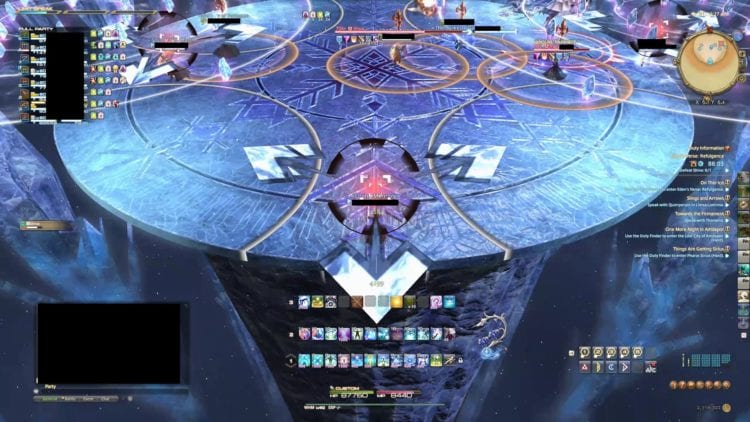 Diamond Frost is basically “AoEs everywhere,” but it’s not as bad as it looks.

Diamond Frost – Party-wide AoE, which triggers a number of other effects. Large sections of the arena will be marked with further AoEs. Three party members will be marked with icons that’ll cause them to fire off line AoEs in three directions around them; they should move to the safe edges of the arena. Other party members will be marked with targeted AoEs and should split up. Following the resolution of most of these effects, the party members responsible for the line AoEs will be tracked by arrows, and large AoEs will trail after them. They should keep running and try to keep these away from the party.
Heavenly Strike – AoE Knockback. Get close to Shiva to avoid being hurled off the arena.
Mirror, Mirror – Shiva summons mirrors around the outside of the arena. These mirrors will reflect any attacks she makes, causing them to repeat.
Shattered World – Splits the party into two groups of four (tank, healer, and two DPS). Each party must defend the crystal they’re teleported to from the incoming adds. Some adds have tethers that should be blocked by the tank, and the party will be hit with damage as adds spawn. 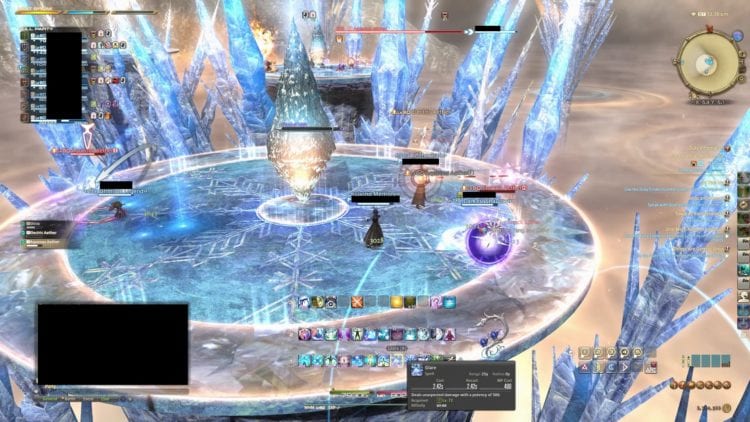 Simple enough: defend the crystal, block the tethers, and heal through the AoEs.

Holy – Distance-based AoE. Get as close to the edge of the arena as you can, and then be ready to run back into the center. You see, this may trick you: Sometimes, Holy is the actual “distance AoE on Shiva” it looks like; sometimes she’ll spawn Holy bombs around the outside of the arena and you’ll need to sprint back in to mitigate damage.
Light Rampant – Yet another party-wide AoE.
The Path of Light – Variable attack. The initial cast targets two people with markers, and conal AoEs will be aimed at them. Four meteor towers/circles will also spawn that players need to stand in; the marked players should take care not to hit anyone in the circles.
The Path of Light (Again) – The second cast is the same, but with two meteor circles instead of four. Each circle requires two players to stand in it to mitigate the damage.
The Path of Light (Yet Again) – Same again, but this time four players need to stand in one circle.
Twin Silence – Shiva performs Driving Frost to hit the area behind her, immediately followed by Biting Frost to hit the rest of the arena. Very careful timing is required to avoid both of these.
Endless Ice Age – A DPS race. Destroy the Ice Veil before the Endless Ice Age cast finishes and you win. 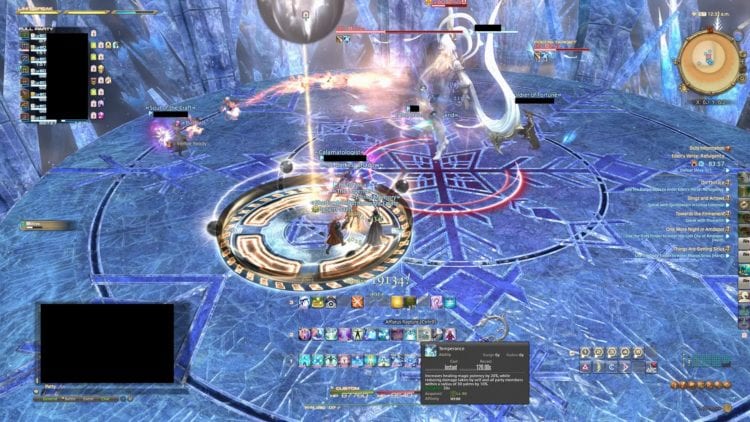 Everything I mentioned in the above “The short version” section is pretty much the stuff you need to remember. Redress can cause serious problems if you don’t look away, and the actual stun goes out a couple of seconds after the cast finishes so it’s easy to turn back too early. Holy can be a nasty surprise if you’re not expecting the bombs, but now you know that there’s a chance the attack is trying to trick you, so hey.

Try to remember that Axe Kick is a centered AoE while Scythe Kick is a donut AoE, and that Driving Frost hits backwards while Biting Frost hits everywhere else. These’ll help you dodge those AoEs and keep you in good stead for the rest of the fight.

Diamond Frost isn’t as bad as it looks – it’s just a lengthy set piece of an attack, and the party is unlikely to wipe there if nobody panics too hard. Do pay attention to the mirror positions, though, and mentally figure out where Shiva’s reflected attacks are likely to go. You can probably eat one of them without dying if you’re not already Vulnerable, but when there are four mirrors, there’s a lot of overlapping space. 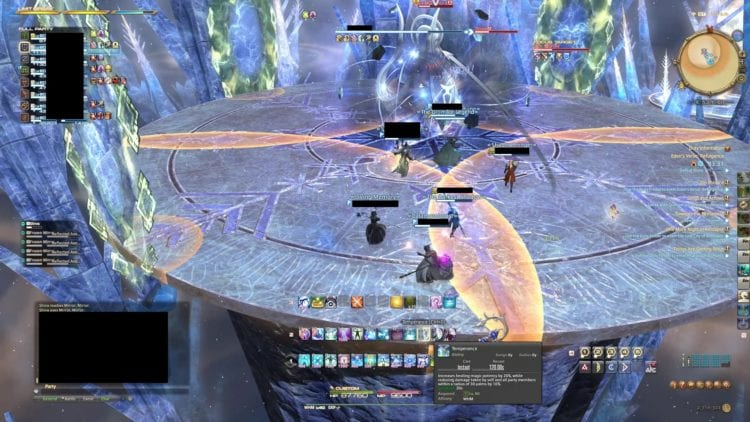 Mirror, Mirror has very different safe zones based on the attack Shiva used, but those safe zones will always be small.

One other interesting thing: During the Shattered World section, performing perfectly will result in a damage buff for the rest of the fight. This isn’t actually all that important in Normal, but it’s a nice boon anyway.

Finally, when Shiva’s health gets low, she’ll start spamming Absolute Zero. Anyone afflicted with Vulnerability is likely to die, and healers will likely need to counter-spam with every AoE heal they have while everyone else should use mitigation or life-drain. That’s the last real hurdle of the fight. 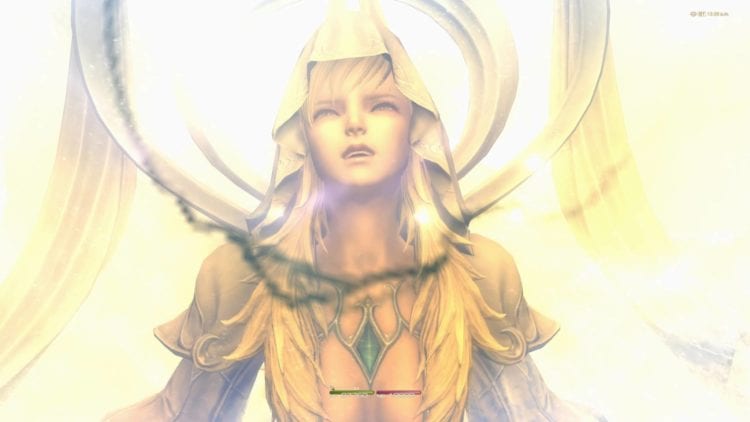 If you make it to this point with the party still alive, you’ve basically won.

Once you get to Endless Ice Age, you’re basically done. It may be worth raising any dead DPS at this point if healers have a spare Swiftcast, but otherwise just burn down the Ice Veil and don’t bother with any healing. No damage comes out at this point: It’s a straight DPS race to the finish.

And with that, Eden’s Verse: Refulgence and Eden’s Verse as a whole come to a close. Unless you want to drop into Savage, but that’s a whole different ball game…

For the rest of our Final Fantasy XIV: Shadowbringers raid, dungeon, and trial guides, check out our guide hub.

By A.K Rahming5 hours ago
Guides