I have a suspicion that most of the people who read the annual Football Manager reviews are those who are 99.7% sure they’re going to buy the latest installment of the game. The rest actually already did, they’re just curious what some critic on the internet (hello) thinks about this year’s version.

Other people, general gamers, must look at the annual feature changes with a sense of total bafflement. I mean, one of the most substantial changes in Football Manager 2015 is that the main user interface (UI) now lists the important buttons in a column down the left-hand side instead of as a series of tabs across the top. That counts as a major change.

I’ve seen people on the Sports Interactive forum have a mini meltdown because setting up an obscure aspect of Under-18s team scheduling takes two clicks instead of one. 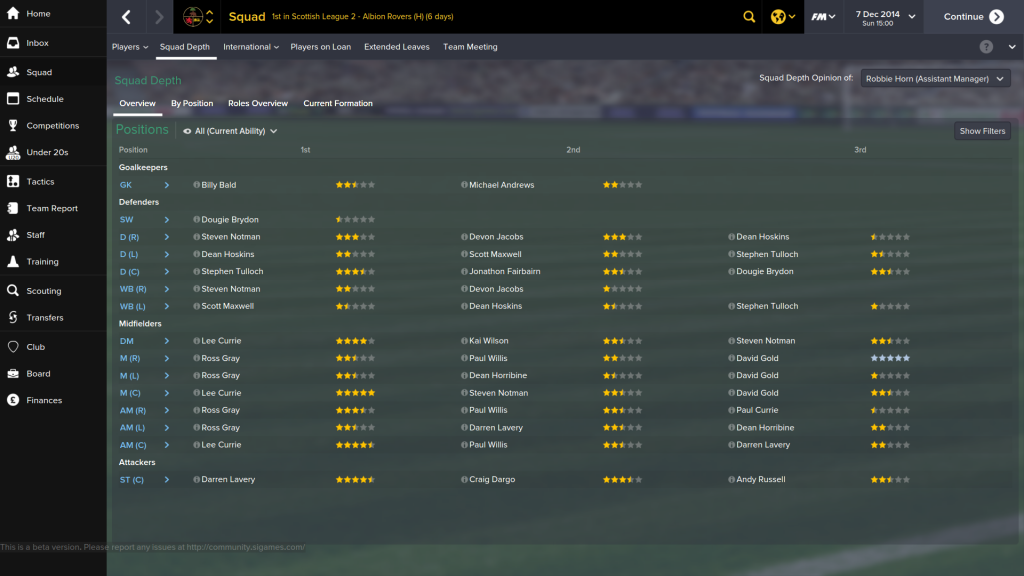 Guess I won’t be playing a sweeper system, then.

I’m not mentioning that to mock those players (honest,) but to highlight the fact that what may come across to most as irrelevancies can be deal-breaking issues for some. Football Manager 2015 is a game where the time players put in should most appropriately be measured on the geologic scale. A few extra clicks across an era like that can be a massive, arthritis-tempting hindrance. UI changes are a big deal.

The left-hand column is actually a returning UI feature. I’m not sure precisely when Sports Interactive moved it towards the top of the page (around 09, maybe?) but it definitely used to hang around over on the left.

I like it there. A single click takes you to the important screens (squad list, scouting, training, tactics and so on,) whereupon additional options appear across the top. Once you’re on the squad screen, for example, you have access to all of the additional forms of filtered information about your players; contract lengths, attributes, match fitness and the rest. Meanwhile, the left-hand column stays put in case you want to suddenly hop to your Under-20s squad or something.

Some of the left-mounted shortcuts are definitely more useful than others (it may just be me, but the general club finance link is not exactly going to get regular use) but as a method of navigating around all your pre-match business in an efficient manner it works well. 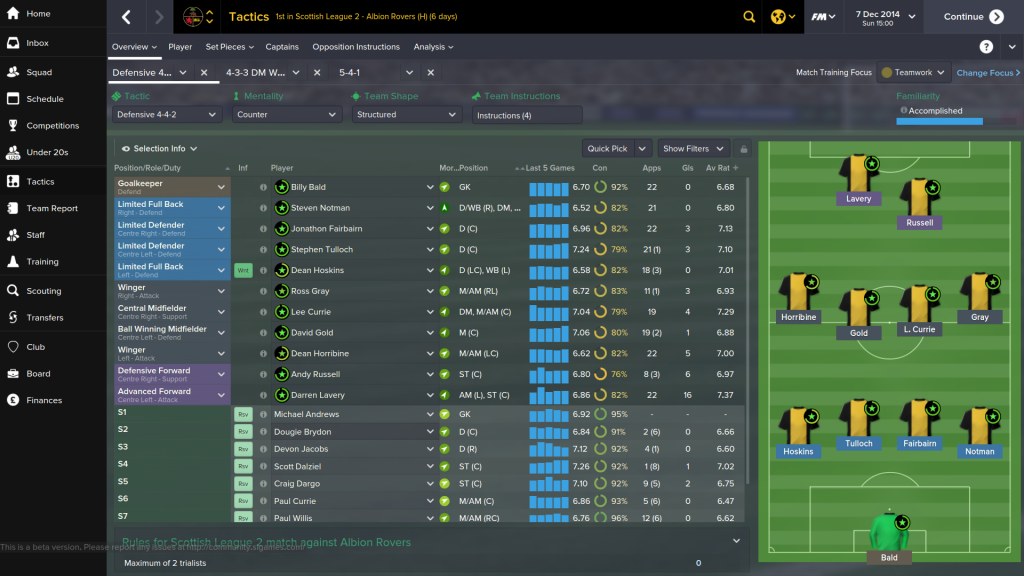 There’s something a bit too “tablet game” about that pitch display.

The main tactics screen on the other hand, is a bit of an oddity. In Football Manager 2014, the pitch section of this screen reiterated some important information like the condition of a given player, their morale and various other handy details. Players could be assigned to positions with a single click.

Now, the pitch view shows … names, shirt numbers and role suitability. Very slight positional changes indicate whether a player is designated as a winger vs a wide midfielder, or a limited full back vs a full back with some actual skill. Selection is now controlled through drop-down menus over on the left hand side, where FM14 just had a pretty standard list. The removal of additional information from the pitch graphic is unhelpful, and player role selection feels quite a bit clunkier.

It’s not a game-breaker by any means, but it takes some getting used to and is one of the few things about the latest user interface rejig that I’m not really keen on. 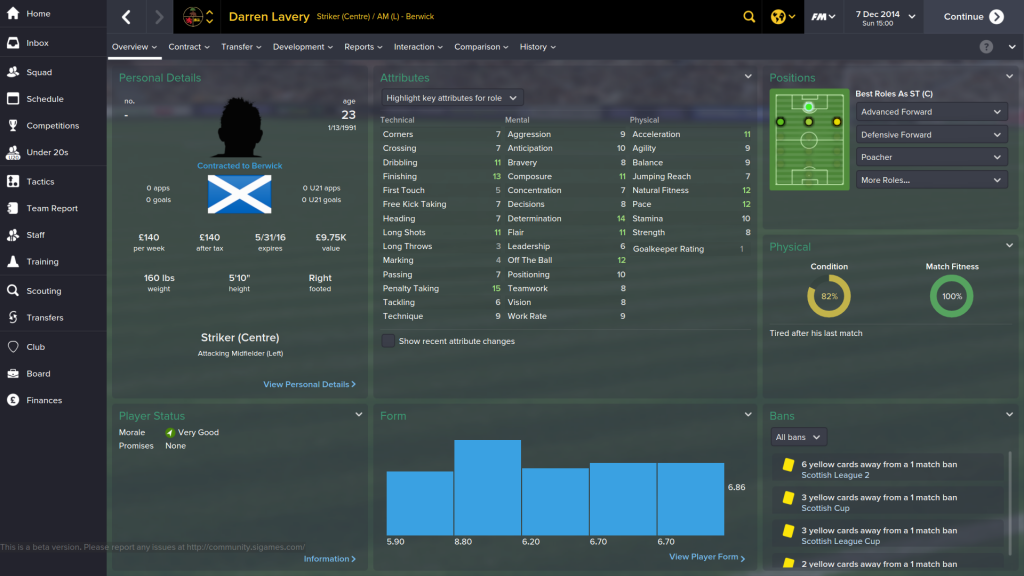 In real life this guy has scored about three, but under my regime he’s a goal machine.

Changes to scouting will probably divide people too, but here I find the new system to be worthwhile. Scouts return plain language reports with positive and negative bulletpoint-type opinions about the player, noting things like “he’ll blend in well with the squad” (suggesting a player capable of high-level locker room banter) or “he’s a bit rubbish in the air.” It’s all just a text-parsed summary of the player’s numerical attributes of course, but this is something I’ve been wanting in the game for ages so I’m happy to see it show up.

While on the subject of player stats, scouting now takes time to reveal those attributes in full. When you first take a look at a player, his vital numericals will be displayed in a range (passing: 7-10, that kind of thing.) To get a clearer picture of a player’s true nature takes, as in real life, a bit more time and a few more scouted matches. Again, this felt like a minor, but positive, change. Digging out a special player now takes a bit more effort (and is consequently a little more rewarding,) while scouting feels more like a process rather than a magical window into a player’s soul.

If this all sounds too much like extra busywork, there is a toggle to see all attributes for players that can be applied when starting a new game. 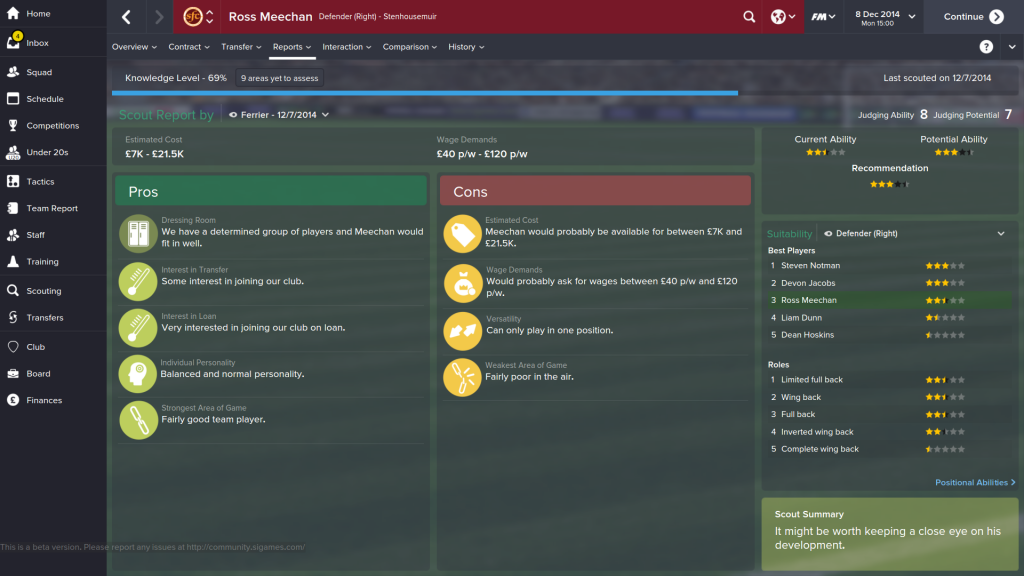 Good to know he’s not a sociopath.

Football Manager 2015 is also the first in the series (as far as I know) to feature the application of stats and attributes directly to the managerial ‘character’ you create at the start of a game. Previously, you just had to set your manager’s general level of experience (former professional player, sunday league player etc,) which would in turn have an effect on how seriously your team’s players might take your instructions.

This concept is now broken down even further into ‘Tracksuit’ and ‘Tactical’ manager strands with accompanying coaching badges. Tracksuit management broadly refers to your manager’s ability to take and influence training sessions (as well as poor taste in fashion,) whereas Tactical is more about the on-field systems. Improving your coaching knowledge lets you bump up the attribute points.

It’s effectively a self-regulated difficulty level. If you fancy making your lower league climb a bit easier, then bump up your coaching knowledge and go to town. Alternatively, you can try to do the equivalent of making it as Inter Milan’s boss without a single footballing GCSE to your name. Watch in horror as every single transfer and contract negotiation falls through because everybody thinks you’re a naive footballing child. 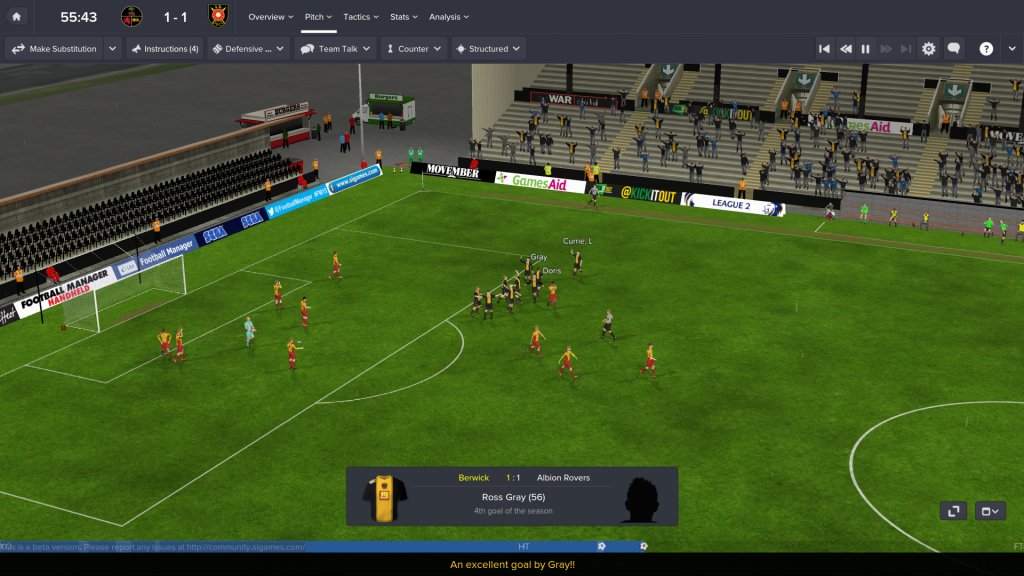 Another spanking goal from Ross “Fifty Shades of” Gray.

The last couple of Football Manager games have made a noticeable shift towards hiding the numbers driving the simulation and giving the players words to use instead (hence the death of sliders and the rise of player roles, tactical shouts and the like.) Football Manager 2015‘s RPG-ish character system is therefore unusual in that it puts numbers back in the foreground, and it does feel slightly frivolous in terms of what it adds to the game. Still, it does provide players who love to tinker with training routines a method of inserting themselves into that coaching role, so will probably be welcomed by some. At worst, it’s easy enough to ignore.

Other role-playing interactions like press conferences are supposedly expanded in this version, but they still do an incredibly good impression of being just about as repetitive and lacking in insight as real life sports interviews. Trading the odd mind-game jab at a rival manager can be somewhat engaging, but the interview events remain hamstrung by the knowledge that the more eccentric and interesting answers will always undermine your team; so why choose them, unless you’re aiming to cleverly role-play a manager determined to destroy the club from within?

There are a few inconsistencies there too. Most of my time in Football Manager 2015 was spent leading Berwick Rangers up through the Scottish league system (I can’t resist starting a career with players who’ll barter for an extra £2 goal bonus and a bag of chips in their contracts.) After losing 4-0 at Aberdeen in the Scottish Cup (while still in Division 2,) the post-match interview treated it like some kind of major disaster, instead of the expected pasting of a minnow. 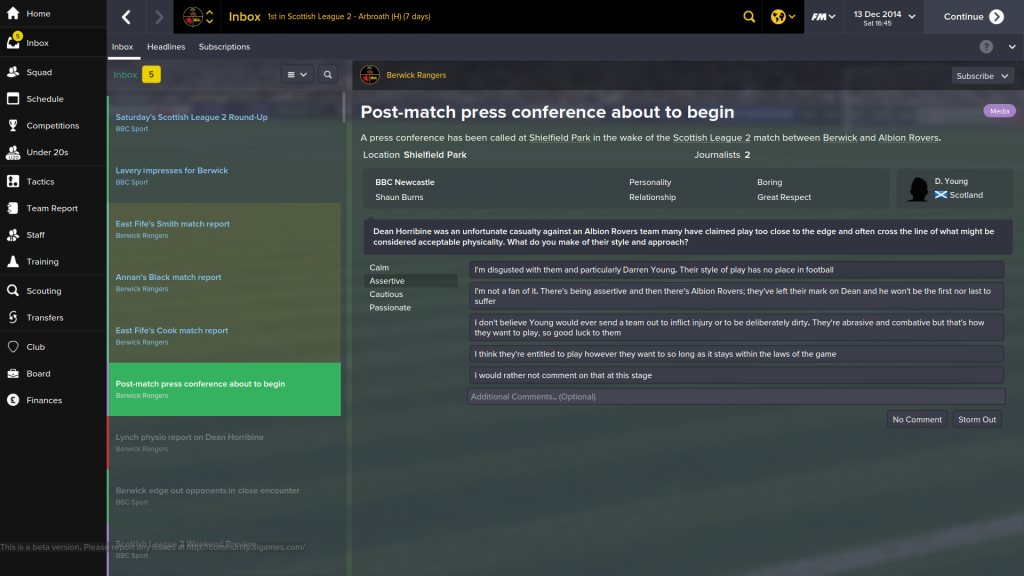 Hurrah, time to slag off a rival manager.

But while player and press interaction has either stagnated or expanded in not especially interesting ways, Sports Interactive’s 3D match engine is looking in respectable shape for launch day.

Anybody who recalls the great full back debacle of Football Manager 2014‘s early days (where defenders were quite happy to sit back with a sandwich while forwards waltzed beyond them, no matter what instructions they were given) will know that this has not always been the case.

It’s still not a one-to-one replica of actual football, of course. No amount of neat goalkeeper motion capture can disguise the lack of weight the players possess, or people dallying on the ball for eerie amounts of time; but as a visual approximation of your tactical choices it’s about as strong as I’ve seen it in recent years.

The great paranoid dilemma of watching matches play out in this series is whether mistakes and oddities are the result of match engine quirks, or the direct response to your awful tactics. In Football Manager 2015, I’ve felt more confident than before that my team is at least attempting to play the way I’ve sent them out. This is crucial to maintaining the fragile sense of influence and control that the player has over whatever number crunching is going on behind the pitch, so that’s a substantial endorsement for this version of the game. 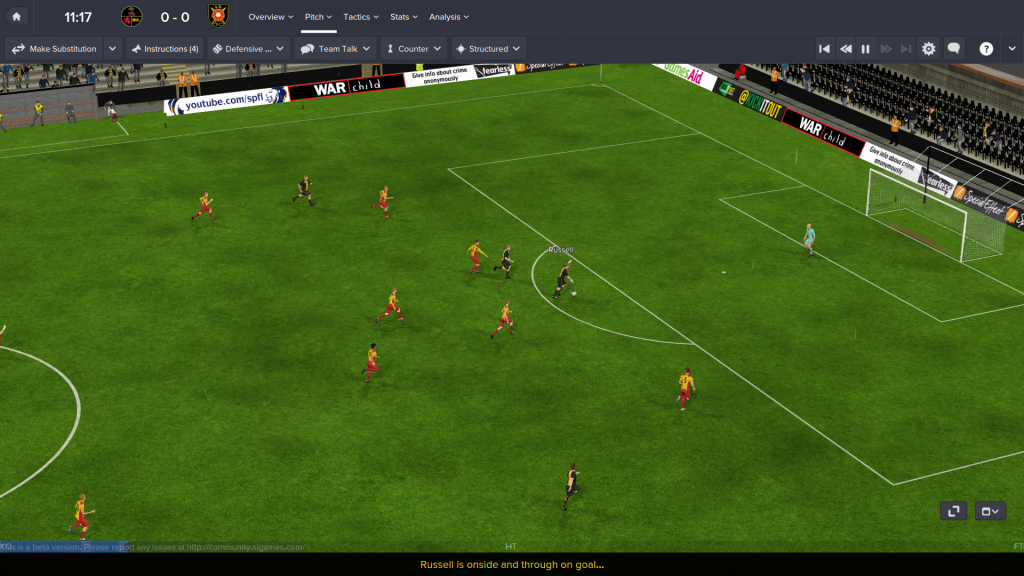 BURY IT YOU TART

Football Manager 2015 is still technically in beta for another 48 hours or so as I write this, so there will no doubt be a patch accompanying the release version. Hopefully it won’t suddenly turn the match engine into a circus and make what I wrote above look ridiculous. In terms of bugs, I’ve not come across anything more damning than high-scoring lower league matches (fixed during the beta process) and what seems to be a slight over-occurrence of injuries. Some of my substitutes disappeared mid-match at one point, but reappeared shortly afterwards.

There will be quirks I’ve not uncovered, as there always are, but I haven’t run into anything as aggravating as last year’s launch build weirdness with transfer offers.

Variable experiences will always exist for a title like this (just try reading the Sports Interactive forums for a bit and see if you can decide from player feedback whether this edition has too many injuries or not; it’s basically impossible,) but as someone who’s been relatively critical of the past couple of versions I’ve been largely impressed by Football Manager 2015. It’s not bringing a set of ground-breaking new features to the series, but it makes positive alterations to the UI (tactics screen aside) and scouting. As launch day approaches, the match engine is in better condition than in prior release builds.

Those yet to be converted to FM might read that summary and wonder why it translates to a hearty recommendation, but all Football Manager devotees know the value of consistency and stability.