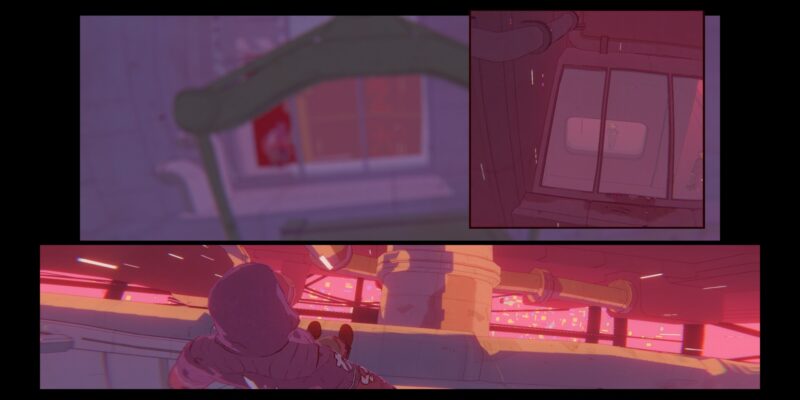 Take a Philip K. Dick-style story set in a dystopia where the main character is on the run and you’ve officially got my attention. Foreclosed is basically what you’d get if you crossed Dick’s work with graphic novel sensibilities and then strung it together with tired gameplay straight from the early ’00s. The game has a retro-future look and the premise is actually quite intriguing, but the repetitive third-person shooter action and underwhelming forced stealth sections make it clear that the game is truly stuck in the past. After its meager four-hour runtime passed without incident, I couldn’t help but feel let down.

Foreclosed is all about a guy named Evan Kapnos. In a future where people are literally born into debt, said debt is purchased by corporations, leaving the children to basically grow up as corporate property, and they eventually become slaves for their entire lives. Kapnos’ debt was purchased by Securtech, but after the company is forcibly ruined, it and all of its assets, including its employees, are scheduled for auction. Kapnos finds himself locked out out of his life and at great risk. But there’s more to it than that, as Kapnos ends up working with Securtech’s founder to get her company back and return Kapnos’ life.

The storytelling is unfortunately rather uneven. There’s a plot twist later on that feels kind of silly and lacking in clarity. Most of the voice acting is okay, although Kapnos’ actor gives one of the worst performances in the game. He sounds a bit silly and his line delivery isn’t all that believable, but it’s not so bad that you’ll burst into laughter every time he talks. You can select dialogue options during chats and make a binary choice in Foreclosed, but there’s only one route through the game. The two “different” endings aren’t much to write home about, as one is just a few seconds long and the other is maybe 30 seconds. 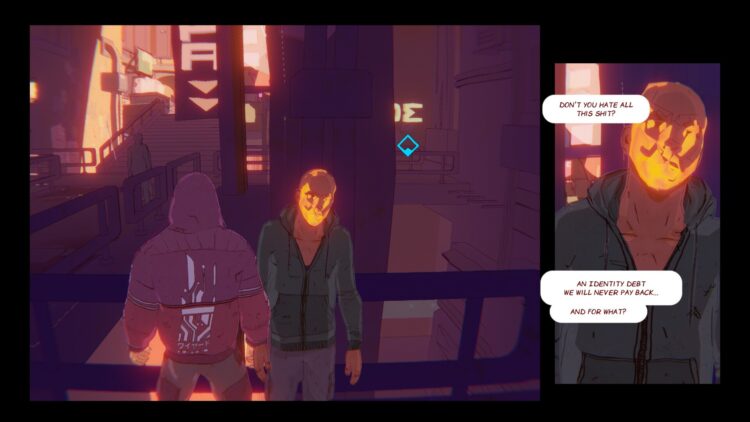 Things were promising at first. The game’s cel-shaded look does the job, even if it is more than a little generic. But the way the gameplay makes use of comic-style panels that switch between fixed camera angles is nifty. Sometimes you’ll get a view from overhead or the side. Stealth sequences are often top-down to give you a view of your surroundings. But most of the game is played from a third-person perspective. Still, I enjoyed the variance provided by the comic presentation, even if it’s been done before.

Aside from the identity premise, Securtech has been experimenting on employees to give them augmented cybernetic implants. At first, Kapnos can use his implant to kill enemies by overloading their implants, which is pretty badass. Unfortunately, he can only use it from a few feet away when the enemy doesn’t know he’s there, which makes absolutely no sense. Instead of being super awesome, you instead find a gun with infinite ammo. I’m not sure what it shoots, but the “bullets” are weak as well. In addition to the gun being weak as hell, Kapnos himself is also weak as hell due to him refusing to overload his enemies during battle for no good reason.

At close range, Kapnos will die from a couple of bullets. If he gets shot for a bit, the screen loses all color and you have to wait for his health to regenerate. Yeah, that shit again. At first, you can instakill foes by headshotting them, while body shots do next to nothing. At one point, Foreclosed went from letting me pull off one-hit kill headshots to presenting enemies able to withstand multiple headshots, just a minute or so later mind you. No rhyme or reason whatsoever. This, of course, makes shooting feel lacking in every way. 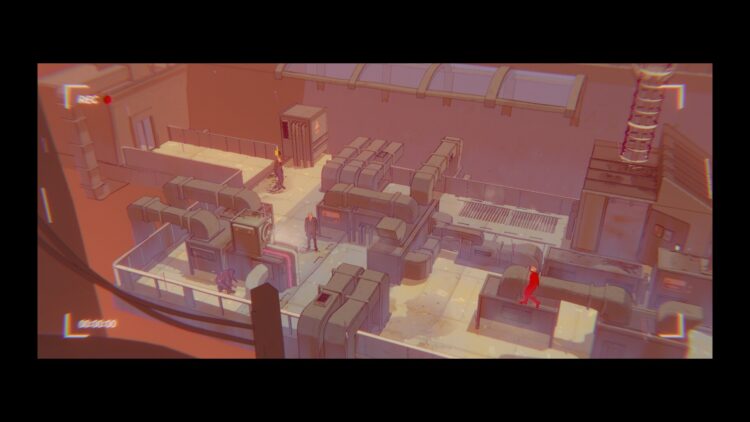 Enemies in Foreclosed aren’t just mostly immune to your shitty gun, they’re also unbelievably stupid. They don’t use cover, they just stand in one spot and shoot at you. Sometimes they move forward. Although, considering how insanely weak your gun is, perhaps that’s why they aren’t at all scared. Kapnos gets experience as he kills foes, and he uses experience points to buy new powers and gun upgrades. One gun upgrade lets your bullets go through helmets. Even with it, it can take seven headshots to kill an enemy. Wonderful.

The other powers involve such things as bringing up a useless emergency shield that leaves you completely defenseless after using it, a slam attack, or locking your enemies in a forcefield. The slam attack doesn’t costs much energy and is completely broken, so you can just slam enemies into the ground, headshot them, and then move on. Combine that with the rapid-fire gun upgrade and you’ll tear your way through enemies with ease, even if they still take an insane amount of shots before they go down.

You also get telekinetic powers, because why not. Unlike your shit-tier gun, hitting an enemy with an object in this manner one-shots them unless they have a forcefield up. But slam gets rid of forcefields. Slam really is way too useful. Aside from all the shooting, you’ll also occasionally have to wander around until you find a few nodes to activate. It’s the old standby where you get close to a thing and a meter fills up based upon proximity. These feel like padding and add nothing. There are forced stealth sections, as I said above, but you have practically no stealth capabilities, so the sections are as basic as it gets. 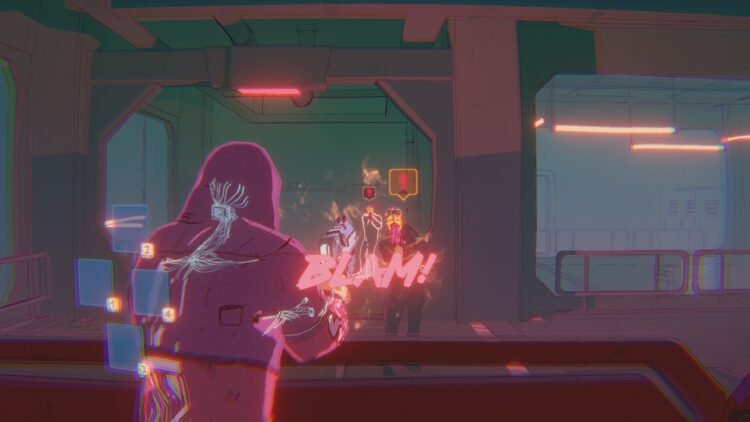 Just hack their implants, what are you doing?

What’s weird is that you can almost never choose to use stealth in most combat encounters, as enemies just magically know where you are most of the time. There aren’t many forced stealth sections, and most of them are simple enough, but one of them is so awful that it’s worth mentioning. Not only is it a forced stealth section, but it also ties in a few of the aforementioned “activate the three nodes” sections. While you’re sneaking. Oh, and you have to do two of these in a row without a checkpoint. It’s not hard, but memorizing a boring stealth scavenger hunt is underwhelming tedium of the worst kind.

Foreclosed isn’t a bad game, but it squanders its potential by focusing on bizarrely underwhelming gunplay over everything else. None of the gameplay is satisfying, and the game is so short that it feels somewhat insubstantial, especially considering how much promise the premise had. Still, it’s playable and is pretty alright for most of its duration. The presentation and setting help make it more worthwhile than it would have been otherwise, but the game is still a fairly large letdown as far as I’m concerned. 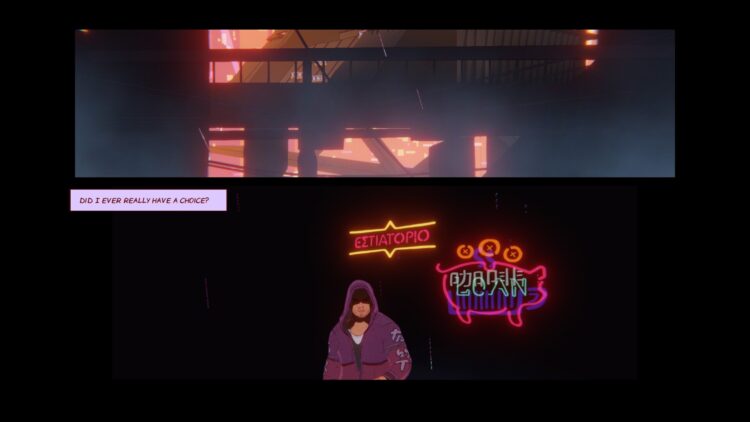 While it has a strong premise and some neat ideas, Foreclosed it let down by rote, subpar third-person shooter action and unimpressive stealth sections during its short runtime.