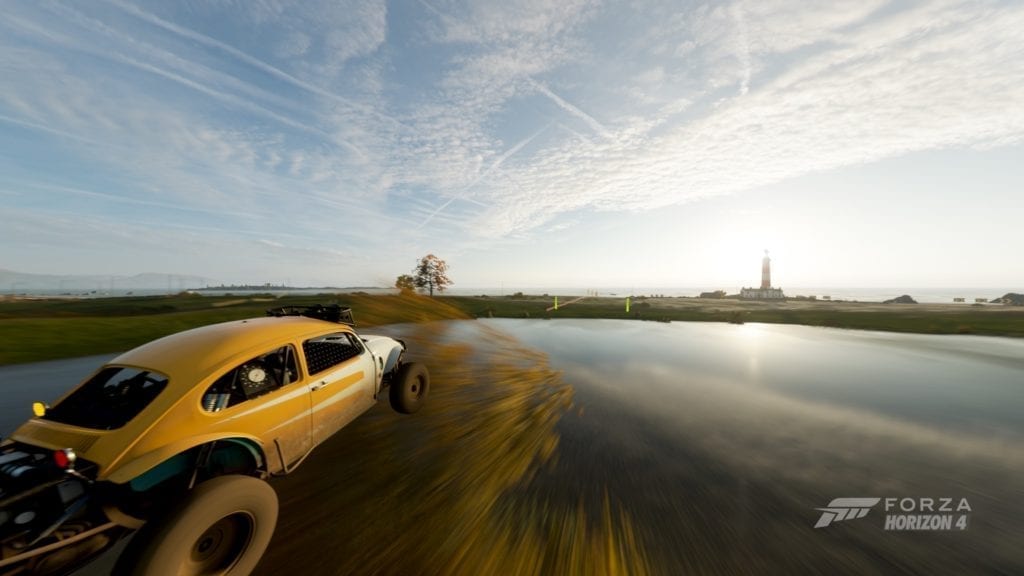 While the Forza Horizon series has been around since 2012, I didn’t get my first experience with it until Horizon 3 in 2016. After all, that was the first entry in the series to come to PC. Open-world racing games were already a passion of mine, but Horizon 3 blew everything else out of the water. It was love at first drift. Now, Forza Horizon 4 is here. For me, this is effectively a “sequel”, and sequels have the tendency to fall short of the original. But, that’s not the case here. Playground Games has yet again delivered a pedigree arcade racing experience.

My first few moments with Forza Horizon 4 were very reminiscent to when I played its predecessor for the first time. Almost immediately, I was blown away. The handling felt smooth, the visuals looked amazing, the sound was crisp; everything just melted together perfectly.

The big new mechanic this time around is a change of seasons. I admit I wasn’t too sure how much this would matter when the game was first unveiled. But after plowing around this virtual rendition of Britain, I’m pleased with the way it’s been implemented. The visual changes are enough to keep the world feeling fresh, as every area of the map does look legitimately different depending on which season it is. Gameplay wise, though, I didn’t find the results to vary as much.

Spring and autumn can be fairly rainy and, as a result, a little muddier. However, the off-road sections didn’t feel excessively more difficult. The biggest difference here is probably the wetter roads, which can cause some cars to slip and slide. But, as long as your car handles well, it’s not that hard to deal with. Winter by far brings the biggest change though, as it transforms the whole landscape into a massive white blanket. You can outfit cars with snow tires to better handle the terrain, but the game’s huge variety of off-road vehicles certainly fit this season the best.

Some of the events are tied to the specific seasons, but there’s always something to do here in Horizon. Honestly, it’s almost addictive, since it constantly reminds you of how much social media “Influence” you’re generating and what your new high score is for your skill combo. But speaking of having stuff to do, Forza Horizon 4 has made some more new changes to its events formula. 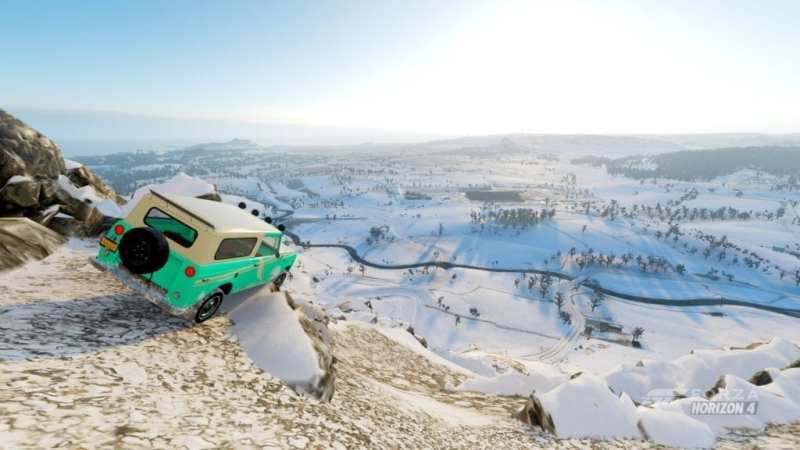 Fun at Every Corner

There are now specific racing series for different disciplines (road, cross-country, and off-road). Even so, you’re still able to use whatever car you choose. So, if you feel brave enough to take a Lambo roadster mud running, then have fun trying. Players can find businesses to take charge of, houses to buy, and also the new Horizon Stories, which are jobs that you can carry out to earn money. These new additions are arguably minor, but they do make the gameplay feel a little different from Horizon 3. But, really, it is only a little different.

For the most part, Forza Horizon 4 feels more like a continuation of its predecessor rather than a huge new chapter. There are a few quality-of-life changes. You don’t have to pay to switch out your car (finally), and the scenery has more breakable objects than ever. Oh, character customization is also a thing now, although it’s only limited to clothes and…dance moves, for some reason.  But, other than that, there really isn’t some huge list of changes. I know what you’re thinking – this would normally be a massive con for any sequel. But it’s hard to be mad at Playground Games for this. 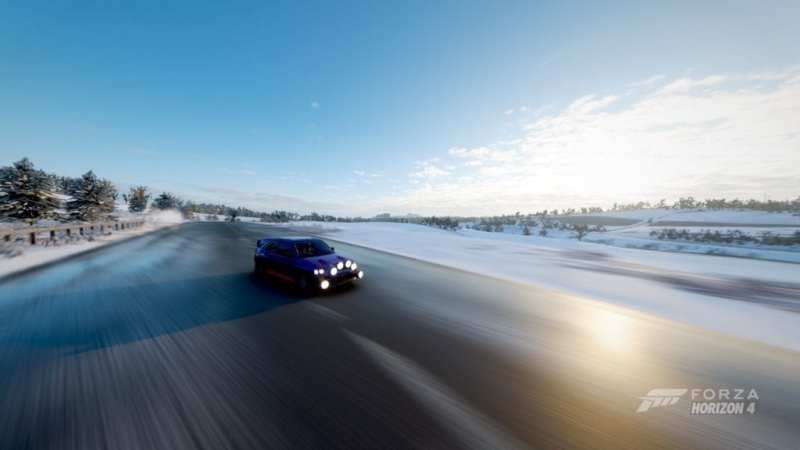 Forza Horizon 4 is not a dramatic change over its predecessor, but that’s actually not a bad thing

If It Ain’t Broke, Don’t Fix It

Since its inception, players and critics alike have praised the Horizon series up-and-down. As Horizon 3 was massively well-received, it seems only natural that Playground simply lifted all the good things from that, touched them up a bit, added a pinch of new stuff, and called it day. On paper that sounds lazy, but Horizon 3 was already so good. Having a better version of it is simply good enough.

Driving around Britain has been an absolute blast so far, and I’m loving the verticality of the terrain. This, at least, is a pretty big departure from Horizon 3’s Australia. The rolling hills and colonial architecture are simply breathtaking. Plus, having the Barn Finds return allow you to really explore every nook-and-cranny of this sprawling map. It’s roughly the same size as the last map, but the verticality makes it seem far bigger. With two expansions on the way, I’m looking forward to seeing how Playground builds upon it. 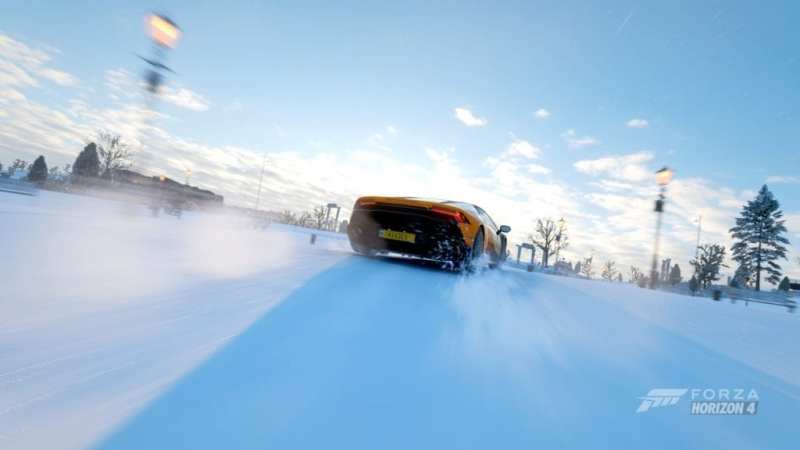 The sounds and scenes of pure freedom.

I Dream of Drifts

But, by far what I was most looking forward to with Forza Horizon 4 was seeing how well it would perform on my system. The PC versions of Forza Horizon 3 and its sibling, Motorsport 7, became infamous for their severe performance issues at launch. Thankfully, none of that really applies here in Horizon 4. My experience has been very smooth for the most part. I did run into a few framerate hiccups, audio glitches, and a single crash-to-desktop, but without a doubt, it’s still running better than even the current version of Horizon 3. This is a massive relief. I can finally say that the Forza engine has been successfully brought over to the PC realm, effectively making the whole Forza series a true cross-platform gem.

Like I said before, Forza Horizon 4 is not a massive step-up over its predecessor, but considering that was already an amazing racing game, the same can be said for this one. Whether you’ve never experienced a Forza game before or have been a longtime fan, this is definitely worth a pick-up. There aren’t many direct competitors to Horizon 4 in terms of open-world racers, but it soars well above the rest of the pack.

Even just as a racing game in general, it’s an absolute joy to play. No other racer comes close in terms of this level of polish – from the driving model to the freedom of customization, detailed open-world, and all-around gorgeous presentation. I fully agree with the final part of the game’s opening dialogue: “Don’t go anywhere, Horizon is here to stay.”

At ease, ladies and gentlemen. The king has returned to his kingdom. 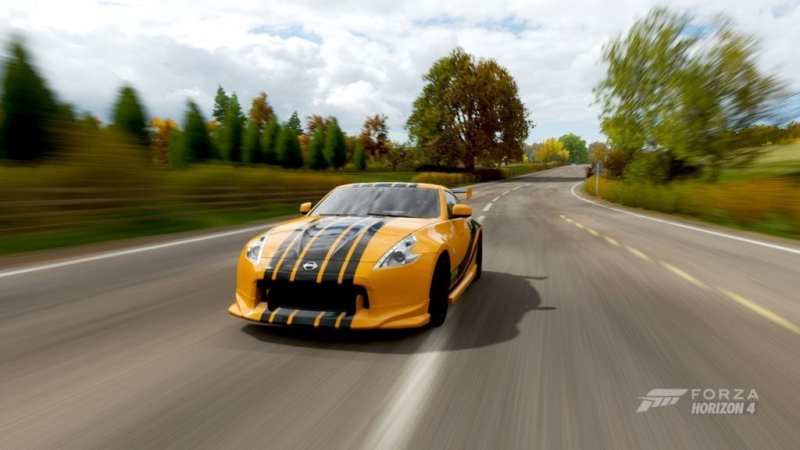 Forza Horizon 4 takes everything great about its predecessor and turns it up to 11. With its fantastically fun gameplay, gorgeous presentation and wealth of content, this is easily the best arcade racer on the market.

11-11: Memories Retold Will Have A War Child DLC For Charity