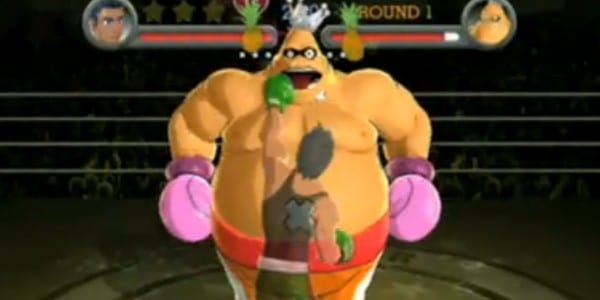 Popular Game Characters: Toss Them In a Fight, Who Would Win?

With the official announcement of Playstation All-Stars Battle Royale  and the upcoming Super Smash Bros Wii U/3DS, this brought to mind that classic geek game that everyone has played at one time or another. You know the one: If so and so fought so fourth, who would win?  So, let’s take a few chosen game characters, toss them into some scripted situations, and see what happens.

Set-up:  Let’s say the Ghost of Sparta was tricked into entering an ancient portal by Athena (re: wormhole) and found himself deposited in downtown Gotham City. Meanwhile, at a hundred or so feet above, the ever vigilant Dark Knight scouts for criminal shenanigans atop a stone gargoyle overlooking the streets. ‘Athena!’ and ‘Sorcery!’ Kratos exclaims as he starts poking at a nearby parked car which just happens to be the batmobile. And then he decides to slice it in two with his chain blades, because…well, he’s Kratos. The bat swoops down and the fight is on.

Outcome: Tough call. Both characters are more than capable of holding their own. However, Kratos has the strength of a god (he took down a Colossus, the massive titan Chronos, and even Aries himself, after all) yet Batman would probably outsmart the Spartan. Kratos would outright try to murder bats, but bats would try to restrain and detain.  This has to be a draw and who knows, they might even reach a truce to take on some villains.

Set-up:  Samus crash lands on earth during the crux of the Seph invasion. Prophet spots the downed craft from a distance and makes a speedy beeline over to investigate. He can only assume its more alien scum and prepares to treat it as so. As Samus crawls out of the wreckage, Prophet grabs the dazed bounty hunter by the neck and tosses her like a ragdoll. Samus staggers to her feet, she begins firing at the fast approaching super soldier who then returns fire and the battle begins.

Outcome: Traditionally, each time Samus begins a new adventure she unfortunately loses all her upgrades and weapons and has to start from scratch. But, for the sake of argument, let’s make her fully powered. Now, both fighters have powerful suits, but the Nanosuit seems tailor-made for extreme combat situations. The advantage Samus has is her unique weapons such as the ice blast and varia gun, while Prophet is stuck with mostly standard earth military hardware.  Still, I think I’d have to give the slight edge to Prophet since he’s simply more agile and overall a little stronger.

Set-up:  Within the walls of a popular space pub, aliens from all corners of the galaxy are unwinding after a long, hard day of conquering and plundering and killing.  A disgruntled Chimera, let’s call him, “Ted” who had a very rough day, sits on a barstool alone, nursing his drink and keeping to himself. Behind him, a rowdy and obnoxious Locust named “Cliffy,” tries his hardest to impress two attractive (in alien terms at least) female patrons with his otherworldly manliness.  After a particular joke he told that he thought to be a laugh riot, Cliffy bumps into the Chimera as he’s taking a sip of his drink, causing it to spill all over himself. Enraged, he curses at the alien and insults his mother. I think you know what this sort of situation leads to.
Outcome: In this particular situation, I think they would cancel each other out. Both alien races aren’t the brightest bulbs in the chandelier and neither of them would back down from a brawl, but both are ruthless scum. The Chimera possesses more exotic weapons, but Locusts have nifty chainsaw bayonets for close-quarters combat. In the end the result would simultaneously be a chainsaw bayonet to the face and an Auger blast to the. Very messy.

Set-up:  Trudging through the thick darkness of the forest, you stumble upon a hidden passage tucked into a gnarled, dying oak. Cautiously, you make your way through a dank tunnel lined with the roots of dead things. There’s a small circle of light at the far end that leads out to a vast field. A wooden sign hammered into the soil nearby reads: Welcome to Hyrule. Suddenly you hear the pounding of horse hooves a mile away.  Knowing that all living things you’ve encountered so far are out to kill you, you fire an arrow at the first sight of the horse and its rider. The horse goes down, you charge towards the enemy, and it’s on like Donkey Kong.

Outcome: The Dark Souls character without question.  Regardless what character class, weapons, magic, armor, he/she has equipped, or what the soul level is, beloved Link is going down.  The Master Sword will shatter into a thousand shards, the Hylian shield will break in two, and his traditional green attire will darken with the stain of elf blood (or whatever race Link is). He has to be worth a few hundred thousand souls at least, right?